Cancer is caused by the dysfunction of intricate signaling pathways, leading to abnormal growth, metastasis, and many other events [1]. The transforming growth factor β (TGF-β) signaling pathway is one of major tumor-regulatory pathways, exerting critical tumor-suppressive functions in the early stages of tumorigenesis [2, 3]. When TGF-β signaling is activated, downstream SMAD2 and SMAD3 proteins are phosphorylated, forming a complex with SMAD4 and then translocating to the nucleus to turn on and off the transcription of a wide range of target genes [4, 5]. SMAD7 inhibits TGF-β signaling by preventing the formation of the SMAD2/SMAD4 complex [6]. It also interacts with activated TGF-β type I receptor and blocks the phosphorylation and activation of SMAD2 [6].

SMAD7 has also been reported to affect tumorigenesis via several other mechanisms. First, in FET-1 colon cancer cells, SMAD7 induces the expression of IκB, thereby repressing NF-κB activity [7]. Secondly, SMAD7 up-regulates MYC expression and WNT signaling via interactions with β-catenin in breast cancer [8] and hepatocellular carcinoma [9]. In addition, SMAD7 inhibits ERK1/2, JNK1/2, and p38 MAPKs under some circumstances related with tumorigenesis, such as erythroid differentiation [10] and chondrocyte differentiation [11].

In 2007, Broderick and co-workers [12] conducted a genome-wide association study and identified three polymorphic variants in intron 3 of SMAD7 (rs4464148, rs4939827, and rs12953717). Furthermore, they found these SMAD7 polymorphisms were associated with CRC adenomas and carcinomas [12]. In a number of other studies these SMAD7 polymorphisms have been associated with the risk of developing multiple cancers, including CRC [12–14], renal [15], and liver cancer [16]. However, other case-control studies have reported that these polymorphisms are not associated with cancer risk, in CRC [17–19], breast cancer [20], and lymphocytic leukemia [21]. These inconsistencies may be partially due to the relatively small sample sizes in each of these studies. Therefore, we performed a large-scale meta-analysis of all eligible published studies to derive a more precise quantitative assessment of the association between SMAD7 polymorphisms and CRC risk.

Figure 1 is a flowchart explaining the study selection process. A total of 62 articles were initially retrieved from PubMed, Web of Science, EBSCO, and Embase electronic databases (last updated in June, 2016). Based on the search criteria, we excluded 33 ineligible records after carefully reviewing the full text and data, leaving 29 articles published between 2007 and 2016 for our quantitative meta-analysis. 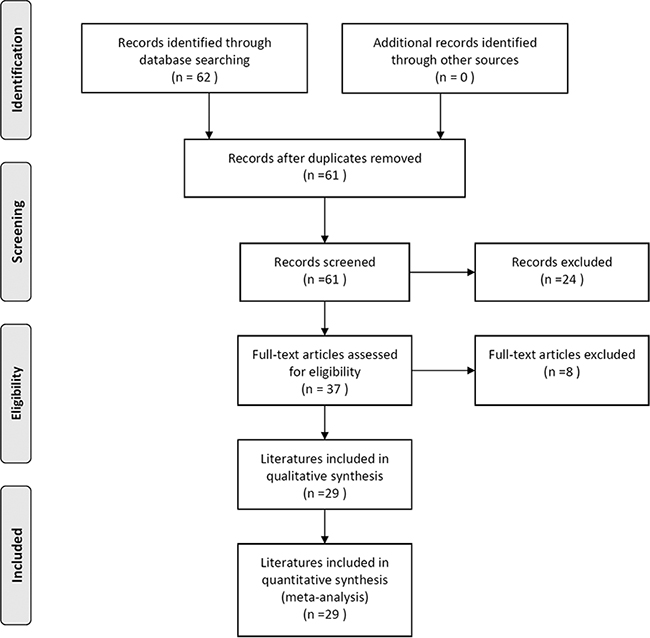 Table 1: Main characteristics of all case-control studies included in the meta-analysis

Table 2: Meta-analysis of the association between SMAD7 polymorphisms and colorectal cancer risk 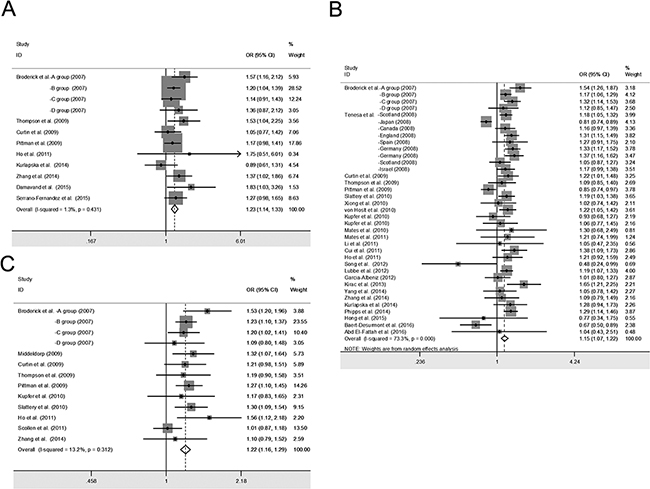 Figure 2: Forest plot of cancer risk associated with the SMAD7 polymorphisms in colorectal cancer studies with recessive genetic models. The squares and horizontal lines correspond to the study-specific odds ratio (OR) and 95% confidence interval (95% CI). The area of the squares reflects the weight (inverse of the variance). A. SMAD7 rs4464148; B. SMAD7 rs4939827; C. SMAD7 rs12953717.

Our results suggested that the influence of individual data sets to the pooled ORs were not significant. Sensitivity analysis showed that no single study qualitatively altered the pooled ORs, providing evidence of the stability of the meta-analysis (Supplementary Figure S1). Funnel plots and Egger’s test were performed to assess publication bias. The results suggested that there was no publication bias for the comparison of rs4464148 allele C vs. allele T (t =0.96, PE = 0.36), rs4939827 allele T vs. allele C (t =-0.76, PE = 0.45), or rs12953717 allele T vs. allele C (t =-0.19, PE = 0.85). The shape of Begg’s funnel plot did not reveal any obvious asymmetry (Supplementary Figure S2).

TGF-β signaling is essential for maintaining homeostasis, cell differentiation, and tumor suppression [3, 24, 25]. Increased production of TGF-β occurs in various tumor types, such as CRC [26]. As one of the key effectors of TGF-β signaling, perturbation of SMAD7 expression has been documented to influence CRC progression [7][27]. Though the functional role of the SMAD7 polymorphisms (rs4464148, rs4939827, and rs12953717) has not yet been interpreted, a number of published epidemiological studies have reported that these polymorphisms are correlated with the risk of developing multiple cancers [12, 28, 29]. However, other studies have reported that these polymorphisms are not associated with cancer development [17–20].

These conflicting studies based their conclusions on small numbers of samples and different detection methods. Therefore ameta-analysis from large-scale samples of all available studies is required to have a more accurate assessment as to whether the SMAD7 polymorphisms are related to risk of developing CRC. Our group has already used meta-analysis to systematically investigate the association between cancer risk and several SNPs involved in TGF-β signaling [30–32]. In this meta-analysis, we found SMAD7 polymorphisms (rs4464148, rs4939827, and rs12953717) in the combined population were all significantly associated with CRC risk. Subgroup analysis according to ethnicity showed that rs4464148 and rs12953717 were significantly associated with the risk of CRC among both Caucasian and Asian population, whereas rs4939827 seems to be a risk polymorphism for CRC only within a Caucasian population. There could be several possibilities to explain such a differential association. First, the difference in association may result from differences in socioeconomic environment, regional dietary habits, and race. Second, the number of rs4939827 in Asian studies is still not as large as desired. In addition, the results from nine studies incorporated in this meta-analysis conflict with each other [14, 19, 22, 33–38]. Therefore, more Asian studies are still needed to clearly evaluate the interactions of SMAD7 rs4939827 and CRC in this ethnic group.

Nonetheless, we also wish to acknowledge the limitations in our study. First, we stratified the studies by ethnic subtypes as Caucasian and Asian. However, we could not assess the association in the African population due to the insufficient number of African studies. Second, further subtle adjusted analysis could be carried out if more detailed individual information was available. Third, we only assessed the association of SMAD7 polymorphisms with CRC risk, because there were not sufficient studies conducted on other cancers.

To date, a large number of studies have focused on the relationship between SMAD7 polymorphisms and cancer. However, controversies remain as whether those polymorphisms indeed associate with increased cancer risks. Our large-scale meta-analysis demonstrated that the C allele of rs4464148, the T allele of rs4939827, and the T allele of rs12953717 were all significantly associated with the increased CRC risk, which may provide a basis for genetic testing in the development of CRC. Consistent with our findings, Noci et al. [40] recently showed that SMAD7 rs4939827 is also associated with cancer survival rate after therapy. Therefore, the identification of SMAD7 polymorphisms may also benefit developing targeted and personalized therapy against CRC. However, more comparative studies are needed to evaluate interactions of SMAD7 polymorphisms and cancer risk in other specific cancer subtypes and ethnic subtypes

We searched for relevant case-control studies using the following words and terms: ‘‘SMAD7’’, “Mothers against decapentaplegic homolog 7”, “rs4464148”, “rs4939827”, “rs12953717”, ‘‘polymorphism’’ or ‘‘variation’’, “susceptibility”, and “tumor” or ‘‘cancer’’ or ‘‘carcinoma’’ or ‘‘neoplasia’’ or “colorectal caner” or “CRC” in PubMed, the Web of Science, EBSCO, and Embase databases. There were no limitations on the language and year for the literature search. The last search was updated on June 30, 2016. References of the retrieved publications were also screened.

Two authors independently screened titles and abstracts to identify relevant studies. Full-text articles of these studies were then carefully read to select eligible studies. Studies had to meet the following inclusion criteria: (a) were a case-control study, nested case-control or a cohort study; (b) evaluated the association between SMAD7 polymorphisms (“rs4464148”, “rs4939827”, and “rs12953717”) and CRC risk; (c) had available genotype frequencies both in cases and controls; (d) the genotype distribution in control groups was in Hardy-Weinberg equilibrium (HWE). (e) In cases of multiple studies with overlapping, redundant data published, only the most recent or complete study was included.

Two authors independently conducted the quality assessment. The Newcastle–Ottawa Scale (NOS) was used to evaluate the study quality, which scored studies by the selection of the groups, the comparability of cases and controls, and the ascertainment of the exposure. We considered a study awarded 0-3, 4-6, or 7-9 as a low-, moderate-, or high-quality study, respectively [23].

Two authors independently selected the relevant articles and extracted the following data: first author’s name, publication date, ethnicity, cancer type, genotyping methods, number of cases and controls, and number of genotypes in case-control groups. In addition, P values according to the HWE in controls were extracted from the included studies.

Our meta-analysis was performed using Stata software (version 12.0; StataCorp LP, College Station, TX, USA). We first calculated the strength of the association between SMAD7 polymorphisms and CRC by odds ratio (OR) corresponding to 95% confidence interval (CI) for different genetic models. Then we stratified the studies by ethnic subtypes and examined the association between SMAD7 polymorphisms and the CRC risk (Table 2). A chi-square-based Q-statistic test [41] was performed to evaluate the between-study heterogeneity of the studies. PH < 0.05 was considered significant for heterogeneity. We also calculated the quantity I2 that represents the percentage of total variation across studies. As a guide, values of I2 less than 25% were considered “low”, values about 50% were considered “moderate”, and values greater than 75% were considered “high”[42]. The fixed effects model was used when there was no heterogeneity of the results of studies; otherwise, the random-effects model was chosen. A pooled OR obtained by meta-analysis was used to give a more reasonable evaluation of the association. The significance of the pooled OR was determined by Z test (PZ ≤0.05 suggests a significant OR). Funnel plots were used to access publication bias by the method of Begg’s test and Egger’s test. A T test was performed to determine the significance of the asymmetry. An asymmetric plot suggested possible publication bias (PE ≥ 0.05 suggests no bias).