Lung cancer is one of the leading causes of cancer-related death in the world [1]. Approximately 80% of lung cancer patients suffer from non-small cell lung cancer (NSCLC), which includes lung adenocarcinoma, lung squamous cell carcinoma and lung large cell carcinoma. Due to the lack of detectable initial symptoms and effective treatment options, the 5-year survival rates remain unsatisfactory for most patients, left the median survival for advanced lung cancer patients being 9-12 months [2, 3]. Recently, molecular targeting therapy has shed much light on the therapy of lung cancer [4, 5]. Therefore, comprehensive investigations of differential gene expression as well as the internal functions and mechanisms will promisingly benefit for identifying reliable earlier markers and therapeutic targets for lung cancer.

WW45 is a core component of conserved Hippo (mammalian sterile 20-like kinase, Mst1 and Mst2) signaling [6], which controls the organ size and suppresses the tumorigensis. Activation of Hippo signaling leads to the recruitment of WW45 by Mst1 and Mst2, which apparently down-regulate cyclin E, Drosophila inhibitor of apoptosis protein 1 (DIAP1) and other proteins, and eventually restricts cell cycle progression and promotes apoptosis [7]. WW45 has been demonstrated as a tumor suppressor in liver cancer, by restraining hepatic oval cell proliferation, liver size and liver tumorigenesis collaborated with Hippo signaling [8]. However, the expression pattern and the functions of WW45 in lung cancer remain unclear. Also, although lots of studies have established WW45 as an important regulator for Hippo signaling, the interaction between WW45 and RASSF1 has demonstrated the Hippo pathway-independent functions of WW45 [9]. Further exploring the Hippo pathway-independent functions of WW45 might benefit the cancer treatment in future.

Hedgehog/Gli1 signaling has been reported to be dysregulated in various cancer types, including lung cancer [10]. Activation of Hedgehog/Gli1 signaling promotes the growth, migration, invasion and drug resistance of the lung cancer cells [11]. The binding of Hedgehog ligand to the receptor Patched1 (Ptc1) activates smoothened (Smo) and the transcriptional activity of Gli1, which up-regulates the expression of a panel of target genes, including Patched1 and FOXM1 [10, 12]. The increase of Gli1 protein level and Gli1 nuclear localization are very common in the lung cancer tissues, suggesting Gli1 might be a promising target for lung cancer treatment [10]. However, the regulation of Gli1 degradation is not fully understood. Here, we examined the expression pattern and the functions of WW45 in lung cancer, and further investigated the regulation of Hedgehog signaling by WW45.

To identify the binding partner of Gli1, we first immunoprecipitated the HA-tagged Gli1 and found out the binding protein using mass spectrum (Figure 1A). The results revealed that WW45 was a potential binding protein of Gli1. Next, we examined the interaction between WW45 and Gli1 by immunoprecipitation, immunofluorescence and GST pull-down. Exogenously expressed WW45 (Flag-WW45) and Gli1 (HA-Gli1) were found to interact with each other (Figure 1B). Moreover, endogenously expressed WW45 bound Gli1 (Figure 1C). In addition, in the GST pull-down assay, the fusion protein GST-WW45 was shown to interact with endogenous Gli1 (Figure 1D). Furthermore, the subcellullar localization analysis using immunofluorescence staining demonstrated the co-localization between WW45 and Gli1 (Figure 1E). These results confirmed that WW45 was a binding protein of Gli1. 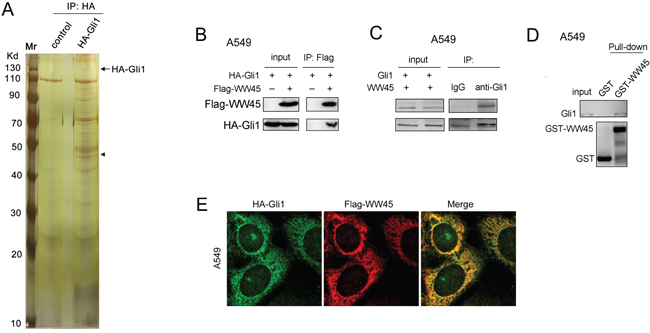 Figure 1: WW45 interacted with Gli1. A. Identifying the binding protein of Gli1. The HA-Gli1 plasmid was transfected into HEK293T cells. The immunoprecipitation was performed. The binding protein of Gli1 was separated by SDS-PAGE and identified by mass spectrum. B. Ectopically expressed WW45 (Flag-WW45) and Gli1 (HA-Gli1) interacted with each other in A549 cells. C. Endogenous WW45 and Gli1 formed a complex in A549 cells. D. GST pull-down assay demonstrated that Gli1 bind to GST-WW45. E. The immunofluorescence staining assay demonstrated the co-localization of Flag-WW45 and HA-Gli1. Green, HA-Gli1; Red, Flag-WW45. Details about immunofluorescence staining were described in the part of “Materials and Methods”.

WW45 inhibited Hedgehog signaling by promoting the degradation of Gli1 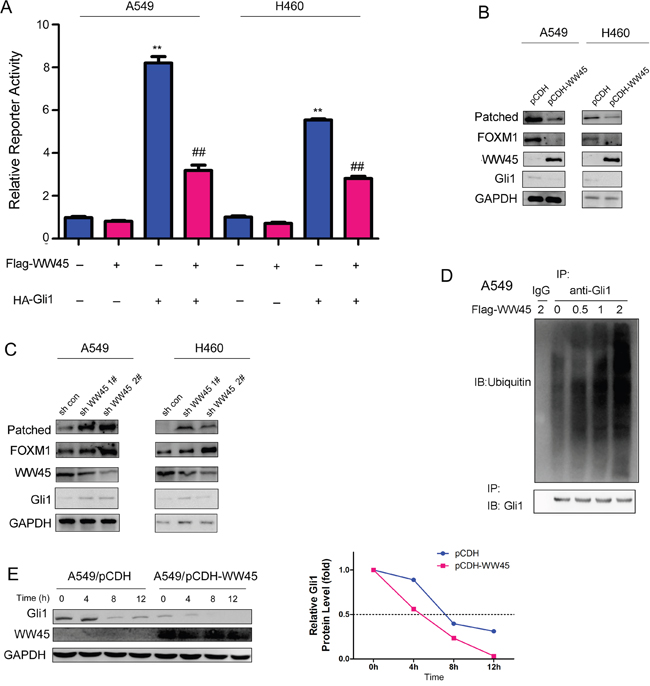 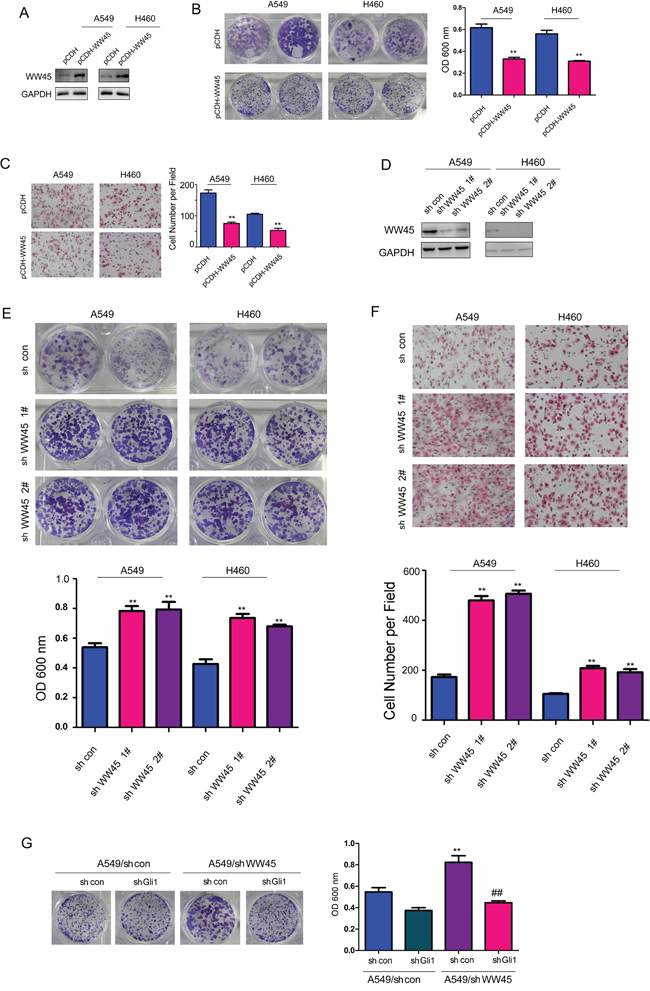 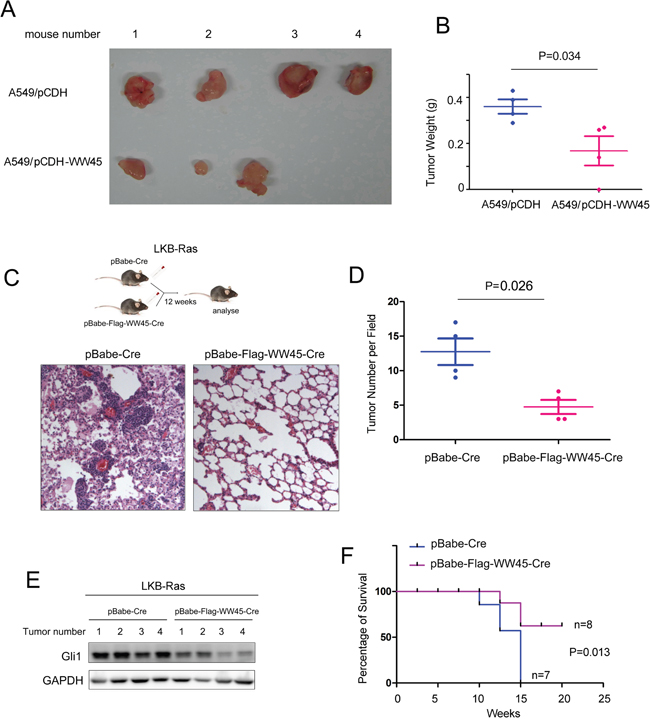 To evaluate the potential roles of WW45 in the tumorigenesis of lung cancer, its expression in clinical lung cancer tissues and cell lines were examined using quantitative real-time PCR, western blot analysis and immunohistochemistry. As shown in Figure 5A, the mRNA level of WW45 was significantly decreased in lung cancer tissues compared with the paired non-cancerous tissues (Figure 5A, P<0.05). Also, the protein expression of WW45 was down-regulated in cancerous tissues assessed by immunohistochemistry and western blot analysis (Figure 5B–5C). Moreover, WW45 expression was decreased in four lung cancer cell lines (A549, H23, H460 and H520) when compared to the normal human bronchial epithelial cell line, Beas-2B (Figure 5D). Most importantly, the expression of WW45 was inversely correlated with the expression of Gli1 (Figure 5C–5D). These data further demonstrated that down-regulation of WW45 promoted the carcinogenesis of lung cancer by activating Hedgehog signaling. 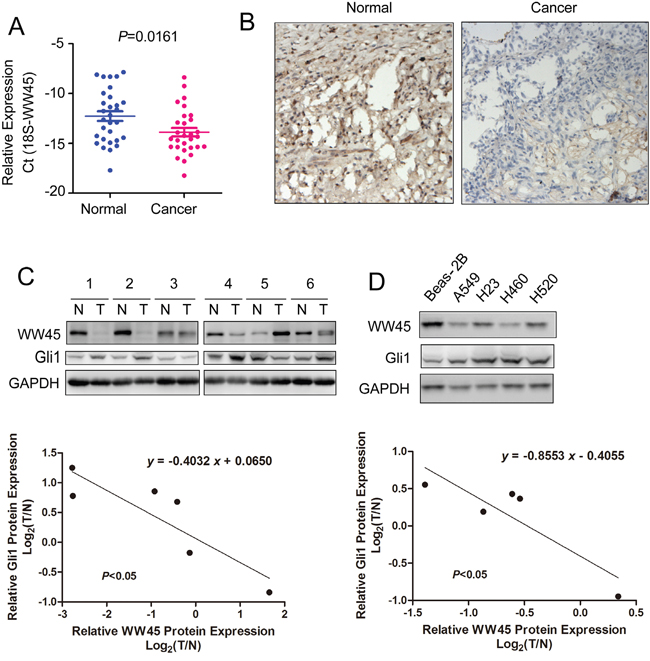 WW45 was initially identified as a binding partner of mammalian sterile 20-like kinase 1 (Mst1), and promoted the Mst1-mediated apoptosis [13]. Salvador, the homolog of human WW45 in Drosophila, has also been reported to promote both cell cycle exit and apoptosis [14]. These studies confirmed the negative roles of WW45 in the Hippo/YAP signaling. However, whether WW45 was involved in the regulation of other signal pathways remains largely unknown. In this study, we have found that WW45 was dramatically down-regulated in clinical lung cancer tissues and established cell lines, and WW45 inhibited the activation of Hedgehog/Gli1 signaling by promoting the ubiquitination of Gli1. Most importantly, over-expression of WW45 not only inhibited the tumorigenecity of lung cancer cells, but also impaired the de novo tumorigenesis of lung cancer driven by loss of LKB1 and mutated Kras (Kras G12D). This study revealed the novel mechanism for the suppressive roles of WW45 in the cancer progression by negatively regulating Hedgehog/Gli1 signaling.

Hedgehog/Gli1 signaling promotes the growth, migration and metastasis of lung cancer [15, 16]. Cyclopamine, the inhibitor for Smo, has shown anti-cancer activity [17]. In this study, we found that over-expression of WW45 promoted the ubiquitination and degradation of Gli1. Previous studies have shown beta-Trcp was an E3 ligase of Gli1 [18]. Although we did not examine the interaction between beta-Trcp and WW45, it is possible that WW45 might promote the ubiquitination of Gli1 by enhancing the interaction between Gli1 and beta-Trcp.

A total of 30 lung cancer tissues and paired non-cancerous tissues were obtained from patients who received surgery at Shanghai Chest Hospital, Shanghai Jiao Tong University. The written informed consent was obtained from the patients. This study was approved by the ethics committee of the hospital. The diagnosis of lung cancer was histologically confirmed and none of the patients received preoperative therapy. All of the patients agreed with this study. Cancer tissues and paired non-cancerous tissues were stored at −80°C in a freezer.

The coding sequence of WW45 was inserted into the expression vector pGEX-4T-1. The fusion protein GST-WW45 was purified. The whole cell lysates of A549 were prepared in 50mM Tris-Cl (pH7.5), 150mM NaCl, 0.1% NP40 and protease inhibitor cocktail. 5μg GST-WW45 fusion protein and 800μg cell lysates were incubated at 4°C for 3 hours. 20μl of glutathione-Sepharose-4B beads were added to the samples and incubated at 4°C for 1 hour to capture the GST fusion proteins. After washing with lysis buffer three times, the proteins were eluted in Laemmli buffer and analyzed by SDS-PAGE.

The HA-Gli1 plasmid was transfected into HEK293T cells. The immunoprecipitation was performed. The binding protein of Gli1 was separated by SDS-PAGE. The gel was stained with silver solution. The differential bands were collected and identified by mass spectrum.

A549 cells were transfected with WW45 expression plasmid. 48 hours later, cells were treated with MG132 for 8 hours. Then cells were lysed and the immunoprecipitation was performed using anti-Gli1 antibody. The ubiquitination was examined using the anti-ubiquitin antibody.

24 hours after plating on cover slides, these cells were washed three times with ice-cold PBS and fixed in ice-cold methanol for 10 minutes. Cells were blocked with 3% BSA in PBST (PBS with 0.5% Tween-20) and then stained with primary antibodies diluted in 3% BSA, PBST overnight at 4°C. After washing four times in PBST, cells were incubated for 1 hour with the secondary antibody in 3% BSA, PBST at a 1:1000 dilution. Fluorescence was monitored by an inverted confocal laser microscopy.

Knocking down the expression of WW45

Cells were seeded in 12-well plates with the medium containing 10% FBS. Medium was changed every other day. Ten days later, after removing the medium, the cells were fixed with 4% formalin and then stained with 0.5% crystal violet solution in 20% methanol. After staining for 20 min, the cells were washed twice with PBS and photographed. Cells were resolved with 1% SDS solution. The absorbance at 600nm was measured using a microplate reader.

Cell migration was examined using Boyden chamber. Cells (2×105) suspended in 50μl medium containing 1% FBS were placed in the upper chamber, and the lower chamber was loaded with 150μl medium containing 10% FBS acting as the chemoattractant. 6 hours later, cells migrated to the lower surface of filters was detected with traditional hematoxylin and eosin (H&E) staining. The experiments were repeated for thrice. Five random visual fields were counted for each sample and the average was determined.

Transfections were performed using Lipofectamine® 2000 (Invitrogene) as per the manufacturer’s instructions.

The control cells (A549/pCMVTag2B) and WW45 over-expressing A549 cells (A549/Flag-WW45) were injected into each flank of 4-week-old BALB/cA-nu/nu male nude mice. Four nude mice were used in this assay. Six weeks later, the mice were killed and the tumors were weighted and photographed.

Mice were housed and treated after being approved by the Institutional Animal Care and Use Committee of Shanghai Chest Hospital, Shanghai Jiao Tong University. KrasG12D and Lkb1L/L mice were obtained from Jackson Lab (Koch Institute for Integrative Cancer Research, Cambridge, MA). Lung cancer mouse models with KrasG12D/Lkb1L/L mice were generated by crossing KrasG12D and Lkb1L/L mice. The coding sequences for WW45 and Cre were inserted into the pBabe vector. Each mouse was treated with 2×106 PFU virus via nasal inhalation. The lung tissues were analyzed 12 weeks later after virus treatment.

The lung tissues of the mice were isolated and fixed in 4% formalin. Lung lobes were embedded in paraffin, sectioned, and stained with H&E. Tumor number was counted under microscope.