Incretin-based therapies by using dipeptidyl peptidase-4 (DPP-4) inhibitors or glucagon-like peptide-1 receptor (GLP-1R) agonists have become a mainstay in the treatment of T2DM. However, the cancer risk associated with these drugs remains to be clarified [19]. Sitagliptin was the first DPP-4 inhibitor approved for clinical use in 2006 and it was approved for reimbursement by the Taiwan’s Bureau of National Health Insurance (NHI) on March 1, 2009 [19]. Sitagliptin is probably the most commonly used incretin-based therapy but its association with prostate cancer has not been extensively explored. A pooled analysis of 25 clinical studies including 7,726 users and 6,885 non-sitagliptin treated patients with study durations of 12 weeks to 2 years showed that the incidence of prostate cancer was 0.11 and 0.07 per 100 patient-years, respectively [20]. However, the incidence for metastatic prostate cancer or stage III prostate cancer were both lower in the sitagliptin group (0.00 vs. 0.02 per 100 patient-years) [20]. Because of the small numbers of incident cancer, statistical analyses were not performed in the study.

The present study aimed at evaluating whether sitagliptin use in male patients with T2DM would affect the risk of prostate cancer by using the Taiwan’s NHI reimbursement database. Other incretins (i.e., saxagliptin, vildagliptin and linagliptin for DPP-4 inhibitors; and exenatide and liraglutide for GLP-1R agonists) currently available in Taiwan were not evaluated because they were not approved until after 2009 and had not been used commonly during the study period. A new-user design was applied to minimize the potential “prevalent user bias” [21]. To reduce the “immortal time bias” (the initial period of follow-up during which the outcome can not occur) [22], patients should have been prescribed antidiabetic drugs for at least two times, and those who were followed up for a short period of time (i.e., <180 days) were excluded. To address the imbalance in characteristics associated with treatment allocation in non-random observational studies, Cox regression models were created by incorporation with the inverse probability of treatment weighting (IPTW) using propensity score (PS) [23] and analyses were also conducted in a 1:1 matched cohort [24].

Table 1 compares the characteristics between ever and never users of sitagliptin in the original cohort and the matched cohort, respectively. In the original cohort, except for stroke, dipyridamole and examination of prostate-specific antigen (PSA), all variables differed significantly. Ever users were younger in age, had longer duration of diabetes, and characterized by higher proportions of hypertension, nephropathy, ischemic heart disease, peripheral arterial disease, eye disease, obesity, dyslipidemia and acute pancreatitis. On the other hand, lower proportions of chronic obstructive pulmonary disease, and benign prostatic hyperplasia were observed in ever users. Ever users were more likely to use other medications. Among the covariates, 19 of the 28 had values of standardized difference >10%. In the matched cohort, only diabetes duration, and use of metformin and rosiglitazone were different significantly. However, while examining the standardized differences, none of them had a value >10%.

Table 1: Comparison of characteristics between sitagliptin never and ever users in the original cohort and the matched cohort, respectively

*Age and diabetes duration are expressed as mean and standard deviation

Table 2 shows the incidences and hazard ratios of prostate cancer with regards to sitagliptin exposure. During follow-up, 84 ever users and 2549 never users in the original cohort developed prostate cancer, with respective incidence of 140.74 and 240.17 per 100,000 person-years, and an overall hazard ratio of 0.613 (95% confidence interval: 0.493-0.763). Although the hazard ratios were not significant for the first and second tertiles of cumulative duration and cumulative dose, the risk was significantly reduced in the third tertiles. Analyses conducted in the matched cohort showed similar results.

Table 3 shows the overall hazard ratios comparing ever to never users of sitagliptin in sensitivity analyses after excluding patients with various clinical conditions in the original cohort. A significantly reduced risk was observed in all analyses.

Table 3: Sensitivity analyses estimating hazard ratios for prostate cancer for ever versus never users of sitagliptin in the original cohort

It is interesting that such a reduced risk of prostate cancer related to incretin-based therapies is also observed in a recent clinical trial on liraglutide, a GLP-1R agonist, showing a hazard ratio (95% confidence interval) of 0.54 (0.34-0.88) [25]. Though with a slightly smaller magnitude of risk reduction, the overall hazard ratio (95% confidence interval) of 0.613 (0.493-0.763) estimated for sitagliptin in the present study (Table 2) was very close to the observed hazard ratio for liraglutide in the clinical trial [25].

Recent studies from Japan may provide some explanations for the potential mechanisms. The Japanese investigators showed that GLP-1R is expressed in human prostate cancer tissue and exendin-4 (a GLP-1R agonist) significantly decreased the proliferation of prostate cancer cells that expressed GLP-1R [26, 27]. Such antiproliferative effect of exendin-4 on prostate cancer was not via androgen receptor, but through the inhibition of extracellular signal–regulated kinase-mitogen-activated protein kinase (ERK-MAPK) phosphorylation via GLP-1R [26]. This inhibitory effect on ERK-MAPK was mediated by the cyclic adenosine 3′,5′-monophosphate-protein kinase A pathway and was not dependent on adenosine monophosphate activated protein kinase activation or Akt phosphorylation [26]. In an in vivo study, exendin-4 also attenuated the growth of prostate cancer cells transplanted to athymic mice via the inhibition of ERK-MAPK activation [26]. In humans, administration of sitagliptin 50 mg per day for 3 days significantly increased active GLP-1 level by 2.5–fold [28]. Therefore, sitagliptin may exert an anti-cancer effect on the prostate by increasing the acitve GLP-1 levels.

On the other hand, DPP-4 may inhibit the malignant phenotype of prostate cancer cells via the blockade of the signaling pathway of basic fibroblast growth factor [29] and the serum activity of DPP-4 is reduced in patients with metastatic prostate cancer [30]. Therefore, inhibition of DPP-4 may potentially trigger prostate cancer cell growth and metastasis, as shown in an in vitro and in vivo metastasis study [31]. The dual effects of DPP-4 inhibition by sitagliptin may explain the slightly smaller magnitude of risk reduction for sitagliptin (Table 2) than that observed in the liraglutide trial [25].

Our previous analyses of the same database suggested that sitagliptin may increase the risk of acute pancreatitis [32], pancreatic cancer [33] and thyroid cancer [34]. Competing risk due to the development of other cancers and/or acute pancreatitis related to sitagliptin exposure during follow-up would not affect the finding (Table 3). Furthermore, detection bias due to PSA screening could not explain the reduced risk related to sitagliptin because the examination of PSA did not differ significantly between ever and never users (Table 1) and the finding was not changed after excluding patients who had been screened by PSA (Table 3).

There are several strengths in this study. First, a special request was made to include longitudinal data of all patients, covering a period from 1996 when the NHI database was available. Second, the study enrolled a large sample size representing the whole nation. Third, information bias related to self-reporting could be reduced by the use of medical records. Fourth, because the NHI covers almost the entire population, the results could be readily generalized to the whole population.

There are some limitations. First, we did not have biochemical data such as blood levels of glucose and lipid profiles for evaluating their impacts. Second, this study could not evaluate the effects of other DPP-4 inhibitors and GLP-1R agonists because of the limited sample sizes of users of these medications during the study period. Third, it was not possible to fully adjust for potential confounders such as obesity, smoking, alcohol drinking, family history, life-style, dietary factors, hormonal profiles and genetic parameters.

In summary, this study supports an overall reduced risk of prostate cancer in male patients with T2DM who have been treated with sitagliptin. The risk is significantly reduced when the cumulative duration is >12.7 months or the cumulative dose >33,600 mg.

This study was approved by an ethic review board of the National Health Research Institutes (NHRI, approval number 99274). The compulsory and universal health care system of NHI has been implemented since March 1995. It covers more than 99% of the Taiwanese population and has contracts with over 98% of the hospitals nationwide. Detailed records including outpatient visits, emergency department visits, and hospital admission are kept in the database, and the information of principal and secondary diagnostic codes, prescription orders, and claimed expenses can be retrieved. According to local regulations, written informed consent was not required because the identification information had already been scrambled prior to the release of the database.

Figure 1 shows the procedures followed in creating the cohort of newly diagnosed T2DM patients with onset age ≥25 years for the study. The NHRI created a cohort of 120,000 newly diagnosed diabetic patients in each calendar year for a 12-year period from 1999 to 2010. The longitudinal reimbursement records of these patients from 1996 to 2011 can be provided for academic research after approval. A patient should not have a diagnosis of diabetes in the preceding years when he/she was randomly selected into the cohort for each specific year. The definition of diabetes was based on one of the following two criteria: 1) Diagnosis of diabetes during an admission to the hospital or having been prescribed with antidiabetic drugs during hospitalization; or 2) In an outpatient setting within one year, a patient has been diagnosed as having diabetes for two or more times, or diagnosed as having diabetes for one time plus prescribed with antidiabetic drugs for one time. As a result, a total of 1,440,000 patients with newly diagnosed diabetes were available within these 12 years. 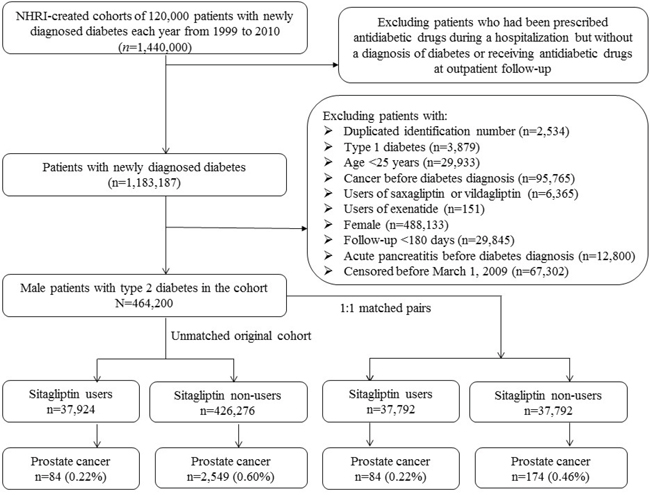 Some patients might have been given insulin or oral antidiabetic drugs temporarily during hospitalization for some medical conditions but they might not be real cases of diabetes. Therefore, patients who were recruited in the yearly established cohorts based on the first criterion but did not have records of follow-up afterward with a diagnosis of diabetes or having been prescribed antidiabetic drugs at the outpatient clinics were excluded. This resulted in a sample size of 1,183,187 patients.

After further exclusion of ineligible patients as shown in the figure (linagliptin and liraglutide were not available in Taiwan during the study period), there were 464,200 patients left. Among them, 37,924 had been prescribed sitagliptin (ever users) and 426,276 had never been treated with sitagliptin (never users).

The above characteristics of sitagliptin never users and ever users were compared by Student’s t test for age and diabetes duration and by Chi-square test for the others. The crude incidence density of prostate cancer was calculated for sitagliptin ever users and never users and for the tertiles of cumulative duration (months) and cumulative dose (mg). The numerator for the incidence was the number of patients with incident prostate cancer during follow-up, and the denominator was the person-years of follow-up. Follow-up ended on December 31, 2011, at the time of a new diagnosis of prostate cancer, or on the date of the last reimbursement record.

Logistic regression was used to create PS from all the covariate listed in Table 1. To obtained unbiased estimates, Cox regression models were created by incorporation with IPTW using PS as recommended by Austin [23].

To avoid the imbalance of characteristics associated with treatment allocation in non-random observational studies, a 1:1 matched-pair sample based on 8 digits of PS was also used for analyses, with calculation of standardized difference for each characteristic. A standardized difference >10% suggests a potential residual confounding. These methods have been adopted and described in detail in our previous studies [34–37].

The study was supported by the Ministry of Science and Technology (MOST 103-2314-B-002-187-MY3) of Taiwan. The funders had no role in study design, data collection and analysis, decision to publish, or preparation of the manuscript.