β-Hydroxybutyrate, a ketone body that is used as an energy source in organs such as the brain, muscle, and heart when blood glucose is low, is produced by fatty acid oxidation in the liver under the fasting state. Endoplasmic reticulum (ER) stress is linked with the generation of intracellular reactive oxygen species and the accumulation of misfolded protein in the ER. ER stress is known to induce the NOD-like receptor protein 3 inflammasome, which mediates activation of the proinflammatory cytokine interleukin-1β, whose maturation is caspase-1-dependent. We investigated whether β-hydroxybutyrate modulates ER stress, inflammasome formation, and insulin signaling. Sprague Dawley rats (6 and 24 months of age) that were starved for 3 d and rats treated with β-hydroxybutyrate (200 mg·kg-1·d-1 i.p., for 5 d) were used for in vivo investigations, whereas human hepatoma HepG2 cells were used for in vitro studies. Overexpression of AMPK in cultured cells was performed to elucidate the molecular mechanism. The starvation resulted in increased serum β-hydroxybutyrate levels with decreased ER stress (PERK, IRE1, and ATF6α) and inflammasome (ASC, caspase-1, and NLRP3) formation compared with non-fasted 24-month-old rats. In addition, β-hydroxybutyrate suppressed the increase of ER stress- and inflammasome-related marker proteins. Furthermore, β-hydroxybutyrate treatment increased the expression of manganese superoxide dismutase and catalase via the AMP-activated protein kinase-forkhead box protein O3α transcription factor pathway both in vivo and in vitro. The significance of the current study was the discovery of the potential therapeutic role of β-hydroxybutyrate in suppressing ER-stress-induced inflammasome formation.

Ketone bodies are small lipid-derived molecules that serve as a circulating energy source for tissues in times of fasting or prolonged exercise [1]. The ketone bodies refer to three molecules: acetoacetate, β-hydroxybutyrate, and acetone. The majority of the ketone bodies are produced in the liver, although smaller amounts may be produced in other tissues [2]. In the liver, the acetyl-CoA generated from fatty acid oxidation is diverted away from the tricarboxylic acid cycle and converted into β-hydroxybutyrate through ketogenesis in the mitochondria [3].

β-Hydroxybutyrate production is regulated by the enzyme 3-hydroxy-3-methylglutaryl-CoA synthase (HMGCS2) in the mitochondria [4]. Most of the acetoacetate molecules are metabolized by β-hydroxybutyrate dehydrogenase to β-hydroxybutyrate [5]. Many studies have shown that ketosis causes accelerated aging. Thus, the increased ketone levels in the body cause age-related metabolic diseases [1]. However, some studies have shown that ketone bodies in low concentration have an anti-inflammatory effect. β-Hydroxybutyrate increases both manganese superoxide dismutase (MnSOD) and forkhead O bax transcription factor3 (FOXO3) which are antioxidant genes [6]. Ketone bodies also mediate the neuroprotective effects of calorie restriction (CR) [7]. In humans, the basal serum level of β-hydroxybutyrate is in the low micromolar range, but begins to rise to 1-2 mM after 2 d of fasting [2] and 6-8 mM with prolonged starvation [8].

The endoplasmic reticulum (ER) is a multifunctional organelle that co-ordinates protein folding, lipid biosynthesis, and calcium storage and release. Perturbations that disrupt ER homeostasis lead to the misfolding of proteins, ER stress, and upregulation of the ER stress response pathway, which is also known as the unfolded protein response (UPR) [9]. ER stress could be activated in the aging process through increased oxidative stress, the accumulation of harmful protein modifications, the misfolding and aggregation of proteins, and impairments in protein synthesis [10]. In addition, the protein cleansing system becomes impaired during aging as a result of the reduction in autophagic and proteasomal degradation [11]. In a recent study, ER stress inducers, including tunicamycin and thapsigargin, activated the NOD-like receptor protein 3 (NLRP3) inflammasome in human and murine macrophages [12]. The NLRP3 inflammasome is a molecular platform that activates proinflammatory cytokines such as interleukin-1β (IL-1β).

AMP-activated protein kinase (AMPK) is a sensor of the cellular energy level. AMPK increases the transcription activity of forkhead box protein O (FOXO) transcription factors, perhaps via direct phosphorylation, leading to resistance to oxidative stress and the extension of longevity [13]. FOXO3a can reduce the level of cellular oxidative stress by directly increasing the mRNA and protein levels of MnSOD and catalase [14].

ER stress activates the NLRP3 inflammasome that is associated with the maturation of proinflammatory cytokines. Therefore, we measured the proinflammatory cytokine (IL-6 and IL-1β) levels in 3-day-starved aged rats. These cytokines have a central role in the pathology of chronic inflammatory diseases. The results showed that IL-1β increased with age, and this increase was significantly suppressed by the starvation (Figure 1A). These data suggest the possibility of a relation between acute starvation and the inflammasome.

The inflammasome complex is composed of NLRP3, caspase-1, and apoptosis-associated speck-like protein containing a caspase activation and recruitment domain (ASC). The oligomerization of NLRP3 and the recruitment of ASC and procaspase-1 trigger the autoactivation of caspase-1, which in turn cleaves other cytosolic targets, including the proinflammatory cytokines IL-1β and IL-18 [15]. To investigate inflammasome formation induced by acute starvation, the levels of caspase-1, ASC, NLRP3, IL-1β, and IL-18 were examined. As shown in Figure 1B, the levels of each of these biomolecules were increased in old rats, whereas their formation was decreased by starvation.

On the other hand, to examine the metabolic changes caused by acute starvation in aged rats, the β-hydroxybutyrate, triglyceride (TG), and non-esterified fatty acid levels were measured. The TG level was increased during aging, but was decreased by starvation. In contrast, the ketone body increased in the starvation group (Figure 1F). To further examine the β-hydroxybutyrate effects on ER stress and inflammasome formation, the next experiments were conducted. 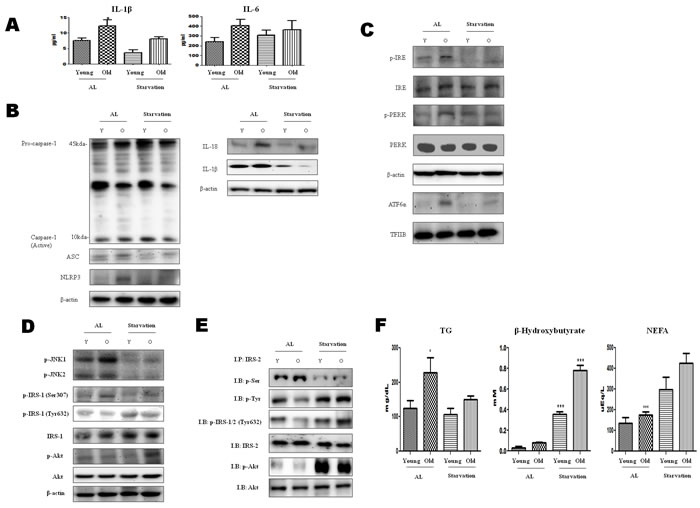 In advance, β-hydroxybutyrate suppressed the inflammasome by reducing ER stress. AMPK is widely recognized to be a key regulator of fatty acid and glucose homeostasis. It is also reported to possess protective effects against ER stress [17]. We next investigated whether β-hydroxybutyrate activates AMPK. The result showed that β-hydroxybutyrate significantly increased the phosphorylation of AMPK (Figure 2D). As FOXO3 transcription factors are known to be increased by AMPK, our findings indicate that FOXO3 activation is involved in oxidative stress. MnSOD and catalase, two major antioxidant enzymes that play a role in the protection against oxidative stress, were also found to be increased by the β-hydroxybutyrate treatment. 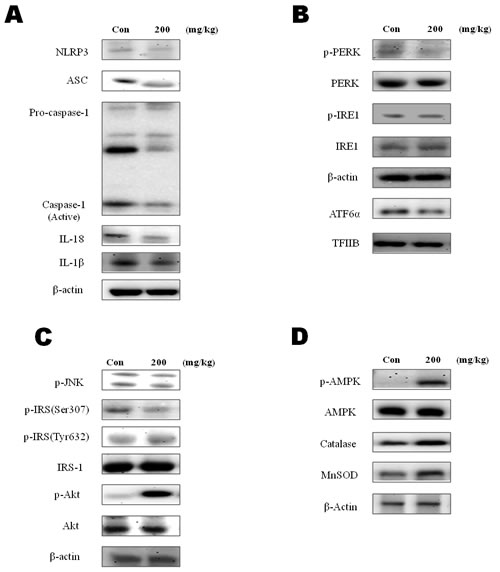 β-Hydroxybutyrate suppressed the inflammasome and ER stress via AMPK activation

AMPK has been shown to play a critical role in controlling the systemic energy balance and metabolism [20]. Furthermore, AMPK may be a physiological regulator that maintains ER homeostasis [21]. To confirm the direct involvement of AMPK activation in ER stress amelioration by β-hydroxybutyrate, we examined the effect of β-hydroxybutyrate on ER stress. For these experiments, transient transfection with expression vectors for wild-type AMPK was performed. AMPK caused the reduction of ER stress markers, which were also further reduced by treatment with β-hydroxybutyrate (Figure 4A). 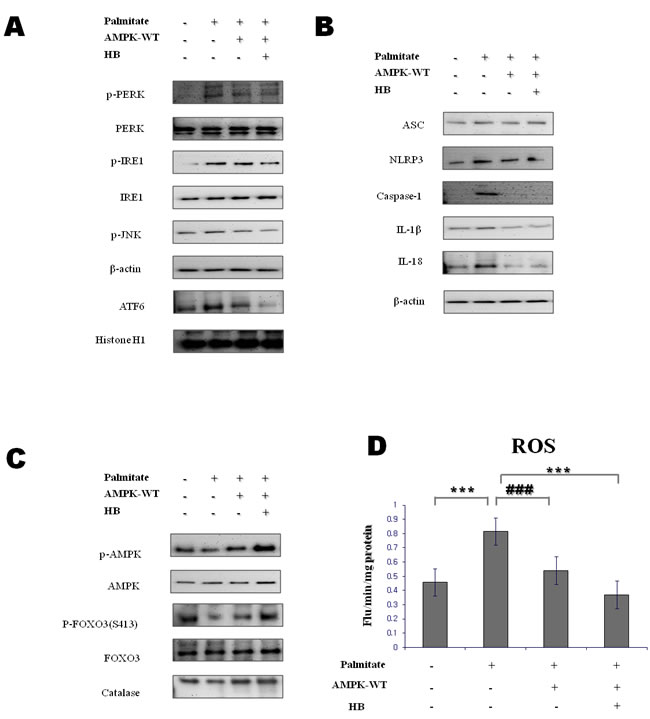 β-Hydroxybutyrate, which is increased after fasting and CR, has beneficial effects [6]. Ketogenesis begins within 24 h of fasting, through gluconeogenesis [24]. Ketogenic diets, which are used in certain weight reduction programs and have been used to treat patients with refractory epilepsy, contain at least 50% of calories as fat [3]. Mild ketosis is used as a treatment for Alzheimer’s disease. Recent study showed that CR increased the β-hydroxybutyrate concentration as compared with feeding ad libitum [6].

Diabetic ketoacidosis and the hyperglycemic hyperosmolar non-ketotic state are two serious metabolic complications of diabetes [25]. Likewise, ketone bodies such as β-hydroxybutyrate can be toxic when present at very high concentrations in individuals with diseases such as type I diabetes. On the other hand, β-hydroxybutyrate helps to protect cells from oxidative stress at lower concentrations [6]. It also appears to have broadly neuroprotective effects in these and other neurodegenerative disease models [26]. However, β-hydroxybutyrate inhibited NLRP3 inflammasome in macrophages such as immune response [27].

Proteins that are unable to fold correctly cause ER stress and activate the UPR [28]. Additionally, ER stress activates the NLRP3 inflammasome [29], a molecular platform to trigger the innate immune defense through the maturation of proinflammatory cytokines. Upon detection of a cellular stress, such as K+ efflux, lysosomal rupture, and ROS, NLRP3 recruits ASC and procaspase-1, which results in caspase-1 activation and the processing of cytoplasmic targets, including IL-1β and IL-18 [30]. Inflammasome activation has been linked to human diseases such as type 2 diabetes [31] and obesity [32]. The present study focused on the inhibitory effects of β-hydroxybutyrate on ER-stress-induced inflammasome formation.

ER stress has also emerged as an important player in hepatic insulin resistance, leading to the development of hyperglycemia and hyperlipidemia. ER stress can inhibit insulin signaling. IRE1 activation (an ER stress marker) leads to the phosphorylation of JNK, which impairs insulin signaling by phosphorylating IRS-1 Ser 307 [33]. In this study, ER stress and p-JNK were increased in aged rats, but were reduced by starvation (Figure 1). These observations suggest that acute starvation ameliorates age-related inflammation through the inhibition of ER stress and the inflammasome.

Specific pathogen-free (SPF) male Sprague Dawley (SD) rats were obtained from Samtako (Osan, Korea) and were fed a standard laboratory diet (Superfeed Co., Wonju, Kangwon, Korea) ad libitum. The animals at 6 and 24 months of age were used as young and old rats, respectively. There were 6 rats in each experimental group. The ad libitum (AL)-fed group had free access to both food intake of their AL-fed littermates and the starvation practiced for 3 d. To estimate the effects of β-hydroxybutyrate on ER stress and inflammasome formation, β-hydroxybutyrate was injected once per day for 5 d at a dose of 200 mg·kg-1·d-1 to 8-week-old SD rats. This concentration was selected based on a previous study of the regulation of sympathetic nervous system activity by ketone bodies [37]. All animal studies were designed by the Aging Tissue Bank and approved by the Institutional Animal Care Committee of Pusan National University. We followed the guidelines for animal experiments issued by Pusan National University (Approval Number PNU-2012-0088).

The human hepatoma cell line (HepG2) was obtained from the American Type Culture Collection (ATCC, Manassas, VA, USA). The cells were grown in Dulbecco’s modified Eagle’s medium (DMEM; Nissui, Tokyo, Japan) containing 2 mM l-glutamine, 100 mg/mL streptomycin, 2.5 mg/L amphotericin B, and 10% heat-inactivated fetal bovine serum (FBS). The cells were maintained at 37°C in a humidified atmosphere containing 5% CO2. Cells that had been in culture for more than 3 months were not used for the experiments; instead, new cells were obtained from frozen stock. Cells at the exponential phase were used for all experiments.

Blood samples were collected after the animals in each group had been sacrificed. Commercial kits were used to measure the concentration of triglyceride (Sinyang Co, Korea) and FFAs in the serum. The serum FFA level was determined using the assay kit SICDIA NEFAZYME (Sinyang Co, Korea). IL-1β and IL-6 were measured using the Luminex multiplex cytokine system. β-Hydroxybutyrate concentrations were determined using a β-hydroxybutyrate detection kit (Stanbio Laboratory, USA).

To quantify intracellular RS generation, HepG2 cells were seeded in a 96-well plate. One day later, the medium was changed to fresh serum-free medium. HepG2 cells were transfected with lentiviral particle wild-type AMPK. After 12 h, cells were treated with 1 mM β-hydroxybutyrate, followed by 250 μM palmitate for 1 h, and medium was replaced with fresh serum free medium containing DCFDA (f.c. 2.5 µM). Measurement of the fluorescence intensity of DCF was performed every 5 min for 30 min using a microplate fluorescence reader TECAN (Salzburg, Austria) using excitation and emission wavelengths of 485 and 535 nm, respectively.

This work was supported by a National Research Foundation of Korea (NRF) grant funded by the Korea Government (MSIP) (No. 2009-0083538). We also take this opportunity to thank the Aging Tissue Bank (Busan, Korea) for supplying research materials.