*These authors have contributed equally to this study

Background: Germline alterations in the proapoptotic protein Bcl-2-like 11 (BIM) can have a crucial role in diverse tumors. To determine the clinical utility of detecting BIM deletion polymorphisms (par4226 bp/ par363 bp) in EGFR positive non-small-cell lung cancer (NSCLC) we examined the outcomes of patients with and without BIM alterations.

Methods: We studied 89 NSCLC Hispanic patients with EGFR mutation who were treated with erlotinib between January 2009 and November 2014. BIM deletion polymorphisms (BIM-del) was analyzed by PCR in formalin-fixed paraffin-embedded (FFPE) tissues of tumor biopsies. We retrospectively analyzed clinical characteristics, response rate, toxicity, and outcomes among patients with and without BIM-del.

Conclusions: The incidence of BIM-del found in Hispanic patients is similar to that previously described in Asia. This alteration is associated with a poor clinical response to erlotinib and represents an independent prognostic factor for patients who had NSCLC with an EGFR mutation.

Lung cancer is the leading cause of cancer related death in the developed countries and in Latin America, and non–small-cell lung cancer (NSCLC) accounts for most cases [1, 2]. Activating mutations in the epidermal growth factor receptor (EGFR) as a therapeutic target for NSCLC has changed the course of the disease [3]. The frequency of EGFR mutations vary according to the population; in Caucasians EGFR mutations occurs in 10 to 15%, whereas in East Asia and Latin America these are more frequent occurring in 30 to 50% of lung adenocarcinoma patients [4–6]. EGFR tyrosine kinase inhibitors (TKIs), such as gefitinib, erlotinib, and afatinib, are widely used to treat advanced NSCLC harboring an EGFR mutation. Such drugs have improved the progression free survival (PFS), overall survival (OS) and quality of life compared with first line platinum-based doublet chemotherapy [7–10]. However, drug resistance invariably emerged and most patients develop recurrence within 10 to 16 months after initial EGFR-TKI treatment (acquired resistance) [11]. Several mechanisms of secondary resistance have been revealed, including: EGFR T790M mutation (the most frequent), mesenchymal-epithelial transition, MET amplification, phosphatidylinositol-4-5-bisphosphate 3-kinase mutations (PI3K) and small-cell lung cancer transformation [12–15]. Nevertheless, around 30% of patients with EGFR-activating mutations do not show objective response (OR) to EGFR TKIs (primary resistance) [7, 8]. The mechanisms and characteristics of primary resistance are less known and none of these explain the majority of cases. Some of mechanisms of primary resistance include: v-Ki-ras2 Kirsten rat sarcoma viral oncogene homolog (KRAS) mutations, de novo MET amplification, and phosphatase and tensin-homolog (PTEN) loss [16–19]. An interesting mechanism related with germline polymorphisms is proapoptotic protein Bcl-2-like 11 (BIM) which has been described and could potentially explain primary resistance to EGFR TKIs [20].

BIM is a member of the B-cell CLL/Lymphoma 2 (Bcl-2) family of proteins and has been related with apoptosis modulation triggered by EGFR-TKIs [21–23]. BIM deletion polymorphisms (BIM-del) consist of intronic deletion polymorphisms in the gene. These polymorphisms switched BIM splicing from exon 4 to exon 3, which resulted in expression of BIM isoforms lacking the proapoptotic Bcl-2-homology domain 3 (BH3) [20]. These germline alterations could have a crucial role in determining how a tumor responds to EGFR-TKIs; however, few studies (none from Latin America) have examined the clinical usefulness of detecting BIM deletion polymorphisms and its relation with clinical characteristics in EGFR positive NSCLC. To determine the usefulness of detecting BIM-del in patients with EGFR mutation-positive NSCLC, we examined the outcomes of Hispanic patients with and without BIM alterations.

The characteristics of the patients included in the study are summarized in Table 1. As expected in EGFR mutated patients, adenocarcinoma histology and non-smokers were both frequent characteristics. EGFR common mutations were present in the majority of patients (84/89 patients) including deletion of exon 19 (46 patients) and L858R (38 patients). BIM-del was present in 14 patients (15.7%). There were no significant differences between patients with and without BIM-del regarding clinical characteristics or type of EGFR mutation, but a difference was obtained with previous tobacco exposure (p = 0.04) (Table 2).

Response to TKI therapy and survival

Table 3: Response rate in EGFR+ according to BIM-del status 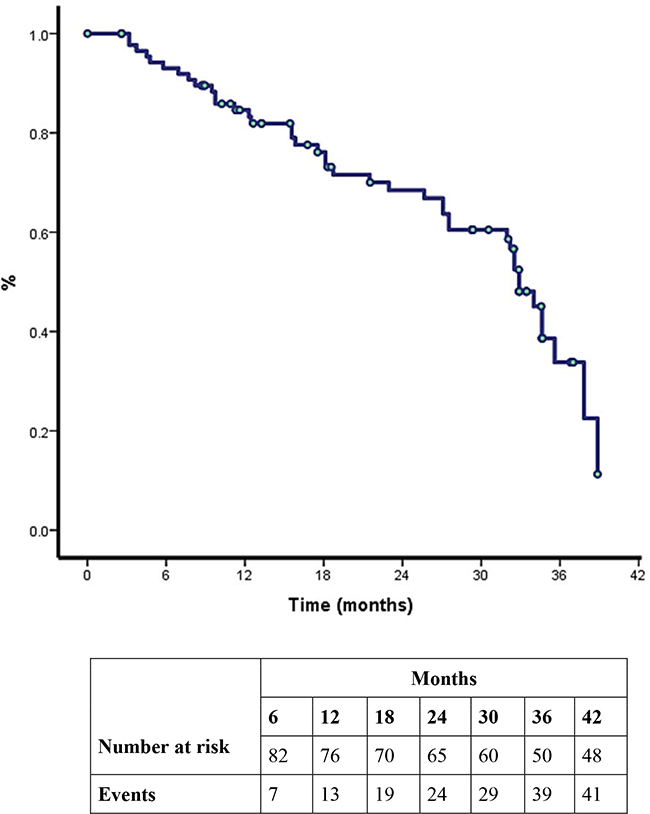 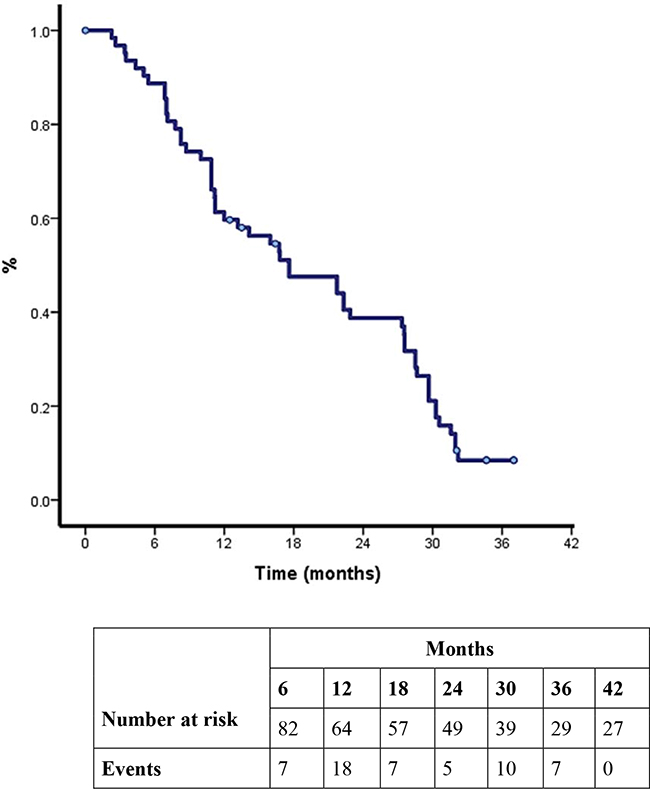 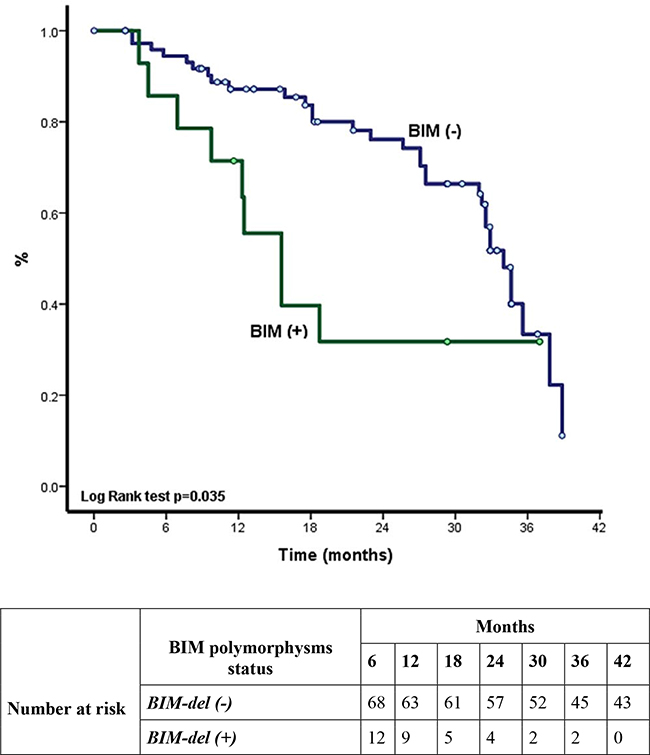 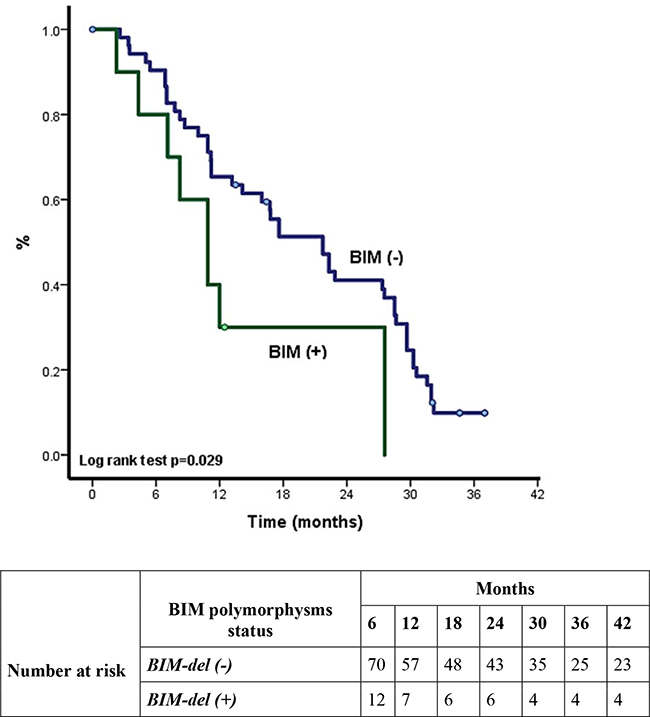 In the literature there are other studies with contradictory results to our study, failing to demonstrate an association between BIM deletion polymorphism and the response to EGFR TKI therapy [26, 28]. For example, Lee et al analyzed the influence of BIM deletion polymorphism in 205 NSCLC EGFR mutation positive patients [28]. BIM del+ patients had similar objective response rates compared to BIM del- patients (91% vs. 84%, p = 0.585). PFS and OS did not differ significantly between both molecular selected populations (PFS = 12 vs. 11 months, p = 0.160; OS = 31 vs. 30 months, p = 0.452). Similar results were reported in another study performed in the Asian population [26]. Different hypothesis have been proposed to explain these contradictory results. For instance, the response to EGFR TKIs varies according to the level of the proapoptotic Bcl-2-homology domain 3 (BH3). Such changes in BH3 and not only the presence of BIM polymorphism itself could therefore explain these diverging results [30]. Likewise, there may be additional ethnic differences in BIM polymorphisms between East Asian and Latin American. Therefore measuring BIM mRNA levels before treatment should be encouraged to establish the role of BIM as a predictor of response to EGFR TKI therapy [30, 31].

Other pro-apoptic proteins belonging to BCL-2 family such a BAX, BAK, PUMA and BAD might also play an important role in the response in oncogene-addicted cancer and activation of apoptosis in NSCLC [32–35]. Variations of the expression of these BCL-2 family proteins could influence the response to TKI therapy in the studies where BIM polymorphisms were evaluated. Further examination of additional genes such as TP53, PTEN and PIK3CA mutations might be useful to unveil the variety of responses to EGFR TKIs [34, 36, 37].

The present study had several limitations including sample size and bias related to the retrospective nature of data collection. We did not analyze BIM deletion polymorphism in blood samples, however there seems to be a concordance between peripheral venous blood and FFPE [25]; still, the validation of BIM deletion polymorphisms in blood samples is warranted as a non-invasive method that allows tissue sparing. Also, we did not validate other genetic alterations such a BCL-2 family proteins distinct to BIM, PTEN, PI3K, etc., in order to explain different responses to EGFR TKIs.

This is a retrospective study following the results described by Ng and colleagues [20]. We included 89 patients carriers of EGFR mutations evaluated at the Clinical and Applied Cancer Research Foundation in Bogotá, Colombia. Samples and information were collected from January 1, 2011 to March 31, 2014. All patients met the following inclusion criteria: informed consent; histological confirmed non-squamous NSCLC, locally advanced or advanced disease (stage IV), no previous systemic treatment, age >18 years; and adequate formalin-fixed, paraffin-embedded (FFPE) tissue available to detect EGFR mutations and their BIM polymorphism status. We also obtained a complete medical history, laboratory tests results, and radiology examinations for each patient. All cases were treated with erlotinib 150 mg daily until disease progression or intolerable toxicity.

All samples were amplified by polymerase chain reaction (PCR) to detect BIM polymorphisms using the following primer sequences: wild-type (WT) BIM forward primer, 50-ACTGTAAAACGACGGCCAGTCCTCATGATGAAGGCTAACTCAA-30; and reverse primer, 50-ACCAGGAAACAGCTATGACCAACCTCTGACAAGTGACCACCA-30. For the BIM deletion polymorphism, the forward primer sequence was the same as that used for wild type BIM, and the reverse sequence was 50-ACCAGGAAACAGCTATGACCGGCACAGCCTCTATGGAGAACA-30. The reaction condition was 95°C for 10 minutes followed by 40 cycles at 94°C for 30 seconds, 60°C for 30 seconds, and 72°C for 30 seconds; and a final extension at 72°C for 10 minutes using the Taq Polymerase premix PCR Kit (Applied Biosystems). PCR products (177 base pairs [bp] for the BIM deletion polymorphism and 174 bp for wild-type BIM were then separated on a 3% agarose gel with nucleic acid dye by electrophoresis and were purified before direct sequencing. To check the presence of somatic mutations in the BCL2L11 gene, a comprehensive screening was performed by direct sequencing including rare mutations described in COSMIC (0.2%; p.Q37Q, p.G49R, p.R85I, p.F97L, p.R188L, p.W195C) without finding any.

The authors are grateful for the generous contribution from the Silberman family and José María Buendía for altruistically promoting the development of cancer research in Colombia.

Preliminary results from this study have previously been shared during the 2014 LALCA Meeting.