* Bing Li, Jinqin Liu and Shiqiang Qu have contributed equally to this study

Methods: CFU-C assays were performed according to the protocol of MethoCultTM H4435 Enriched. 365 consecutive newly-diagnosed, untreated subjects with MDS diagnosed from July, 2007 to April, 2014 were studied. All subjects were reclassified according to the 2008 WHO criteria. Subjects were observed for survival until July 31, 2015. Follow-up data were available for 289 (80%) subjects. Median follow-up of survivors was 22 months (range, 1-85) months. Erythroid and myeloid colonies were isolated from each subject with one cytogenetic abnormality such as del(5/5q), +8, del(7/7q) or del(20q). Cytogenetic abnormalities of each colony were analyzed by fluorescence in situ hybridization (FISH). SPSS 17.0 software was used to make statistical analysis.

Results: The numbers of burst-forming units-erythroid (BFU-E), colony forming unit-erythroid (CFU-E) and colony forming unit-granulocytes/macrophages (CFU-G/M) were significantly lower than normals. A high ratio of cluster- to CFU-G/M was associated with poor-risk cytogenetics. In multivariable analyses a cluster- to CFU-G/M ratio >0.6 was an independent risk-factor for OS after adjusting for IPSS-R (HR 3.339, [95%CI 1.434-7.778]; P = 0.005) in very high-risk cohort.

Conclusion: These data suggest abnormalities of proliferation and differentiation of erythroid and myeloid precursor cells in vitro parallel the ineffective hematopoiesis typical of MDS and may be useful in predicting outcomes of persons with higher-risk MDS.

Myelodysplastic syndrome (MDS) is a heterogeneous neoplasm characterized by ineffective hematopoiesis with resultant cytopenias and a substantial risk of progression to acute myeloid leukemia (AML) [1, 2]. This ineffective hematopoiesis results from several factors including: (1) abnormal function of haematopoietic progenitor cells of the neoplastic clone resulting from mutations in one or more genes controlling DNA, histone and spliceosome functions [3, 4]; and (2) suppression of the function of normal residual haematopoietic progenitor cells by the neoplastic clone [4-6]. Other mechanisms may also operate.

In vitro colony-forming unit cell (CFU-C) assays are usually-used to detect the quantitative and qualitative features of haematopoietic stem cells (HSCs) from normals and persons with diverse haematologic abnormalities including MDS [7]. Lower than normal frequencies of normal CFU-Cs and abnormal clusters of CFU-Cs are common in persons with MDS and were proposed as a diagnostic criterion [8-13]. We analyzed CFU-C quantity and quality in 365 consecutive, newly-diagnosed untreated subjects with MDS. Our data indicate that abnormalities of proliferation and differentiation of erythroid and myeloid precursor cells in vitro parallel the ineffective hematopoiesis typical of MDS and a cluster- to CFU-G/M ratio >0.6 was an independent risk-factor for overall survival after adjusting for conventional prognostic scoring systems [14].

* No significant difference compared with normals.

** Too few cases to analyze.

We used fluorescence in situ hybridization (FISH) analyses of interphase nuclei to determine whether CFU-C from subjects with MDS were from the MDS clone or from residual normal progenitor cells (Figure 1). 18 subjects with del(5/5q), +8, -7 or del(20q) identified by G- and/or R-banding were studied. Abnormalities identified by FISH and by G- and/or R-banding are listed in Table 2. Sometimes cells isolated from the BFU-E were insufficient for FISH analysis. We analyzed both BFU-E and CFU-G/M from 8 subjects and only CFU-G/M from 10 subjects. Both normal and abnormal CFU-Cs were identified in 13 of 18 subjects studied.

Associations between CFU-C and clinical and laboratory variables

Table 3: Associations between CFU-C and clinical and laboratory variables

Figure 2: Overall survival in all subjects (A), IPSS-R higher-risk cohort (B) and IPSS-R lower-risk cohort (C) with cluster- to CFU-G/M ratios ≤or > 0.6

In this study, we found frequent abnormalities in CFU-C in newly-diagnosed, untreated subjects with MDS. About 90 percent had reduced or absent erythroid and/or myeloid CFU-C and about 95 percent had an increased ratio of cluster- to CFU-G/M. Although in MDS patients there were signiﬁcant alterations in both the myeloid and the erythroid lineages, the quantitative deﬁciencies observed in the erythroid lineage were more pronounced than the deﬁciencies found in the myeloid lineage. We also found a significant association between BFU-E and platelet levels. Our data are consistent with some previous studies CFU-C in persons with MDS [8-12].

The CFU-C assays are considered as a direct method to detect the quantitative and qualitative abnormalities of HSCs from patients with MDS. We found that the number and category of cytopenias was in parallel with CFU-C. Using FISH we determined CFU-C were often a combination of cells from the MDS clone and residual normal cells mimicking the ineffective hematopoiesis typical of MDS. We confirmed that the abnormalities of CFU-C assays in MDS reflected the existence and degree of the ineffective hematopoiesis. Therefore, our data support that CFU-C assays should be an important co-criteria for diagnosis of MDS [13].

A high ratio of cluster- to CFU-G/M was associated with poor-risk cytogenetics and OS. Multivariable analyses confirmed these associations were independent of IPSS-R Score for MDS patients, especially in very high-risk group. Therefore, we considered that the ratio of cluster-to CFU-G/M represented the malignant colonies and was associated with survival in MDS patients.

At present, it was undiscovered that what molecular mechanism drove the ineffective hematopoiesis. In a prior study we reported ASXL1 mutations were associated with relatively more colony formation of BFU-E, CFU-E and CFU-GM [15]. These data raise the possibility one or more mutations may operate in the quantitative and qualitative abnormalities of CFU-C. We are using exomic- and whole genome sequencing in our MDS patients to explore this possibility and provide some new insights into the biology of MDS.

In conclusion, we suggest CFU-C assays in persons with newly-diagnosed, untreated MDS may provide additional useful prognostic data to the IPSS-R systems. These assays may also be useful in studying biological aspects of MDS. 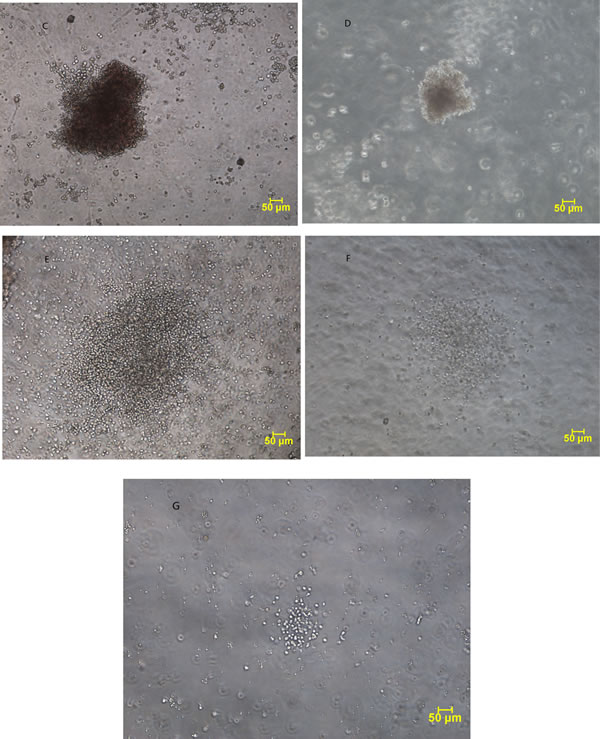 365 consecutive newly-diagnosed, untreated subjects with MDS diagnosed from July, 2007 to April, 2014 were studied. The study was approved by the Ethical Committee of the Institute of Hematology and Blood Diseases Hospital, Chinese Academy of Medical Science according to the guidelines of the Declaration of Helsinki and all subjects gave written informed consent. Median age was 48 years (range, 12-83 years). 240 (66%) were male. Cases were classified according to the 2008 WHO criteria [16]. 5 subjects (1%) had refractory anemia (RA), 1, refractory neutropenia (RN), 2, refractory thrombocytopenia (RT), 14 (4%), refractory anemia with ring sideroblasts (RARS), 209 (57%), refractory cytopenia with multi-lineage dysplasia (RCMD), 70 (19%), refractory anemia with excess blasts-1 (RAEB-1), 56 (15%), refractory anemia with excess blasts-2 (RAEB-2), 5 (1%), myelodysplastic syndrome-unclassified (MDS-U) and 3, MDS associated with isolated del(5q). 336 (92%) subjects with evaluable cytogenetics were classified using the revised International Prognostic Scoring System (IPSS-R) criteria. In the IPSS-R classification we combined very low- and low-risk subjects into a lower-risk cohort and intermediate-, high- and very high-risk groups into a higher-risk cohort.

Subjects were observed for survival until July 31, 2015. Follow-up data were available for 289 (80%)subjects. Median follow-up of survivors was 22 months (range, 1-85) months. 142 (39%) subjects received immune suppressive drugs including cyclosporine and thalidomide. 46 subjects (13%) received anti-cancer therapy(ies) including aclacinomycin or homoharringtonine combined with cytarabine and granulocyte-colony stimulating factor (G-CSF; termed CAG or HAG), idarubicin or daunorubicin combined with cytarabine (IA or DA) or melphalan. 75 (21%) subjects received erythropoietin with or without G-CSF, RBC and/or platelet transfusions and/or iron chelation with desferrioxamine. 11 (3%) subjects received decitabine, 19 (5%) an allotransplant and 72 (20%), traditional Chinese medicines. Subjects receiving an allotransplants were censored in survival analyses.

5-10 mL of bone marrow was collected in sterile, preservative-free heparin tubes and mononuclear cells were separated by Ficoll-Hypaque gradient density centrifugation. CFU-C assays were performed using the MethoCultTM H4435 Enriched (STEMCELL Technologies, Vancouver, Canada.). Briefly, cells were plated at 1×10E+5 cells/mL into 2 wells (1 ml/well) of 24-wells plates and placed into an incubator maintained at 37oC with 5% CO2 and >85% humidity. A colony was deﬁned as an aggregate of >40 cells. Clusters consisted of 4 to 40 cells. Colony forming unit-erythroid (CFU-E) (Figure 3A and 3B) were enumerated after 7 days and the burst-forming unit-erythroid (BFU-E) (Figure 3C and 3D) after 14 days using an inverted phase microscope. Colony forming unit-granulocyte/macrophage (CFU-G/M) (Figure 3E and 3F) and cluster-G/M (Figure 3G) were enumerated after 14 days. Colony numbers were reported as an average of 2 wells adjusted to 10E+5 mononuclear cells plated. The ratio of cluster-G/M was calculated as numbers of cluster-G/Ms divided by number of CFU-G/M and cluster-G/M. Bone marrow samples of a total of 20 healthy volunteer donors ranged from 18 to 50 yrs old were used to establish the normal reference of CFU-Cs. The reference of normal averages (Mean±SD) at our lab were: BFU-E 31±6, CFU-E 81±12, CFU-G/M 22±7 and the ratio of cluster-G/M 0.1±0.05.

The Mann-Whitney U-test or Kruskal-Wallis analysis of variance were used for continuous variables. Survival distributions were estimated by the Kaplan-Meier method. Cox proportional hazards regression model was used to assess the correlation between variables and survival. Overall survival (OS) was defined as time from diagnosis to date of death or last seen. Two-tailed P-values ≤0.05 were considered signiﬁcant.