It has now been confirmed that the alteration of Smad3 expression could cause the occurrence and development of cancer [12]. Han et al have reported that Smad3 functions as a tumor suppressor in gastric cancer [13]. Smad3 have been identified as a critical member in TGF-β signaling pathway [14]. It has been reported that TGF-β strongly inhibits the growth of many tumor cells in the early stage of tumor progression [15]. In this study, we aimed to explore the role of miR-424-5p in gastric cancer. Through bioinformatics predication and experiments confirmation, we found that Smad3 was one of the direct targets of miR-424-5p. Over-expression of Smad3 could partially reverse the effects of miR-424-5p on GC cell proliferation. 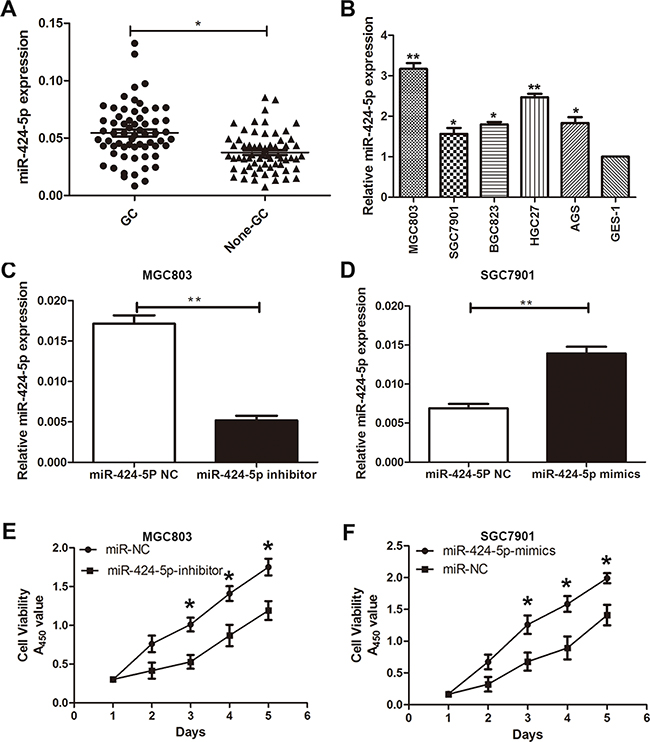 Table 1: Expression of miRNA-424-5p expression and Smad3 in human gastric cancer according to patients’ clinicopathological characteristics 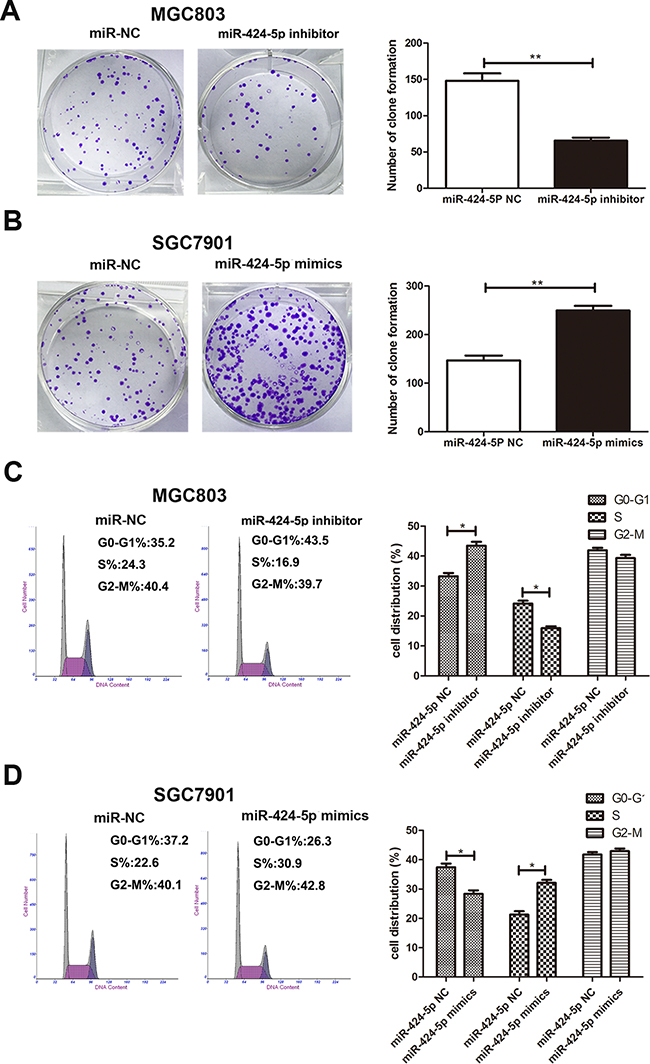 Smad3 is down-regulated in human gastric cancer tissues and cells 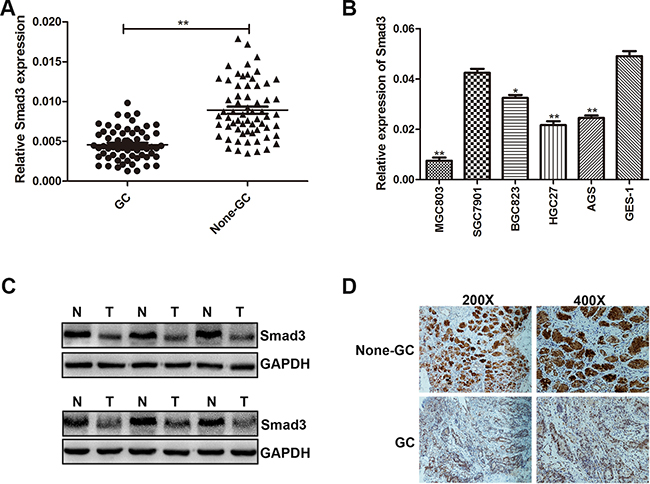 Figure 3: Smad3 was down-regulated in GC tissues and cells. A. The expression level of Smad3 was determined in 63 pairs of human GC tissues and adjacent normal tissues by qRT-PCR. B. The expression level of Smad3 in GC cells and GES-1. C. Smad3 protein level was examined by western blotting in six paired of GC tissues. D. Smad3 protein level in GC specimens and adjacent normal tissues was determined by immunohistochemistry staining.

Through the miRNA target prediction websites (starBase, Targetscan and miRanda), we found that Smad3 might be one of the target genes of miR-424-5p (Figure 4a). To demonstrate the computational prediction results, western blotting was used to determine the expression of Smad3 protein after the changes of miR-424-5p expression. As shown in Figure 4b, we found that over-expression of miR-424-5p could down-regulate the Smad3 protein expression, whereas knockdown of miR-424-5p showed the opposite results. We further explored whether miR-424-5p could directly target the 3’-UTR of Smad3 mRNA by luciferase reporter assay. We have cloned the 3’-UTR fragment with target sequence into the pGL3 luciferase reporter vector (pGL3-Smad3). 3’-UTR fragment with mutated sequence was also cloned into pGL3 luciferase reporter vector as a control (pGL3-Smad3-mut). We have noticed that co-transfection with miR-424-5p mimics and the pGL3-Smad3 vector showed a significantly decreased luciferase activity in MGC803 and SGC7901 cells. However, the luciferase activity of the same cells transfected with pGL3-Smad3-mut vector has not been affected by over-expression of miR-424-5p (Figure 4c). We also found that there was a negative correlation between the expression levels of miR-424-5p and Smad3 in GC specimens (2-tailed Spearman’s correction, r=-0.3580, P<0.05) (Figure 4d). In summary, these data suggested that Smad3 gene might be one of the direct targets of miR-424-5p. 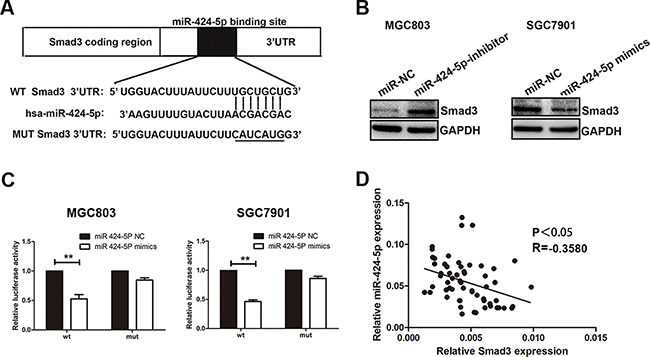 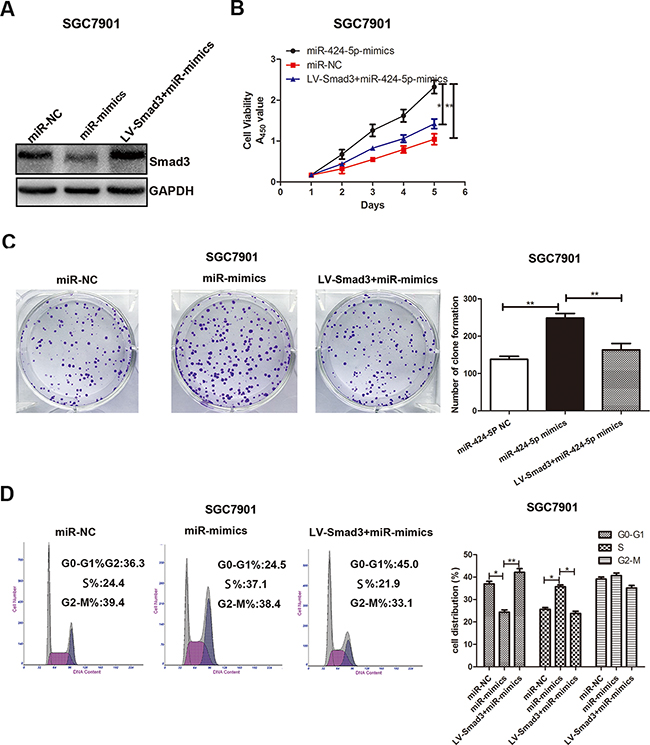 Figure 5: Over-expression of Smad3 could partially reverse the effects of miR-424-5p on GC cell proliferation. A. The Smad3 protein expression level was measured by western blotting. B. Cell growth rate was measured by CCK8 assay. C. The colony formation results of GC cells. D. The cell cycle distribution of GC cells was measured by flow cytometry. 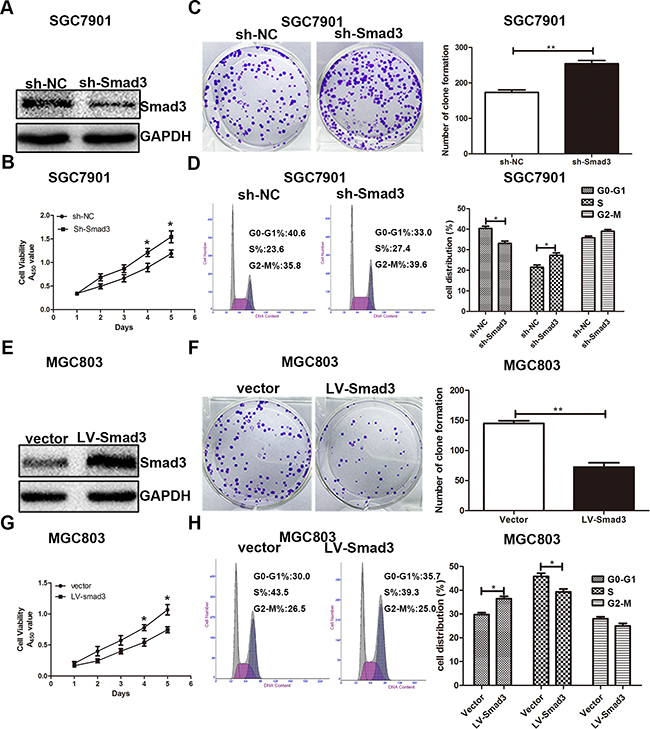 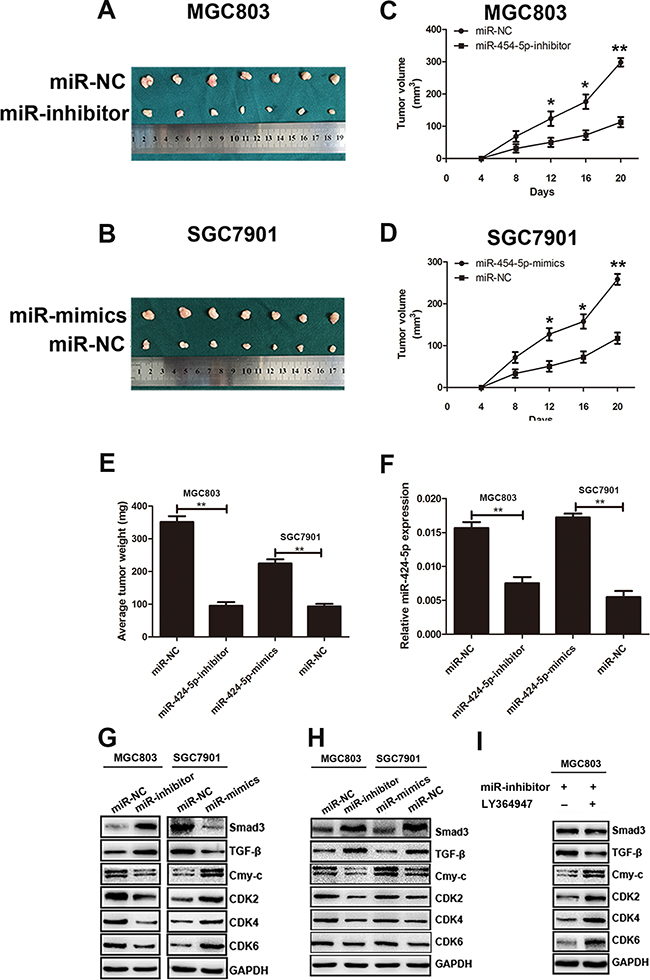 To further explore the mechanism how miR-424-5p induced loss of Smad3 promote the proliferation of GC cells both in vitro and in vivo, the TGF-β, Smad3, C-myc, CDK2, CDK4, CDK6 protein levels in GC cells were determined by western blotting. As shown in Figure 7h, the expression levels of Smad3 and TGF-β were significantly increased in MGC803 cells transfected with miR-424-5p inhibitor lentivirus compared with control. However, the expression levels of c-Myc, CDK2, CDK4, CDK6 were decreased in the same cells. In contrast, Smad3 and TGF-β proteins were down-regulated in SGC7901 cells transfected with miR-424-5p mimics lentivirus. Whereas the protein levels of c-Myc, CDK2, CDK4, CDK6 showed the increased expression in the same cells compared with control. To verify the role of TGF-β in the signaling pathway mediated by miR-424-5p, MGC803 cells transfected with miR-424-5p inhibitor lentivirus was treated by the TGF-β signaling pathway inhibitor LY364947 for 24h. There was no obvious difference on the expression of Smad3 between these two groups. In addition, the expression of TGF-β was decreased in cells which was added the LY364947. However, the downstream targets of TGF-β such as c-Myc, CDK2, CDK4, CDK6 showed the opposite effects in cells treated by LY364947 (Figure 7i). Taken together, these results suggested miR-424-5p might regulate TGF-β signaling pathway through Smad3, which resulted in the cell cycle proteins alteration.

Gastric cancer is a common disease that causes cancer-related deaths worldwide [6]. Despite many efforts have been made to improve the diagnosis and treatment of GC, the prognosis of advanced GC patients is still poor [16, 17]. It was reported that miRNAs may act as either oncogenic factors or tumor suppressors depending on the tumor types and their targeted genes in human cancers [18, 19]. A lot of miRNAs have been reported to be associated with GC progression [6]. For instance, miR-137 inhibits cell growth and induces apoptosis through inactivating CDC42 in GC cells [20]. MiR-129 was down-regulated and leaded to over-expression of SOX4 in primary gastric cancers [21]. MiR-27b-3p suppressed cell proliferation through targeting ROR1 in gastric cancer [22].

Smad3 protein belongs to the SMAD gene family, which is a modulator of TGF-β signaling pathway. Smad3 plays a important role in cancer progression [23]. Transforming growth factor(TGF-β) signaling pathway was reported to be associated with a series of cellular processed [24]. Many studies have been focused in understanding how TGF-β signals modulate cell cycle [25]. An important role in the TGF-β signaling is the inhibition of c-Myc expression. TGF-β inhibits protein expression of c-Myc and cyclin D leading to inhibition of cyclin-dependent kinase (CDK) activities that drive the progression through G1 phase of the cell cycle [26]. It has been reported that c-Myc could control cell cycle entrance by regulating several factors participating in G1/S or in G2/M transitions [27].

The specimens and cell lines

Total RNA was extracted from tissues and cells using Trizol (Takara, Japan) according to manufacturer’s protocol and cDNA was synthesized using Primescript RT reagent (Takara, Japan). Relative expression level of miR-424-5p was normalized to the expression level of U6 and Smad3 expression was normalized to β-actin. The PCR reactions were performed using a 7500 Real-Time PCR System (Applied Biosystems, USA). The primers used in this study were as follows: has-miR-424-5p, forward:5’CAGCAGCAATTCATGTGTTTTGAA3’;U6, forward:5’CTCGCTTCGGCAGCACA3’;Smad3, forward:5’AGAAGACGGGGCAGCTGGAC3’, reverse:5’GACATCGGATTCGGGGATAG3’;β-actin, forward:5’GCATCGTCACCAACTGGGAC3’ reverse: 5’ACCTGGCCGTCAGGCAGCTC3’.

The protein was extracted from GC cells and tissues and transferred to polyvinylidene difluoride (PVDF) membranes. The transferred membranes were blocked in 5% non-fat powdered milk for 2h and incubated with primary antibodies overnight at 4°C. The membranes were then incubated for 2h in secondary antibodies at room temperature. The primary antibodies used in this study were as follows: Smad3 (diluted 1:500, Abcam), TGF-β, c-Myc, CDK2, CDK4, CDK6, GAPDH (diluted 1:1000, Cell Signaling Technology). GAPDH was used as an internal control.

The immunohistochemistry method was performed as described preciously [28]. Smad3 (diluted 1:250, Abcam) was used as primary antibodies.

The luciferase reporter assay method was performed as described preciously [29]. The 3’-untranslated regions (UTR) of Smad3 containing the wild or mutated miR-424-5p binding sequences were synthesized by Genescript (Nanjing, China).

500 cells were plated in 6-well plates for each plate and culture in RPMI-1640 medium containing with 10% FBS. When the colony was obviously after nine days, the plates were then washed with PBS and stained with Giemsa for 15 min. All experiments were performed in triplicate.

The transfected cells were digested with trypsin and centrifuged at 1200 rpm for 5 min and washed twice in PBS. Afterwards, 4 ml ice-cold 75% ethanol was added in this solution to fix cells overnight. The centrifuged cells were then added with 500ul PI staining solution and incubated for 30 min. The distribution of cells was analyzed by a FACS Calibur flow cytometer with Cell Quset software (BD Biosciences)

2000 cells were plated in 96-well plates and cultured in RPMI 1640 medium containing 10% FBS for 6 days. Cell Counting Kit-8 (CCK8) was used to evaluate the cell proliferation. In general, 10ul CCK8 solution was added to each plate and cells were incubated for 2 h in 37°C. The cell viability was revealed by the absorbance which was measured at 450 nm.

4 weeks old female BALB/c nude mice were purchased from the Animal Centre of Nanjing Medical University. 2×106 cells in 200μL PBS were subcutaneously injected into each mice. Care of experimental animals was conducted according to the guidelines of the Nanjing Medical University Institutional Animal Care and Use Committee. Tumor growth was evaluated with calipers every 4 days. The volume of the tumor was calculated using the formula: Tumor volume=length×width2×0.5

The data were expressed as mean ±standard deviation. The statistical analyses were performed using Student’s t test (two-tailed) with the Social Sciences (SPSS) software version 19.0. Categorical data were evaluated by the X2 test. The data were considered significant when* P<0.05, **P<0.01, or ***P<0.001.

The authors declare no conflict of interests