Rectal cancer is one of the most common malignancies of the digestive system. Along with colon cancer, it ranks near the top of cancer incidence and cause specific death worldwide [1–3]. Surgery is the only curable treatment for early stage cases [4]. Although some details remain to be explored, preoperative chemoradiotherapy has become the standard treatment strategy for locally advanced rectal cancer [5–10]. Adjuvant chemotherapy does not significantly reduce recurrence, improve disease-free survival (DFS) or overall survival (OS) according to recent studies [11, 12]. Identification of significant prognostic factors helps to determine subgroups with high risk, who may benefit from subsequent systemic chemotherapy.

In general, there were 14,572 rectal adenocarcinoma identified from SEER database in this study. After further selection of cases by the information of surgery and radiotherapy, we obtained 5,439 cases who received preoperative radiotherapy followed by resection of primary rectal cancer. Among them, the information for TDs (Absent / Present) was available in 4,813 (88.5%) cases, and these cases were finally included in this study. TDs were present in 514 (10.7%) cases. The presence of TDs was not associated with gender (Male / Female), age (≤ 59 / > 59 yrs) nor tumor size (≤ 4 / > 4 cm). TDs was present in tumors with more aggressive features, including poorer differentiation, distant metastasis, higher carcinoembryonic antigen (CEA) level, higher rates of circumferential resection margin (CRM) involvement and perineural invasion (all P < 0.001, Table 1). In addition, a sequential elevation of positive rate of TDs was presented along with the progression of ypT category, ypN category and ypTNM stage (all P < 0.001, Table 1).

Table 1: The association of tumor deposits with clinicopathologic characteristics in rectal cancer with preoperative radiotherapy 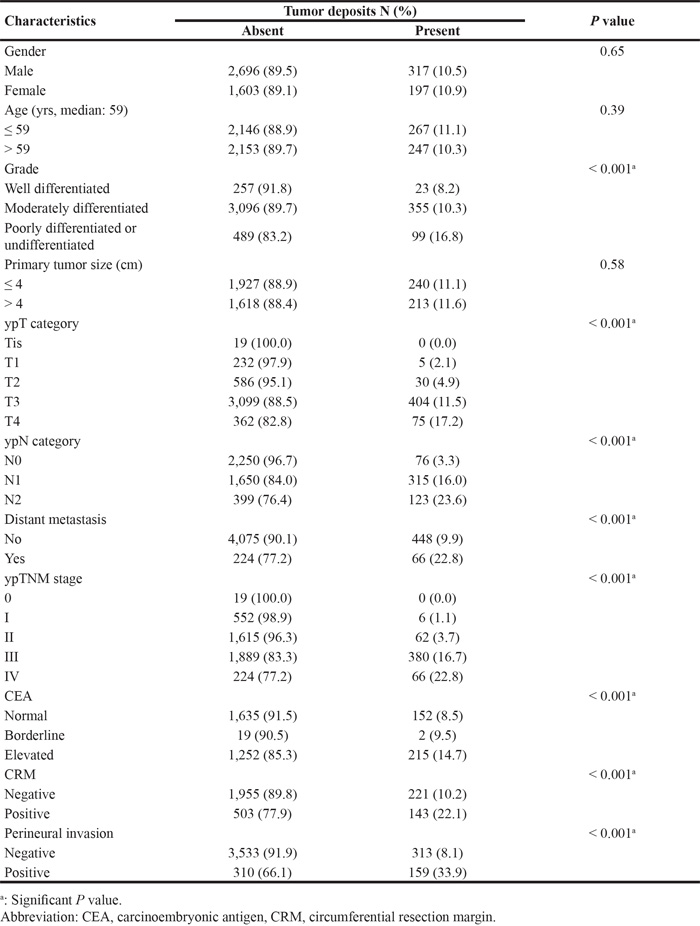 The prognostic value of TDs in rectal cancer with preoperative radiotherapy

Table 2: Univariate and multivariate analysis for the prognostic value of tumor deposits in rectal cancer with preoperative radiotherapy 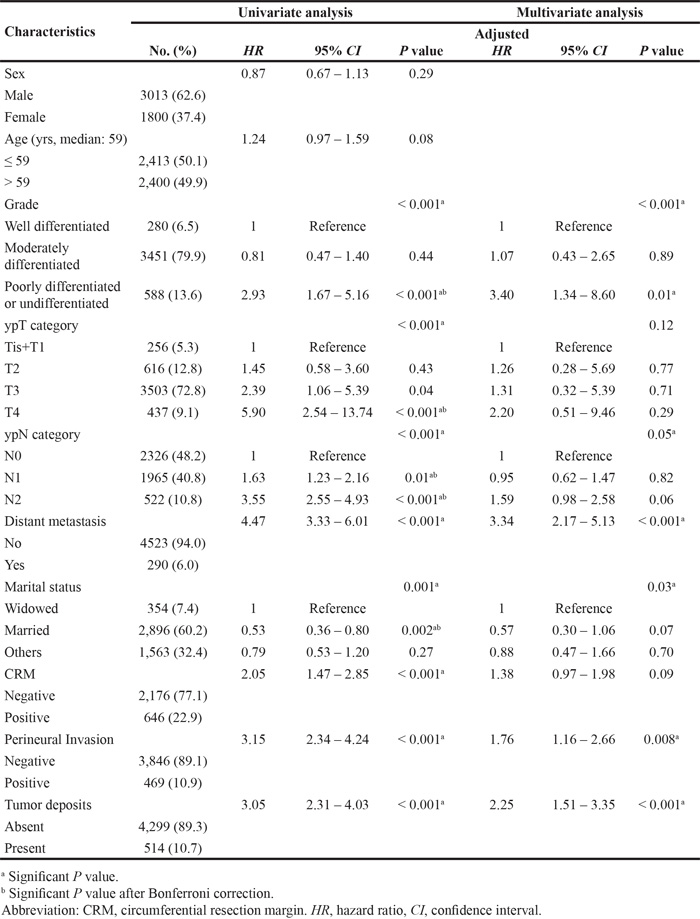 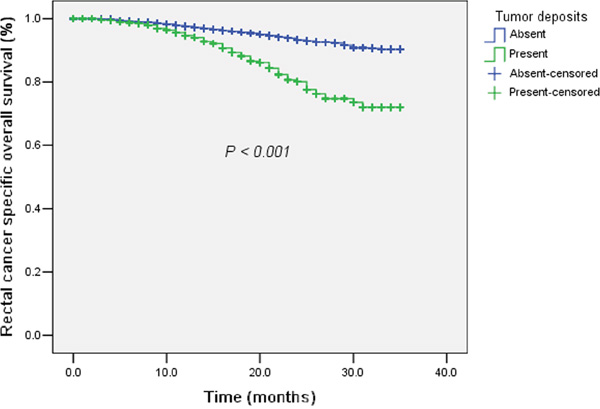 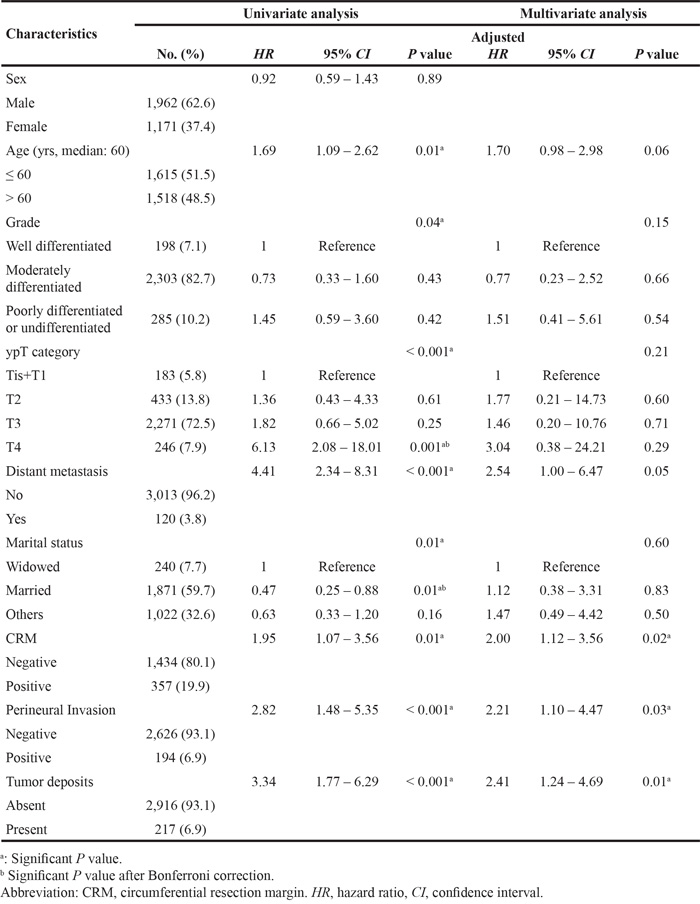 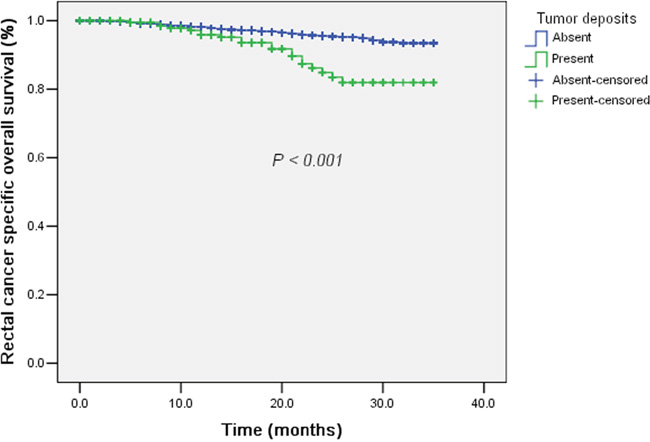 Firstly mentioned in the 5th edition of AJCC/TNM staging system, the definition of TDs had evolved along with the release of subsequent editions. During the evolution of TDs definition, the clinicopathologic relevance and prognostic value of TDs had been widely investigated and confirmed in colorectal cancer [13, 15, 17, 21–24]. However, the applicability of TDs in rectal cancer with preoperative chemoradiotherapy had been doubted due to pathological changes induced by chemoradiotherapy. The feature of tumor regression might present with tumor nodules surrounded by fibroinflammatory stroma, which might cause confusion to distinguish residual microfoci and TDs [25, 26]. Thus the value of TDs in rectal cancer with preoperative chemoradiotherapy needed further assessment.

In rectal cancer receiving preoperative radiotherapy, consistent with the findings by Gopal P et al [19] and Zhang LN et al [20], we demonstrated the relevance of TDs with several aggressive tumor features, including more intensive regional lymph nodes metastasis [19, 20], more perineural invasion [19] and higher CEA level [20]. In addition, we also found TDs to be significantly associated with poorer tumor differentiation, more advanced ypT category and ypTNM stage, distant metastasis, as well as higher positive rates of CRM involvement and perineural invasion. It seemed that TDs was not only indicators of more advanced tumor stage, but also associated with intrinsic tumor aggressiveness. Our study also verified the prognostic value of TDs for rectal cancer-specific survival in rectal cancer with preoperative radiotherapy, which was in accordance with the studies by Gopal P et al and Zhang LN et al. Furthermore, by demonstrating the significant and independent prognostic value of TDs in regional lymph nodes negative group, we also proved the applicability of N1c category established by the 7th edition of AJCC/TNM staging system in rectal cancer with preoperative radiotherapy.

Several limitations of our study were noteworthy. Because information of chemotherapy was not available in the SEER database, we could only include rectal cancer with preoperative radiotherapy for analysis in this study. Chemoradiotherapy was the standard treatment for rectal cancer, thus this was one of the major limitations in our study. In addition, several important pathologic factors, including tumor regression grade and vascular invasion were not accessible, thus the conclusions of our study were not adjusted by these important prognostic factors. More importantly, the inter-observer variability in diagnosing TDs was particularly challenging for SEER data due to the various pathologists involved in the data generation. In addition, radiotherapy could increase tissue fibrosis and might cause false-positive diagnoses of TDs. The uniformity of diagnosis and possible false-positive diagnosis were major limitations in our study. These limitations couldn’t be resolved and should be particularly noticed in our study with SEER data. Given these limitations, a further verification of our conclusions using a population with more complete information was warranted. In conclusion, tumor deposit was a significant and independent prognostic factor, and N1c category by the 7th edition of AJCC/TNM staging system was applicable in rectal cancer with preoperative radiotherapy.

This study was deemed exempt from institutional review board approval by Sun Yat-sen University Cancer Center and informed consent was waived. This study was conducted in accordance with the ethical standards of the World Medical Association Declaration of Helsinki.

The dataset used for analysis in this study was based on the November 2014 data submission “Incidence-SEER 18 Regs Research Data + Hurricane Katrina Impacted Louisiana Cases, Nov 2014 Sub (1973-2012 varying)”. According to the International Classification of Diseases for Oncology, third edition (ICD-O-3) topography codes and histology codes, adenocarcinoma (Code 8140 – 8147, 8210 – 8211, 8220 – 8221, 8255, 8260 – 8263, 8480 – 8481, 8490 and 8574) of rectum (Code C20.9) was included in this study. In addition, we restricted eligibility to patients with records of the 7th American Joint Committee on Cancer/tumor node metastasis (AJCC/TNM) category from 2010 to 2012. We also excluded cases without follow-up records (survival time code of 0 months) and patients with primary tumors other than rectal cancer. Further limitations about radiation (Radiation sequence with surgery) and surgery (RX Summ--Surg Prim Site (1998+)) were also considered for the final study population.

Tumor deposits were defined as follows in the 7th edition of AJCC/TNM staging system: “The deposit should be in the pericolorectal fat or adjacent mesocolic fat, it should be away from the leading edge of the tumor, there should be no evidence of residual lymph node tissue, and finally the tumor deposit should be within the lymph drainage area of the primary carcinoma”. This was different from previous definitions which laid more importance on the size and shape of tumor nodules in the 5th and 6th edition of AJCC/TNM staging system. With the implement of Collaborative Stage Data Collection System Version 2 (CSv2) in 2010, the information of TDs was recorded in SEER database as site-specific factor (SSF) 4. The codes and description of the SSFs are available at https://cancerstaging.org/cstage/schema/Pages/version0205.aspx.

We performed all the analyses with SPSS for windows V.13.0. (SPSS Inc., Chicago, IL, USA). The association of TDs with clinicopathologic features was conducted using chi-square test or Kruskal-Wallis H test. Rectal cancer-specific survival was calculated as the time interval between the diagnosis of rectal cancer and the death attributed to rectal cancer, or censored at the death from other causes or the last visit. Univariate and multivariate survival analyses were computed for the prognostic value of TDs for rectal cancer-specific survival. Survival curves were plotted by the Kaplan-Meier method and compared using the log-rank test. HR and 95% CI were computed with the cox proportional hazards model. A two tailed P value < 0.05 was considered statistically significant. Bonferroni correction was applied in univariate analysis.

The authors gratefully acknowledge the staff members of the National Cancer Institute and their colleagues across the United States and at Information Management Services, Inc., who have been involved with the SEER Program. In addition, they acknowledge Professor Ying Guo for her assistance in statistical analysis.

The authors declare no conflicts of interest in this study.

This work was supported by: