Osteonecrosis of the femoral head (ONFH) is a common hip joint disease that frequently causes disability. Nearly 20 million patients suffer from ONFH worldwide [1], with an estimated 8.12 million non-traumatic ONFH cases in 2013 in China alone [2]. Steroid-induced ONFH accounts for 24.1% of all ONFH cases [1]. Several studies demonstrate that only some patients develop ONFH within a few months of glucocorticoid (GC) therapys, suggesting that genetic factors may confer susceptibility or resistance to steroid-induced ONFH.

Matrix metalloproteinases (MMPs) are a family of zinc-dependent proteolytic enzymes that participate in morphogenesis, wound healing, tissue repair, and remodeling in response to injury, and glucocorticoids can inhibit the expression of MMPs. Garvican et al. [3] found that corticosteroids suppressed the expression of MMP-1, MMP-3, MMP-13, gelatinase A (MMP-2), and gelatinase B (MMP-9) mRNA. Glucocorticoids also down-regulate MMP-2 expression by inducing microRNA 29c [4]. Dexamethasone might aid in the treatment of bacterial meningitis and acute lung injury by down-regulating MMP-9 expression [5, 6]. In addition, gelatinase A (MMP- 2) and B (MMP-9) play crucial roles in bone remodeling [7]. Both gelatinase A (MMP-2) and gelatinase B (MMP-9) are produced by osteoblasts, and MMP-9 can also be synthesized by osteoclasts [8]. MMP-2 expression is upregulated in osteoarthritic cartilage [9], and MMP-9, which regulates growth plate angiogenesis and apoptosis of hypertrophic chondrocytes, may be essential for normal bone remodeling [10]. Both MMP-2 and MMP- 9 expression are increased in the joints of rheumatoid arthritis patients [11, 12]. Additionally, MMP-2 mRNA and protein levels are up-regulated in ONFH subjects, while MMP-9 protein is overproduced in osteoarthritic bone tissue [8]. Inactivating mutations in the MMP2 gene result in bone and joint features of multicentric osteolysis with arthritis [13], and osteoclast MMP-9 expression increases in response to adrenocorticotropic hormone (ACTH) in murine models, confirming the effects of ACTH on early osteoclast differentiation [14]. Furthermore, observations that low ACTH levels are associated with microvascular osteonecrosis and that ACTH administration reduces this necrosis suggest that ACTH might be useful for decreasing the risk of osteonecrosis in humans [14]. Additionally, MMP-9 expression may serve as a marker of efficacy in the treatment of steroid-induced osteonecrosis using ACTH. MMP-2 and MMP-9 expression, which were both higher in steroid-induced ONFH patients than in controls, have only recently been investigated in Chinese populations.

Table 1: Characteristics of cases and controls in this study

ap was calculated by exact test.

p values were calculated by Wald test by unconditional logistic regression adjusted for age and gender. 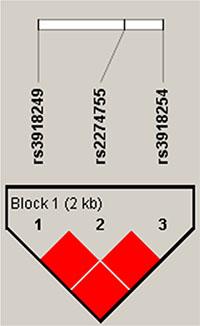 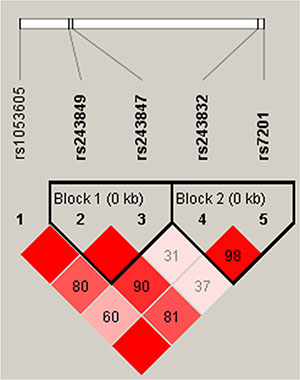 Table 4: The haplotype frequencies of MMP9 polymorphisms and their association with steroid-induced ONFH risk

bp values were calculated by unconditional logistic regression adjusted for age and gender.

However, after Bonferroni correction was applied to our data, there were no statistically significant associations between MMP2 and MMP9 SNPs and the risk of steroid-induced ONFH.

MMP-9, an extracellular matrix (ECM)-metabolizing enzyme, plays a crucial role in bone remodeling. Overexpression of MMP-9 by osteoclasts is critical for digesting type I collagen and aggrecan, which are found mainly in cartilage [11]. MMP-9 expression is stimulated by RANKL, which is essential for osteoclastogenesis [25–27]. Fujisaki et al. [28] reported that RANKL induced MMP-9 production in osteoclasts and increased bone resorption in the presence of IL-1α. In addition, Guo et al. [29] showed that decreased membrane-type matrixmetalloproteinases-1 (MT1-MMP) expression is involved in RANKL signaling in osteoblasts and the activation of osteoclasts. Thus, osteoclast-derived MMP-9 may contribute to bone resorption in steroid-induced ONFH. MMP-9 also facilitates the recruitment of inflammatory cells in the airways during allergic inflammation and chronic obstructive pulmonary disease [30, 31]. Therefore, MMP9 might also contribute to steroid-induced ONFH by affecting bone resorption or inflammatory responses. Additional studies are needed to characterize the exact mechanisms by which MMP-9 regulates steroid-induced ONFH.

The rs2274755 locus is located in an intron (boundary) of the MMP9 gene, and rs2274755 variations have been investigated in many studies. In a study of a Chinese Han population, no association was found between rs2274755 and susceptibility to either polypoidal choroidal vasculopathy or age-related macular degeneration [32]. Jimenez-Morales et al. found that rs2274755 polymorphism was associated with asthma in Mexican pediatric patients [23], as was the case in Nakashima et al.’s study in a Japanese population [33]. Furthermore, a functional study suggested that MMP-9 polymorphisms were associated with increased asthma pathogenesis [33]. Here, we found that rs2274755 polymorphism was associated with a decreased risk of steroid-induced ONFH in a northern Chinese population. Thus, rs2274755 variation may have a complex effect on inflammatory cells and capillaries in the femoral head, which may promote steroid-induced ONFH.

To our knowledge, the present study provides the first evidence that variation at the rs2274755 locus in the MMP9 gene is associated with a decreased risk of steroid-induced ONFH risk in the northern Chinese population. However, some limitations of this study should be considered when interpreting these results. First, the sample sizes were relative small, and additional studies should confirm these results in more patients. Second, all samples were collected at the Zhengzhou Traditional Chinese Medicine Traumatology Hospital in northern China, which may increase the type I error (false positive) rate for association studies. Additionally, the Bonferroni correction for multiple tests is important to account for false discovery rate. After correction, we found no statistically significant associations between MMP2 and MMP9 SNPs and the risk of steroid-induced ONFH. This may be due to our small sample size and strict SNP filtering criteria; furthermore, the Bonferroni correction is very conservative when applied to multiple tests. Continued sample collection will help to confirm our results in future studies.

Taken together, our results identified for the first time an association between rs2274755 MMP9 polymorphism and a decreased risk of steroid-induced ONFH in a northern Chinese population. Additional larger population-based studies are needed to confirm these results.

This study adhered to the principles of the Declaration of Helsinki, and all protocols involving human specimens were approved by the Ethical Committee of the Zhengzhou Traditional Chinese Medicine Traumatology Hospital. Informed consent was obtained from each subject.

285 steroid-induced ONFH patients were enrolled between September 2014 and January 2016 at the Zhengzhou Traditional Chinese Medicine Traumatology Hospital. Steroid-induced ONFH was defined by a history of a mean daily steroid dose of ≥ 16.6 mg, or a high-dose steroid impulsion therapy lasting more than 1 week [34–36]. ONFH was diagnosed by examining osteonecrosis in anteroposterior and frog view X-rays of both hips and/or magnetic resonance imaging [37]. Exclusion criteria were as follows: (i) those who drank the equivalent of more than 400 mL of pure ethanol per week; (ii) those did not meet the diagnostic criteria for steroid-induced ONFH and patients with traumatic ONFH, dislocation of the hip joint, and other hip diseases. (iii) those who had significant familial hereditary diseases.

None of the 507 control subjects recruited based on medical examinations at the Zhengzhou Traditional Chinese Medicine Traumatology Hospital were related to the case subjects. All subjects were Han Chinese from northern China. Subjects with excessive consumption of alcohol, corticosteroids, or significant familial hereditary diseases were excluded.

All eight SNPs had minor allele frequencies > 5% in the HapMap Chinese Han Beijing (CHB) population. Blood samples were collected in EDTA tubes and stored at −80°C after centrifugation at 2000 rpm for 10 minutes. Genomic DNA was extracted from whole blood using an extraction kit (GoldMag, China) and stored at −20°C. DNA quantity was evaluated by spectrophotometry (DU530UV/VIS spectrophotometer, Beckman Instruments, Fullerton, CA, USA). The Multiplexed SNP Mass EXTEND assay was developed using Sequenom MassARRAY Assay Design 3.0 Software. The primers for the eight selected SNPs are shown in Table 5. A Sequenom MassARRAY RS1000 was used for SNP genotyping according to the manufacturer’s protocol.

Table 5: Primers used for this study

This work was supported by the National Natural Science Foundation of China (No. 81160228, 81260284, 81660378). We wish to express heartfelt thanks to all of the patients and healthy control subjects, the clinicians, and the other hospital staff for their participation in and contributions to this study.