The overexpression of MDM4: an effective and novel predictor of gastric adenocarcinoma lymph node metastasis

Background: MDM4 is the important negative regulator of the tumor suppressor protein p53, which is overexpressed in various human cancers. This study evaluates the MDM4 expression in patients with gastric adenocarcinoma (GTAC) at the mRNA and protein levels and examines relationships among MDM4 expression, clinicopathological features, and prognosis.

Results: The qRT-PCR and the Western blot analysis showed that the MDM4 expression level was high in GTACN+ but not in GTACN−. The high expression level of MDM4 was significantly associated with age (P = 0.047), lymph node metastasis (LNM) (P < 0.001), pathological stage (P < 0.001), differentiation status (P = 0.001), and preoperative serum CA19-9 level (P < 0.001). Moreover, the survival analysis showed that Borrmann type, depth of invasion, LNM, and preoperative serum CA19-9 level were independent prognostic factors. The univariate analysis revealed that MDM4 expression influenced GTAC prognosis. Furthermore, the influence of overall prognosis relies on whether or not the high MDM4 expression level could lead to LNM.

Gastric cancer, a common malignant tumor, remains a major cause of death worldwide despite its decreased incidence over past decades [1, 2]. About 90% to 95% of Gastric cancers are adenocarcinomas. Lymph node metastasis (LNM) is an important prognostic factor in gastric cancer [3, 4]. Among patients with R0 resection for gastric cancer, LN status is the most important independent prognostic factor, followed by pT category, surgical complication, and distant metastasis [5]. No accurate and reliable judgment of preoperative LNM has been established for patients with GTAC. Enhanced computed tomography (CT) is routinely used to evaluate LNM in gastric cancer, with a sensitivity of 80.0% and a specificity of 77.8% based on the size of LN [6]. However, the sensitivity of CT imaging is only 6.1%, and metastasized lymph nodes are smaller than 5 mm [7]. Accurate knowledge of the LN status helps predict prognosis and plan the extent of lymphadenectomy. Therefore, objective markers must be developed to identify LNM in GC.

The MDM4 gene encodes a nuclear protein that contains a p53-binding domain at the N-terminus and a RING finger domain at the C-terminus. MDM4 is overexpressed in various human cancers [8, 9]. MDM4 inhibits p53 by binding to its transcriptional activation domain. In addition, MDM4 interacts with the MDM2 protein via the RING finger domain and inhibits the degradation of the latter [10]. We collected microarray data of 186 GTAC cases and 33 normal gastric tissue cases from the Cancer Genome Atlas database. The bioinformatic screening showed that MDM4 expression is associated with LNM of GTAC (GTACN+). Similar approaches have been widely applied in previous studies [11, 12]. The screening results need to be examined by further investigations. Therefore, the purpose of this study is to verify the relationship between MDM4 and LNM in GTAC. 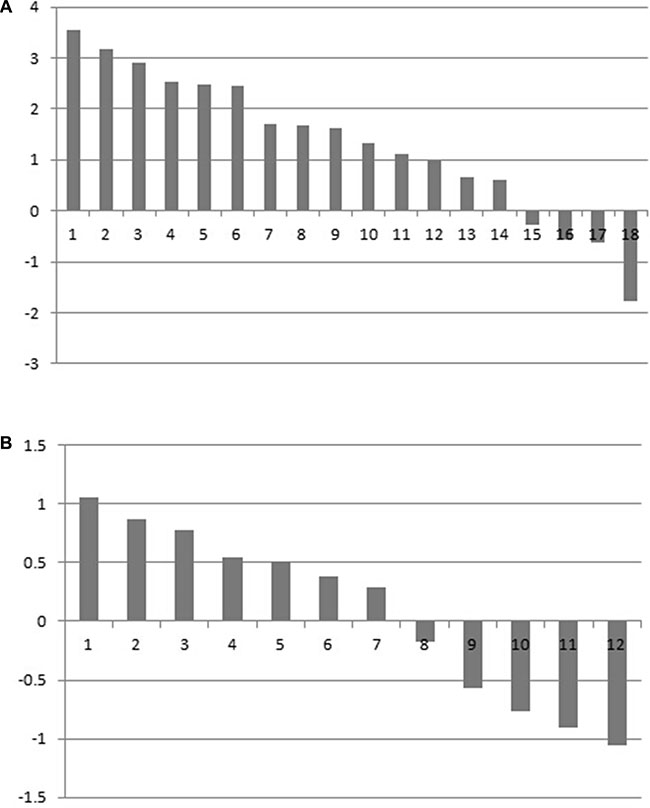 The Western blot analysis was employed to determine the expression status in 30 pairs of fresh GTAC and adjacent normal gastric tissues and protein expression of MDM4 in GTAC. The results showed that MDM4 expression is high in GTACN+ (10/18) (Figure 2A) but low in GTACN− (5/12) (Figure 2B). The result of the Western blot analysis was conformed with that of qRT-PCR in the 30 pairs of fresh GTAC tissues. 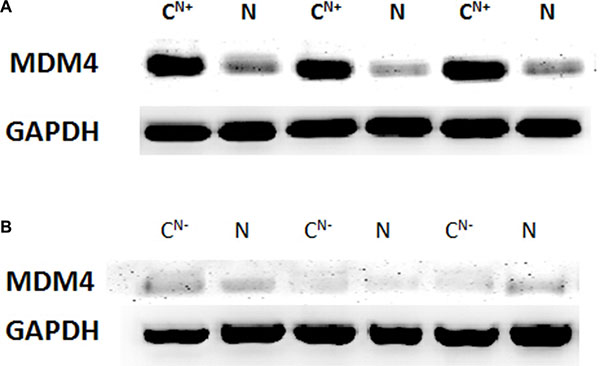 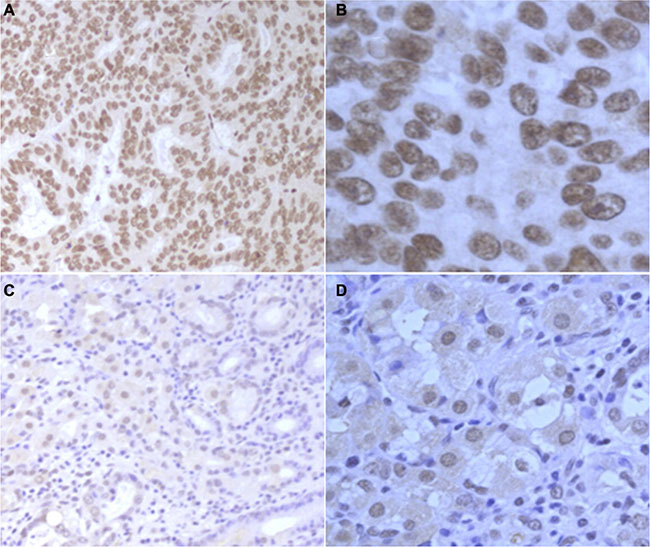 Table 1: Correlation among MDM4 expression and the clinicopathological features of patients with GTAC

Table 2: Univariate and multivariate analyses of the prognostic factors for TGAC patients

Borrmann type, depth of invasion, LNM (P < 0.001), and preoperative CA19-9 level (P = 0.009) were also independent factors influencing the prognosis of GTAC. Patients with Borrmann types III/IV often have a poor prognosis [22]. Particularly, lymph node and distant metastases are common in patients with Borrmann type IV [22–24]. Luo et al. [23] performed a meta-analysis of patients with gastric cancer of type IV Borrmann and poor tumor differentiation; the results indicated that these patients were prone to LNM, distant metastasis, serosal invasion, and lymph node invasion and had a poor prognosis. Our results showed that Borrmann type was an independent factor influencing GTAC prognosis. This result was consistent with that obtained by other researchers. Previous studies demonstrated that the depth of invasion was an independent prognostic indicator of GTAC [25, 26]. This study indicated that patients with T3–4 had significantly shorter overall survival than those with T1–2. The survival analysis showed that the depth of invasion was an independent prognostic indicator for GTAC. Such a finding was consistent with the previous research. LNM is the most important factor for the prognosis of patients with gastric cancer [27, 28]. In this study, high MDM4 expression was associated with LNM of GTAC. The univariate analysis showed that MDM4 expression influences the prognosis of GTAC. However, the multivariate analysis showed that the MDM4 expression was not an independent prognostic factor of GTAC. Accordingly, the influence of MDM4 on GTAC prognosis depended on whether it could lead to LNM of GTAC [28]. Increased CA19-9 level indicates poor GC prognosis [29, 30]. Yajima et al. [29] reported that CA19-9-producing gastric cancer had poor prognosis characterized by high preoperative serum CA19-9. Our findings showed that high preoperative serum CA19-9 was an independent prognostic factor for GTAC.

Thirty pairs of fresh GTAC and corresponding normal mucosa tissue samples (more than 5 cm away from the GTAC edge) were obtained from patients between January 2015 and June 2015. And those samples were used for the Western blot analysis and the qRT-PCR analysis. A total of 336 paraffin-embedded tissues diagnosed with GTAC at the Department of Gastroenterologic Surgery, Harbin Medical University Cancer Hospital between January 2010 and December 2010, were used in the immunohistochemistry (IHC) analysis. Thirty-three matched normal gastric tissues were used as control samples. The 336 patients comprised of 238 men and 98 women aged 24–81 years old (mean age is 57.6 years old). None of the patients received preoperative anticancer treatment, and no patient had synchronous distant metastasis. Various clinicopathological parameters (i.e., age, gender, tumor size, Borrmann type, differentiation status, depth of invasion, LNM, pathological stage, preoperative serum CEA, and preoperative serum CA19-9) were obtained from histopathology records. The GTAC stage was described according to the 2010 tumor node metastasis classification of malignant tumors by the American Joint Committee on Cancer. The patients were followed-up until death or the last follow-up date (31 December 2015). All patients underwent complete follow-up, which ranged from 3 to 71 months. The patients provided written informed consents. An ethical approval was obtained from the Ethical Committee of Harbin Medical University Cancer Hospital.

Total RNAs were extracted from 30 pairs of fresh GTAC and adjacent normal gastric tissues by using E.Z.N.A.® Total RNA Kit (Omega Biotek Store, USA). The qualified total RNAs were reversely transcribed into the first-strand cDNAs by using the PrimeScript® RT Reagent Kit (Takara). The forward primer for the MDM4 gene was 5′-CTAAGTCCTTAAGTGATGATACCGATGT-3′, and the reverse primer was 5′-AACTTTGAACAAT CTGAATACCAATCC-3′. The forward primer for the GAPDH gene was 5′-GGACCTGACCTGCCGTCTAG-3′the, and the reverse primer was 5′-GAGGAGTGGGT GTCGCTGTT-3′. The qRT-PCR was conducted using an ABI 7500 RT-PCR amplifier (Applied Biosystems, USA) to determine the expression pattern of MDM4 mRNA in each GTAC sample and paired adjacent normal gastric tissue. The qRT-PCR was then performed using the SYBR® Premix Ex Taq™ II Kit (Takara) in a total volume of 20 μl. GAPDH was used as the reference gene. The relative gene expression levels were represented as ΔCt = Ct (gene) − Ct (reference). The fold change of gene expression was calculated using the 2–ΔΔCt method. The experiments were repeated in triplicate.

MDM4 expression in 336 GTAC and 33 normal gastric tissues was examined using IHC. The samples were fixed in formalin, embedded in paraffin, cut into 4 μm-thick sections, and mounted on silane-coated slides. Antigen was retrieved by immersing the samples in EDTA (pH 8.0) at high pressures for 2.5 min. The sections were then incubated in a humidified chamber at 4°C overnight with the primary antibody, mouse anti-MDM4 (diluted 1:250, Abcam, USA). The sections were incubated with biotinylated IgG secondary antibody (ZsBio, China) after washing three times in phosphate-buffered saline (PBS). The color was developed with 3,3′-diaminobenzidine DAB solution. The specificity of immunostaining was confirmed by obtaining negative controls through the replacement of the primary antibody with PBS. MDM4 expression was scored by multiplying the percentage of positive tumor cells and staining intensity. The percentage of the positive cells was initially scored into 0 (0%), 1 (1%–25%), 2 (25%–50%), 3 (50%–75%), and 4 (75%–100%). Thereafter, staining intensity was scored as follows: 0 (negative), 1 (weakly positive), 2 (moderately positive), and 3 (strongly positive). The immunostaining score, also known as staining index (SI), was calculated for each case by multiplying the percentage of positive cells with the staining intensity score, the resulting score is widely used in many malignant tumor studies [31, 32]. The immunohistochemistry scoring procedure was carried out to duplicate by two experienced pathologists to evaluate immunohistochemistry. The experienced pathologists did not know the clinicopathological information or the corresponding H&E slide. In the cases of scores with discrepancies, the results of immunohistochemistry were evaluated by additional pathologists until the consensus was reached. The obtained value ranged from 0 to 12. An optimal cut-off value was identified as follows: an SI score of six or higher was used to define tumors with high MDM4 protein expression level, and an SI score of less than six was used to indicate low expression levels.

This study was supported a grant supported by the Harbin Medical University Cancer Hospital. The authors also deeply appreciate the external assistance from Dr. Fanling Meng and Yuyan Ma.