Predictive value of homocysteine for depression after acute coronary syndrome

Depression is commonly comorbid with acute coronary syndrome (ACS) [1, 2], with multiple biomarkers suggested as potential explanations [3-5]. Homocysteine is a potential candidate, since it has been associated with both disorders [4]. Homocysteine can cause atherothrombosis by various insults on vascular system, and therefore increase the risk for ACS [6], as well as directly inhibiting monoamine neurotransmitter metabolism and thus linked with depression [7, 8]. Whether homocysteine is a common biomarker for ACS and depression has not yet been investigated.

Homocysteine level are influenced complex systems including nutritional deficiencies or supplement of vitamins, and medical conditions such as chronic kidney disease, diabetes, and malignancies [9]. Homocysteine levels are also strongly influenced by genetic factors particularly for methylenetetrahydrofolate reductase (MTHFR), which catalyzes the reduction of 5,10-methylenetetrahydrofolate to 5-methyltetrahydrofolate. A 677C->T variant of MTHFR gene is responsible for thermolabile MTHFR with reduced enzymatic activity [10], and therefore and T allele is associated with higher homocysteine level [11, 12]. Relevant to these findings, the T allele of MTHFR gene has been reported to be associated with the ACS [13] and depression susceptibility [14]. However, it has not been investigated as a risk factor for depression occurring in ACS.

With respect to treatment response, homocysteine and MTHFR C677T polymorphism have additionally been investigated as predictors of antidepressant response in patients with major depressive disorder [15, 16], but not to date in ACS.

Using the data from observational prospective study in Koreans patients with ACS, this study aimed to investigate the roles of plasma homocysteine levels and MTHFR C677T polymorphism in relation to risks and treatment responses of depression in ACS.

Homocysteine concentration and MTHFR polymorphism by depression and remission status

b adjujsted for the same model as in prevalent depressive disorder plus treatment status (escitalopram, placebo, and medical treatment only) 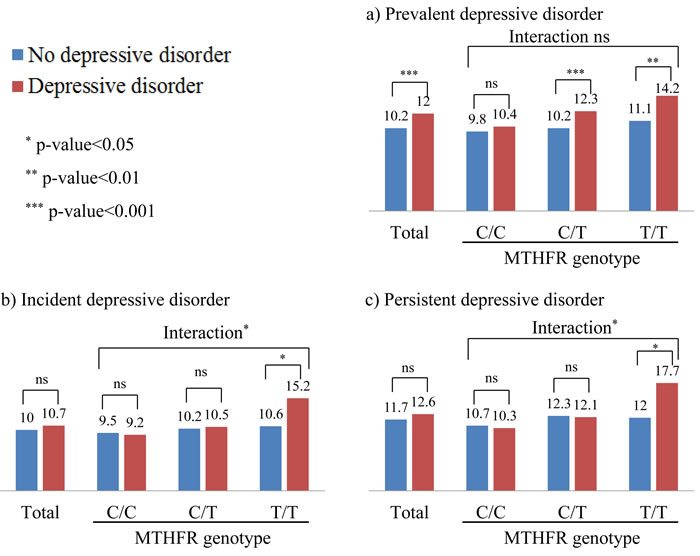 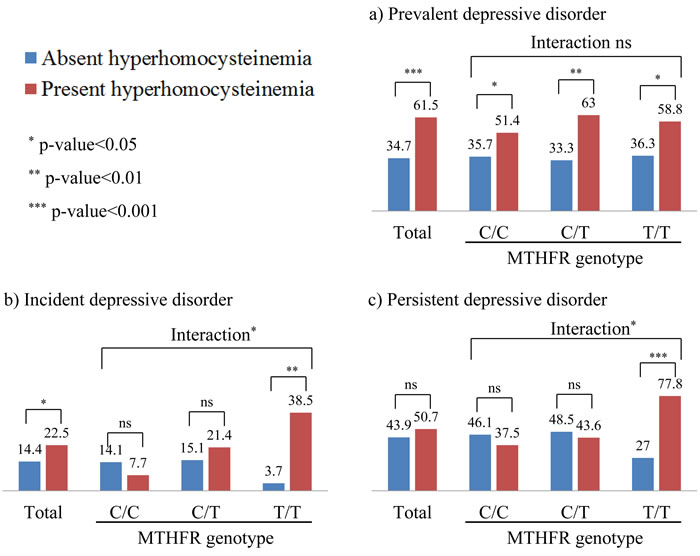 Analyses were repeated after excluding participants reporting a history of previous depression (N = 14), and no substantial differences were found in any models (data not shown).

Higher homocysteine levels and clinical hyperhomocysteinemia (above 15.0μmol/l) were significantly associated with prevalent depressive disorder shortly after ACS. Our findings are comparable to previous cross-sectional reports from unselected depressive patients [7, 17]. In addition, these results were irrespective of MTHFR genotype, and were not changed after excluding participants with a history of previous depression. Plausible explanations for this association were as follows. Homocysteine was found to be associated with dopamine metabolisim, serotonin deficiencies and oxidative stress which could be basis for depression occurrence [18, 19]. ACS related hyperhomocysteinemia [4] may predispose ACS patients to biologically vulnerable state for depressive disorders via theses various mechanisms and future research on the exact mechanisms is needed.

A primary role of the MTHFR genotype in the pathogenesis of depression related to ACS was not supported in the present study. However, it is noteworthy that MTHFR genotype significantly modified the associations of higher homocysteine levels with incident and persistent depressive disorder occurring in the chronic phase of ACS, although did not modify that with baseline depressive disorder. Plasma homocysteine levels were significantly higher in participants with higher numbers of T alleles, consistent with previous findings [6, 11, 12, 14]. T allele may confer a propensity to hyperhomocysteinemia which is sustained after the acute phase and acts on risk of depressive disorder over a longer period into the chronic phase of ACS, where general health and functional status become stronger determinants of mood state.

Our study has several strengths as the first evaluation of these questions. We were able to carry out a comprehensive evaluation of homocysteine and MTHFR genotype on the occurrence of depressive disorder in a large number of ACS patients with a prospective design. Additionally, a nested randomized placebo-controlled trial of the prospective study allowed investigation of influences on treatment response. Participants were recruited at baseline consecutively from all eligible patients with a recent ACS and were followed at 1 year thereafter, which reduced the risk of error arising from heterogeneous examination times and therefore increased the sample homogeneity. Depressive disorder was ascertained using a structured diagnostic interview, and all measurement methods for psychiatric and cardiovascular characteristics were well validated. Furthermore, a range of covariates were considered in the analyses. An important limitation is that homocysteine levels were only assayed at baseline and not at follow-up, since depression has been associated more strongly with changes in homocysteine levels over time [8]. Additionally, other psychiatric disorders such as post traumatic disorder was not investigated, which made it inconclusive whether homocysteine was a general marker of psychiatric risk given or whether homocysteine was specific to depression. There are also potential limitations arising from attrition in the recruitment process, and blood analysis was only possible in 84% of the baseline sample, although no differences were found in baseline demographic and clinical characteristics between those with and without this information. The 1-year follow-up was completed in 73% of whole baseline participants. The attrition was only associated with older age and poorer cardiac status, and was not associated with depressive status. It therefore appears that ACS patients with more severe baseline pathology were more likely to be lost to follow-up, which might obscure the associations of interest.

Our results support a role of homocysteine in the pathogenesis of depressive disorder comorbid with ACS independently at acute phase and interactively with MTHFR genotype at chronic phase, and have several potential implications. Plasma homocysteine assays, particularly for clinical hyperhomocysteinemia, might thus have modest clinical utility of screening to identify at-risk groups for depressive disorder in the acute phase of ACS. Our findings may also aid to identify suitable therapeutic interventions. That is, depression comorbid with ACS also leads to very high disease burden, and is difficult to treat [21, 22], and assaying homocysteine and MTHFR genotype might allow more focused interventions for the prevention or management of depressive disorder in the late phase of ACS in more susceptible sub-groups. Trials of long term vitamin supplementation on depressive disorder have been controversial to date [23-25], but based on our findings, supplement effects might be more prominent in those with MTHFR TT genotype, at least in ACS patients. Relationships with the dose, duration and, particularly, constituents of vitamin supplements should therefore be investigated.

Data were drawn for analysis from larger study named the Korean DEPression in ACS (K-DEPACS) study, which also contained a nested randomized controlled trial, the Escitalopram for DEPression in ACS (EsDEPACS) study. The overall design has been described in detail [26], and the recruitment process is summarized in Supplemental Figure S1. The K-DEPACS study was carried out from 2006 to investigate the epidemiology of depression in ACS using a observational prospective design. Participants were consecutively recruited from patients recently hospitalized with ACS (N = 4809) at the Department of Cardiology of Chonnam National University Hospital, Gwangju, South Korea. Patients were treated based on international guidelines for the management of ACS [27] by the study cardiologists. Those who met eligibility criteria and agreed to participate (N = 1152) were assessed for a depressive disorder diagnosis by the study psychiatrists using the Mini-International Neuropsychiatric Interview (MINI) [28] as inpatients within 2 weeks post-ACS, and thereafter as outpatients every 4 weeks up to 12 weeks. Of these, 969 agreed to blood assays and comprised the baseline sample. Of 378 patients with depressive disorder in this sample, 255 also agreed to participate in a 24-week, double-blind, nested randomized placebo-controlled trial of escitalopram efficacy and safety: the EsDEPACS study (ClinicalTrial.gov registry number: NCT00419471). The first patient was enrolled in May 2007 and the last patient completed the follow-up evaluation in March 2013. Examinations were scheduled at baseline, and weeks 4, 8, 12, 16, 20, and 24 thereafter. The details and main results of this trial have been published, in which escitalopram was found to be superior to placebo in reducing depressive symptoms [29]. The remaining 123 patients who declined participation in the trial received conventional medical treatment for ACS only. Detailed eligibility of the K-DEPACS and EsDEPACS studies were described in Supplementary Materials. All participants in the K-DEPACS and EsDEPACS studies were approached for a re-examination of depressive status at 1 year after the baseline evaluation. Written informed consent was collected for the K-DEPACS and EsDEPACS studies, both of which were approved by the Chonnam National University Hospital Institutional Review Board.

Blood samples were collected in a fasting state and were carried out in the mornings where possible. They were drawn into EDTA tubes, and centrifuged, separated into plasma aliquots, and stored at -80 oC within 2 hours of collection. Total plasma homocysteine concentration was measured using commercially available (AxSYM Homocysteine Reagent Pack, Abbott Laboratories, USA) high-performance liquid chromatography. MTHFR C677T genotype was determined by a polymerase chain reaction (PCR) and HinFI restriction enzyme digestion as described previously8 with miner modification. HinfI digestion (1.5U/25μL reaction mixture) was performed directly in the PCR tube at 37 oC for 4 hours before analysis of restriction fragments by polyacrylamide gel electrophoresis.

Characteristics potentially acting as confounding or mediating factors for associations between depressive disorder and ACS were evaluated at baseline. Data on age, gender, duration of education, living status (living alone or not), accommodation tenure (owned or rented), current occupation (employed or not), and previous and family histories of depression were obtained. The following cardiovascular risk factors were ascertained: previous and family histories of ACS, diagnosed hypertension and diabetes mellitus, hypercholesterolemia by fasting serum total cholesterol level (>200mg/dL), obesity by measured body mass index (BMI), and reported current smoking status. For current cardiac status, severity of ACS was estimated by the Killip classification [30], left ventricular ejection fraction (LVEF) was estimated using echocardiography, and serum cardiac biomarkers on troponin I and creatine kinase-MB (CK-MB) were measured. Other factors can affect the homocysteine concentrations were considered: serum creatinine level and vitamin supplementation.