Mechanical stress may affect the balance between tissue destruction and tissue regeneration. Under normal physiologic conditions, homeostasis of the periodontium is maintained by appropriate mechanical stimulation caused by occlusal load [1]. In contrast, abnormal mechanical stimulations aroused from occlusal overloading or improper orthodontic treatment may induce inflammatory response, which may subsequently lead to a pathological process in periodontium [2].

Previous studies reported that large numbers of inflammatory mediators, including pro-inflammatory cytokines (such as IL-1β, IL-6, IL-8 and tumor necrosis factor-alpha (TNF-α)), adenosine tri-phosphate (ATP), prostaglandin E2 (PGE2) and nitric oxide, were found in various cell types upon mechanical stimulation [3–5]. Among all these mediators, the release of IL-1β is considered significant in the initiation and regulation of inflammation [6]. Recently, a formation of a multisubunit complex named ‘inflammasome’ was reported, which consists of pro-inflammatory caspase(s), nucleotide-binding oligomerization domain-like receptor family members containing pyrin domain (NLRP), and the adaptor molecule apoptosis-associated speck-like protein containing a caspase-recruitment domain (ASC) [7, 8]. Among the known inflammasome complexes, NLRP1 and NLRP3 inflammasomes were found to function in generation of the inflammatory cytokine IL-1β [9, 10]. It was reported that mechanical stretch stimulated lung alveolar macrophages, which in turn activated caspase-1 in NLRP3 inflammasome, leading to the activation and release of IL-1β [11].

NLRP1 and NLRP3 expressed in HPDLCs in response to cyclic stretch 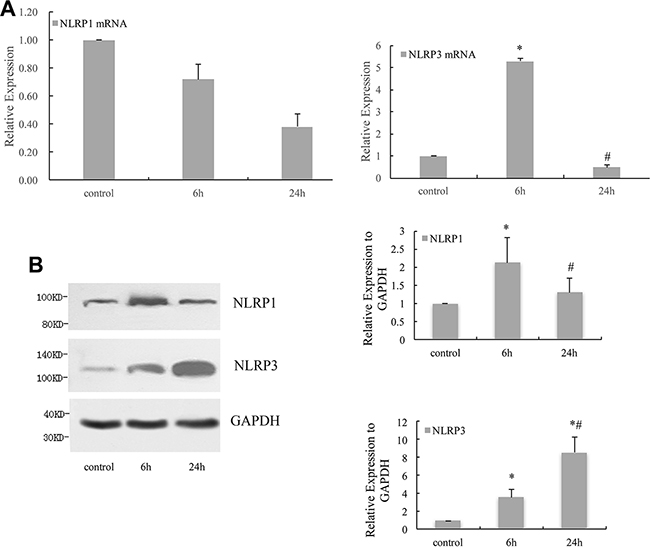 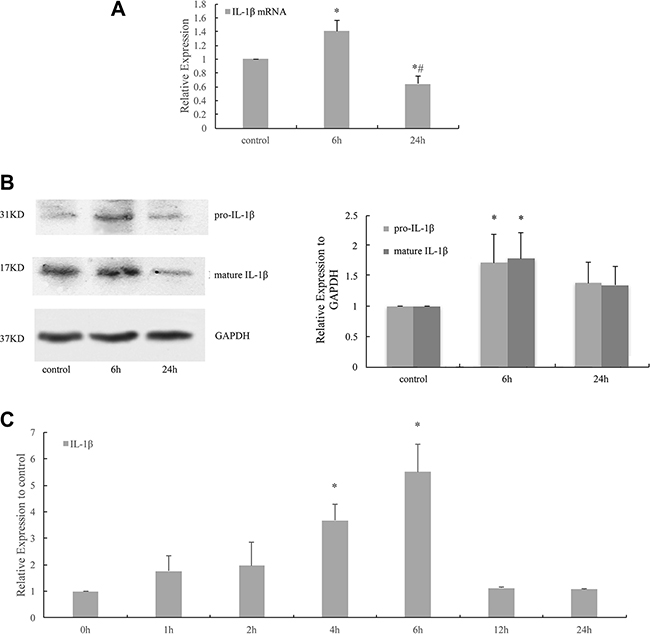 Figure 2: Cyclic stretch induced the activation and release of IL-1β in HPDLCs. (A) Real-time PCR result revealed that the expression of IL-1β mRNA increased in response to 6 h cyclic stretch and was reduced after 24 h cyclic stretch. (B) Western blot analyses showed that 6 h cyclic stretch increased the expressions of pro-IL-1β and mature IL-1β proteins. GAPDH was used as a loading control. (C) ELISA assay verified the appearance of IL-1β in the cell-culture medium of HPDLCs in response to 1, 2, 4, 6, 12 and 24 h cyclic stretches and showed that both 4 and 6 h stretches stimulated the release of IL-1β. The appearance of IL-1β in the cell-culture medium of HPDLCs reached a peak after 6 h stretch and then decreased to the control level after 12 h stretch. The results were quantified from at least 3 independent experiments and expressed as mean ± S.E. Statistical significance was calculated using one-way ANOVA with multiple comparisons. *P < 0.05 versus control group; #P< 0.05 versus 6 h group. 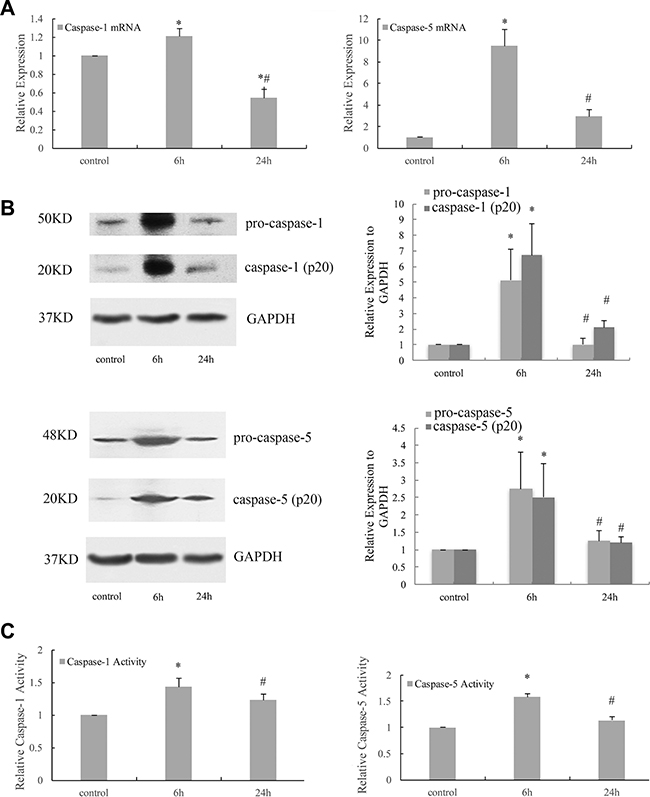 Cyclic stretch promoted the formation and activation of inflammasome in HPDLCs 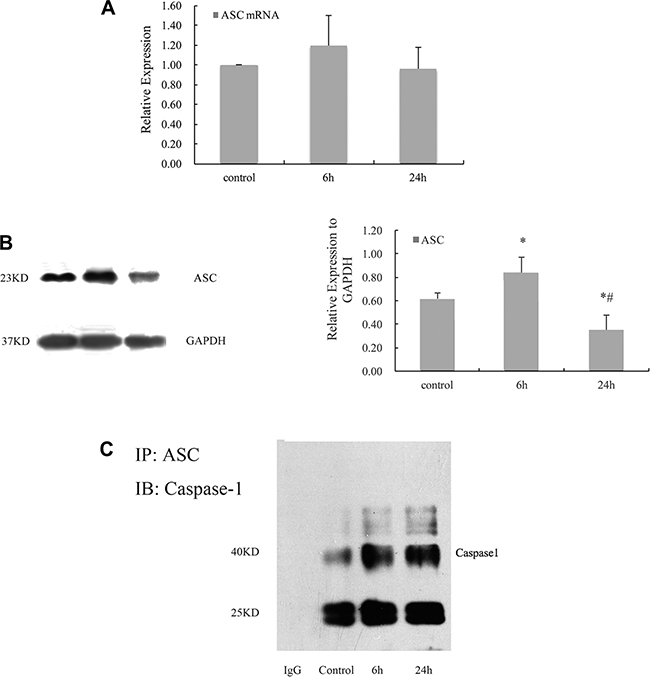 Figure 4: Cyclic stretch promoted the formation and activation of inflammasome in HPDLCs. (A) Real-time PCR result showed that ASC mRNA did not change significantly in response to cyclic stretch. (B) Western blot analysis showed that 6 h cyclic stretch increased the expression of ASC, and 24 h cyclic stretch reduced its expression. GAPDH was used as a loading control. (C) The assembly of inflammasome was detected using immunoprecipitation (IP) with anti-ASC Ab followed by immunoblotting (IB) for caspase-1. The results were quantified from at least 3 independent experiments and expressed as mean ± S.E. Statistical significance was calculated using one-way ANOVA with multiple comparisons. *P < 0.05 versus control group; #P < 0.05 versus 6 h group. 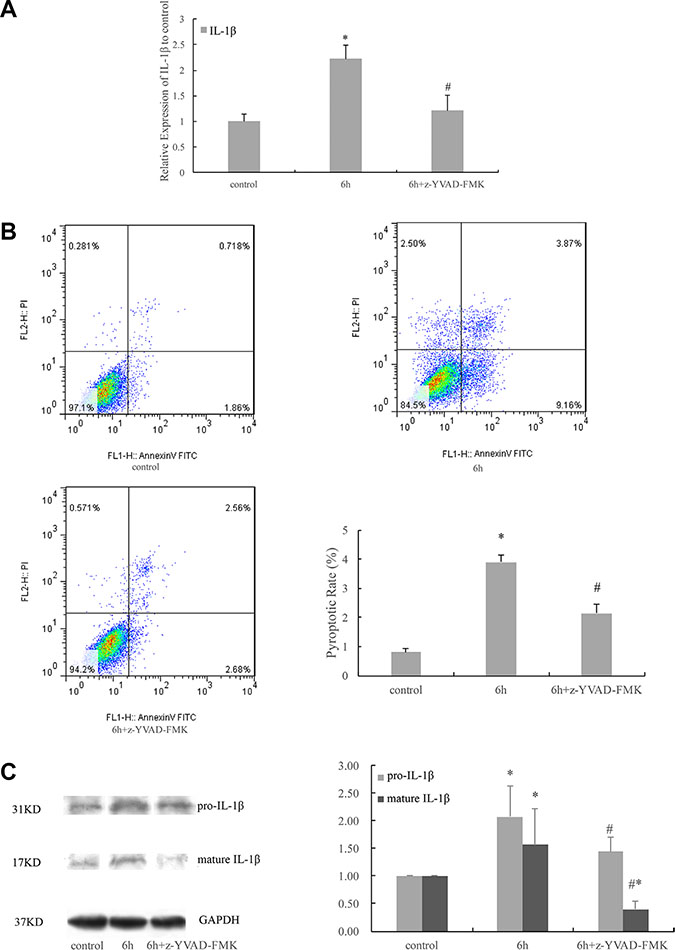 To our knowledge, this is the first study to probe the involvement of NLRP inflammasome signaling in periodontal inflammation provoked by mechanical stretch. We demonstrated that the expressions of IL-1β, caspase-1, caspase-5, ASC, NLRP1, and NLRP3 were induced in HPDLCs by mechanical stretch loading.

In the present study, the expressions of IL-1β mRNA and protein in HPDLCs, as well as the secreted IL-1β all remarkably increased in response to stretch. This was in agreement with previous reports that HPDLCs released pro-inflammatory cytokines, including TNF-α, receptor activator of nuclear factor-kappaB ligand (RANKL), matrix metalloproteinase (MMP), cyclooxygenase-2 (COX-2) and IL-6, during orthodontic tooth movement [13, 21–23]. Moreover, high level of IL-1 was also found in HPDLCs in response to mechanical stress both in vivo and in vitro [12, 14, 24]. It was shown that the IL-1β in HPDLCs, through stimulation of COX-2 expression and PGE2 synthesis, activated IL-8 and promoted the expression of MMPs, so as to promote the damage of periodontal soft tissue and the absorption of periodontal bone [13, 15, 23]. Taken together, it was speculated that periodontal inflammation might be induced by mechanical stretch with IL-1β activation as the pivot in this process.

Inflammasomes are large cytosolic multiprotein complexes that assemble in response to detection of infection- or stress-associated stimuli and lead to the caspase-1-mediated inflammatory responses, including activation of pro-inflammatory cytokines IL-1β and IL-18, and initiation of an inflammatory form of cell death referred to as pyroptosis, which features pore formation in the plasma membrance [25]. (Figure 6) To date the function of most NLRs remains elusive, among which NLRP1 and NLRP3 are the most extensively studied and are known to form inflammasomes that activate caspase-1 [26]. 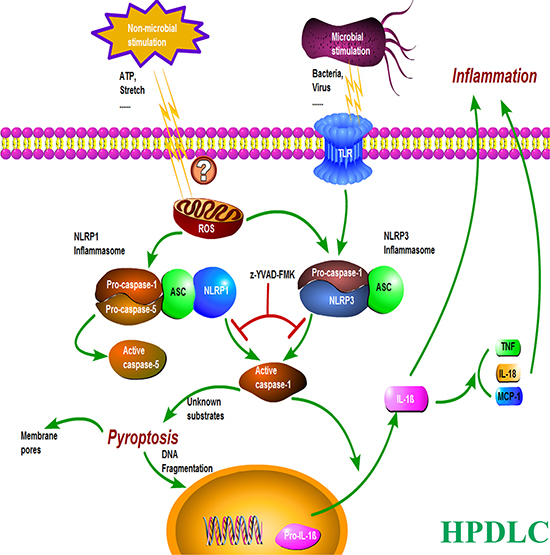 Figure 6: A proposed model illustrating the mechanism of inflammation and pyroptosis via NLRP3 and NLRP1 inflammasomes in HPDLCs.

Our study is limited in that only one downstream NLRP target (IL-1β) was investigated. IL-1β is considered significant in the initiation and regulation of inflammation, so the detection of IL-1β was selected. Another limitation is that only the inhibitor of caspase-1 was used in the inhibitory experiment. As proteolytic processing for caspase-1 is the hallmark of NLRP inflammasome activation [30], the specific role of caspase-1 was detected in the present study.

In summary, to our knowledge, this is the first study demonstrated that NLRP inflammasomes were activated and contributed to the stretch-induced inflammatory response in HPDLCs. Inflammation in the periodontal ligament may contribute to the resorption of alveolar bone, possibly facilitate the development of apical periodontitis. And periodontal inflammation has also been suggested in the recent years as a potential factor influencing the development of many system diseases [31, 32]. As inflammasomes have been reported to be involved in both programmed cell death and inflammation, further studies are required to elucidate the exact roles and signaling pathway of inflammasomes in stretch-induced periodontal inflammation and programmed cell death.

HPDLCs were obtained from healthy premolars extracted from children aged 11–13 year for orthodontic reasons, after informed consents were obtained from their parents. The protocol for harvesting human periodontal tissue from extracted teeth was approved by the Ethics Committee of Ninth People’s Hospital, Shanghai Jiao Tong University School of Medicine (Reference: [2008]17). HPDLCs were cultured as previously described [33]. HPDL on the middle of the root was acquired with a sterile scalpel. Then pieces of HPDL were attached to a cell culture dish and cultured in Dulbecco’s modification of Eagle’s medium (DMEM, Gibco, Grand Island, NY, USA) supplemented with 20% (v/v) fetal bovine serum (FBS, Hyclone, Logan, UT, USA) and five-fold reinforced antibiotics (500 U/mL penicillin and 500 μg/mL streptomycin, Sigma-Aldrich, St. Louis, MO, USA) at 37°C in a humidified atmosphere of air containing 5% CO2. Cells that grew out from the extracts were passaged in DMEM supplemented with 10% (v/v) FBS and antibiotics (100 U/mL penicillin and 100 μg/mL streptomycin). Cells at passage 4–6 were used in the present study.

For cyclic stretch loading experiments, HPDLCs were seeded onto six-well Bioflex plates (Flexcell International, Hillsborough, NC, USA) at a density of 3 × 105 cells/well. Cells reached confluence following 3 d of culture and then were subjected to cyclic stretch using a Flexcell Tension Plus system (FX-5000T, Flexcell International) with a 20% elongation magnitude for 6 or 24 h. Cells cultured on the same kind of plates but without stretch loading were used as time-matched control cells. The loading frequency of 6 cycles/min (5 s stretch and 5 s relaxation) was the same to that in our previous studies [17, 18]. Three independent loading experiments were carried out in every group.

After the application of cyclic stretch, total RNA was extracted from HPDLCs using Trizol reagent (Life Technologies), according to manufacturer’s recommendations. cDNA was synthesized using a Reverse Transcription Kit (Toyobo, Tokyo, Japan), according to the manufacturer’s instructions. Real-time PCR was carried out using an ABI 7500 Real-Time PCR System (Applied Biosystems, Sunnyvale, CA, USA). To control variability in amplification due to differences in starting mRNA concentrations, β-actin was used as an internal control. The designs of PCR primers are shown in Table 1.

After the application of cyclic stretch, the protein concentration of IL-1β in the culture supernatants from cultured HPDLCs were estimated using an IL-1β ELISA kit (R&D Systems, Minneapolis, MN, USA), according to the manufacturer’s instruction. 150 μL cell-culture medium was collected from each sample and added into well of the microplate, and then the microplate was washed with Wash Buffer. Each well was incubated with IL-1β high sensitivity Conjugate for 2 h at room temperature on the shaker and then was washed with Wash Buffer. 50 μL of Substrate Solution was added into each well, and incubated for 1 h at room temperature on the shaker. After Stop Solution was added, the optical density of each well was determined using a microplate reader (Elx800, Biotec, Vermont, USA) set to 490 nm.

Caspases’ activities were measured using the corresponding caspase colorimetric assay kit (Biovision Research Products, Mountain View, CA, USA), according to the manufacturer’s instruction. After the application of cyclic stretch, the cells were washed with PBS and suspended in 50 ul of chilled cell lysis buffer for 10 min on ice. The cell suspension was homogenized by trituration with a syringe before being centrifuged for 1 min in a microcentrifuge (10,000 g). Supernatant was harvested and transferred to a fresh tube and kept on ice for immediate assay. The protein content of the supernatant was quantified with the Micro BCATM protein assay reagent kit (Pierce). Protein (100 ug) diluted in 50 ul cell lysis buffer was added to 50 ul of reaction buffer containing 10 mM DL-Dithiothreito (DTT), and then 5 ul of 4 mM p-nitroanilide (pNA) (YVAD-pNA for caspase-1, WEHD-pNA for caspase-5) was added into the buffer. The mixture was incubated at 37°C for 1 h. The absorbance at 405 nm was measured using a microplate reader (Elx800, Biotec).

50 μl of protein concentrations of the samples was incubated with 1 μl anti-ASC antibody (sc-22514-R, Santa Cruz, CA, USA) overnight at 4°C. This reaction mixture was then incubated with protein A magnetic beads (sc-2003, Santa Cruz) for 30 min at 4°C. Precipitates were washed three times with washing buffer and then eluted from protein A magnetic beads by boiling with 1 × SDS for 10 min at 90–100°C. Western blot analysis was used to evaluate the expression of caspase-1 with an anti-caspase-1 antibody (1:1000, Cell Signaling Technology). Homophytic IgG was used as the negative control in Western blot analysis.

For inhibitory studies, HPDLCs were pre-incubated with 2 mM caspase-1 inhibitor (z-YVAD-FMK) (Biovision Research Products) for 1 h before cyclic stretch loading. HPDLCs under the same conditions but without inhibitor were used as non-inhibiting controls.

The results were presented as mean ± standard deviation (n = 3) and statistically analyzed with one-way analysis of variance (ANOVA) followed by the least-significant difference (LSD) test or the t test for paired samples. P values of less than 0.05 were considered statistically significant.