Biological functions of macrophage-derived Wnt5a, and its roles in human diseases

Human Wnt family include 19 members of highly conserved secreted proteins, which are critical to embryo development and adult tissue homeostasis [1]. Some Wnt proteins, such as Wnt1 and Wnt3a, activate canonical Wnt pathway. They bind to their membrane receptor Frizzleds (Fzds) and co-receptor lipoprotein receptor-related protein 5/6 (LRP5/6), leading to β-catenin accumulation in the cytoplasm and translocation into the nucleus [2]. However, other proteins, such as Wnt5a and Wnt11, do not trigger Wnt/β-catenin pathway. Generally, pathways stimulated by these proteins are called non-canonical Wnt pathways.

Macrophages are crucial for homeostasis, inflammation and immunity. As professional phagocytic cells, macrophages engulf and degrade cellular debris, dead/damaged cells, foreign substances and microbes. Moreover, macrophages initiate immune response to invading microbes and tissue regeneration upon injury. Macrophages can be found in all organs and take various forms, such as microglia, Kupffer cells, alveolar macrophages, Langerhans cells, histiocytes and others. For a long time, it has been believed that tissue-resident macrophages come from bone marrow derived monocytes (BMDM). However, recently accumulating evidence reveals that most of these tissue-resident macrophages arise from embryonic precursors which reside in these tissues prior to birth [3].

Non-canonical Wnt5a pathways (Figure 1) are usually initiated by the binding of Wnt5a to its receptor Fzds, including Fzd1-5[4-7], and Fzd7 [8, 9]. The intracellular pathways are mediated by some molecules, such as Ca2+, CaMKII, PKC and JNK [7, 10]. Ror1/2 are receptor tyrosine kinases, possessing an extracellular cysteine-rich domain (CRD) similar to the Wnt-binding sites of Fzds [11]. Wnt5a-Ror2 activates JNK signaling [12, 13] and TGF-β signaling [14], whereas has no effect on intracellar Ca2+ level [6]. Fzds and Ror1/2 can form receptor complexes, which transduce Wnt5a signaling to activate Rho GTPase [8]. Receptor tyrosine kinase Ryk is another Wnt5a receptor [15], involved in the activation of TGF-β-SMAD signaling [16] and AKT signaling [9]. Fzds [5], Ror1/2 [17] and Ryk [18] all mediate Wnt5a-planar cell polarity (PCP) signaling, and both Ror2 [17] and Ryk [18] can form complex with Vangl2, a key component in PCP. 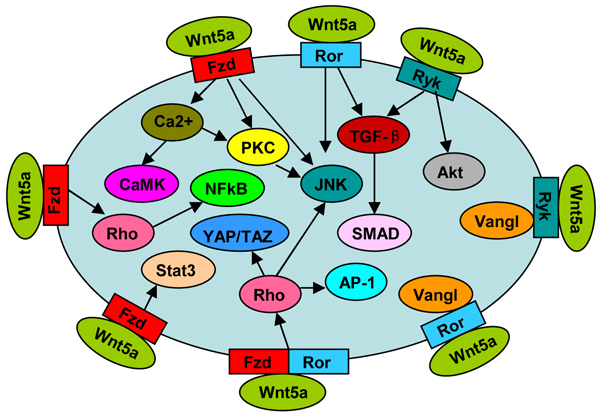 Basal Wnt5a expression was observed in peripheral blood mononuclear cell (PBMC) [21], PBMC-derived macrophage [22, 23], bone marrow-derived macrophage (BMDM) [24], alveolar macrophage [22], peritoneal macrophage, microglia [25] and macrophage cell line Raw264.7 [24]. Moreover, Wnt5a receptor Fzd5 expression was also found in macrophages [22-24], suggesting that Wnt5a can affect macrophages in an autocrinal manner. Fzd5 expression in macrophages also indicates that Wnt5a from other cells, such as tumor cells, can exert effects on macrophages in a paracrinal manner. Wnt5a expression in macrophages could be upregulated in response to bacterial stimulation, including LPS [22, 23, 26, 27]. This process depended on Toll-like receptors (TLRs) and NF-κB signaling [22, 26]. IFN-γ synergized with LPS in Wnt5a induction, which could be blocked by anti-inflammatory factor IL-10 [23, 26]. Intriguingly, in murine BMDM and murine microglia there was no upregulation of Wnt5a but Wnt6 [25, 28].

Monocytes can differentiate into macrophages or dendrite cells (DCs) dependent on the stimulator. Under the stimulation of monocyte-colony stimulator factor (GM-CSF), less bone marrow-derived monocytes from Wnt5a monocyte conditional knockout mice differentiated into F4/80+ and CD11b+ macrophages, compared with those from control mice, demonstrating that Wnt5a is involved in macrophage differentiation[38]. In addition, Wnt5a-negative BMDMs displayed decreased survival, which was related to the reduced expression of anti-apoptotic Bcl2 and Bcl-xl, and the increased expression of pro-apoptotic Bax [24]. Interestingly, β-catenin was also involved in macrophage proliferation and survival [39]. It is unknown whether interactions exist between the two Wnt pathways in macrophages.

Wnt5a inhibition reduced IFN-β and IFN-γ production by macrophages, and the underlying mechanism was related to the decreased IκB kinase β (IKK2) activity, which further resulted in suppressed IκB degradation, and p65 nuclear translocation [24]. As p65 can bind to CD14 enhancer/promoter, Wnt5a pathway blocking also inhibited the expression of CD14 [24], a key component in TLR-dependent immune responses upon microbial infection. Wnt5a suppression also impaired macrophage phagocytosis, accompanied by a decrease in TNF-α and IL-6 production, and an increase in IL-10 secretion [40]. These findings suggest that Wnt5a may be crucial to the maintenance of macrophage immune function.

It has been accepted that Wnt5a is a pro-inflammatory factor, based on the finding that Wnt5a induced pro-inflammatory cytokines in a variety of cell types, such as macrophages [23, 37], endothelial cells (ECs) [41], HDPCs [32], BMSCs [29], and synovial fibroblasts [42]. These cytokines include IL-6, IL-1α and IL-1β, which are extensively involved in human inflammatory diseases. Wnt5a also induced chemokines, such as CCL2 and IL-8 [23, 29, 32, 37, 41, 42], indicating that Wnt5a has a potential to recruit macrophages and neutrophils, which amplify inflammatory responses. Several signalings were identified to mediate the induction process, including Ca2+/CaMKII [23], Ca2+/PKC [41], NFκB [29, 32, 41], and MAPK [29, 32].

However, Wnt5a exhibits an inhibitory effect on angiogenesis in some other conditions. One mechanism is related to VEGF inhibitory receptor Flt1 (fms-like tyrosine kinase-1), also called VEGFR1, which has a higher affinity with VEGF than Flk1 (VEGFR2), but has limited signaling capacity (Figure 2B). Macrophage-derived Wnt5a induced Flt1 expression, which suppressed angiogenesis in postnatal retina and during wound repair [59, 60]. It was also shown that macrophage Raw264.7 expressed membrane and soluble Flt1 under the stimulation of exogenous Wnt5a [59]. Furthermore, macrophage-derived Wnt5a inhibited ischemia-induced angiogenesis by upregulating VEGF-A165b, an anti-angiogenic isoform of VEGF-A [61] (Figure 2C). 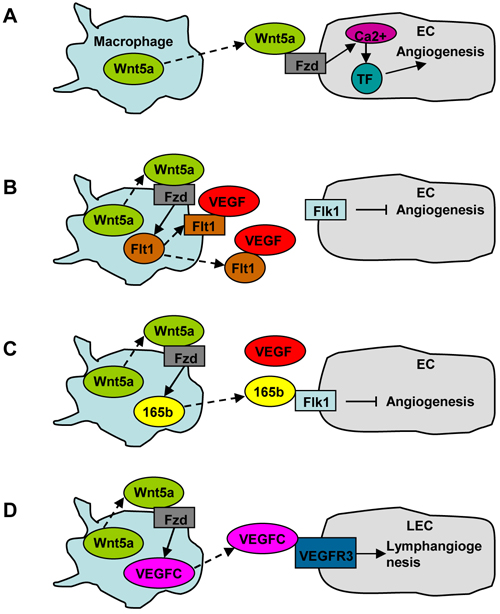 Animal studies have demonstrated that Wnt5a is an important player in insulin resistance and diabetes. Early evidence came from a study on SFRP5 knockout mice. SFRP5 is a Wnt5a antagonist, therefore, SFRP5 expression loss exaggerated the pro-inflammatory effects of Wnt5a, which was shown to be induced by obesity [44]. Administration of exogenous SFRP5 or ablation of JNK ameliorated insulin resistance, accompanied by a reduction in adipose tissue inflammation [44]. Similar results were observed in whole body Wnt5a knockout mice, which showed that Wnt5a ablation attenuated high-fat/high-sucrose (HFHS)-induced insulin resistance, and these mice displayed decreased expression of TNF-α, CCL2, and IL-6 in adipose tissue [43]. 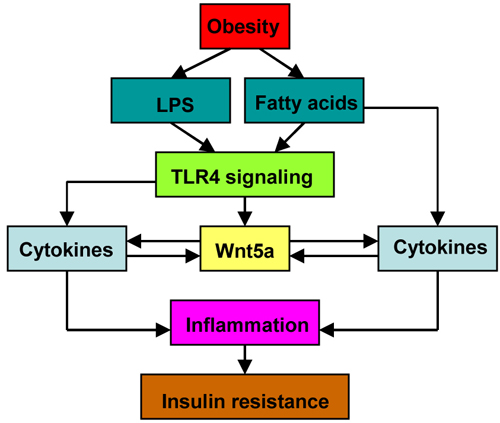 As an inflammatory disease, atherosclerosis is characterized by the accumulation of macrophages in the intima. Immunohistochemical analysis showed Wnt5a expression in human and murine atherosclerotic lesions, especially in the areas of macrophage infiltration, and was coincident with TLR-4 expression [74]. Wnt5a induction may be attributed to ox-LDL, which was shown to stimulate Wnt5a expression in human macrophages in vitro [33]. Wnt5a level was significantly higher in serum from atherosclerotic patients compared with healthy persons, and was correlated with the severity of atherosclerotic lesions [33, 74]. Furthermore, Wnt5a was involved in vascular calcification, a hallmark of advanced atherosclerosis [75]. Importantly, anti-Wnt5a treatment inhibited atherosclerotic development in apolipoprotein E-deficient (ApoE-/-) mice fed a high-fat diet, accompanied by reduced expression of inflammatory cytokines [76].

Wnt5a displays multifunctional in human malignancies. Wnt5a loss was found in leukemias [77, 78], ovarian cancers [79], and thyroid carcinomas [80]. In these malignancies, Wnt5a acted as a tumor suppressor mainly via antagonizing carcinogenetic Wnt/β-catenin pathway. However, in other human tumors, such as melanoma and pancreatic cancer, Wnt5a increased tumor cell invasion and migration through actin reorganization, cell adhesion and epithelial to mesenchymal transition (EMT) [81-83]. These studies indicate that Wnt5a may inhibit β-catenin-related carcinogenesis, but promote tumor progression via β-catenin-independent mechanisms. The exact role of Wnt5a in human cancers depends on the tumor context. 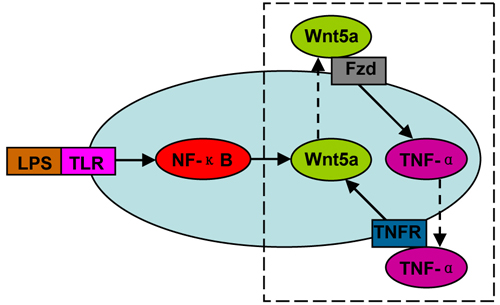 Figure 4 The positive feedback loop between Wnt5a and inflammatory cytokines (e.g. TNF-α). This loop can be triggered by LPS-TLR-NF-κB signaling, and amplify the inflammatory responses.

LPS induced Wnt5a production by macrophages via TLR-NF-κB signaling, and Wnt5a signaling inhibition reduced IFN-β and IFN-γ production and CD14 expression by macrophages, suggesting that Wnt5a may be a component in macrophage innate immunity [24]. Inconsistently, although Wnt5a-Fzd5 signaling enhanced macrophage phagocytosis, it was not accompanied by an increase in bacteria killing, and on the contrary, Wnt5a inhibitor IWP-2 reduced macrophage phagocytosis, but increased bacterial killing [40]. These finding indicate that more investigations are needed to explore the exact role of macrophage-derived Wnt5a in infection and sepsis.

Tumor cell-derived Wnt5a has been demonstrated to play a dual role in human cancer initiation and progression. However, few studies have focused on the exact role of TAM-derived Wnt5a. Does TAM-derived Wnt5a promote cancer cell migration by inducing angiogenesis and lymphangiogenesis? Does TAM-derive Wnt5a trigger local inflammation in the tumor microenvironment? Actually, inflammation has been considered as a hallmark of cancer. And how does TAM-derive Wnt5a regulate TAM immune function? A reasonable speculation is that Wnt5a may in part mediate the action of TAMs on cancers, and more studies are needed to answer these questions.

There is no financial conflict of interest concerning this study.