Hepatocyte growth factor activator inhibitor type 1 (HAI-1), encoded by the Spint1 gene, is a membrane-bound serine protease inhibitor expressed on the epithelial cell surface. We have previously reported that the intestine-specific Spint1-deleted ApcMin/+ mice showed accelerated formation of intestinal tumors. In this study, we focused on the role of nuclear factor-κB (NF-κB) signaling in the HAI-1 loss-induced tumor susceptibility. In the HAI-1-deficient intestine, inflammatory cytokines, such as tumor necrosis factor-α and interleukin-6, were upregulated in normal mucosa. Furthermore, increased nuclear translocation of NF-κB was observed in both normal mucosa and tumor tissues of HAI-1-deficient ApcMin/+ intestines, and an NF-κB target gene, such as urokinase-type plasminogen activator, was upregulated in the HAI-1-deficient tumor tissues. Thus, we investigated the effect of dehydroxymethylepoxyquinomicin (DHMEQ), a synthetic inhibitor of NF-κB, on intestinal HAI-1-deficient ApcMin/+ mice. Treatment with DHMEQ reduced the formation of intestinal tumors compared with vehicle control in the HAI-1-deficient ApcMin/+ mice. These results suggested that insufficient HAI-1 function promotes intestinal carcinogenesis by activating NF-κB signaling.

Chronic inflammation plays an important role in cancer development [1]. In particular, colorectal carcinoma (CRC) is strongly associated with an inflammatory microenvironment and used as a model of the link between chronic inflammation and cancer. Many studies have shown that inflammatory responses promote intestinal carcinogenesis by altering the intestinal microenvironment [2]. Indeed, experimental colitis enhances intestinal carcinogenesis in ApcMin/+ mice through an inducible nitric oxide synthase (iNOS)-dependent mechanism [3]. As Apc gene mutations are responsible for the familial adenomatous polyposis, and more than 80% of CRC harbor mutations in APC, the ApcMin/+ mice model is considered a relevant intestinal carcinogenesis model [4–5].

Nuclear factor (NF)-κB is a family of transcription factors that regulate the expression of genes involved in cell growth and survival, stress response, and inflammation [6]. For example, urokinase-type plasminogen activator (uPA); vascular endothelial growth factor; and some of the pro-inflammatory factors, such as interleukin-1 (IL-1), tumor necrosis factor (TNF)-α, and iNOS, are regulated by NF-κB [7]. In mammals, NF-κB is composed of RelA (p65), RelB, c-Rel, NF-κB1 (p105/P50), and NF-κB2 (p100/P52). These proteins form homo- or heterodimers. Among them, RelA is the most important subunit of the NF-κB family. Recently, it has become clear that NF-κB signaling plays important roles in the development and progression of cancer [8–10]. NF-κB controls the ability of both preneoplastic and malignant cells to resist apoptosis. It may also regulate tumor angiogenesis and invasiveness. Regarding the effect of NF-κB signaling in colon cancer, significant evidence suggests that NF-κB signaling plays a role in colorectal cancer promotion [2, 11]. Moreover, the activation of NF-κB is reported in over 50% of CRCs [12], suggesting that NF-κB signaling may be a promising therapeutic target in CRCs. Dehydroxymethylepoxyquinomicin (DHMEQ) is a synthetic small molecule that inhibits nuclear translocation of RelA. Previous studies showed that DHMEQ inhibits various types of inflammation and cancer cell growth [13–26].

HAI-1 is a membrane-associated Kunitz-type serine protease inhibitor that is expressed on most epithelial cells and placental cytotrophoblasts [27]. We have previously reported that intestinal barrier function was decreased in intestine-specific HAI-1-deficient mice, and these mice showed increased susceptibility of DSS-induced colitis [28]. Moreover, the loss of HAI-1 accelerated tumor formation both in an inflammation-associated mice colon carcinogenesis model and in a mutant Apc model [29]. However, the molecular mechanism of increased tumor formation in HAI-1-deficient mice is still unclear. Because it was reported that mucosal damage plays a role in the pathogenesis of colitis and CRC [12], we speculated that in the HAI-1-deficient intestine, the inflammatory response was induced and NF-κB signaling was activated, which involved HAI-1 loss-induced acceleration of tumor formation.

We have previously reported that the loss of HAI-1 in intestinal epithelial cells altered intestinal barrier function and increased susceptibility to experimental colitis [28]. Therefore, we hypothesized that NF-κB signaling is activated in the HAI-1-deficient intestine. To confirm this hypothesis, we evaluated the nuclear translocation of RelA/p65, the subunit of NF-κB, using Spint1LoxP/LoxP/Villin-Cre+/0/ ApcMin/+ mice (hereafter HAI-1-deficient ApcMin/+ mice) at 15 weeks of age, the same mice as in our previous study [29]. The defect of HAI-1 protein was confirmed by immunohistochemistry (Supplementary Figure S1). In normal mucosa of the small intestine, an increased number of nuclear RelA/p65-positive cells were observed in both epithelial and stromal components of HAI-1-deficient ApcMin/+ mucosa compared to control ApcMin/+ mucosa (Figure 1A). In tumor tissues, the nuclear translocation of RelA/p65 was also increased in both tumor cells and stromal cells of the HAI-1-deficient intestine (Figure 1B). We also examined the expression of NF-κB target genes, such as TNF-α, IL-6, and uPA. In tumor tissue, the expression of TNF-α and IL-6 was increased both in control mice and HAI-1-deficient mice. However, in the non-tumor mucosa, the expression levels of these genes were significantly increased in HAI-1-deficient mice compared with control mice (Figure 1C, 1D). The uPA expression was upregulated both in non-tumor mucosa and tumor tissue in HAI-1 deficient mice (Figure 1C, 1D). 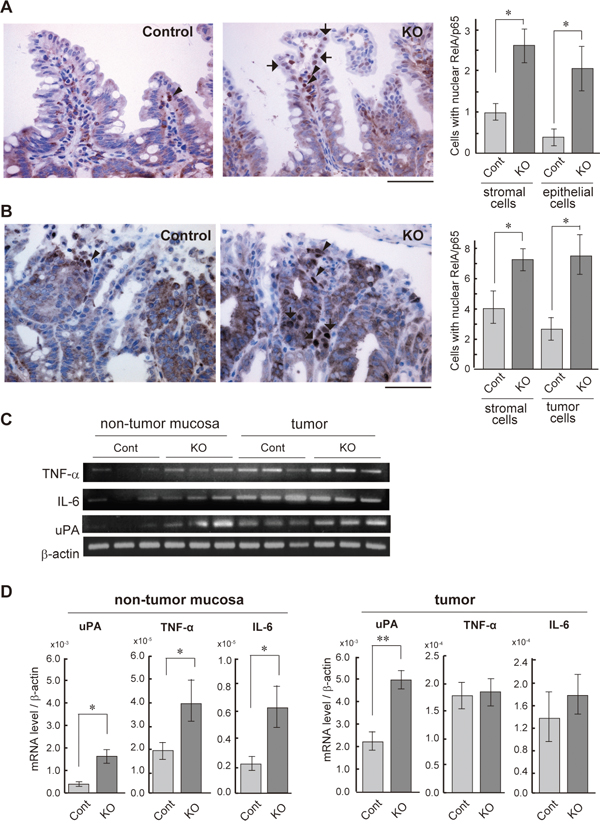 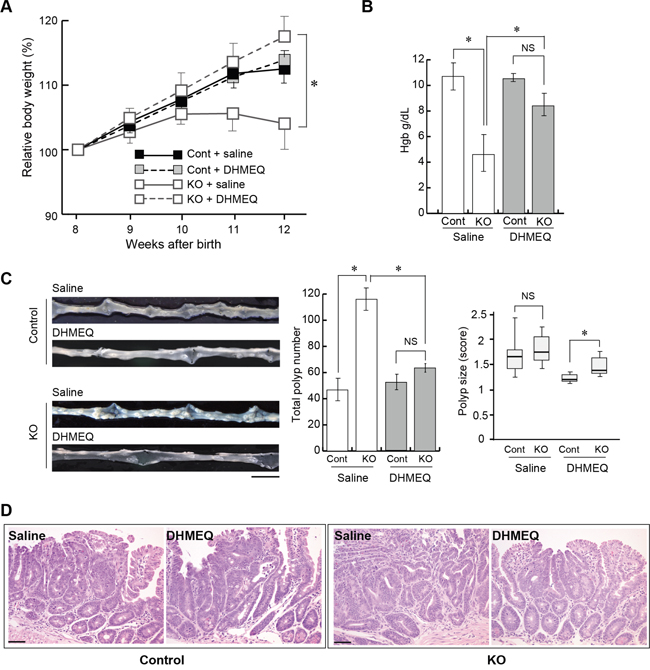 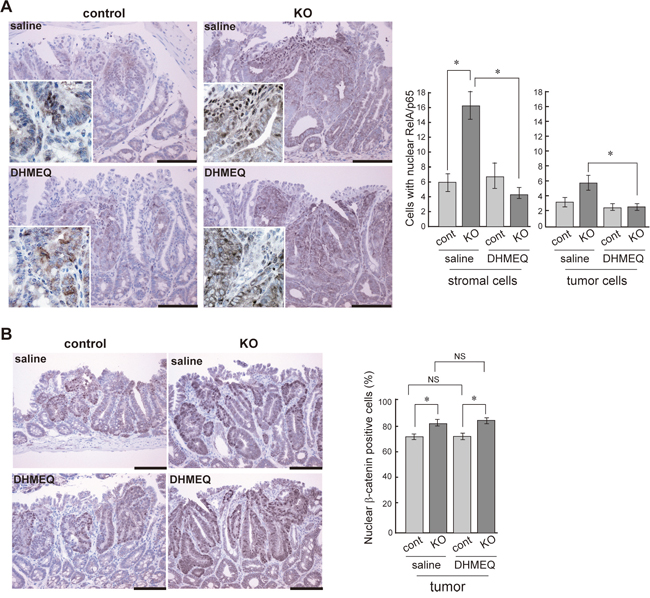 Figure 3: Effect of DHMEQ on nuclear translocation of RelA/p65 and β-catenin in HAI-1-deficient ApcMin/+ mice tumor. Immunostaining of RelA/p65 (A), and β-catenin (B) of control and KO tumor before and after DHMEQ treatment. The enlarged image is also shown as an inset. Bar, 100 μm. *, p < 0.01. NS, not significant.

In this study, we showed that loss of HAI-1 in the intestine leads to activation of NF-κB signaling. Treatment with DHMEQ, a synthesized small molecule inhibitor of NF-κB, alleviated the HAI-1 loss-induced acceleration of tumor formation in Apc mutant mice. Consequently, DHMEQ improved health parameters, such as body weight and hemoglobin concentration, in HAI-1-deficient ApcMin/+ mice. This study also revealed that DHMEQ has no effect on tumor incidence in control mice. Because it has been reported that activation of NF-κB signaling in intestinal epithelial cells and lamina propria macrophages play a major role in the development of colitis-associated cancer (CAC) in humans [11], this study indicates that DHMEQ or its derivatives may have an implication in CRC prevention and therapy.

In summary, we demonstrated that treatment with DHMEQ, a small molecule inhibitor of NF-κB, reduced tumor formation and improved the health condition without adverse side effects in HAI-1-deficient ApcMin/+ mice. This suggests that DHMEQ serves as a promising agent for the treatment of NF-κB-activated colon cancer.

ApcMin/+ mice were used for analyzing the effect of DHMEQ, a small molecule inhibitor of NF-κB. Eight-week-old male HAI-1/Spint1-deficient and control ApcMin/+ mice were injected intraperitoneally with 10 mg/kg DHMEQ three times per week and were sacrificed 12 weeks after birth and autopsied to evaluate the number and sizes of tumors formed. Scoring of tumor size was calculated as previously described [29]. For histological analysis, intestinal tissues were fixed in 4% formaldehyde in phosphate-buffered saline (PBS) and embedded in paraffin. Four-micrometer-thick sections were stained with hematoxylin and eosin (HE).

Intestinal tissues of HAI-1-deficient ApcMin/+ mice and control mice were fixed in 4% paraformaldehyde in PBS overnight and then dehydrated and embedded in paraffin. For immunohistochemistry, tissue sections were processed for antigen retrieval by microwaving for 10 min at 96°C in 10 mM citrate buffer (pH 6.0), followed by treatment with 3% H2O2 in PBS for 10 min. After blocking in 5% normal goat serum (DAKO, Glostrup, Denmark) in PBS, the sections were incubated with anti-NF-κB p65 rabbit monoclonal antibody (Cell Signaling Technology, Tokyo, Japan) or anti-β-catenin rabbit polyclonal antibody (Sigma-Aldrich, St. Louis, MO) or anti-HAI–1 goat polyclonal antibody (R&D Systems, Minneapolis, MN) for 16 h at 4°C and then incubated with Envision™ labeled polymer reagents (DAKO) for 30 min at room temperature. The reactions were revealed by nickel, cobalt-3, 3′-diaminobenzidine (Pierce, Rockford, IL) and counterstained with Mayer’s hematoxylin. To quantify the nuclear translocation of NF-κB or β-catenin, ten randomly selected areas were photographed at 200× magnification in both normal (non-tumor) intestinal mucosal tissue and tumor tissue from each mouse. Then, two independent investigators counted the nuclear RelA or β-catenin-positive cells and the mean number per field were calculated.

Statistical analysis was performed using SPSS15.0 software (SPSS Japan Inc., Tokyo, Japan). Comparison between two unpaired groups was made with the Mann-Whitney U test. Significance was set at p < 0.05.

We thank Ms. Yumiko Nomura and Yukari Torisu for their excellent technical assistance. This work was supported by Grant-in-Aid for Scientific Research no.15K08311 (M. Kawaguchi) and no.24390099 (H. Kataoka) from the Ministry of Education, Science, Sports and Culture, Japan.