Results from publications on inflammatory markers of C-reactive protein (CRP), interleukin-6 (IL-6) and tumor necrosis factor-α (TNF-α) and risk of colorectal adenomas are not consistent. A meta-analysis was conducted to explore the above-mentioned associations. Relevant studies were identified by a search of Embase, Medline and PubMed through February 2016. A random effect model was adopted to combine study-specific odds ratio (OR) and 95% confidence interval (95% CI). Between-study heterogeneity and publications bias were assessed. Dose–response relationships were assessed by restricted cubic splines. Nineteen observational studies were included. For highest vs. lowest levels, results from this meta-analysis did not support an association between circulating levels of CRP [OR (95% CI): 1.15 (0.94-1.40)], IL-6 [1.17 (0.94-1.46)] and TNF-α [0.99 (0.75-1.31)] and risk of colorectal adenomas, respectively. The findings were supported by sensitivity analysis and subgroup analysis. In dose-response analysis, the risk of colorectal adenomas increased by 2% [1.02 (0.97-1.08)] for each 1 mg/L increment in circulation CRP levels, 9% [1.09 (0.91-1.31)] for each 1 ng/L increment in circulation IL-6 levels, and 6% [1.06 (0.93-1.21)] for each 1 pg/mL increment in circulation TNF-α levels. Moderate between-study heterogeneity was found. No evidence of publication bias was found. Circulation levels of CRP, IL-6 and TNF-α might be not useful biomarkers for identifying colorectal adenomas, respectively.

Colorectal cancer is the third most commonly diagnosed cancer in males and the second in females worldwide [1]. In China, colorectal cancer is the fifth most common cancer in males and the fourth in females, and the incidence rate has been increasing since 2000 [2]. In addition to maintaining a healthy body weight, being physically active, minimizing consumption of red and processed meat and alcohol and avoidance of smoking, colonoscopic removal of adenomas could prevent incidence of colorectal cancer and also prevent death from colorectal cancer [1, 3]. Therefore, explore possible biomarkers to identify individuals who would benefit most from screening such as colonoscopy is needed. Adipose tissue, particularly visceral adipose tissue, is recognized as a key regulator of systemic inflammation [4] and can produce a variety of proteins, hormones and cytokines that are collectively defined as adipokines including interleukin-6 (IL-6) and tumor necrosis factor-α (TNF-α) [5-6], and the risk of colorectal adenomas increased by 13% for each 25 cm2 increase in visceral adipose tissue area [7]. C-reactive protein (CRP), one of the acute-phase proteins in inflammation, is produced in response to increased circulating IL-6 and TNF-α, etc. [5] Although results from experimental studies indicated that CRP, IL-6 and TNF-α may be involved in the development of colorectal neoplasia [5-6], published data on circulating CRP, IL-6 and TNF-α and the risk of colorectal adenomas are not conclusive [8-37], respectively. Considering no meta-analysis is available to systematically explore the above-mentioned associations, we conducted a meta-analysis of observational studies following the PRISMA statement (Appendix 1) to assess the association between circulating levels of CRP, IL-6 and TNF-α and the risk of colorectal adenomas.

The flow chart for study inclusion is shown in Appendix 2. A total of 113 articles were reviewed in full text after reviewing titles and/or abstracts. Another 94 articles were further excluded for other reasons (Appendix 2). Finally, a total of 19 studies were included for quantitatively analysis. 11 articles (6,300 cases and 8,622 controls) were included on CRP and risk of colorectal adenomas, and there were 8 articles for IL-6 (2,062 cases and 3,651 controls), and 8 articles for TNF-α (1,796 cases and 2,980 controls). All included studies were case-control or nested case-control studies, and most of studies were conducted in USA and Asia (detailed information are shown in Appendix 3). Colorectal adenoma cases and control subjects were selected by sigmoidoscopy or colonoscopy. The included studies met the quality score of 4–8 stars. 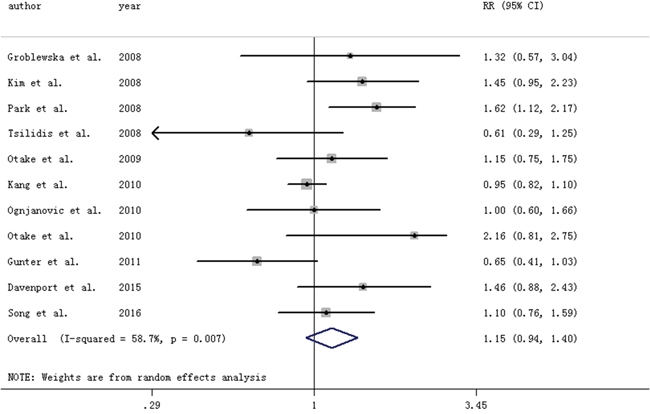 Figure 1: Forest plot for circulating levels of C-reactive protein and risk of colorectal adenomas. The size of gray box is positively proportional to the weight assigned to each study, and horizontal lines represent the 95%confidence intervals.

Table 1: Pooled results on CRP, IL-6 and TNF-α with risk of colorectal adenomas 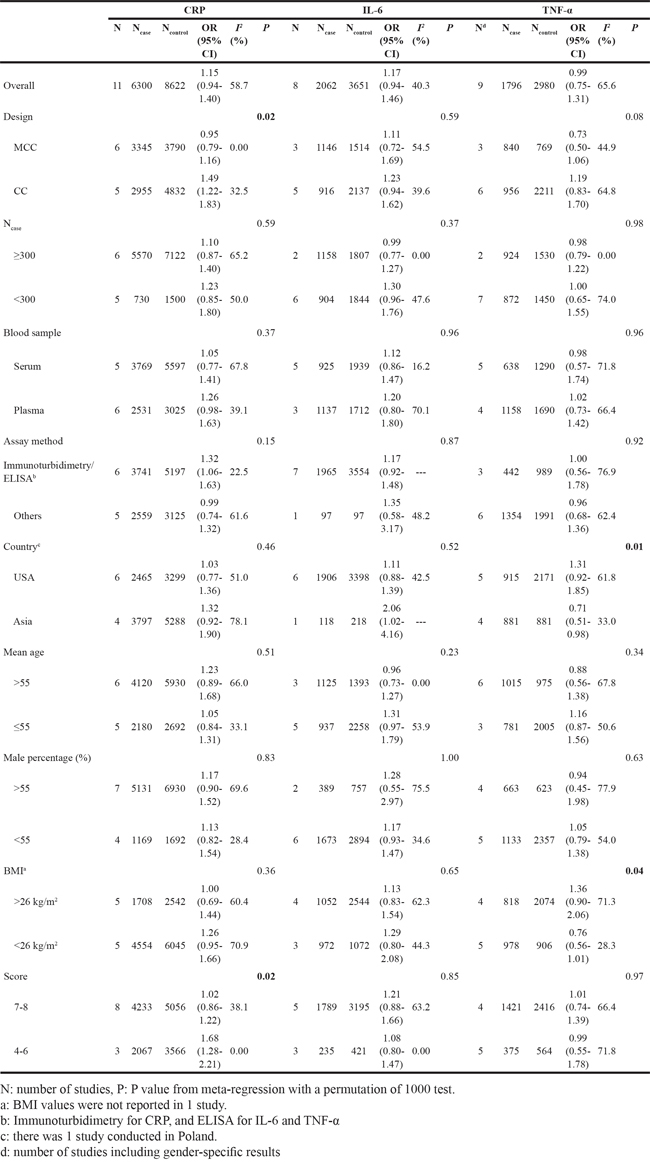 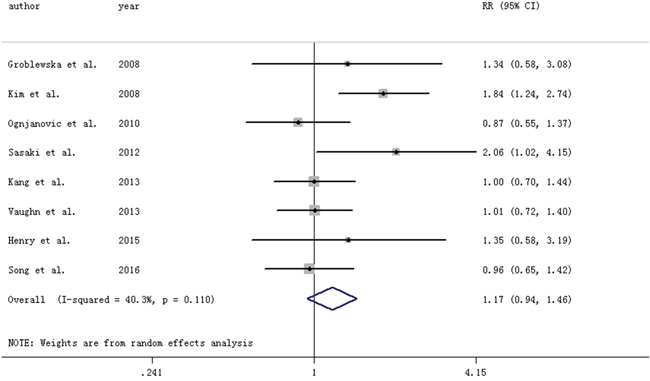 Figure 2: Forest plot for circulating levels of interleukin-6 and risk of colorectal adenomas. The size of gray box is positively proportional to the weight assigned to each study, and horizontal lines represent the 95%confidence intervals.

Highest vs. lowest category of circulating TNF-α levels conferred an OR (95% CI) of 0.99 (0.75-1.31). Moderate between-study heterogeneity was found (I2=65.6%) (Figure 3). Country where the study was conducted (P=0.01) and BMI (P=0.04) may contribute to the heterogeneity, and an inverse association was found for studies conducted in Asia. 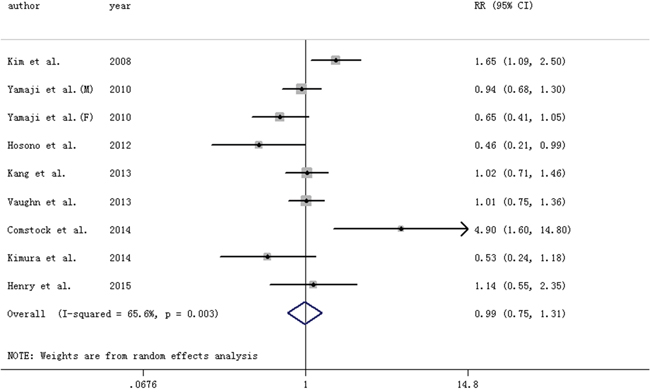 Figure 3: Forest plot for circulating levels of tumor necrosis factor-α and risk of colorectal adenomas. The size of gray box is positively proportional to the weight assigned to each study, and horizontal lines represent the 95%confidence intervals. M: male, F: female.

Results from this meta-analysis suggested that circulating levels of CRP, IL-6 and TNF-α were not associated with the risk of colorectal adenomas. The findings were consistent in sensitivity analysis and dose-response analysis. Moderate between-study heterogeneity was found. No evidence of publication bias was found.

Other limitations should also be of concern. First, serum levels were only measured once, thus the results may not precisely reflect an individual’s true or long-term levels. However, the previous study showed that CRP levels were relatively stable over a 5-year period [17]. Although adipokine tissue concentrations may be more relevant to adenoma risk, circulating measurements are more useful in clinical settings. Second, serum levels of cytokines were measured after the diagnosis of adenoma, thus the possibility of reverse causality should be considered. However, colorectal adenomas unlikely affect the amount of adipose tissue that is the major source of adipokines. Third, the confounding of smoking, body mass index and nonsteroidal anti-inflammatory drugs, which are related to both colorectal adenomas and adipokines, was not assessment because of the limited data available. Finally, only part of the studies was included in dose-response analysis, and publication bias should also be interpreted cautiously because of the relatively small number of studies.

In summary, circulating levels of CRP, IL-6 and TNF-α may be not useful biomarkers for identifying colorectal adenomas. Further prospective cohort studies are warranted to confirm these findings.

We performed a literature search from inception to February 2016 using the databases of PubMed, Embase and Medline. Details of the search strategy are shown in Appendix 2. Moreover, we also reviewed the reference lists from retrieved articles to search for further relevant studies. There is no protocol for this meta-analysis.

Two investigators (ZXQ and LSL) independently reviewed all identified studies, and studies were included if they met the following criteria: (i) an observational study published as an original study; (ii) the exposure of interest was circulating levels of CRP, IL-6 or TNF-α; (iii) the outcome of interest was colorectal adenomas (studies focusing on recurrence of colorectal adenomas were excluded) and (iv) relative risk or odds ratio (OR) with 95% confidence interval (CI) were provided (we presented all results with OR), or mean and standard deviation were available from which an OR could be calculated (http://www.campbellcollaboration.org/escalc/html/EffectSizeCalculator-SMD-main.php, accessed 4/212016). If data were duplicated in more than one study, we included the study with the most recent one; otherwise, the one with the most number of cases was included.

We extracted all data using a standardized data collection form (ZXQ and LSL). Information was recorded as follows: the first author’s last name, publication year, number of cases and participants, measurement of exposure, country where the study was performed, variables adjusted for in the analysis, OR estimates with corresponding 95% CI of colorectal adenomas. For dose–response analysis, the number of cases and participants (person-years) and OR (95% CI) for each category of CRP, IL-6 and TNF-α were also extracted. We extracted the ORs that reflected the greatest degree of control for potential confounders.

Pooled measure was calculated as the inverse variance weighted mean of the logarithm of OR with 95% CI to assess the strength of association. OR (95% CI) was calculated with the mean and standard deviation if it was not provided. A random-effect model was used as the pooling method, which considers both within-study and between-study variation. The I2 was used to assess heterogeneity, and I2 values of 25, 50 and 75% represent low, moderate and high heterogeneity, respectively [43]. Publication bias was evaluated with Egger regression test. Meta-regression and subgroup analysis were conducted to explore potential sources of heterogeneity and perform comparison between groups, and the p values from meta-regression were calculated with a permutation test of 1000 to control the spurious findings [44]. When moderate or higher heterogeneity was found and the heterogeneity cannot be explained by meta-regression, sensitivity of between-study heterogeneity was conducted to assess the robustness of conclusions [45]. We also performed a sensitivity analysis in which one study at a time was removed and the rest were analyzed to evaluate whether the results could have been affected markedly by a single study. Study quality was assessed using the 9-star Newcastle-Ottawa Scale (http://www.ohri.ca/programs/clinical_epidemiology/oxford.asp, accessed 4/21/2016).

For dose–response analysis, a two-stage random-effects dose–response meta-analysis [46] was performed to compute the trend from the correlated log OR estimates taking into account the between-study heterogeneity. The median or mean level of circulating CRP, IL-6 and TNF-α for each category was assigned to the corresponding OR for every study. If the upper boundary of the highest category was not provided, we assumed that the boundary had the same amplitude as the adjacent category. In the first stage, a restricted cubic spline model with three knots at the 25th, 50th and 75th percentiles of the circulating levels was estimated using generalized least square regression taking into account the correlation within each set of published ORs. Then the study-specific estimates were combined using the restricted maximum likelihood method in a multivariate random-effects meta-analysis. A P value for nonlinearity was calculated by testing the null hypothesis that the coefficient of the second spline is equal to 0. All statistical analyses were performed with STATA version 12.0 (Stata Corporation, College Station, TX). All reported probabilities (P values) were two-sided with p<0.05 considered statistically significant.