Gastric cancer(GC), one of the most frequently encountered malignant tumors, has become the third main reasons of tumor-associated death in our word, whose 5-year survival rate is low, especially for advanced GC [1, 2]. In most of non developed world, the incidence of GC is constantly increasing, as well as mortality [3, 4]. For most GCs are diagnosed to be advanced stages, early detection seems particularly important [5]. While, the determination of the relationship between CCND1 G870A polymorphism and the occurrence of GC provides us an effective way to reach the goal.

As a kind of important proteins that regulate cell cycle, CCND1 is of important effect in the regulation of cell transformation from G1 phase to S phase [6, 7]. In exon 4, CCND1 gene has a G > A polymorphism (G870A), which makes mRNA to produce an alternative splice site, change the protein structure of the carboxy terminal domain, resulting the disorder in cell cycle regulation Checkpoint (G1/S), reduced the capacity of DNA repair [8, 9]. Over expression of related proteins will accelerate the G1 phase, and promote the proliferation of cells, which may lead to cancer occurrence [10, 11].

Previous functional studies have reported the relationship between cyclin D1 G870A polymorphism and the occurrence of GC, However, the conclusions are still inconclusive [12-20]. To clarify this, Chen et al [21] made a comprehensive analysis of the associations between cyclin D1 G870A and digestive tract cancers. However, number of their studies included in their meta-analysis about GC is just four, and GC is just a small part of their study. In their subgroup studies, the sample size is extremely small. Therefore, we decided to carry out a meta-analysis on the whole included case-control researches to make a more accurate assessment of the relationship. Furthermore, we conducted several subgroup analyses stratified by ethnicity, source of controls, genotyping method, tumor type, Sex and H. pylori infection.

Detailed retrieval procedures are summarized in Figure 1. A total of 148 references were preliminarily identified at first based on our selection strategy. There were 28, 51, 68, 1 records in database of PubMed, EMBASE, Web of science and the Cochrane Library, respectively. 95 records left after excluding duplicate articles. We reviewed titles and abstracts of all identified studies and excluded 47 papers that were clearly irrelevant, 28 studies that not focused on CCND1 G870A polymorphism and the occurrence of GC, 6 records that were review papers. Next, the whole of the rest of the papers were examined according to the inclusion and exclusion criteria. 5 of full-text articles excluded for 2 insufficient data and 3 data from the same institution. Finally, 9 studies about cyclin D1 G870A polymorphism and GC risk were eventually included in our study, including 1813 cases and 2173 controls. Characteristics of eligible analyses are shown in Table 1. The 9 case–control papers were published between 2003 and 2014, among them, 2 studies were performed in Caucasians and 7 in Asians. Four studies were hospital-based, four were population-based and one not reported. 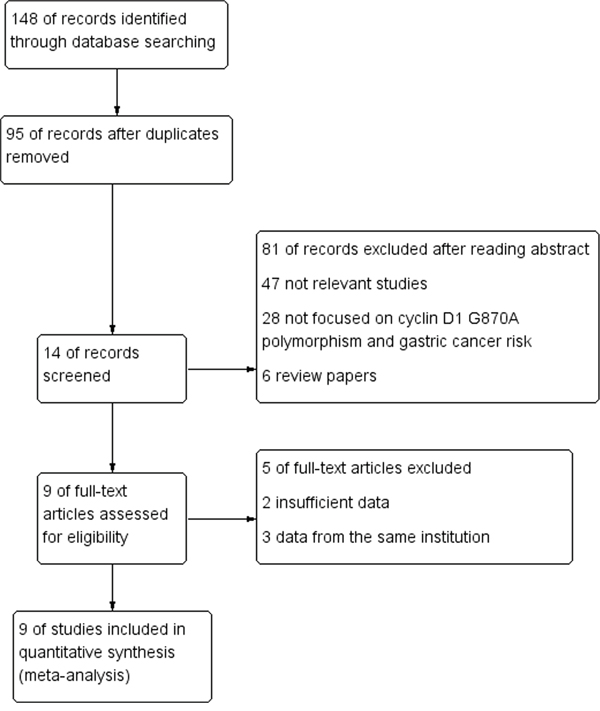 Figure 1: Flow chart of studies selection in this meta-analysis.

Notes: The squares and horizontal lines correspond to the study specific OR and 95% CI. The area of the squares reflects the weight (inverse of the variance). The diamond represents the summary OR and 95% CI.

Figure 3: Forest plots of the cyclin D1 (CCND1) G870A polymorphism and gastric cancer risk in the population based (PB) subgroup (AA vs. GG).

As shown in Table 1, all the studies conformed to the balance of HWE in controls except Kuo’s (P<0.05), however, after performing the sensitivity analyses, When removing any of the articles, the overall outcomes were no statistically significant change, suggesting that this meta-analysis has good stability and reliability. 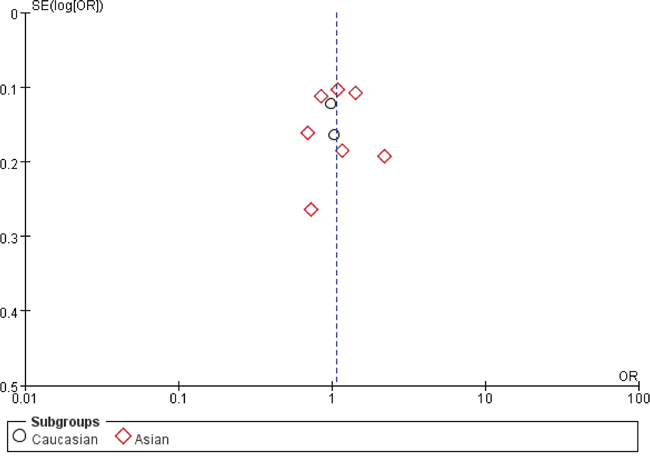 Figure 5: Funnel plot assessing evidence of publication bias from 9 studies (A vs. G).

CCND1 alterations was reported to be frequently seen in GC and associated with its poor differentiation [22, 23]. The CCND1 polymorphism is a much concerned Single Nucleotide Polymorphism (SNP), for the G870A allele creates a variant splice transcript popular as “transcript b” by regulating mRNA [24-27]. Transcript b is constitutively nuclear in localization and may be more oncogene [28-30]. Previous functional studies have reported the relationship between cyclin D1 G870A polymorphism and the occurrence of GC, However, the conclusions are still inconclusive [21, 31]. Therefore, we carried out the meta-analysis on the whole included case-control researches to make a more accurate assessment of the relationship.

The subgroup study stratified by ethnicity showed an increased GC risk in Caucasian based on heterozygote comparison. while, there was not any genetic models attained statistical correlation in Asians (Table 3). We found an increased GC risk in population based (PB) stratified analyses by Source of controls (Figure 3). However, no statistically significant association in hospital-based (HB) (Table 3). When stratifying by the type, Sex and H. pylori infection in dominant model, Interestingly, we found the opposite result in Male (Figure 4). While, not any relationships between CCND1 G870A polymorphism and GC risk in any other subgroups (Table 4).

Our meta-analysis has some limitations in the following aspects. First, Our study is a summary of the data. We did not verify it from the level of basic experiments. Second, We just included the published studies in our study. There may still be some published studies in line with the conditions. Third, the Selected papers were mostly from Asian population. Only two papers are about Caucasian population. Finally, just dominant model was used when stratifying by the type, Sex and H. pylori infection for the limitation of data. Data from a large sample of multiple centers based on Caucasian or African is still needed to confirm the relationship between cyclin D1 G870A polymorphism and GC risk.

We searched PubMed, EMBASE, Web of science, the Cochrane Library for relevant studies published before June 12, 2015. The following keywords were used: CCND1/cyclin D1, variant/genotype/polymorphism/SNP, Gastric/stomach/cardia, cancer/carcinom*/neoplasm*/tumor and the combined phrases for all genetic studies on the association between the cyclin D1 G870A polymorphism and GC risk. The reference lists of all articles were also manually screened for potential studies. Abstracts and citations were screened independently by two authors, all the agreed articles need a second screen for full-text reports. The searching was done without restriction on language.

Inclusion criteria: A study was included in this meta-analysis if it meet the following criteria: i) independent case-control studies for humans; ii) the study evaluated the association between cyclin D1 polymorphism and gastric cancer risk; iii) has available genotype frequencies in cancer cases and control subjects for risk estimate. We excluded comments, editorials, systematic reviews or studies lacking sufficient data. If the publications were duplicated or shared in more than one study, the most recent publications were included. All identified studies were screened by two investigators independently. What’s more, there were no limitation for publication language.

We used endnote bibliographic software to construct an electronic library of citations identified in the literature search. All the PubMed, EMBASE, Web of science and the Cochrane Library searches were performed using Endnote; duplicates were found automatically by endnote and deleted manually. All data extraction were checked and calculated twice according to the inclusion criteria listed above by two independent investigators. Data extracted from the included studies were as follows: First author, year of publication, country, ethnicity, Study design, Source of controls, Genotyping method and evidence of HWE in controls. A third reviewer would participate if some disagreements were emerged, and a final decision was made by the majority of the votes.

All statistical analyses were performed using STATA version 11.0 software (StataCorp LP, College Station, TX) and Review Manage version 5.2.0 (The Cochrane Collaboration, 2012). Hardy-Weinberg equilibrium (HWE) was assessed by χ2 test in the control group of each study [32]. The strength of associations between the cyclin D1 polymorphism and GC risk were measured by odds ratio (ORs) with 95% confidence interval (CIs). Z test was used the to assess the significance of the ORs, I2 and Q statistics was used to determine the statistical heterogeneity among studies. A random-effect model was used if P value of heterogeneity tests was no more than 0.1 (P ≤ 0.1), otherwise, a fixed-effect model was selected [32, 33]. Sensitivity analyses were performed to assess the stability of the results. We used Begg’s funnel plot and Egger’s test to evaluate the publication bias [34, 35]. The strength of the association was estimated in the allele model (A vs. G), the dominant model (AA + GA vs. GG), the recessive model (AA vs. GA + GG), the homozygous genetic model (AA vs. GG), and the heterozygous genetic model (GA vs. GG), respectively. P < 0.05 was considered statistically significant. We performed subgroup according to Ethnicity, Source of controls, Genotyping method, type of cancer, gender and H. pylori infection.

1. Nagini S. Carcinoma of the stomach: A review of epidemiology, pathogenesis, molecular genetics and chemoprevention. World journal of gastrointestinal oncology. 2012; 4:156-169.

4. Morais S, Ferro A, Bastos A, Castro C, Lunet N, Peleteiro B. Trends in gastric cancer mortality and in the prevalence of Helicobacter pylori infection in Portugal. European journal of cancer prevention. 2015.

16. Kiel S, Geddert H, Gabbert HE, Sarbia M. Genetic polymorphism of p16INK4A and cyclin D1: relationship to disposition for the development of esophageal or gastric adenocarcinomas? Pathology Research and Practice. 2004; 200:314-315.

32. Mantel N, Haenszel W. Statistical aspects of the analysis of data from retrospective studies of disease. Journal of the National Cancer Institute. 1959; 22:719-748.