Lung cancer was the most common cause of cancer-related death in men and women, and is responsible for 1.8 million deaths in 2012 [1]. Although, various therapeutic methods have been developed, the five-year survival rate is still relatively low [2, 3]. Synergetic effects of genetic alterations, tobacco smoke and environmental factors are considered to drive abnormal gene expression, which contributes to the initiation, development and progression of lung cancer [4–6]. But the molecular mechanisms of lung tumorigenesis have not yet been clearly elucidated.

PHRF1 (PHD and RING finger domain-containing protein 1), also known as RNF221, KIAA1542 or CTD binding SR like protein rA9, which shares significant similarity with the rA9 protein, contains a Ser/Arg-rich domain and binds to the C-terminal domain of the RNA polymerase II large subunit [7]. Previous studies reported two somatic mutations in the PHRF1 gene in breast cancer: one of them is a missense mutation, whereas the other is located within an intron [8, 9]. Recent studies have revealed that PHRF1 is a tumor suppressor in the initiation and development of breast cancer and acute promyelocytic leukemia [10, 11]. PHRF1 could promote the genome integrity by modulating non-homologous end-joining upon DNA damage insults [12]. However, the expression pattern and functional mechanisms of PHRF1 in lung cancer have not yet been elucidated. In this study, we measured the level of PHRF1 expression in human lung cancer tissues, lung cancer cell lines, malignant human bronchial epithelial (16HBE) cells induced by benzo(a)pyrene (BaP) and mice lung tissues treated by BaP. We also investigated the effects of overexpression of PHRF1 on H1299 cell proliferation and tumor formation in vitro and in vivo, and cell cycle distribution.

The level of PHRF1 in human lung cancer tissues 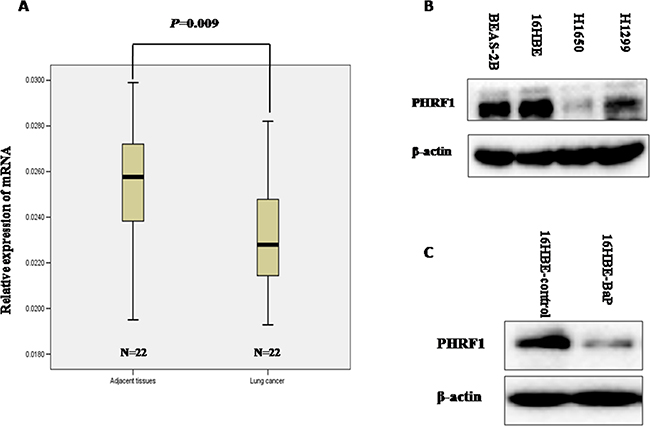 The expression of PHRF1 in mice lung tissues treated by BaP

Above, we observed the markedly reduced expression of PHRF1 in lung cancer from population study and in vitro experimental studies as compared to those in its corresponding controls. To further investigate the pattern of PHRF1 expression in in vivo experiment, female Kunming mice were treated with BaP to induce lung tumorigenesis. Western blot analysis indicated that the significantly decreased expression of PHRF1 protein was observed in mice lung tissues treated with BaP than that in control group (Figure 2A). The immunohistochemistry assay showed that the staining of PHRF1 was weak in BaP-treated group, but strong in control group (Figure 2B). 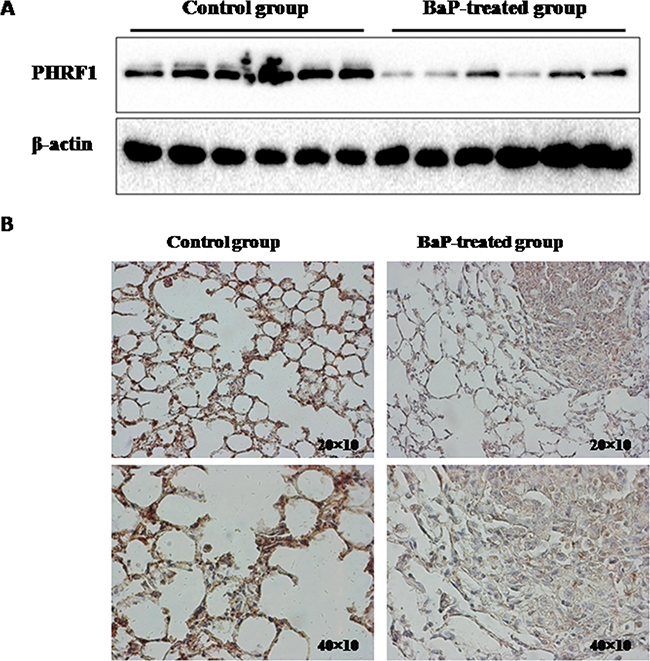 The effects of overexpression of PHRF1 on H1299 cell proliferation

To observe the effects of overexpression of PHRF1 on the cell proliferation, H1299 cells were infected with PHRF1 lentiviruses. Figure 3A showed that an H1299 cell line stably overexpressing PHRF1 was successfully established. The cell number was counted at different time points. As shown in Figure 3B, the growth of H1299-PHRF1 cells was significantly slower than that of H1299-pvoid cells from 72h (P < 0.05). 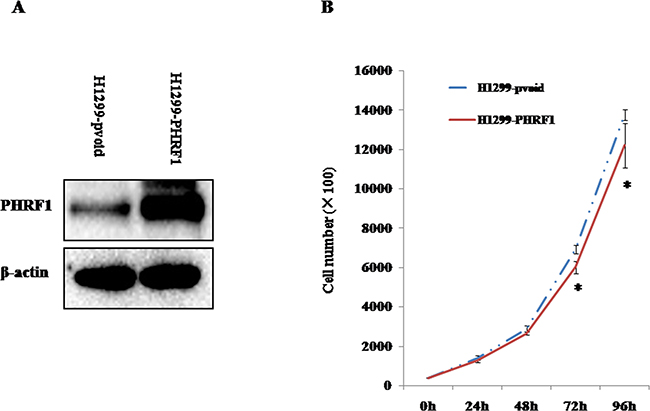 The effects of overexpression of PHRF1 on colony formation 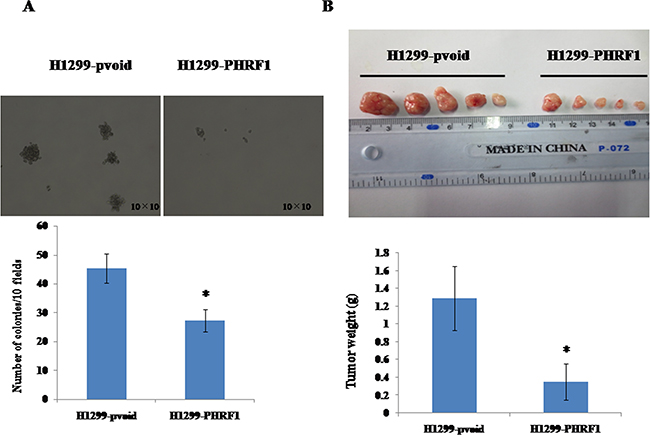 Above, we observed overexpression of PHRF1 inhibited colony formation of H1299 cells in vitro. To assess the role of overexpression of PHRF1 in tumor growth ability in vivo, we established BALB/c nude mouse xenograft model with H1299-PHRF1 cells and H1299-pvoid cells by subcutaneous injection. Figure 4B showed that there was a significant decrease in the mean of tumor weight in the group of H1299-PHRF1 cells (0.35±0.21 g) as compared to that in the group of H1299-pvoid cells (1.29±0.36 g) (P < 0.05), which suggests that overexpression of PHRF1 significantly inhibited the tumor formation and tumor growth of H1299 cells in vivo. 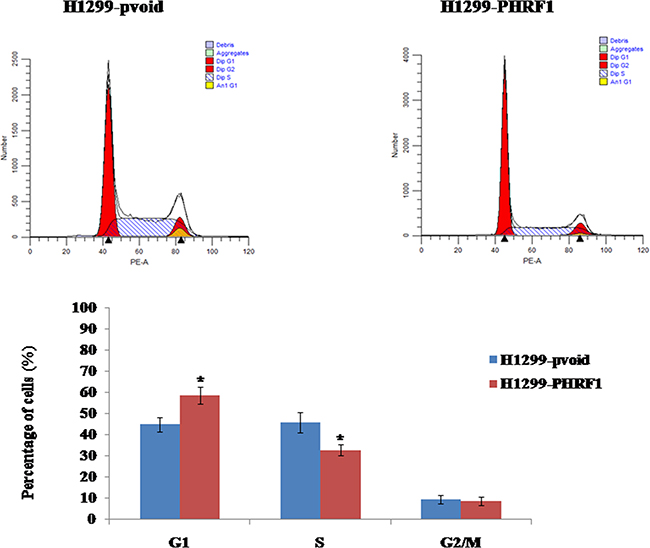 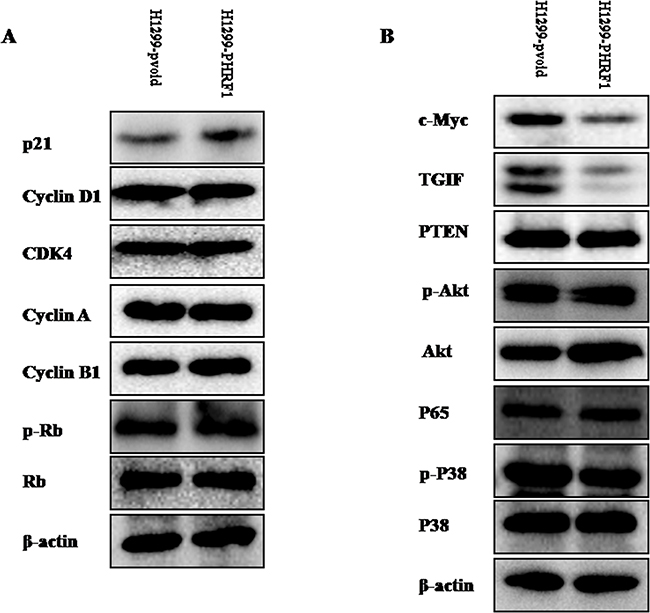 To our knowledge, cell cycle arrest is one of the major causes of cell growth inhibition. To observe the effects of overexpression of PHRF1 on the distribution of cell cycle of H1299 cells, flow cytometry analysis was performed. Our results showed that the cell population of G1 phase was dramatically higher in H1299-PHRF1 cells than that in H1299-pvoid cells, which suggests that overexpression of PHRF1 induced G1 phase cell cycle arrest. Accompanied with G1 phase cell cycle arrest, we further observed the increased expression of p21 protein in H1299-PHRF1 cells compared with H1299-pvoid cells. Studies have shown that p21 is one of the major cyclin-dependent kinase inhibitors (CDKIs). It negatively regulates the cell cycle progression and arrests proliferation by binding to active cyclin-CDK (cyclin-dependent kinase) complex and inhibiting their kinase activities [18–21], thereby decreasing the level of hyper-phasphorylated Rb (p-Rb) [22]. But in this present study, we did not observe obvious change of p-Rb between H1299-PHRF1 cells and H1299-pvoid cells.

The c-Myc oncoprotein is a pleiotropic transcription factor that has been shown to regulate a great number of genes and to be involved in many physiological functions, such as proliferation, cell cycle, apoptosis, differentiation, angiogenesis, metabolism and microRNA regulation [25, 26]. The c-Myc oncogene is frequently overexpressed in lung cancer [27]. In this study, we found that overexpression of PHRF1 reduced the expression of c-Myc protein in H1299 cells. However, the mechanism of PHRF1 regulating the expression of c-Myc protein in non-small cell lung cancer cell was not addressed in this study, which should be focused on in the future study.

Although the findings are very encouraging, there are several limitations in this current study. Firstly, PHRF1-overexpressed cell model was applied to address the potential role of PHRF1 in lung tumorigenesis in this study. PHRF1-silenced cell model should be performed to verify our findings in the future study. Secondly, only 22 human lung cancer tissue samples and its matched paracancerous tissue samples were used to measure the expression of PHRF1 in the mRNA level in this present study. Studies with larger sample sizes should be carried out to verify our findings. Thirdly, there are several types of lung cancers that depend on different genetic and epigenetic alterations. Thus, future studies should pay more attention to the potential role of PHRF1 in specific type of lung cancers. In addition, only one cell line was applied to address the effects of PHRF1 overexpression on the proliferation and tumorigenicity of non-small cell lung cancer cell. Other stable PHRF1-overexpressed non-small cell lung cancer cell lines should be constructed to verify the findings in the future studies.

The packaging vector pCMVdeltaR8.91, the VSV-G envelope glycoprotein vector pMD.G, and the full-length of PHRF1 in the pLenti6/V5 vector were gifted from Prof. Chang (Institute of Biochemical Sciences, National Taiwan University) and were co-transfected into HEK293T cells. After 48h incubation, the viral particles were collected to infect H1299 cells in the presence of polybrene (8 μg/ml) for viral infection [12]. Stable clones were selected with 8 μg/ml of blasticidin (Sigma, USA) for 21 days and named as H1299-PHRF1. Cells infected with empty vector viral particles were named as H1299-pvoid.

Human lung cancer tissue samples and its matched paracancerous tissue samples were mentioned in our previous study [13]. Written informed consent for participation in this study was obtained from all patients prior to the surgical operations. This study was approved by the Ethics Committee of the First Affiliated Hospital of Zhengzhou University and the associated methods were carried out in accordance with the approved guidelines. BaP-treated mice lung tissues and control mice lung tissues were maintained in our laboratory [13].

Soft agar assay was applied to evaluate the abilities of H1299-PHRF1 cells and H1299-pvoid cells to grow as anchorage-independent colonies. 2 ml of 0.6% low melting point agarose in RPMI-1640 medium containing 10% FBS were poured into 6-well plate and allowed to solidify at room temperature. After solidification, 500 cells were suspended in 1 ml of 0.35% low melting point agarose in the same medium and then plated on top of the base layer (3 wells per group). The cells were cultured for 14 days. Colonies with at least 50 cells were counted using a microscope at 100× magnification and the number of colonies in soft agar (10 fields per well) was quantified [13].

All experimental procedures involving animals were performed in accordance with the guideline for the Care and Use of Laboratory Animals. This work was approved by the Ethics Committee of Henan Center for Disease Control and Prevention. Four-week old female BALB/c nude mice were purchased from Vital River Laboratory Animal Technology Co. Ltd (Beijing, China). H1299-PHRF1 cells and H1299-pvoid cells were harvested, washed twice with PBS, and suspended in PBS. Five mice per group received 5 × 106 cells in 200 μl of PBS injected subcutaneously into the back neck of each mouse. The mice were housed in a specific pathogen-free environment and sacrificed at 21 days post-injection [13].

H1299-PHRF1 cells and H1299-pvoid cells were seeded in 60-mm plate. Cells were detached by trypsinization when growing to 70%-80% confluence, washed twice with cold PBS, fixed in 70% ethanol at -20°C overnight. The fixed cells were washed twice with cold PBS, suspended in 0.5 ml of PBS containing 100 μg/ml of RNase (Invitrogen Life Technologies, USA) and 50 μg/ml of propidium iodide (PI) (Sigma, USA) and incubated at room temperature for 40 min in the dark. Cell cycle analysis was performed by flow cytometry (BD Biosciences). Duplicates were performed in all experiments and experiments were performed on two occasions.

We are grateful to Prof. M-S Chang for gifting us plasmids and Prof. Wen Chen for gifting us 16HBE cell line. This work was supported by grants from the National Natural Science Foundation of China (U1404815) and the Henan Collaborative Innovation Center of Molecular Diagnosis and Laboratory Medicine (XTCX-2015-PY7). The funders had no role in study design, data collection and analysis, decision to publish, or preparation of the manuscript.