Methods This is a prospective observational study. Patients with unresectable locally advanced gastric cancer were performed EOX regimen or XELOX regimen at the discretion of the investigators. They were assessed for response every 2 cycles by CT (computed tomography) scan. A multidisciplinary team reassessed resectability after 4 cycles. The primary endpoint was the response rate. Secondary end points included the R0 resection rate, survival and adverse events.

Some investigators have reported that initially unresectable locally advanced gastric cancer can be successfully treated with preoperative chemotherapy and followed radical resection [5-7]. However, the preoperative chemotherapy regimens were quite different in those trials. Epirubicin, cisplatin and continuous 5-fluorouracil (5-Fu) infusion (ECF) has been reported with high clinical response rate in advanced gastroesophageal adenocarcinoma and is currently the ‘gold standard’ chemotherapy regimen as preoperative chemotherapy in western countries [8]. Recently, the addition of docetaxel to cisplatin and fluorouracil in preoperative treatment were shown to improve the outcome of unresectable gastric cancer patients in Japan [9]. Although the response rates of these triplet combinations could be higher than the doublet combinations, severe toxicities like neutropenia and febrile neutropenia may limit their clinical practice. Meanwhile, it is a concerning issue whether patients could tolerate the same intensive regimen after operation.

In our experience, it has been demonstrated that doublet regimen such as XELOX regimen (capecitabine plus oxaliplatin) could produce favorable tumor response rate with relatively mild toxicity profile for advanced gastric cancer patients with para-aortic lymph node metastasis [10].Therefore, since it is unknown whether more aggressive treatment with three chemotherapeutic agents produces better clinical effects compared to doublet therapy in enabling curative resection, the objective of this study is to determine what kind of chemotherapy strategy (EOX or XELOX regimen) can make subsequent radical surgery feasible and improve overall survival in patients with locally advanced gastric cancer.

This is a prospective observational study. Patients with unresectable, histologically confirmed gastric or EGJ (Esophagogastric junction) adenocarcinoma with no distant metastases were eligible for the study from November 2008 to May 2015. All the patients received endoscopic examination, contrast CT scan for abdomen and pelvic, chest X-ray, as well as physical examination. Unresectability was judged by a local multidisciplinary team, according to one of the following criteria: radical resection was unable for technical reasons after laparotomy or laparoscopy exploration; tumor invades adjacent structures such as the pancreas, liver, diaphragm, adrenal gland or transvers colon (T4b) in CT scan; bulky lymph nodes (larger than 3 cm) along the celiac, splenic, common or proper hepatic arteries, or the superior mesenteric vein. Exclusion criteria of patients are: peritoneal metastasis confirmed by CT scan; lung metastasis, liver metastasis, pleural effusion, and/or other distant metastasis; serious uncontrolled comorbid conditions; any local intervention after initial diagnosis, such as surgical procedures, radiotherapy or TACE (trans-artery chemo-embolization); patients who could not comprehend or comply with the study. A multidisciplinary evaluation was required in this study. All patients signed an approved written informed consent. The protocol of this trial was approved by the institutional ethical board of Zhongshan Hospital, Fudan University and was registered on ClinicalTrials.gov (NCT02192983).

After every two cycles (6 weeks), an abdominal and pelvic CT scan was performed to evaluate the tumor response. Resectability was assessed by multidisciplinary team after four cycles of treatment. Resection was intended to be done within 4-6 weeks after the last treatment cycle. Patients with unresectable tumors continued treatment and were assessed for resectability every two cycles for a maximum duration of eight cycles or until progression. After resection, patients were continued the previous regimen for four cycles. Patients with progressive disease or unacceptable toxicity were treated at the discretion of the investigators. Response to the treatment was evaluated according to response evaluation criteria in solid tumor (RECIST) 1.1 [12] and for primary lesions according to the guidelines of the Japanese classification of gastric carcinoma [13]. The adverse events were assessed according to the Common Toxicity Criteria of the National Cancer Institute (NCI -CTC) 3.0 [14].

After R0 resection, adjuvant chemotherapy with the original regimen was initiated within 42 days of surgery, and eight cycles were administered during perioperative period. Patients who could not undergo a radical operation received palliative chemotherapy until evidence of disease progression appeared, and second-line treatment was recommended for adequate patients. All enrolled patients were followed up regularly. Physical and blood examinations were conducted every three months for the first three years and every six months thereafter. An abdominal CT scan was performed every six months for the first three years, and every year thereafter. Chest CT scan and upper gastrointestinal endoscopy were conducted every year.

The primary study endpoint was the response rate, and secondary endpoints included R0 resection rate, progression-free survival (PFS), overall survival (OS) and toxicity. PFS was measured from the date of initial treatment to the first objective documentation of disease progression or relapse. OS was measured from the start of the treatment to the date of the last follow-up or death. All patients were followed up every three months.

Patient baseline characteristics and disease factors were summarized using descriptive statistics. The categorical parameters were compared using two-sided Pearson’s test or Fisher’s exact test, as appropriate. The PFS and OS were generated by the Kaplan-Meier method and were compared by means of the log-rank test. SPSS software (version 16.0; SPSS, Chicago, IL) was used for statistical analyses. A P < 0.05 was considered significant.

From November 2008 to May 2015, 275 patients were enrolled in the study. After screening, 19 patients were excluded because of refusal of treatment, resectable disease or other reasons. 3 patients missed follow-up within the first two treatment cycles. All patients were followed up with comprehensive information and the last date of follow-up was October 31, 2015. The baseline characteristics of the patients are shown in Table 1. The two groups were well balanced in respect to gender, age, site of location, anemia, histologic subtype, unresectable reason, and clinical stage. 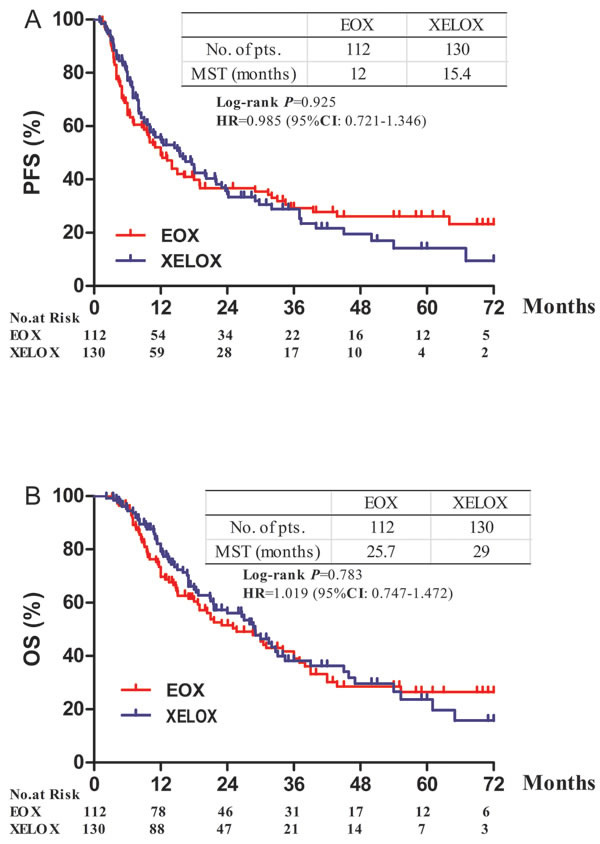 Response to the chemotherapy (Table 2)

After 4 cycles, there were 241 patients evaluable for response (one patient had acute stomach perforation after the first cycle of XELOX regimen and thus did not receive the evaluation).The result showed no difference in two groups. In group A, one patient had a complete response (CR), 36 had partial responses (PR), 56 had stable disease (SD), and 19 had progression of disease (PD). The response rate (RR) was 33.0% and disease control rate (DCR) was 83.0%. While in group B, RR and DCR were 33.8% and 88.4% respectively, which suggested no significant difference in response rates between the two groups. 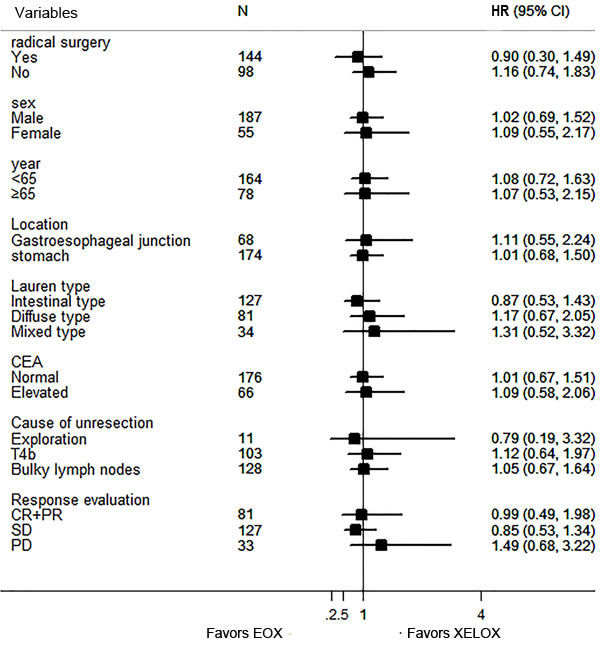 Figure 2: Forest plot of the treatment effect on overall survival in subgroup analysis 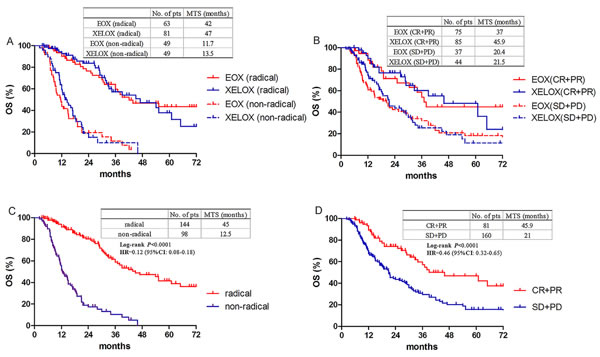 Optimal regimen as preoperative chemotherapy in the locally advanced gastric cancer is still a matter of debate. This study is the first to evaluate the feasibility and the potential benefit of preoperative chemotherapy with or without the addition of epirubicin to capecitabine and oxaliplatin in initially unresectable Chinese gastric cancer patients. We confirmed that even additional epirubicin was added, EOX regimen could not show more advantages compared to XELOX regimen in aspects of response rate, conversion rate from unresectable to resectable and survival. The result was similar with other studies in assessing difference between two-drug and three-drug regimens as preoperative or first-line chemotherapy treatment [16, 17]. Lorenzen S demonstrated [16] that neoadjuvant FLOT (infusional 5-FU, leucovorin, oxaliplatin and docetaxel) offered an acceptable chance of curative surgery compared with FLO (infusional 5-FU, leucovorin, and oxaliplatin) in elderly patients with locally advanced gastroesophageal cancer, while a French Intergroup Study [17] even showed that doublet FOLFIRI (Fluorouracil, Leucovorin, and Irinotecan) as first-line treatment for advanced gastric cancer had significantly better TTF (Time to failure) than triplet ECX (Epirubicin, Cisplatin and Capecitabine) .

In addition, it was apparently known that more aggressive therapy containing triplet combinations had more adverse effects. Our data indicated that preoperative chemotherapy related toxicity events tended to be more frequent in EOX group than XELOX group, especially in leucopenia, fatigue and vomiting. Furthermore, only 44.4% of patients who had radical surgery in group A (28/63) completed all eight cycles of treatment; 20 patients (31.7%) received XELOX regimen as postoperative chemotherapy predominantly owing to postoperative complications, while 58 of 81 patients (71.6%) who underwent radical resection in Group B completed all eight cycles of XELOX regimen. The accomplished ratio in group A was similar with MAGIC study which was 42% as reported. The tolerance of postoperative chemotherapy was more acceptable in the epirubicin free regimen. Epirubicin as well as methotrexate and mitomycin C had been used as component of chemotherapy regimen in gastric cancer since the late 1980s [18-20], however these old agents have been less applied nowadays as their low activities and high toxicities, especially in Eastern countries. Meanwhile, the dose of capecitabine in XELOX regimen is higher than EOX regimen which could partially explain the identical response between doublet and triplet regimens. As newer chemotherapy agents have become more and more available such as docetaxel, paclitaxel and irinotecan which are demonstrated promising efficacy and manageable toxicity [17, 21-23], new triplet regimens including more powerful agents should be considered.

In this study, we also confirmed that patients could have survival benefit from radical resection after response to the preoperative chemotherapy [7, 24-25]. Median OS could be prolonged from 12.5m to 45m when conversion chemotherapy and radical surgery were sequentially accomplished. There were no difference regarding the R0 resection rate compared our study with others evaluating the efficacy and feasibility of different preoperative chemotherapy regimens in patients with initially unresectable locally advanced gastric cancer [7, 24, 25], which were from 48.1% to 63%. A few of patients who got stable disease evaluated by CT scan were diagnosed as being resectable when assessed by a multidisciplinary team, which explained higher R0 resection ratio than response rate. Meanwhile, the radiological response could predict that patients who obtained CR or PR would have better survival than these achieved SD or PD (45.9m vs. 21.0m), which indicated that response to preoperative chemotherapy may predict survival before curative resection of gastric cancer.

Since it is a prospective observational study, there are some limitations that cannot be avoided, such as non-randomized, unblinded setting which might have a great chance producing selection bias. However, figures in Table 1 showed that basic characteristics were well balanced between the two groups.

In conclusion, our study suggested that unresectable locally advanced gastric cancer patients can benefit equally from XELOX and EOX regimen. As the more aggressive treatment including three chemotherapeutic drugs would produce more toxicity effect, mild doublet treatment might be a better choice. Further randomized trials focused on certain type of regimen will help us to determine which strategy is the best for these patients.

The authors appreciate very much the great effort of the staff members in the Department of Medical Oncology,Zhongshan Hospital, Fudan University for their helpful suggestions and assistance.

The authors of the manuscript declare that there are no conflicts of interest.