Experimental Design: This retrospective study was approved by our Institutional Review Board, with a waiver of informed consent. FDG PET/CT studies of 35 patients (male, 24; female, 11; median age, 53.2 years) obtained between January, 2005 and December, 2012 were analyzed before and after systemic chemotherapy. Diagnosis of SOS was based on histologic (n=13) or gadoxetic acid-enhanced MRI (n=22) findings. On PET/CT images, ROIs drawn on non-tumorous liver generated mean standardized uptake value (SUVliver). Total lesion glycolysis of liver (TLGliver) was calculated as: SUVliver × CT-derived hepatic volume. Paired t-test was applied to compare changes before and after SOS.

Conclusions: Hepatic FDG uptake on PET/CT intensified after onset of SOS and thus may be an inappropriate reference in this setting, potentially skewing chemotherapeutic responses gauged by lesion-to-liver SUV ratio.

Recent advances in chemotherapeutic regimens, surgical techniques, and imaging studies have markedly improved treatment outcomes in various types of cancer [1-4]. Regimens incorporating oxaliplatin and cisplatin have significantly improved treatment response rates, enabling surgical resection of initially unresectable liver metastases in carefully selected patients [5-9]. However, these newer agents are not without side effects and often induce hepatic sinusoidal obstruction syndrome (SOS) [10]. As their usage increases, a commensurate upsurge in SOS may well be anticipated.

Although SOS is not life-threatening to the majority of sufferers, its detection has important clinical ramifications in certain patients. Hematopoietic stem cell transplant recipients are particularly vulnerable to SOS, with reported mortality of ~80-90% [11, 12]. Furthermore, patients with hepatic SOS are more prone to bleeding and therefore are at greater risk of intra- and post-operative complications [13-15].

Radiologic findings indicative of SOS are well known, reflecting the morphology that is manifested in liver [16]. Heterogeneous hepatic parenchymal enhancement during the portal phase of CT has been described in SOS and may be diffuse, peripheral, or multifocal in distribution [17]. Reticular hepatic hypointensity on the hepatobiliary phase of gadoxetic acid-enhanced MRI is also a highly specific feature of SOS [18-20]. As such, we assumed that these SOS-related morphologic and/or functional changes would similarly appear on 18F-fluorodeoxyglucose positron emission tomography/computed tomography (FDG PET/CT) imaging.

FDG PET/CT enables non-invasive whole-body imaging of glucose metabolism and has been increasingly utilized to predict responses to systemic chemotherapy in patients with cancer. Nevertheless, only one case report of SOS-related PET/CT imaging attributes is currently found in the literature [21]. Moreover, the liver-to-lesion SUV ratio (SUVlesion/SUVliver) determinable by PET/CT is a frequent means of assessing tumor treatment response. Thus any change in SUVliver during development of SOS is of considerable importance.

The purpose of this study was to investigate hepatic FDG PET/CT findings in the context of SOS, comparing PET/CT scans performed before and after its development. 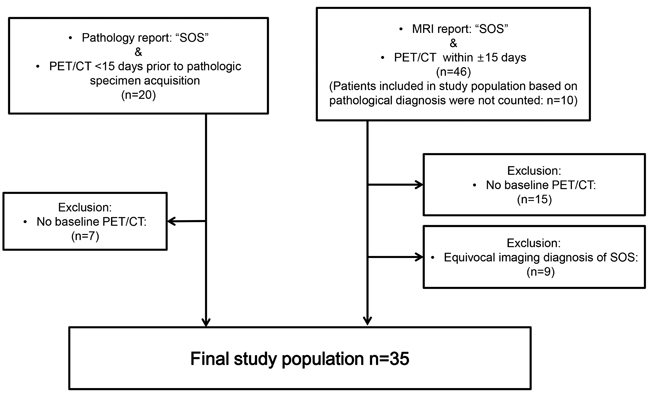 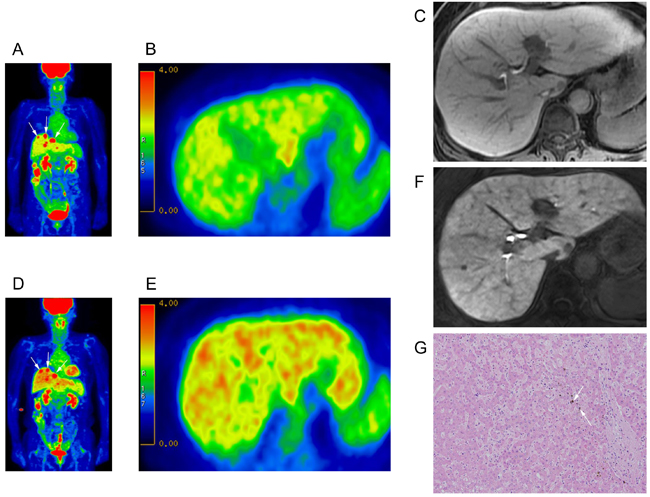 Severity of SOS and FDG PET/CT

Table 4: Comparison of PET/CT indices by severity of SOS

In this study, we have demonstrated that hepatic FDG uptake on PET/CT increases after onset of SOS. To the best of our knowledge, only one published case report has similarly delineated this relationship. Known risk factors of SOS, such as adjuvant or neo-adjuvant chemotherapy, hematopoietic stem cell transplantation, and liver transplantation [13, 22, 23], should be sought when interpreting PET/CT images. Prior oxaliplatin-based chemotherapy is a critical factor, given that the risk of subsequent SOS is considerable (18.9-79%) [24-26]. CT and/or MRI imaging conducted in parallel may provide further diagnostic support. Hallmark features of SOS include heterogeneous parenchymal enhancement on contrast-enhanced dynamic liver studies and/or reticular hypointensity during hepatobiliary phase of a gadoxetic acid-enhanced MRI [17-20]. Hepatic or splenic enlargement, readily detectable in imaging studies, is also characteristic of SOS (Table 3). A suspected shift in hepatic FDG uptake may be exposed through careful comparison of sequential PET/CT studies (current vs baseline) in terms of SUVliver.

Because PET/CT is frequently utilized to gauge chemotherapeutic response, hepatic FDG uptake is an important clinical parameter, serving in general as a standard reference. Hence, FDG uptake by various tumors may be compared within or among individuals by calculating lesion-to-liver SUV ratio (SUVlesion/SUVliver). This strategy, based on an authenticated concept that SUVliver is quite stable over time [27], is also integral to the PET Response Criteria in Solid Tumors (PERCIST) 1.0 protocol. The latter guides therapeutic response determinations, utilizing liver to normalize SUL (i.e., lean body mass SUV) .

Our findings instead indicate that hepatic FDG uptake can be affected by the development of SOS, and as a result sometimes may change rather than remain constant. In our cohort, approximately 10% increase in SUVliver was observed on PET/CT (relative to baseline) after onset of SOS (Table 3). Consequently, the lesion-to-liver SUV ratio (SUVlesion/SUVliver) will decline by default, and may have more or less influence on the interpretation of chemotherapy response assessment. Furthermore, SOS is a dynamic process, subject to aggravation, improvement, or resolution [22, 26]. Therefore, SUVliver may actually vacillate (as would lesion-to-liver SUV ratio and even SUL) in this setting, rather than simply increasing, according to phase of disease. However, we found no statistically significant difference in SUVliver determinations when stratifying patients by severity of SOS (Table 4).

On the other hand, SUVaorta remained consistent, regardless of whether or not SOS developed (Table 3, 4). According to PERSIST (1.0), if the liver is diseased and not suitable to serve as a reference, the blood pool activity in descending aorta is an acceptable alternative [28]. In view of this finding, we advise all pertinent specialists to be cognizant of SOS and its clinical presentation and urge that descending aorta (rather than liver) serve as diagnostic reference.

The mechanism for intensification of hepatic FDG uptake with onset of SOS is unclear. Focal or diffuse FDG uptake by tissues (organ or lesion) is typically attributed to heightened blood flow or glucose metabolism. Decreased washout and stasis of radiotracer are alternative explanations. Toxic injuries to endothelium have been implicated in SOS, which is histologically characterized by sinusoidal dilatation with peliosis, nodular regenerative hyperplasia, and fibrosis [29]. We speculate that microcirculatory disturbances due to endothelial cell injury and stasis of blood in peliosis may produce hepatic congestion, thereby passively increasing the blood-pool FDG tracer activity. In the sole case report to date, which formally documented a correlation between FDG uptake and SOS [21], trapping of FDG within dilated sinusoids was offered as explanation. Inflammation seemed less likely, considering its conspicuous absence from liver biopsy [21].

This investigation has several acknowledged limitations. Although histologic confirmation of SOS was not routinely achieved, we contend that gadoxetic acid-enhanced MRI is a modality with high specificity for SOS and is a reliable mode of diagnosis, based on published evidence. Our imaging protocol was also fraught with inconsistency (e.g., intervals between baseline and follow-up PET/CT), as an inherent retrospective constraint. In addition, we have assumed that accumulated FDG in congested sinusoids is the basis for intensified FDG uptake in patients with SOS. To evaluate this hypothesis, a dynamic FDG PET/CT protocol is needed, well beyond the scope of this study. Future efforts should explore this method in assessing or grading the severity of SOS. As a final note, we were unable to validate our hypothesis that a rise in SUVliver with onset of SOS may artifactually skew the lesion-to-liver SUV ratio, causing misinterpretation of treatment response. Subsequent research should address this issue.

In conclusion, we have found that SOS is associated with a rise in mean SUVliver on PET/CT, relative to baseline status. Clinical awareness of this phenomenon is paramount, given that chemotherapy predisposes to SOS. The reduced lesion-to-liver SUV ratio (SUVlesion/SUVliver) that results may create a false impression of therapeutic efficacy.

The study protocol was approved by our Institutional Review Board, with a waiver of informed consent. This was a retrospective study for which all data were kept anonymous. Utilizing the facility’s electronic clinical database, patients undergoing FDG PET/CT between January, 2005 and December, 2012 qualified as potential candidates. Inclusion criteria were as follows: 1) recipients of systemic cancer chemotherapy, 2) diagnosis of hepatic SOS, based on either histopathology of surgical specimens (n = 13) or gadoxetic acid-enhanced MRI (n = 22) findings, and 3) two FDG PET/CT studies at minimum, done at baseline (prior to chemotherapy) and within 15 days of diagnosing SOS (Figure 1). Any diagnosis of SOS arrived at solely by gadoxetic acid-enhanced MRI was reviewed by two radiologists (H.K. and S-E.B.), accruing 4 and 7 years of experience in liver imaging, respectively. A consensus was reached on whether imaging characteristics of SOS were present, namely normal appearing hepatic parenchyma on baseline dynamic contrast-enhanced CT and MRI (if available) and unequivocal diffuse and heterogeneous hepatic parenchymal signal hypointensity on hepatobiliary phase image of gadoxetic acid-enhanced MRI in the aftermath of systemic chemotherapy [18-20].

Ultimately, 35 patients were recruited for study, each diagnosed with SOS and having the requisite FDG PET/CT studies at baseline and after diagnosis of SOS. The following clinical parameters (obtained within 3 days of FDG PET/CT) were recorded to gauge severity of SOS: weight, bilirubin, aspartate transaminase, alanine transaminase, creatinine, carcinoembryonic antigen, alkaline phosphatase, and platelet count. Patients were then categorized as mild, moderate, or severe SOS, as suggested by Chao [22].

In parallel, we defined a control group of 35 individuals (24 males, 11 females; median age, 52.9 years; range, 34.4-78.9 years). These patients did not have any history of malignancy and underwent PET/CT at least twice for health examination. The interval between first and second PET/CT was 22.3 months ± 13.3 months.

Studies were displayed on a GE AW 4.0 workstation (GE Healthcare, Milwaukee, WI, USA) for review by a nuclear medicine specialist (A.C.) with 10 years of experience. Region of interest (ROI) was drawn in triplicate on non-tumorous hepatic parenchyma. SUVs were normalized to body weight. Mean SUV (SUVliver) was recorded and total lesion glycolysis of the liver (TLGliver) was calculated as SUVliver × CT-derived hepatic volume (cm3). Mean SUV of aorta (SUVaorta) was similarly obtained, drawing three 1-cm ROIs on abdominal aorta and recording the average. Liver-to-blood ratio (SUVratio) was calculated as the ratio between SUVliver divided by SUVaorta (SUVliver / SUVaorta). These five indices (hepatic volume, SUVliver, TLGliver, SUVaorta, and SUVratio,) were compared at baseline and in conjunction with SOS to evaluate relative change in liver glycolysis.

Hepatic and splenic volumes were determined by a radiologist (H.K.) with 4 years of experience in hepatic imaging. To do so, CT axial images were archived in Digital Imaging and Communications in Medicine (DICOM) format and stored on a GE AW 4.0 workstation (GE Healthcare). An ROI was drawn along the margins of liver or spleen on each slice, and total organ volumes were reached additively, combining ROIs of consecutive images. The following formula was applied to determine % change rate (%) of each parameter: (ParameterFirst PET/CT - ParameterSecond PET/CT)/ParameterFirst PET/CT.

Statistical analyses relied on standard software (SPSS v19; SPSS Inc., Chicago, IL, USA). All clinical and imaging data were assessed for normality as continuous variables, using the Kolmogorov-Smirnov test at p > 0.05 to fulfill the normality assumption. Parametric analyses were applied to normally distributed variables. Paired t-test was utilized to compare changes in clinical and imaging indices before and after development of SOS. Patients were stratified as mild SOS or moderate/severe SOS to improve analytic clarity, and Student’s t-test was engaged for evaluating differences in imaging indices by degree of SOS. Statistical significance was set at p < 0.05.

The authors have no potential conflicts of interest.

This study received no financial support.