Due to early onset of local invasion and distant metastasis, pancreatic cancer is the most lethal human malignant tumor, with a 5 year survival rate of less than 5%. As a effective chemotherapy drug for pancreatic cancer patients, gemcitabine is reported to inhibit cell proliferation as a nucleotide analog. In this study, we investigated the role of gemcitabine in immune regulation of pancreatic cancer. Our data showed that the level of soluble ULBP2 (sULBP2), a ligand of NKG2D receptor, decreased in the supernatants of pancreatic cancer cell lines when gemcitabine was added, and sULBP2 level correlated with NK92 cells cytotoxicity to pancreatic cancer cell lines. Importantly, our data showed that gemcitabine promoted PANC-1 cells and MIA PaCa-2 immune evasion by reducing ADAM10 expression, a metalloproteinase involved in sULBP2 shedding from cell membrane. Knockdown of ADAM10 clearly downregulated sULBP2 levels in the culture supernatants and cells became more susceptible to NK92 cytotoxicity. Serum samples and tumor samples were obtained from 45 patients with pancreatic ductal adenocarcinoma (PDAC). Statistical analysis showed a significant correlation between the serum level of sULBP2 with ADAM10 expression in PDAC tissues. In conclusion, our data demostrated that gemcitabine inhibits ULBP2 ectodomain shedding through the suppression of ADAM10 and enhance NK cells cytotoxicity by NKG2D-ULBP2 interaction. The results extends our understanding of gemcitabine in the treatment of pancreatic cancer from cell proliferation inhibition to immune regulation.

Pancreatic cancer has become the forth leading cause of cancer-related death worldwide, and is one of the most common malignant tumors [1, 2]. Radical surgery remains the only option to cure pancreatic cancer, but few patients are diagnosed when surgical resection is feasible [3]. That is why the prognosis is poor, with similar mortality and incidence [4]. The average survival period after prognosis is no more than six months, whereas the overall 5-year survival rate is less than 5%[5]. Therefore, it is urgent to develop novel therapeutic approaches to treat pancreatic cancer.

Gemcitabine is the only chemotherapy drug that has been demonstrated to show benefit in patients with pancreatic cancer [6]. Gemcitabine alone or in combination with other chemotherapy drug or radiation treatment may prolong survival of pancreatic cancer patients. It is reported to show an broad-spectrum anti-tumor effect for most solid tumors by destroying cell replication as a nucleotide analog [7]. However, little is reported about its regulation on cancer immunity. Gemcitabine may increase memory T cells and induce naïve T cell activation, and may enhance antitumor immunity induced by tumor vaccine [8, 9]. To expand the application of gemcitabine in treatment of pancreatic cancer, its immunological impact needs to be evaluated.

ULBP2, one of UL16-binding protein family, is a cell surface glycoprotein and functions as a stress-induced ligand for NKG2D receptor [10]. Various NKG2D ligands are shown to be upregulated by a range of primary tumors, including lung, kidney, prostate, breast and colon cancers [11-14]. Immune response induced by ULBP2-NKG2D may play an important role in the eradiation of tumors by T and/or NK cells.

Figure 2: Gemcitabine enhances NK cells cytotoxicity to PANC-1 and MIA PACA-2 cells via sULBP2. The CCK-8 assay was used to determine the cytotoxicity of NK92 cells to PANC-1 cells A. and MIA-PACA2 cells B. Cells were treated with 2 μmol/l of gemcitabine (green) or vehicle (DMSO, red) for 4 h, and recombinant sULBP2 protein was added(blue). 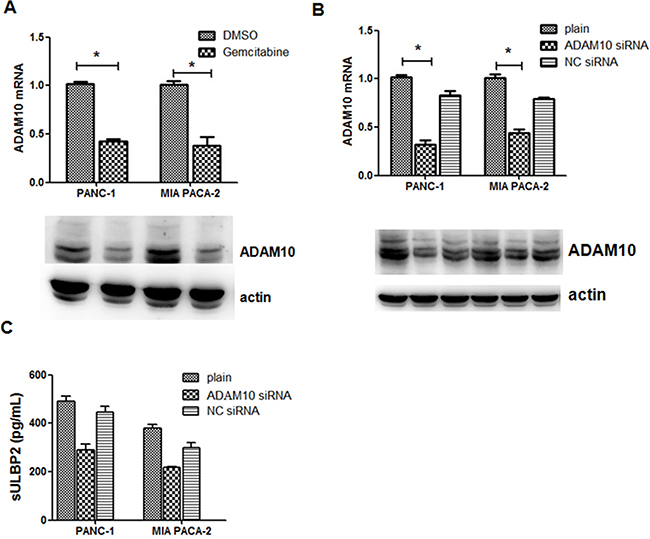 Figure 3: Gemcitabine-mediated shedding of ULBP2 is ADAM10-dependent. A. ADAM10 expression of PANC-1 and MIA PACA-2 cells was determined when 2 μmol/l gemcitabine was added into cell culture. B. Cells were transfected with ADAM10 siRNA or control siRNA for 48 h and the expression of mRNA and protein of ADAM10 was evaluated by Q-PCR and western blot. C. sULBP2 in the culture supernatant was evaluated by ELISA. *P<0.05.

sULBP2 level is correlated with poor prognosis and ADAM10 expression

We next investigated serum levels of ULBP2 by ELISA assay in 45 PDAC patients (Supplementary Table S1) and 45 healthy individuals, and the sULBP2 levels of PDAC patients were significantly higher (p<0.001) than in healthy controls (data not shown). Based on ROC analysis of PDAC patients and healthy controls, the cut-off value of 16.11 pg/ml was used to divide the serum sample into groups that were negative or positive for sULBP2 (Supplementary Figure S1). The expression of ADAM10 was determined using immunohistochemical analysis, which showed that ADAM10 staining was mainly located in the cytoplasm of tumor cells with varying staining intensity (Figure 4). The clinical and pathological characteristics of the pancreatic cancer patients are presented in Table 1. A significant difference was observed in the serum ULBP2 levels with regard to the CA199 levels (p=0.013),lymph node metastasis (p=0.009) and overall survival(p=0.045)(Figure 5). There was no significant correlation between the ADAM10 expression with age, gender, tumor size, perineural invasion, or lymph node metastasis (P>0.05, respectively). Serum ULBP2 was found to be positively correlate with ADAM10 expression. The results indirectly confirmed that the effect of gemcitabine on pancreatic cancer may be related to ADAM10 and ULBP2. 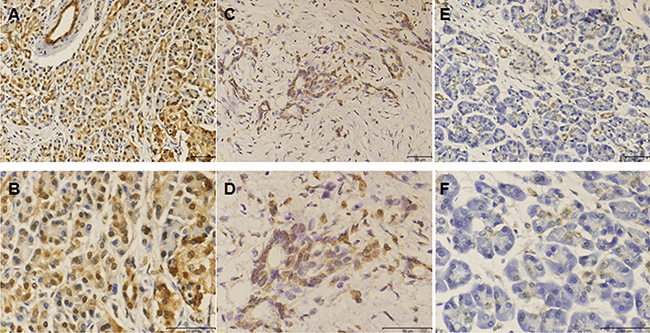 Table 1: Correlation between ULBP2 and ADAM10 expression and clinicopathological characteristics 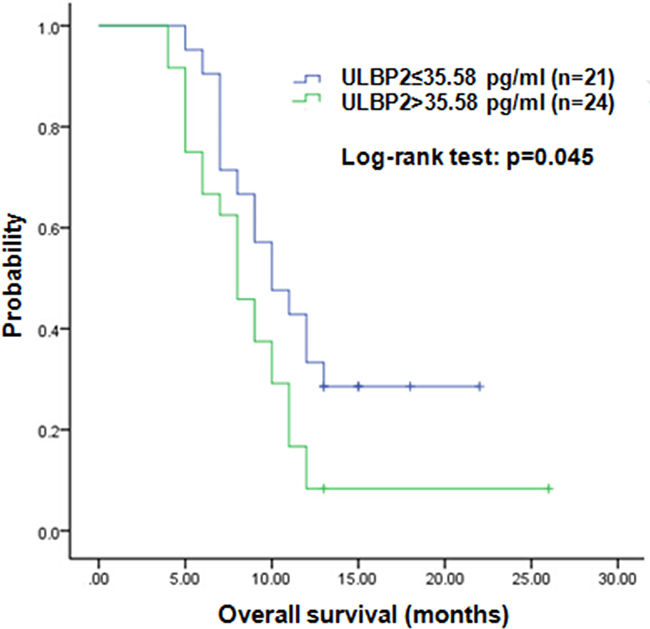 Gemcitabine is the standard chemotherapy regimen for the treatment of advanced pancreatic cancer [15]. It is a nucleoside analogue, which exerts its anti-tumor effect through a variety of mechanisms, mainly via inhibition of DNA replication and mask of DNA chain termination [16]. Therefore, it prevents the DNA synthesis and DNA repair, causes the cell to enter apoptotic pathway. However, its role in immune response have not be fully documented. Our results demonstrated that gemcitabine inhibit ULBP2 ectodomain shedding through down-regulation of ADAM10 expression in PANC-1 and MIA PACA-2 cell lines. Decrease of sULBP2 and increase of membrane-bound ULBP2 thus promote NK cells activation and may improve the antitumor effect against pancreatic cancer, which will be further confirmed by studies on tissues of pancreatic cancer patients.

In the present study, the level of serum ULBP2 was examined in 45 PDAC patients using ELISA. sULBP2 was found to be over-expressed in sera of pancreatic cancer patient compared with healthy individuals. Moreover, a significant difference was noted in the serum ULBP2 level with regard to the CA199 levels and lymph node metastasis. Serum levels of ULBP2 in pancreatic cancer patients were also found to correlate significantly with shorter overall survival and poor prognosis. ULBP2 shedding is thought to be a principal mechanism by which tumor cells escape from NKG2D-mediated immune surveillance in pancreatic cancer. Therefore, ULBP2 is hypothesized to be associated with the malignant transformation of pancreatic cancer.

ADAM10 is one of the the ADAM family of disintegrin proteinasesm, and mediates proteolytic release of ectodomains of transmembrane proteins from the cell surface, including cytokines, growth factors and cell adhesion molecules [17, 18]. The present study demonstrated that ADAM10 expression is significantly lower in gemcitabine treated pancreatic cell lines. Meanwhile, serum levels of ULBP2 was positively correlated with ADAM10 expression shown by immunohistochemistry, suggesting that gemcitabine may exerts its anti-tumor effect through inhibition of ADAM10 mediated ULBP2 shedding and corresponding enhanced NKG2D-mediated tumor elimination.

In this study, the siRNA mediated ADAM10 knockdown was found to decrease the release of sULBP2, which proved the essential role for the cleavage of sULBP2. The observations suggest that ADAM10 may serve as a potential therapeutic target for treatment of pancreatic cancer patients who are not sensitive to gemcitabine.

In conclusion, gemcitabine has been demonstrated not only to inhibit cell proliferation, but also to enhance the immune response of pancreatic cancer cells by enhancing the activity of NK cells. The present study sheds light on previously unrecognized effects of gemcitabine on tumor immune response, modulating ADAM10 and ULBP2 shedding, thus suggesting its use in chemoimmunotherapy against human pancreatic cancer.

Forty-five patients with pancreatic cancer were enrolled between January 2013 and Dec 2015. The patients were surgically treated in the Affiliated Provincial Hospital of Anhui Medical University(Hefei, China). The samples of cancer tissue were obtained during surgery, and then fixed in 10% formalin solution and embedded in paraffin. The diagnosis of the samples was confirmed histopathologically. Informed consent was obtained from each patient, and the study protocol was approved by the Research Ethics Committee of Anhui Provincial Hospital. Follow-up data were collected from all 45 patients, and the mean follow-up period in the present investigation was 9.8 (range 4–26) months. Overall survival (OS) time was calculated from the date of surgery to the date of death or last observation.

cDNA was amplified (40 cycles, 95°C for 10 sec, 60°C for 30 sec, 72 for30 sec) with an ABI StepOnePlus according to the manufacturer’s instructions. A melting curve analysis was performed to monitor PCR-product purity, and relative gene expression data were analyzed using the 2-ΔΔ Ct method.

Blood samples were procured from the pancreatic cancer patients with informed consent according to the institutional guidelines. Serum samples were centrifuged at 1500 g for 10 min and the sera were stored at -80 °C until usage. Supernatants of the cell lines were harvested at 72hr. For the determination of ULBP2 levels, commercial DuoSet ELISA kits (R&D Systems) was used, and assays were performed following the manufacturer’s instructions. The data were analyzed with Origin 8.0 software.

For the detection of membrane-bound ULBP2, cells were incubated with phycoerythrin (PE)-mouse anti ULBP2 antibody (FAB1298P, R&D systems) and then subjected to flow cytometry. Flow cytometry was performed using a FACSCalibur, and data were analyzed using WinMDI2.9 software.

The CCK-8 (cell counting kit-8) assay was used to determine the cytotoxicity of NK92 cells. PANC-1 or MIA PACA-2 cells were used as target cells. Target cells were seeded in 96-well plates, with 1*104 cells in each well, with or without gemcitabine. NK92 cells were incubated with target cells at effector/target ratios of 1:1, 1:5, 1:10 or 1:25 for 4 hr. A 20 μL aliquot of enhanced CCK8 solution (5 mg/ml in PBS) was then added to each well. Following 1 hr of incubation, absorbance was measured on an ELISA reader at a test wavelength of 450 nm. The percentage of cytolysis was calculated as [1-(Effect with Target cells)/Target]×100.

Serial tissue sections (4 μ m thick) were deparaffinized with xylene, rehydrated, and subjected to microwave antigen retrieval in citrate buffer (pH 6.0) for 20 minutes. Endogenous peroxidase activity was quenched by 3% hydrogen peroxide for 10 minutes. Afterward, the sections were incubated at 4° C overnight with monoclonal antibody (anti-ADAM10; Abcam) in a humidified chamber. After being washed, the sections were incubated for 30 minutes with horseradish peroxidase-conjugated secondary antibody (Zhongshan Golden Bridge Biotechnology). Immunoreactivity was visualized with chromogen 3,3’diaminobenzidine. Finally, all slides were counterstained with ematoxylin, dehydrated, and mounted. Tumor expression of ADAM10 was semiquantitatively evaluated using a previously reported method, and the percentage of staining cell scores (0, no staining; 1, 10%; 2, 10%–30%; 3, >30%) and the staining intensity scores (0, negative; 1, weak; 2, moderate; 3, strong) were summed. The final scores were ranged as following: total score < 3 was defined as negative (-), 3-6 as“+”, 6-9 as“++’’, and 9-12 as “+++’’. All sections were assessed by two pathologists who were blinded to clinical data.

Data were expressed as the mean ± SD. The means between groups were analyzed using the Mann-Whitney U test. All statistical analyses were performed using SPSS 16.00 statistical analysis software (SPSS Inc). Differences were considered statistically significant if p< 0.05.

We would like to thank to all of our colleagues for their constructive suggestions on the current study.

The authors have decalared that no competing interests exist.