* The first two authors contributed equally to this work

Purpose: Age is a major prognostic factor for malignant gliomas. However, few studies have investigated the management of gliomas in young adults. We determined the role of survival and treatment in young adults with advanced gliomas in a large population from the Chinese Glioma Genome Atlas (CGGA).

Results: The study included an older group (OP) of 264 patients and a younger group (YP) of 462patients. In the OP group with GBM and anaplastic glioma, patients treated with RT combined with temozolomide (TMZ) manifested significantly longer OS and PFS compared with patients assigned to RT alone (P < 0.05). In contrast, the YP group diagnosed with anaplastic glioma failed to show any survival advantage with RT plus TMZ compared with RT alone.

Malignant gliomas rank among the most prevalent primary intracranial neoplasms in adults [1], with an incidence of 80%. [2] Based on the the World Health Organization (WHO) criteria [3], grade IV glioblastoma multiforme (GBM) accounts for almost 65% of all the gliomas. The average survival is poor and age-dependent.[4] Anaplastic glioma (grade III) is a diverse group of malignancies comprising anaplastic astrocytoma (AA), anaplastic oligoastrocytoma (AOA) and anaplastic oligodendroglioma (AO). It is less frequently diagnosed and is associated with better prognosis compared with grade IV glioblastoma, despite shared molecular features and poor outcomes in the elderly.[5, 6]

Surgical resection or biopsy, and involved-field radiotherapy are indicated for the treatment of glioblastomas or anaplastic gliomas. Radiation and chemotherapy with temozolomide (TMZ) is the standard of care for patients with glioblastomas.[7]

The prognosis of grade II - IV malignant glioma is largely dependent on age. Recent studies have mainly focused on older patients and suggest that the benefit of treatment is reduced with age. [8] Cranial irradiation is associated with an increased risk of cognitive impairment.[9] Further, older patients are poorly tolerant to radiotherapy combined with TMZ.[10] Other studies suggest that older patients with a good performance status benefit from radiotherapy [11] and possibly from chemotherapy.[12] In addition, the ANOCEF Phase II results also indicated that TMZ was safe in elderly patients with GBM and poor KPS.[13] Conversely, few studies have focused on the treatment and survival of younger adults (age < 50 years).

In this study, we summarized the clinical management and evaluated the role of age in clinical outcomes of patients diagnosed with grade III and IV gliomas. We determined the clinical efficacy of treatment across different ages, especially younger adults with advanced gliomas in a large population in the Chinese Glioma Genome Atlas (CGGA).

In this study, we analyzed 726 patients diagnosed with advanced (WHO grade III and IV) gliomas from the Chinese Glioma Genome Atlas (CGGA).

Table 2: First-line therapy of patients according to age stratification 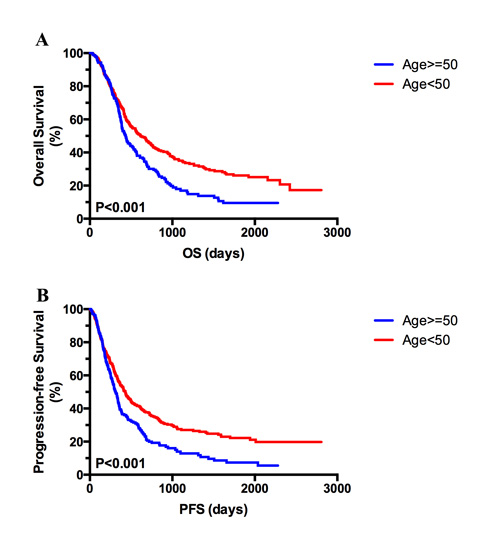 Figure 1: Kaplan–Meier analysis of overall survival (OS) and progression-free survival (PFS) based on age Kaplan–Meier curves showed better prognosis in patients aged < 50 compared with older patients (age ≥ 50) in terms of OS (A) and PFS (B). 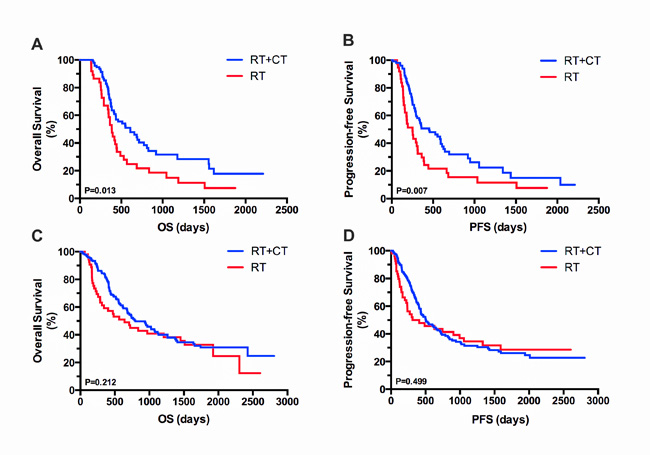 In the OP group of patients with GBM, a favorable OS and PFS was observed among patients treated postoperatively with RT plus TMZ (P = 0.035, Figure 3A and P = 0.013, Figure 3B). In the YP group diagnosed with GBM, patients assigned to RT and TMZ exhibited significantly longer OS and PFS compared with those administered RT alone (P < 0.001, Figure 3C and P < 0.001, Figure 3D).

To determine the correlation between patient survival, and genetic alterations and therapeutic strategies, we analyzed IDH1 mutations, 1p/19q co-deletions and MGMT promoter methylation. Table 3 summarizes the genetic changes in each subgroup (age < 50 or ≥ 50, RT+TMZ or RT alone). No significant differences were found among the different treatment groups in terms of genetic alterations in both anaplastic gliomas and GBMs. In all the patients in the OP and YP groups diagnosed with GBMs, the optimal survival benefit was always found among patients treated with RT combined with TMZ regardless of MGMT promoter methylation. In the YP group with anaplastic gliomas, no survival benefit was observed with RT plus TMZ compared with RT alone, independent of genetic alterations. We also performed Kaplan-Meier analysis of OS and PFS based on genetic changes in the different age groups (Supplemental Figure 1).

Table 3: Comparison of genetic alternation between different subgroups according to age and treatment 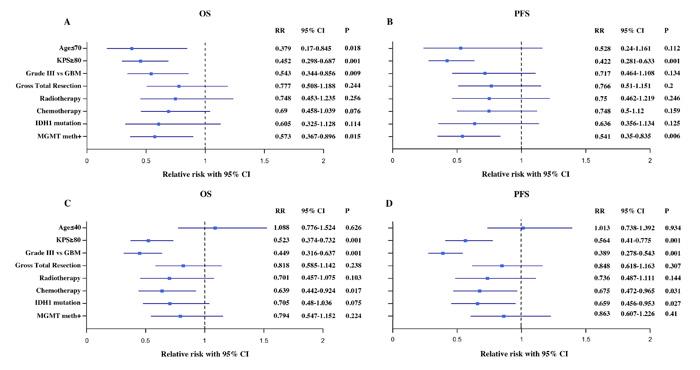 Figure 4: Cox regression analysis of variables related to OS and PFS in OP (A and B) and YP (C and D). Cox model for age (age ≤ 70 vs. > 70 for OP and age ≤ 40 vs. > 40 for YP), KPS ≥ 80 vs. < 80, Grade III vs. GBM, gross total resection vs. no gross total resection, radiotherapy vs. no radiotherapy, TMZ chemotherapy vs. no TMZ chemotherapy, IDH1 mutation vs. no IDH1 mutation, MGMT promoter methylation vs. no MGMT promoter methylation.

Advances in radiotherapy [14, 15] and treatment with nitrosourea-based interventions led to limited therapeutic success.[16] Temozolomide, [17] first used for the treatment of recurrent malignant gliomas, appeared promising for recurrent WHO grade III gliomas. However, the effective response of glioblastomas ranged between 5% and 8%.[18, 19] The role of TMZ chemotherapy was undefined [20] until the EORTC 26981 trial was published. The trial found a significantly prolonged survival in GBM patients treated with adjuvant TMZ chemotherapy.[7]

Since 2005, patients diagnosed with WHO grade III and IV gliomas were recommended TMZ combined with RT. However, patients are unable to afford TMZ therapy due to lack of insurance coverage.[21] We, therefore, analyzed patients exposed to the combination therapyand RT alone. We found a higher efficacy of TMZ in older patients than in younger patients..In the current study, we validated previous evidence suggesting that the combination of RT and TMZ enhanced the survival of GBM patients compared with RT alone, despite age stratification.[7] In contrast, younger patients with anaplastic gliomas (WHO grade III) manifested greater survival following treatment with RT combined with TMZ compared with RT alone.

Age is an independent prognostic factor in grade II-IV malignant glioma. Compared with aged and elderly patients, younger adults show a relatively better prognosis as well as improved general condition. They also exhibit greater tolerance to surgical resection. Anaplastic glioma or glioblastoma patients carrying mutant IDH1 or IDH2 are significantly younger than those harboring wild-type IDH1 and IDH2.[22, 23] Our findings are consistent with these studies in that the frequency of IDH mutations was low in patients aged above 50 (13% vs. 32%, P < 0.0001). The NOA-04 trial and validation cohorts in NOA-08 and the German Glioma Network indicated that methylation of MGMT promoter improved outcomes in patients carrying wild-type IDH.[24] However, the present study offered no definitive evidence suggesting that IDH mutations increased the benefit of adjuvant TMZ chemotherapy. A comparison of genetic alterations across different subgroups according to age and treatment, yielded no significant differences in anaplastic gliomas and GBMs. This finding suggests that age was one of the prognostic risk factors in patients treated with adjuvant TMZ chemotherapy for anaplastic glioma.

Age, extent of resection and tumor grade are established prognostic factors for gliomas. According to clinical practice guidelines [25, 26], both tumor grade and extent of resection are primary risk factors for therapeutic decision-making. However, it remains unclear whether age is an independent prognostic factor in malignant gliomas, especially in younger adults. In this study, we mainly focused on younger adults diagnosed with high-grade gliomas, in an effort to correlate survival with treatment in age-specific subgroups. In spite of the limitations of this retrospective study, we demonstrated no survival benefit in younger adults aged under 50, with anaplastic gliomas treated with RT combined with TMZ compared with RT alone. Conversely, older adults with anaplastic gliomas and GBMs may benefit from RT combined with TMZ treatment. Furthermore, the specific genetic alterations were not prognostic indicators for TMZ chemotherapy in any patients.

Adult patients aged at least 18 years and diagnosed with advanced gliomas (WHO III-IV: AA, AO, AOA and GBM) in the Chinese Glioma Genome Atlas (CGGA) were retrospectively studied. All patients were managed surgically, followed by postoperative radiotherapy, and concomitant and/or adjuvant TMZ chemotherapy at the Glioma Treatment Center of Beijing Tiantan Hospital and Beijing Sanbo Brain Hospital, from October 2004 to July 2012. The study was approved by the hospital ethics committees. All the patients provided written informed consent. The histological diagnosis was validated by two independent neuropathologists and graded according to the 2016 WHO criteria.[3] Patients’ clinical records were reviewed for age at diagnosis, sex, presenting symptoms, preoperative Karnofsky performance status (KPS) score, and surgical status. Patients at least 50 years of age were defined as Older Patients (OP) while those under 50 years were categorized as Younger Patients (YP). Overall survival (OS) was defined as the period starting from operation until death. OS data were primarily collected during patients’ visit to the clinic and via phone interviews with patients and their relatives. Progression-free survival (PFS) was recorded starting with surgery until radiographic progression. The exclusion criteria were: patients lost to follow-up or death from secondary diseases.

Tumor tissue samples were resected surgically before starting radio- or chemotherapy. The tissue specimens were snap-frozen and stored in liquid nitrogen until further use.

Survival was monitored clinically during patient visits and via telephone interviews. Patients who were biopsied were excluded from this study. The baseline examination included magnetic resonance imaging (MRI), total blood counts, hematological tests, and physical examinations. During radiotherapy (with or without TMZ), patients were monitored weekly. Comprehensive investigations included physical and radiological assessments 21 to 28 days after radiotherapy and every 3 months subsequently. Adjuvant TMZ therapy included monthly clinical evaluation and comprehensive assessment toward the end of the third and sixth cycles. Tumor progression was defined by a 25% increase in tumor size, new lesions, or an increased need for corticosteroid therapy.[30]

SPSS 13.0 software (USA) was used to analyze the data. The differences in clinicopathological characteristics between older and younger adult patients were evaluated with X2 test. OS and PFS were estimated using Kaplan–Meier analysis and compared with two-sided log-rank test. Cox (proportional-hazards) regression analysis was used to assess the prognostic role of the clinicopathological factors and statistically significant treatment protocols based on univariate testing. A P-value < 0.05 was considered statistically significant.

Authors declare no conflict of interests.