In 2012, there were approximately 1.7 million newly diagnosed breast cancer patients and 521,900 deaths, accounting for 25% of all new cancer cases and 15% of all cancer-related death in women [1]. Despite the prevalence and severity of breast cancer, the exact mechanism underlying the initiation and progression of breast cancer is still not fully understood. Breast cancer is caused by the interaction of various environmental and genetic risk factors [2, 3]. Environmental variables, such as reproductive factors, hormonal stimulation, high birth weight, obesity, physical inactivity, and alcohol consumption are well-established breast cancer risk factors [4–6]. Moreover, germline mutations in some highly and moderately penetrant genes, including BRCA1, BRCA2, PTEN, TP53, CHEK2, ATM, BRIP1 and PALB2, are associated with high and moderate risk of breast cancer [7, 8]. However, mutations in these genes only explain 25% of breast cancer risk [9]. Single nucleotide polymorphisms (SNPs) in some genes can alter mRNA and protein expression or protein function, and thereby influence cancer susceptibility. A recent genome wide association study (GWAS) has discovered SNPs in 5 lowly penetrant genes as additional susceptibility factors with high frequency, and validated their strong association with breast cancer [10].

As shown in Figure 1, a total of 71 articles were found from Pubmed, EMBASE, and Chinese National Knowledge Infrastructure (CNKI) databases with the use of specific search terms. Of these, 49 articles were excluded after reviewing the titles and abstracts. The remaining 22 articles were subsequently evaluated for full-text review. Another 11 articles were excluded because they lacked sufficient data, were not relevant to the rs3817198 polymorphism, or not in compliance with Hardy-Weinberg equilibrium (HWE). Finally, 11 articles were eligible for the meta-analysis [11–14, 16, 18–23]. Among them, one article reported the association separately in both Caucasian and African populations, thus we extracted two independent studies from the investigation [11]. In the end, 11 articles with 12 studies, comprising 50,525 cases and 54,302 controls were included in our meta-analysis. As listed in Table 1, 6 studies were conducted in Caucasians, 3 in Asians, 1 in Africans, and 2 in mixed populations. Of the 12 studies, 7 were population-based, 2 were hospital-based, and 3 were nested. The genotype frequency distribution of the LSP1 rs3817198 T > C polymorphism in controls was in compliance with HWE in all studies. Furthermore, 10 articles were considered high quality (quality score ≥ 9), and only 2 were considered low quality (quality score < 9). 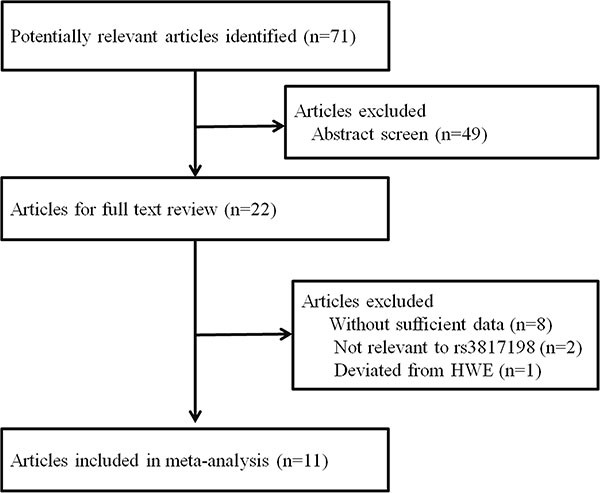 Figure 1: Flowchart of articles included in the meta-analysis.

Table 1: Characteristics of included studies in this meta-analysis

PB, population based; HB, hospital based. 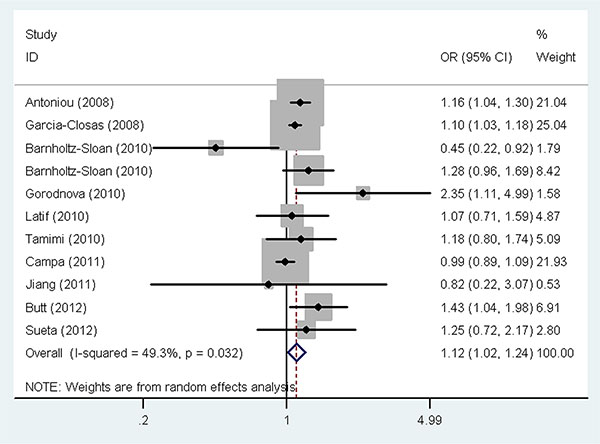 Figure 2: Forest plot of the association between the LSP1 rs3817198 T > C polymorphism and breast cancer risk under a homozygous model. 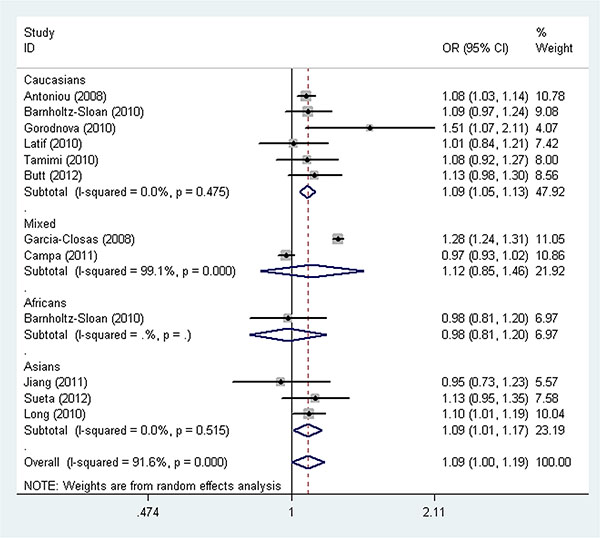 Figure 3: Forest plot of the association between the LSP1 rs3817198 T > C polymorphism and breast cancer risk stratified by ethnicity under an allele contrast model. 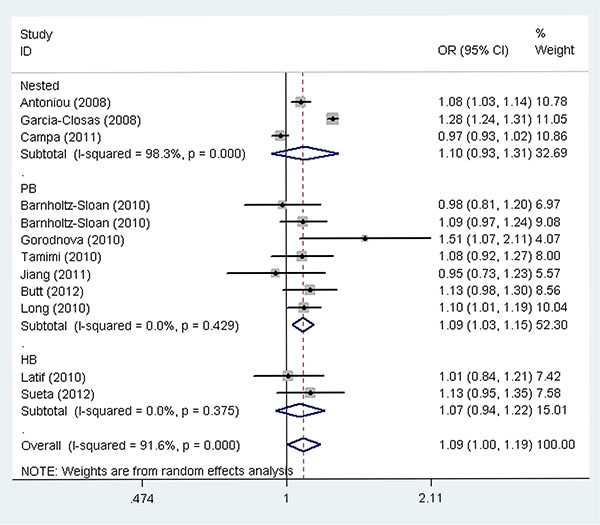 Figure 4: Funnel plot analysis for publication bias by source of control under an allele contrast model.

Several limitations to our meta-analysis should be noted. First, in the stratification analysis by ethnicity, the numbers of studies among Asian and Africans were relatively small. Therefore, the statistical power might be not sufficient to assess the relationship. Second, the source of controls was not uniformly defined. Some studies adopted population-based controls or hospital-based controls, while other studies had nested controls. Third, our meta-analysis results were based on unadjusted risk estimates. We did not have sufficient data to conduct a more precise analysis with adjustment for age, obesity, smoking, drinking, menopausal status, environmental factors and lifestyle. Nonetheless, our meta-analysis provides a more comprehensive assessment of the association between the LSP1 rs3817198 T > C polymorphism and breast cancer risk, and is based on a relatively large sample size. Our results indicate that the LSP1 rs3817198 T > C polymorphism increases susceptibility to breast cancer, especially in Caucasian and Asian populations.

To retrieve all eligible articles that assessed the association between the LSP1 rs3817198 T > C polymorphism and breast cancer risk, we performed a literature search using Pubmed, EMBASE, and Chinese National Knowledge Infrastructure (CNKI) databases prior to July 31, 2016. The search terms that used were as follows: “Lymphocyte-specific protein 1 or LSP1”, “variant or polymorphism” and “cancer or tumor or carcinoma”. Reference lists of relevant studies and review articles were also screened manually for additional eligible articles. Only articles written in English and Chinese were retrieved for further screening.

Eligible studies had to satisfy all of the following criteria: (a) case-control studies in human populations; (b) investigation of the association of the LSP1 rs3817198 T > C polymorphism with breast cancer risk; (c) sufficient information for estimating the ORs and 95% CIs; and (d) genotype frequency distributions in the control group in compliance with HWE. The exclusion criteria were: (a) not a case-control study; (b) abstracts, reviews, or comments; (c) lacking sufficient data; (d) replicating data. If several studies shared the same or overlapping subjects, only the most recent study or the study with the largest number of participants or most complete data was selected.

Two authors independently reviewed and extracted the information from the studies and applied the inclusion and exclusion criteria. If any discrepancy was encountered, a consensus was finally reached by consultation and discussion with a third author. The following data were extracted from each eligible study: the surname of the first author, year of publication, country of origin, ethnicity, source of control, number of cases and controls, allele or genotype frequencies of the LSP1 rs3817198 for cases and controls, evidence of HWE, and quality score (high quality articles with score ≥ 9, low quality articles with score < 9) [27, 28].

The strength of the association between the LSP1 rs3817198 T > C polymorphism and the risk of breast cancer was assessed by ORs and corresponding 95% CIs under five different genetic models. The models were as follows: homozygous model (CC vs. TT), heterozygous model (TC vs. TT), recessive model (CC vs. TC + TT) and dominant model (TC +CC vs. TT), as well as comparison of allele frequencies (C vs. T). We use the Q-statistic to evaluate between-study heterogeneity. For the Q test, a P value greater than 0.10 indicated a lack of heterogeneity. In the case of no heterogeneity, the fixed-effects model (Mantel-Haenszel method) was applied [29]. Otherwise, the random-effects model (the DerSimonian and Laird method) was selected [30]. In addition, the I2 test was also used to quantify the heterogeneity among studies [31]. We also conducted sensitivity analysis to assess the stability of our meta-analysis. In order to do so, we consecutively omitted one study at a time and recalculated OR and 95% CI. Funnel plots and Egger’s linear regression test was used to check for publication bias [32]. All statistical analyses were conducted with STATA Software (version 11.0; Stata Corporation, College Station, TX).