Previous studies based on cell culture and xenograft animal models suggest that Smad3 has tumor suppressor function for breast cancer during early stages of tumorigenesis. In this report, we show that DMBA (7,12-dimethylbenz[a]anthracene), a chemical carcinogen, induces mammary tumor formation at a significantly higher frequency in the Smad3 heterozygous mice than in the Smad3 wild type mice. This is the first genetic evidence showing that Smad3 inhibits mammary tumor formation in a mouse model. Our findings support the notion that Smad3 has important tumor suppressor function for breast cancer.

Smad3 plays a major role in mediating TGF-ß growth inhibitory and apoptotic effects [3, 4]. Smad3 is essential for TGF-ß-induced transcriptional repression of c-myc, Bcl2, Id-1, and hTERT and transcriptional activation of the CDK inhibitors p15 and p21 [3, 4]. TGF-ß-induced growth inhibition and apoptosis is essentially lost in Smad3-/- primary mammary epithelial cells [5]. In addition, TGF-ß/Smad3 upregulates the expression of a set of genes including Ephrin-A1, which is shown to contribute to the TGF-ß/Smad3 tumor suppressive effects in ER-positive breast cancer [6].

Smad3 has been shown or suggested to have tumor suppressor functions in pediatric T-cell acute lymphoblastic leukemia, gastric cancer, colon cancer, pancreatic cancer, and hepatocellular carcinoma [9-13], and Smad3 point mutations have been identified in colon and pancreatic cancers [14-16 and references therein]. Smad3 is rarely mutated in breast cancer. Smad3 point mutation rate in breast cancer is 0.4% (4 mutations out of 952 cases analyzed) (TCGA provision data). Modulation of Smad3 levels are much more frequent events than mutations in breast cancer.

Previous xenograft experiments showing Smad3 tumor suppressor function for breast cancer used the MCF10CA1h cell line [6, 8], which contains an oncogenic H-Ras mutation. Although Ras mutation is not a frequent event for breast cancer, activation of ERK, which is downstream of Ras, is a frequent event in breast cancer. We therefore considered to first test in a mouse model that contains an oncogenic Ras mutation. DMBA is a prototypical polycyclic aromatic hydrocarbon that has been used to promote mammary tumor formation in mouse [19]. DMBA induces oncogenic H-Ras mutation [19]. Mutation rate of H-Ras in DMBA-induced mouse mammary tumors derived from hyperplastic outgrowth lines is estimated to be ~ 60-80% [20]. It should be noted while an area of active research, there is no causal link between the exposure to polycyclic aromatic hydrocarbons and human breast cancer. The use of DMBA-induced mammary tumorigenesis is primarily relevant from the standpoint of the role of Smad3 as a tumor suppressor. We show in this study that DMBA-induced mammary tumor formation is accelerated in the Smad3+/- mice compared to the Smad3+/+ mice.

The Smad3+/- mice are in a mixed C57BL/6/129 genetic background [17]. Smad3+/- mice were mated with each other to produce Smad3+/+ and Smad3+/- mice. Each of the Smad3+/+ and Smad3+/- female mice in cohorts was given 1.0 mg dose of DMBA by oral gavage once a week for 5 weeks, beginning at 5-6 weeks of age. A mammary tumor occurred as early as 13 weeks after the first dose of DMBA in one Smad3 heterozygous mouse. Tumor formation was monitored for six months after beginning DMBA.

All palpable tumors were collected, and were analyzed histopathologically after hematoxylin and eosin (H & E) staining. As shown in Table I, at the end of the experiments, 8 out of 23 Smad3 wild type mice developed tumors, whereas 17 out of 26 Smad3 heterozygous mice developed tumors. It should be noted that some mice did not survive to the end of the experiments due to the adverse effects of DMBA. This occurs to both Smad3 (wild type) and Smad3 (heterozygous) mice. These mice died or were sacrificed early, usually within 1-2 months after the initial dose of DMBA. They had not developed mammary tumors at the time of death (data not shown). These mice are not included in our counting of animal numbers.

Table I: Number of mice with tumors 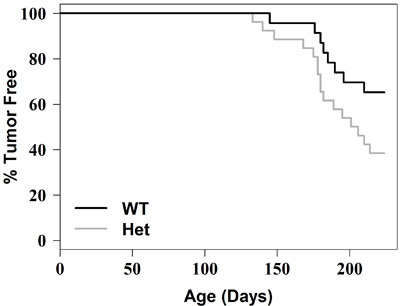 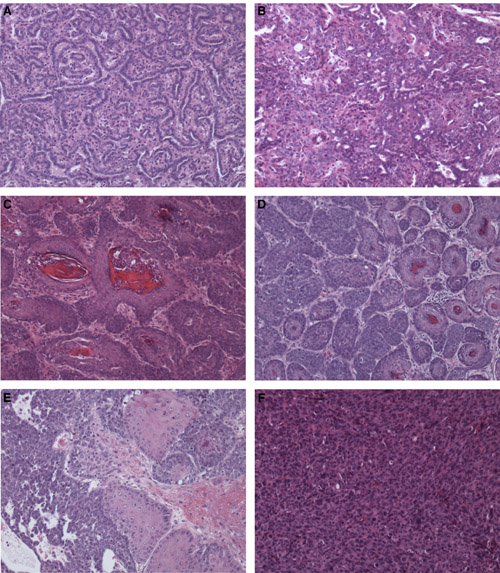 Unexpectedly, when we analyzed the levels of cleaved caspase-3, we found that the activated caspase-3 levels were greatly increased in 3 of the 8 Smad3 (Het) adenosquamous carcinomas (Figure 3B). It should be noted that the tumors were not necrotic. The increased activated caspase-3 was not due to necrotic tumors. A recent study showed that mammalian cells, including breast epithelial cells, can survive with persistent caspase-3 activation, which causes limited DNA strand breaks [24]. This promotes genetic instability and oncogenic transformation [24, 25]. In addition, it has been shown that caspase-3 promotes skin carcinogenesis induced by DMBA + TPA treatment [24].

Although the activated caspase-3 increased greatly in the Smad3 (Het) tumors #6, #7, and #8, the apoptosis was not increased. In the TUNEL assay, the TUNEL positive cells were 1-3% in both the wild type group involving Smad3 (WT) tumors #1, #2, #3, and #4 and the heterozygous group involving Smad3 (Het) tumors #6, #7, #8, #9, and #10 (data not shown). This is consistent with the idea that persistent activation of caspase-3 can cause limited DNA breakage, leading to genetic instability and malignant transformation.

It should be noted that the Smad3 (Het) tumors #6, #7, and #8 do not show correlation with the tumor occurrence time, the size of the tumors, or the aggressiveness of the tumors. Analysis of more tumor samples in the future is necessary to establish whether there is a causal link. A related question is by which mechanism the reduced Smad3 levels lead to the markedly increased activated caspase-3 in those three Smad3 (Het) tumors.

Another strong message from the cleaved caspase-3 Western blot is that the tumors are extremely heterogenous. Three other Smad3 (Het) tumors contain very low levels of activated caspase-3 (Figure 3B). Approximately 70% of the DMBA-induced mammary tumors contain an oncogenic Ras mutation. The Ras pathway can inhibit Smad3 function through ERK and CDK phosphorylation of Smad3 [26-33]. Whether this activity in conjunction with reduced Smad3 levels has a role for the increased levels of activated caspase-3 remains to be determined. The remaining ~ 30% tumors contain other genetic and epigenetic changes. The diverse genetic and epigenetic background may account for in part the differences in the cleaved caspase-3 levels.

We also attempted to include Smad3-/- mice in this study. Since a significant proportion of Smad3 null mice do not survive longer enough for tumor development after DMBA administration, we are not able to achieve statistically significant results (data not shown). In addition, since Smad3 null mice have certain defects [13, 17, 18], this complicates the interpretation of the data with the use of Smad3 null mice. Our results in this study suggest that Smad3 has important tumor suppressor function for breast cancer. In the future, it is warranted to examine whether Smad3 mammary null mice develop tumors and whether Smad3 mammary deficiency accelerates oncogene-driven or mutant p53-driven mammary tumorigenesis.

In conclusion, we have shown that deletion of only one copy of the Smad3 gene is sufficient to significantly increase the frequency of DMBA-induced mammary tumorigenesis. The tumors are extremely heterogeneous. Future studies are necessary to answer a number of important questions. 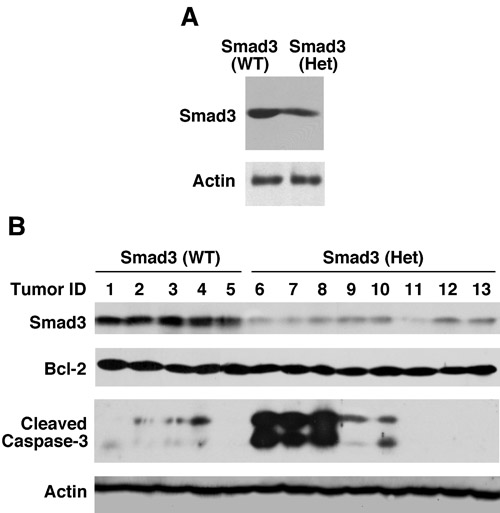 Palpable tumors were dissected. They were fixed in 10% formalin/PBS and then preserved in 70% ethanol. Tumor samples were paraffin embedded, sectioned into slides with 4 micron thickness, and H & E stained by the Biospecimen Repository Service and Histopathology Shared Resources of the Rutgers Cancer Institute of New Jersey. All tumors were examined histopathologically after H & E staining. Mammary tumors were classified into papillary adenocarcinoma, adenocarcinoma, squamous cell carcinoma, adenosquamous carcinoma, and poorly differentiated carcinoma.

Statistical analysis was carried out using the log-rank test or Chi-square test.

This work was supported by grants from the NIH (CA93771) and the Charles and Johanna Busch Memorial Fund (to F. L.).