Background: Adenosquamous carcinoma is a rare and aggressive form of lung cancer. The prognostic and predictive value of preoperative serum tumor markers and frequency of EGFR mutations in adenosquamous lung carcinoma are unclear.

Methods: We retrospectively analyzed data and samples collected from 106 radically resected adenosquamous lung carcinoma patients with pathological stage I-IIIA between 2008 and 2013. Correlations between serum tumor marker levels and EGFR mutations as well as survival parameters were analyzed and prognostic factors were identified.

According to criteria of World Health Organization, adenosquamous lung carcinoma is a carcinoma displaying components of both squamous cell carcinoma and adenocarcinoma, with each component comprising at least 10% of the tumor [3]. Adenosquamous lung carcinoma is regarded as more aggressive and carries a worse prognosis compared to adenocarcinoma and squamous cell carcinoma [1, 4]. However, its biological behaviors based on clinicopathological factors are not well understood. Most adenosquamous lung carcinoma patients eventually develop local recurrence and/or distant metastasis even after complete tumor resection, and the overall survival rates remain low. Standard platinum-based doublet chemotherapy of advanced non-small cell lung cancer has limited efficacy, thus new therapies are needed.

Recent advancements in EGFR mutation targeted therapy led to a major paradigm shift in the treatment of non-small cell lung cancer. EGFR-sensitizing mutations are strongly associated with robust responses to EGFR tyrosine kinase inhibitors (EGFR-TKI) and improved progression-free survival (PFS). However, EGFR mutations are most common in Asian patients, nonsmokers, females and those with adenocarcinoma histology [5]. In squamous cell carcinoma, the EGFR mutation rate is reported to be approximately 5% [6]. Although several small studies have indicated that the frequency of EGFR mutation in adenosquamous lung carcinoma ranges from 15% to 44% in the East Asian population, the exact prevalence of EGFR mutation in adenosquamous lung carcinoma is still not clear.

As shown in Table 2, preoperative NSE, CEA, Cyfra21-1 and SCCA levels were elevated in 35.8%, 47.2%, 54.7% and 15.1% of adenosquamous lung carcinoma patients, respectively. Elevated preoperative NSE levels were closely associated with advanced clinical stage (P = 0.006), smoking history (P = 0.036) and regional lymph node metastasis (P = 0.005). In addition, median NSE levels in patients with larger tumor size were higher than those with smaller tumor size (14.7 versus 13.7 ng/ml, P = 0.045). And increased SCCA levels were found to be correlated with tumor size (P = 0.011). Neither CEA nor Cyfra21-1 levels were correlated with any clinical parameter in adenosquamous lung carcinoma patients. Median levels and positive rates for NSE, CEA, Cyfra21-1 or SCCA were similar regardless of EGFR mutation status in adenosquamous lung carcinoma patients. Similarly, no differences were found in positive rates and median levels of these tumor markers between del19 and L858R subtypes. 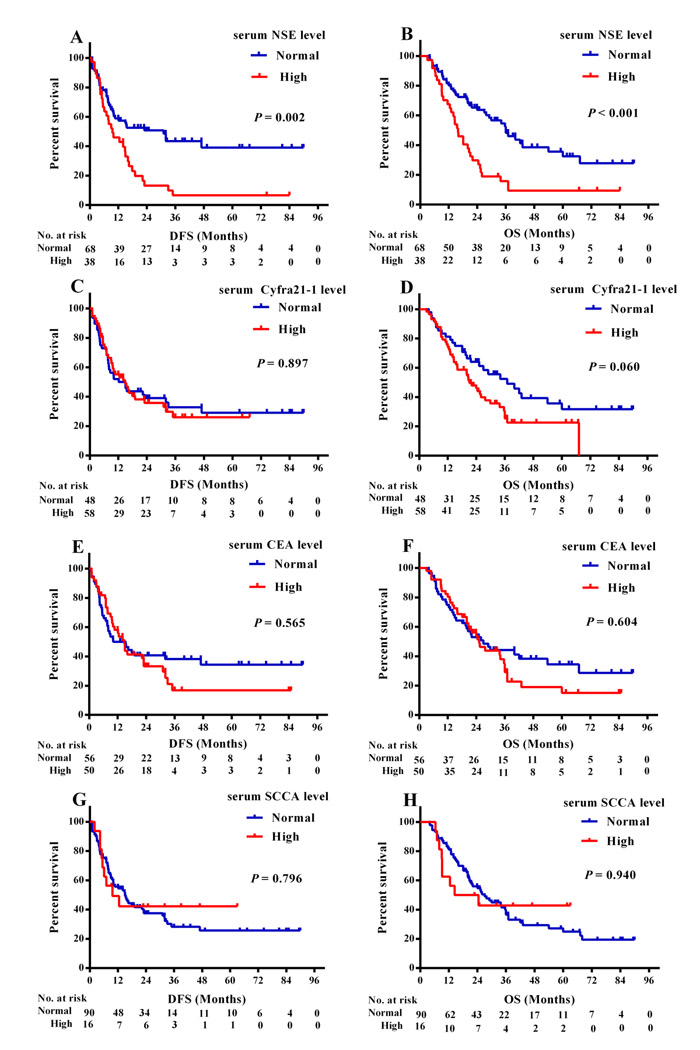 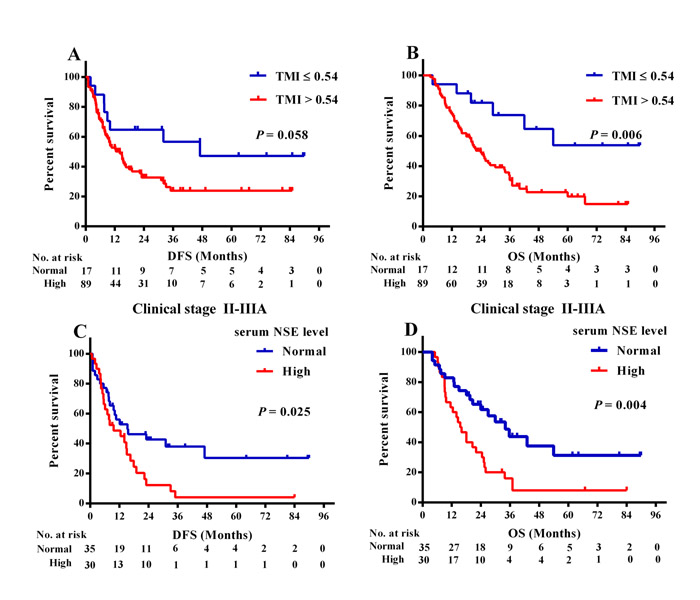 Preoperative serum tumor markers secreted by tumor cells might reflect intratumor heterogeneity, and have been investigated as tools for predicting disease progression, either alone, or in combination with clinical variables [14]. However, the predictive and prognostic significance of the tumor markers for adenosquamous lung carcinoma remains largely unknown. EGFR mutations are most common in adenocarcinoma, while their frequency in the context of adenosquamous lung carcinoma remains controversial.

In this study, we found that the EGFR mutation rate (29/106, 27.4%) was relatively high in adenosquamous lung carcinoma patients but had no effect on disease-free survival or overall survival. Furthermore, we demonstrated that elevated NSE and TMI were independently unfavorable predictors. No significant difference in disease-free survival or overall survival were observed between patients with high carcinoembryonic antigen (CEA), cytokeratin 19 fragments (Cyfra21-1) or squamous cell carcinoma antigen (SCCA) levels compared to those with lower levels.

A previous study found that the amount of adenocarcinoma components did not affect the survival rate, while another reported that adenocarcinoma predominant tumors were considered to be a worse prognostic factor [18-20]. Conversely, Gawrychowski et al observed that a balance of squamous and adenocarcinoma components had better prognosis than either being predominant [17]. In the present study we found no significant difference in disease-free survival or overall survival between adenosquamous lung carcinoma patients based on dominant component. This difference in results between our study and others could be attributed to different sample sizes, or the fact that biopsies come from small regions of the tumor which may underrepresent adenosquamous carcinoma histologic characteristics.

EGFR mutation has been reported to be a good outcome predictor for patients with non-small cell lung cancer. Consistent with previous studies [21, 22], we observed that EGFR mutation frequency was increased in never-smokers and in females. However, no correlation between EGFR mutation status and patient survival was observed, which may result from the low incidence of EGFR-TKI treatment in this cohort (5/29). Two additional reports were unable to detect a significant association between EGFR mutation and prognosis in patients who did not receive EGFR-TKI therapy [23, 24]. In addition, a prior study showed an adenosquamous lung carcinoma patient harboring EGFR-sensitizing mutation had a remarkable response to gefitinib [25]. Therefore EGFR tyrosine kinase inhibitors would be a reasonable therapeutic option to adenosquamous lung carcinoma patients due to the relatively high frequency of EGFR mutations in this cohort.

According to previous studies, serum NSE level in non-small cell lung cancer may reflect the heterogeneity and neuroendocrine phenotype and was as a prognostic factor for neuroendocrine lung tumors [26, 27]. However, the predictive value of NSE in non-small cell lung cancer are unclear, since several studies did not observe a prognostic role, while others have reported that elevated NSE is associated with poor prognosis [7, 8, 28]. NSCLC with neuroendocrine properties was previously reported to be chemosensitive but was associated with poorer outcomes similar to small cell lung cancer.[29] In another study, elevated serum NSE predicted NSCLC resistance to EGFR-TKIs and it was speculated that transition to small cell lung cancer occurred after acquisition of EGFR-TKI resistance [9]. Interestingly, sequential NSE level measurement has predicted tumor recurrence, dropping during effective treatment, but rising again after relapse [30, 31]. And Bastide et al. found adenosquamous lung carcinoma is more phenotypically similar to neuroendocrine tumors compared to adenocarcinoma lung cancer or squamous cell lung cancer [32]. Further, we confirmed that high NSE level in adenosquamous lung carcinoma confers a poorer prognosis. A strong positive association was identified between preoperative NSE and clinical stage as well as lymph node metastasis. Elevated NSE levels gave a poorer prognosis to patients with advanced staged tumors compared to those with earlier stage disease. These results suggest that NSE reflects tumor burden and aggressiveness, consistent with previous studies. Therefore, our results suggest that these patients should undertake a more aggressive clinical course.

Cyfra21-1 and CEA have been confirmed as valuable prognostic factors for NSCLC. Previous studies found that Cyfra21-1 tends to be more useful for squamous cell carcinoma diagnosis while CEA is predictive for adenocarcinoma.[10, 12, 33] In our study, elevated levels of neither Cyfra21-1 nor CEA were associated adenosquamous lung carcinoma patient prognosis. Interestingly, the TMI evaluating both Cyfra21-1 and CEA simultaneously was an independent prognostic marker for overall survival (HR = 2.479, 95% CI: 1.050-5.855, P = 0.038). This result might reflect that adenosquamous lung carcinoma stems from a monoclonal expansion of a single mutant progenitor cell clone, maintaining both adenocarcinoma and squamous cell carcinoma characteristics [32, 34, 35]. However, the molecular mechanism of trans-differentiation into adenocarcinoma or squamous cell carcinoma requires furthermore exploration.

Our retrospective study has some limitations. First, some data was censored, the patient sample size was relatively small, and patients undertook different chemotherapeutic regimens. In addition, we did not investigate the adenosquamous lung carcinoma components separately so it is not known which harbored identified EGFR mutations. It has been reported that adenocarcinoma and squamous cell carcinoma components can possess the same EGFR mutation, suggesting that the histologic origin of adenosquamous lung carcinoma can be monoclonal [22].

In conclusion, our results demonstrate that elevated preoperative NSE level has adverse predictive and prognostic value. In addition, TMI based on serum CEA and Cyfra21-1 is also an independent prognostic for overall survival. A larger prospective study will be needed to confirm these results.

A total of 106 adenosquamous lung carcinoma patients who underwent curative-intent complete resection between January 2008 and January 2013 at the Tianjin Medical University Cancer Institute & Hospital were enrolled in this retrospective study. The study was approved by the Institutional Review Board of Tianjin Medical University Cancer Institute & Hospital and informed consent was obtained from all patients. The following patients are excluded: (1) locally advanced (stage IIIB), metastasized (stage IV), or postsurgically relapsed adenosquamous lung carcinoma; (2) insufficient tissue specimens or unavailable for genetic analysis; (3) blood samples not obtained before operation, or serum tumor marker records were unavailable; (4) patients who died within one month after surgery; (5) preoperative chemotherapy or radiotherapy; and (6) history of second primary cancer diagnosed within 5 years. Patient characteristics are shown in Table 1.

Tumor marker index (TMI) was defined by the geometric mean of normalized CEA and Cyfra21-1. It was calculated as described recently (TMI = square root of CEA concentration/5.0 ng/ml × Cyfra21-1 concentration/3.3 ng/ml). The cut-off point for TMI was 0.54 according to results of Muley et al [36].

EGFR mutations were identified by polymerase chain reaction based direct sequencing to detect the nucleotide sequencing of the kinase domain of EGFR of individual exons (18-21 exons).

Data are presented as the mean ± SD or median and IQR (intraquartile range). Fisher’s exact test or chi-square test was conducted to compare the distribution of categorical variables. The Mann-Whitney U-test or Kruskal-Wallis one-way ANOVA test was used to compare continuous data. Overall survival (OS) was defined as the time from the date of surgery to the date of final follow-up or death from any cause. Disease-free survival (DFS) was calculated from the date of surgery until the date of the first recurrence or death from any cause. The survival curves were estimated using the Kaplan-Meier method, and differences were evaluated using the log-rank test. Hazard ratios (HR) and 95% confidence intervals (95% CI) were assessed by univariate and multivariate analyses using the Cox proportional hazards model. The independent prognostic factor was estimated by the Cox proportional hazards model using stepwise regression (backward selection). A P value less than 0.05 was considered to indicate a statistically significant difference. SPSS 22.0 for Windows (SPSS, Chicago IL) was performed to analyze data.

We are grateful to Dr. Douglas E. Linn (Brigham & Women’s Hospital, Boston, MA, USA) for critical reading of the manuscript.