Pancreatic cancer, the fourth leading cause of cancer related death in the United States among both men and women [1] is one of the few malignancies with high mortality and short median survival period [2]. The high mortality is derived from the fact that most patients are present with metastatic or locally advanced diseases at the time of diagnosis. In addition, the pancreatic cancer cells are resistant to conventional chemotherapy and radiotherapy [3–6].

At the molecular level, pancreatic malignancies are progressed from non-neoplastic cells to invasive adenocarcinoma through a series of pre-malignant lesions characterized by progressively increasing dysplasia. These precursors are named as pancreatic intraepithelial neoplasia (PanINs) with well-characterized stages including PanIN-1a-flat, PanIN-1b-papillary without dysplasia, PanIn-2-papillary with dysplasia, and PanIN-3-carcinoma-in situ [4]. Development of pancreatic malignancies is resulted from orchestrated actions of canonical oncogenes and tumor suppressor genes, such as Ki-Ras, p16, p53, Smad4 and BRCA2. The functions of these genes are regulated by various cellular signaling pathways including TGFβ/SMAD, PI3K/AKT, and MAPK pathways [7–17].

αA-crystallin is a member of the small heat-shock protein family (sHSPs) with multiple functions. Small HSPs act as molecular chaperones, and participate in signaling transduction, cell proliferation, cell metabolism, cell survival, apoptosis, senescence, exocytosis and endocytosis [18–22]. Studies from numerous laboratories including ours have revealed that sHSPs also actively regulate tumorigenesis [23–26]. As a major lens structural protein, αA-crystallin is also expressed in non-lenticular tissues including retina, spleen and thymus [27]. Our recent study demonstrated that αA-crystallin is significantly expressed in mouse pancreas [28]. Moreover, analysis of αA-crystallin in the tissue array samples from normal human pancreas and dozens of cases of pancreatic carcinoma reveals significant difference. αA-crystallin is decreased over 10-fold in the pancreatic carcinoma of various types than that in normal pancreas, suggesting that αA-crystallin has tumor suppression functions. Moreover, αA-crystallin negatively regulates cell migration as shown in the pancreatic cancer cell wound healing assay [28]. 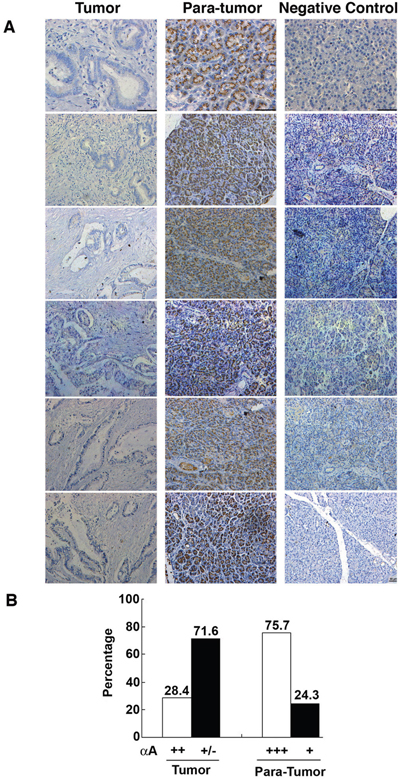 Relationship between αA-crystallin expression and clinical outcome of patients

P-values were two-tailed and based on the Pearson chi-square test. P<0.05 are statistically significant. 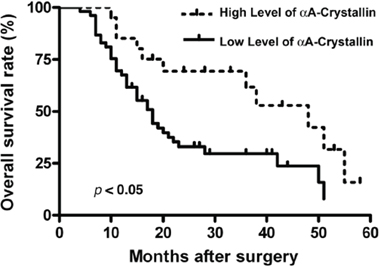 Furthermore, multivariate analysis revealed that tumor size, differentiation, pT classification, lymph node metastasis and neural infiltration were unfavorable predictors for OS of PDAC patients, but αA-crystallin was associated with OS (Table 2). Together, a low αA-crystallin level may be used independently to predict poor prognosis for patients with PDAC. 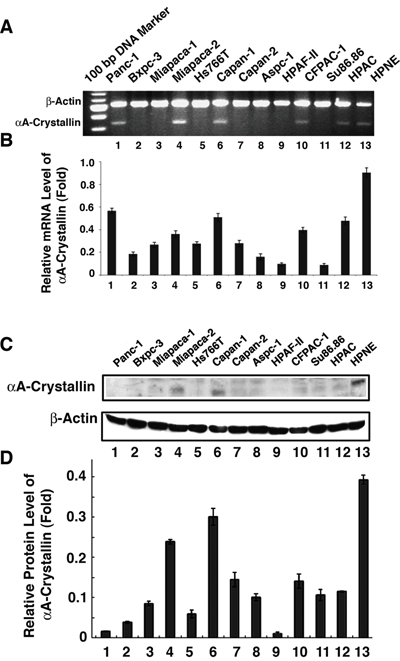 Figure 3: Detection of αA-crystallin mRNA and protein expression in pancreatic cancer cell lines. A. mRNA levels of αA-crystallin was determined by semi-quantitative RT-PCR assay. Total RNAs were extracted from 12 pancreatic cell lines (Panc-1, Bxpc-3, Miapaca-1, Miapaca-2, Hs766T, Capan-1, Capan-2, Aspc-1, HPAF, CFPAC-1, Su86.86 and HPAC) and HPNE cells (as control), then were used for RT-PCR analyses respectively. B. Western blot assays were performed to detect the expression of αA crystallin protein in 12 pancreatic cell lines and HPNE cells. Total proteins were prepared and subjected to western blot assay to determine the expression of αA-crystallin protein. β-actin was used as an internal control. The data shown are representative of three independent experiments. Note that while mRNA was detected in Miapaca-2, Capan-1, Panc-1, CFPAC-1 and HPAC-1, αA-crystallin protein was detected with moderate levels in Miapaca-1 and Capan-1 but much reduced in other pancreatic cancer cell lines in comparison with the control cell, HPNE. 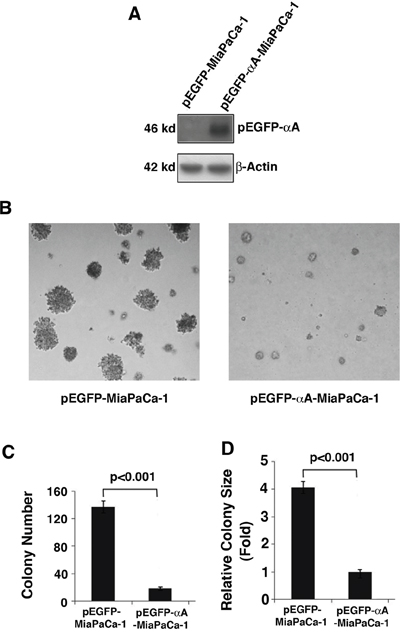 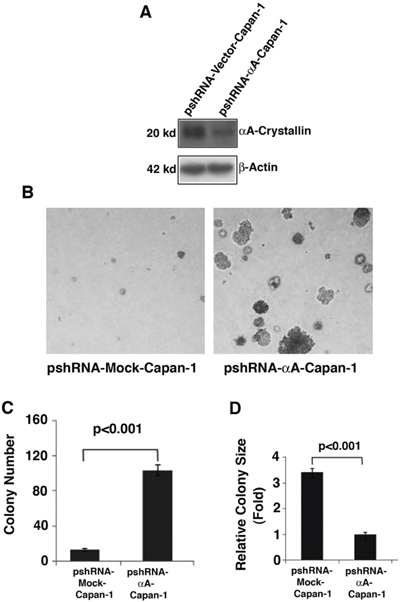 To explore how αA-crystallin may regulate carcinogenesis, we conducted wound healing assays using the established stable cell lines: pEGFP-MiaPaCa-1 and pEGFP-αA-MiaPaCa-1. As shown in Figure 6A & 6B, MiaPaCa-1 cells expressing αA-crystallin displayed statistically significant inhibition in cell migration. In contrast, the same cells expressing EGFP-vector did not show such effect. Thus, αA-crystallin also regulates migration of pancreatic cancer cells, which is consistent with its decreased expression in various types of pancreatic carcinoma (Figure 1). 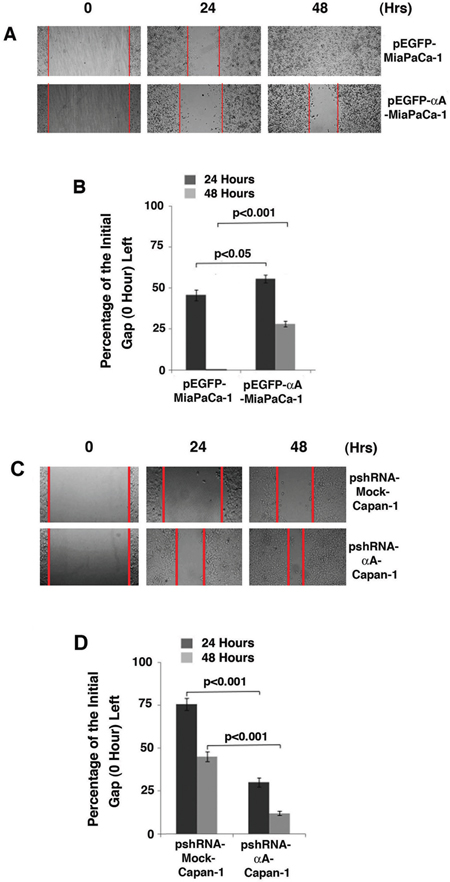 Since expression of exogenous αA-crystallin in MiaPaCa-1 cells retards its cell migration in the wound healing assay, we next conducted wound healing assay using the established stable cell lines: vector-Capan-1 and αA-crystallin siRNA plasmid-transfected Capan-1 cells. As shown in Figure 6C & 6D, Capan-1 cells expressing αA-crystallin shRNA displayed statistically significant increase in cell migration. In contrast, the same cells expressing vector did not show such effect. Thus, the tumorigenicity ability of capan-1 cells is also dependent upon the level of the endogenous αA-crystallin.

The αA-crystallin and αB-crystallin are initially known as lens structural proteins with about 60% identity in amino acid sequence with each another [30–31]. Several lines of evidence have shown that although the two genes encoding αA- and αB-crystallins seem to arise from gene duplication, they have diverged significantly [32]. First, during mouse development, the two genes are initially turned on at different time. While αB mRNA is first becoming detectable at E9.5, expression of αA mRNA appears at E10.5 [32]. Such differential temporal patterns reflect the differential control mechanisms of the two α-crystallin gene promoters. Second, the two genes display distinct tissue-specific expression patterns. While αA is highly restricted to lens during mouse embryonic developmental process, αB-crystallin is expressed in the developing heart, nasal epithelium, and retinal pigment epithelium [33–35]. In the adult vertebrates, although both αA and αB are abundantly expressed in the lens, they display significantly difference in non-lenticular tissue expressions. αB is strongly expressed in heart, skeletal muscle, kidney and brain [34–35]. In contrast, αA is reported to be expressed at very low level in some non-lenticular tissues including spleen, thymus, heart, brain and liver [35–36]. Our recent studies have shown that αA is also moderately expressed in normal human and mouse pancreases besides its low level of expression in kidney and liver [28].

Our results also show that in various pancreatic cancer cell lines examined, only two cell lines, Capan-1 and MiaPACA-2, have detectable αA-crystallin in comparison with the normal HPNE cells (Figure 3). Capan-1 was derived from the liver metastasis of a 40-year-old male with PDAC in the head of the pancreas [55]. On the other hand, MiaPaCa-2 was obtained from a 65-year-old male of PDAC with a palpable upper abdominal mass. The tumor involved the body and tail of the pancreas and had infiltrated the periaortic area [56]. Phenotypically, both cell lines can bind to type I collagen [57–60], have similar invasive properties as tested in Matrigel [38, 60–61], but display differential expression level of COX-2 [62–65], and tumorigenicity ability as assayed in xenograted animal [66–68]. Genetically, both cell lines have mutations in Kras [69] and p53 [69–70], homozygous deletions in p16 [70–71]. However, they have contrast genetic background in Smad 4. While Capan-1 has a mutated gene [72–73], MiaPaCa-2 has a wild type Smad4 gene [69–71, 74]. Regardless their similarity and differences in their phenotype and genetic background, our results demonstrated that knockdown of the endogenous αA-crystallin in both cell lines significantly increases their tumorigenicity (Figures 5 & 6, and data not shown). On the other hand, expression of αA-crystallin in MiaPaCa-1 and another pancreatic cell line, Capan-2 lacking endogenous αA-crystallin significantly decreased their tumorigenicity as tested in the colony formation and wound healing assays (Figures 4A & Figure 6, and data not shown). Together, out results demonstrate that αA-crystallin negatively regulates pancreatic tumor development. Lack of αA-crystallin expression in pancreas may be part of the mechanisms initiating development of pancreatic cancer. We are currently characterizing the exact mechanisms by which αA-crystallin suppresses pancreatic tumorigenesis.

The specimens including tumor and matched adjacent non-tumor tissues that were obtained from 74 patients with PDAC who underwent surgical pancreatic resection without preoperative anticancer treatment at the Cancer Center of Guangzhou Medical University and Southern Medical University between May 2005 and June 2010. Ethical approval for the human subjects was obtained from the Ethics Committees of both universities and informed consent was provided to all patients who were followed for 5 years for complete clinical data. Detailed clinical and pathological parameters are summarized in Table 1. Tumor samples were confirmed by histologists in the hospital and were staged according to the TNM classification system endorsed by the World Health Organization. Overall survival (OS) was computed from the day of surgery to the day of death or to the last follow-up.

The expression level of the mRNA for alphaA-crystallin in human normal and pancreatic carcinoma cell lines were detected using RT-PCR as previously described (28, 88-97). RNA extraction was conducted with RNAeasy kit (Invitrogen). Reverse transcription was conducted with 450 ng total RNA and oligo(dT) primers (Promega). The oligonucleotide primers synthesized by Invitrogen, Inc. were as follows: for alpha A, 5’-ATGGACGAGAAGGTGTTC-3’ (forward) and 5’-TAACGAACCTTAAG-AGCTAC-3’ (reverse) with the amplified fragment of 310 bp; and for human β-actin, 5’-ACATGGCATTGTTACCAAC-3’ (forward) and 5’-CGTTGCCAATAGTGA-TGAC-3’ (reverse) with the amplified fragment of 541 bp. PCR was run 30 cycles with an annealing temperature of 50°C.

Preparation of total proteins from parent and various transfected cells and Western blot analysis of different protein samples were conducted as previously described [88–97].

αA-crystallin knockdown or over-expression cells or control cells were suspended in a medium containing 0.33% agar and overlaid on 0.5% agar in 6-well plates (500 cells/well) as described before [28, 98]. After 14 days, colonies were counted and photographed. The results were expressed as the means ±SD of triplicate counts.

Four types of stable clones of pEGFP-Miapaca-1, pEGFP-αA-Miapaca-1, psiRNA-Vector-Capan-1 and psiRNA-αA-Capan cells-1 [28] were seed in 6-well plates and cultured until 100% confluent. A straight scratch was made by using a 1 ml blue pipette tip to simulate the wound in each well. After PBS washing for 2 times, new DMEM medium was added for a continuous growth of another 48 hours. The wound healing process was recorded daily using the Leica Fluorescence Microscopy with a 10x objective as described before [28, 98].