Nowadays, cancer has emerged as one of the most serious public health problems worldwide [1-3]. Despite intensive efforts have been made to improve the efficacy of cancer diagnosis and therapy, the overall survival (OS) time of cancer patients is still short [1-3]. It is very necessary to identify more reliable biomarkers for early diagnosis, accurate prognosis prediction, and efficacy for cancer patients [2]. Emerging evidence has demonstrated that genetic factors are considered to influence the cancer development, treatment effectiveness, survival time of cancer patients, therefore affect the prognosis of patients [3, 4]. It has been speculated that DNA damage was significantly associated with the DNA repair capacity [5-7]. The genetic variants in DNA repair genes alter the activity of DNA repair, thus influence the effectiveness of therapy, prognosis and survival of patients [1, 3, 4, 6]. The DNA repair genes have been identified in different DNA repair pathways [5-7]. The nucleotide excision repair (NER) pathway is the most versatile repair mechanism responsible for repairing bulky DNA damage [5]. The xeroderma pigmentosum complementation group G (XPG), also known as excision repair cross-complementation group 5(ERCC5), is one of the critical DNA repair enzymes of NER pathway. XPG gene is located on chromosome 13q32-q33, and encodes a protein of 1186 amino acids, which containing 15 exons and 14 introns. Previous studies indicate that the XPG rs2296147T>C polymorphism is suspected to have relationship with the clinical outcomes of cancer patients, such as colorectal cancer (CRC) [8–11], epithelial ovarian cancer (EOC) [12, 13], head and neck cancer(HNC) [14], non-small cell lung cancer (NSCLC) [15–19], gastric cancer (GC) [20] and osteosarcoma (OC) [21, 22]. Published data from these studies have shown inconsistent results. However, a systematic review and meta-analysis is still lacking. Thus, the aim of this meta-analysis was designed to summarize the currently available published findings and comprehensively assess the reliable predictive value of XPG rs2296147T>C polymorphism on clinical outcomes of cancer patients. 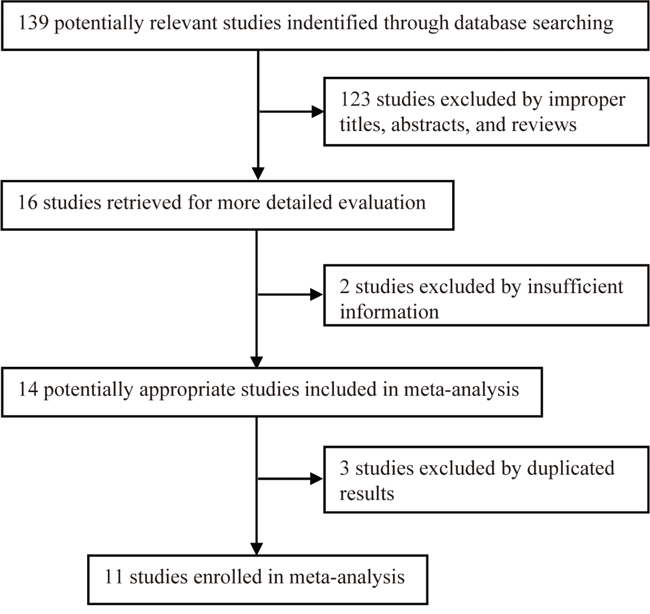 Figure 1: The flow diagram of the study selection process in meta-analysis.

Table 1: The characteristics of enrolled studies in the meta-analysis

aHR for T versus C. bHR for Whites. cHR for African Americans. 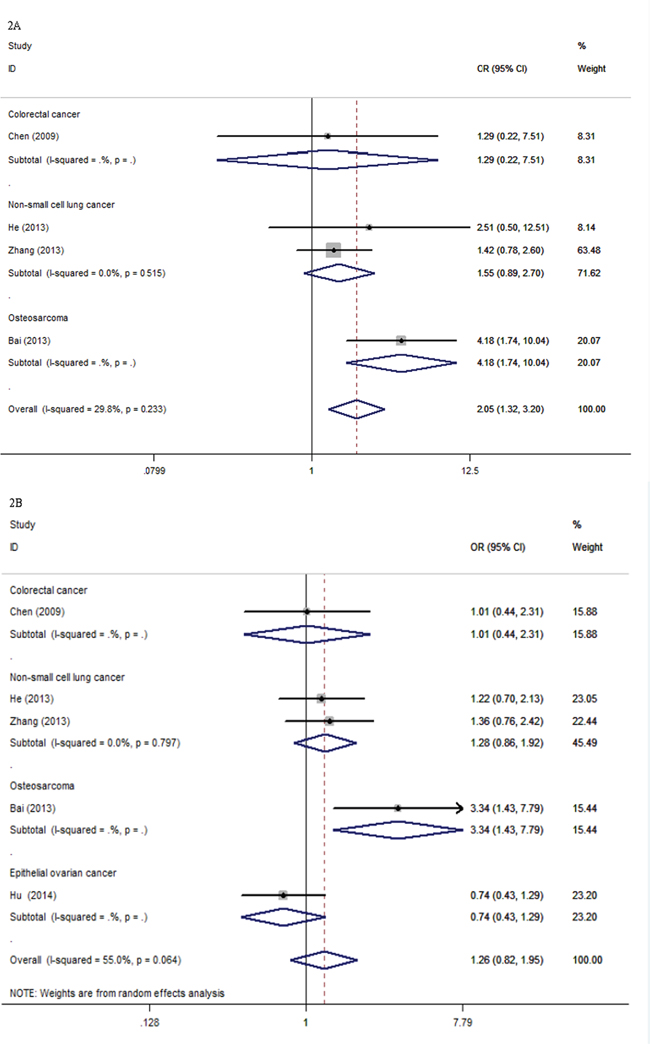 aThe detailed references are given in Table 1 and 2. bThe OR for objective response rate. cThe HR for overall survival and progression-free survival. 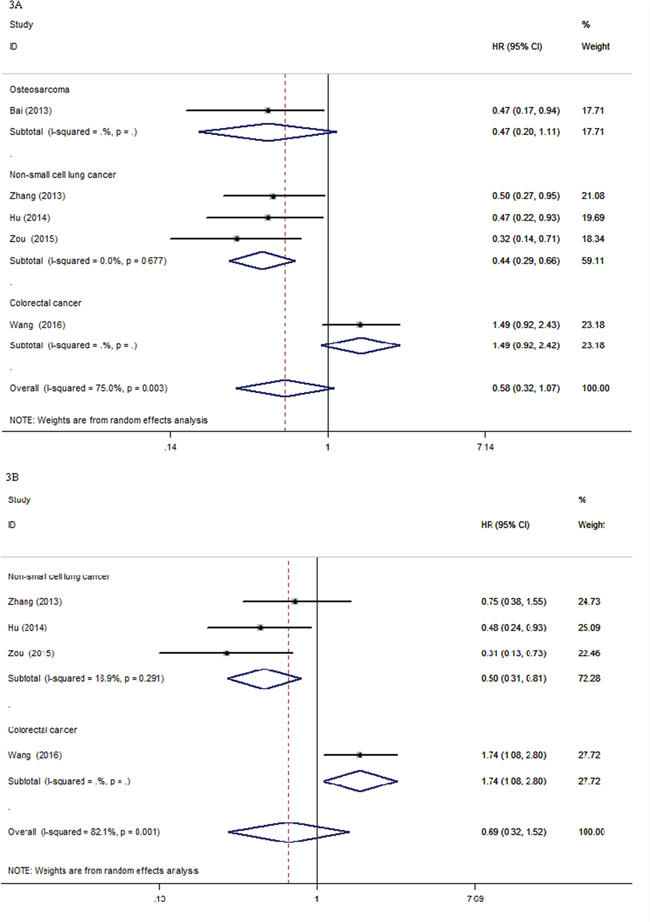 No other significant associations between the XPG rs2296147T>C polymorphism and clinical outcomes of cancer patients were observed in this meta-analysis (Table 3).

No obvious publication bias was found through either the inverted funnel plots or Begg’s test (data not shown). In the sensitivity analysis, changing the effect models had no significant effects on the pooled ORs/HRs, and did not influence the final strength of association between XPG rs2296147T>C polymorphism and clinical outcomes of cancer patients. The influence of excluding each study on the pooled ORs/HRs was recalculated by repeating the meta-analysis, and the results indicated that excluding each study did not significantly change the overall effects, suggesting that our results are credible.

The cumulative meta-analyses based on year of publication showed an apparent beneficial objective response of TT genotype on cancer patients in the recent studies. As shown in Figure 4, between 2009 and 2014, five studies were enrolled, resulting in an overall effect estimate of OR being 1.26 (95% CI, 0.82-1.95, TT vs. CT+CC, Figure 4). 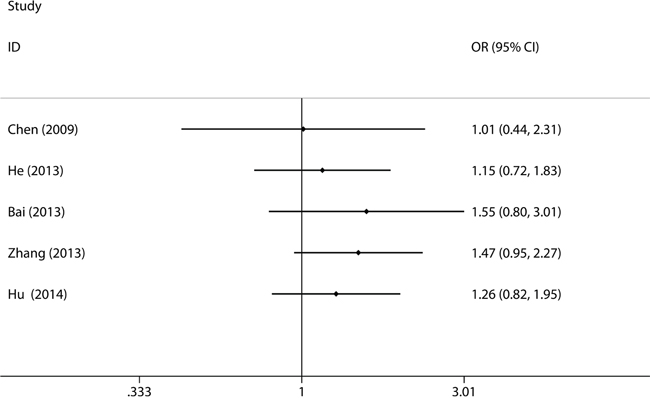 Some potential limitations in this meta-analysis should be noted when interpreting our findings. Firstly, although the sample size of our study was relatively large by collecting all enrolled studies, the statistical power was still limited in the stratified analyses because of the relatively small sample sizes. Some of the findings in stratified analyses may have been undervalued, because only one trial was available for analyses. Many important confounding factors were not taken into account in the stratified analyses, such as age, gender, ethnicities, cancer pathology types, cancer stage, cancer history, smoking habit, specific anti-cancer drugs, treatment regimens and test methods. These factors could contribute to the clinical outcomes of cancer patients. However, few of included studies provided sufficient data for stratified analyses, thus making such stratified analyses impossible. Secondly, some significant heterogeneity between studies did observed. However, this heterogeneity was not significantly change the main conclusions, because our findings reflected the most current state of this issue in published studies. Our analyses were based on unadjusted estimates, since not all published studies calculating adjusted estimates. Thirdly, all of included studies were performed in Asians (Chinese), excepting one study in Caucasian populations (Whites and African Americans). Fourthly, only published studies in Chinese and English were included, published studies in other languages, ongoing studies and unpublished data were not obtained. These may have caused some biases in our estimates. Therefore, to make the result more accurate and reliable, further studies should avoid these pitfalls.

The inclusion criteria were as follows: (1). All patients diagnosed with cancer should be histologically confirmed; (2). XPG rs2296147T>C polymorphism should be genotyped; (3). Treatments and clinical outcomes (i.e., ORR, OS, PFS) should be reported; (4). Sufficient data should be provided to estimate relative risks (i.e., ORs and HRs with corresponding to 95% CIs) for prognostic effects of cancer patients; (5). Only full-text articles were enrolled. The exclusion criteria were utilized to exclude the literatures: (1). Abstracts, letters, comments, reviews and meta-analysis; (2). Duplicated studies; (3). Not reported sufficient data; (4). The corresponding authors were not provided the relevant information upon our request.

We performed this meta-analysis according to the PRISMA guidelines (Figure S1 and Table S1) [30]. The ORR, OS, PFS, ORs, HRs with corresponding to 95% CIs were extracted from the included articles. The ORs and 95% CIs were calculated for the objective response vs. no response after treatment (complete response (CR) + partial response (PR) vs. progressive disease (PD) + stable disease (SD)). The HRs with corresponding to 95% CIs of OS and PFS were evaluated from the raw data of enrolled studies. We evaluated the association between XPG rs2296147T>C polymorphism and clinical outcomes of cancer patients by pooled ORs/HRs with corresponding to 95% CIs under different genetic models (TT vs. CC, CT vs. CC, TT+CT vs. CC, TT vs. CT+CC, T vs. C, CC+CT vs. TT). Then, we conducted the stratification analyses by cancer type. The significance of pooled ORs/HRs was assessed by the Z-test. The between-study heterogeneity was assessed with the Cochran’s chi-square-based Q-test [31, 32] and I2 index [33]. The P-value > 0.10 and/or I2 index < 50% indicates no significant heterogeneity between studies [34], so the pooled ORs/HRs were evaluated using the fixed-effects model (the Mantel-Haenszel method) [35]. Otherwise, the random-effects model with the DerSimonian and Laird method was utilized [36]. The potential publication bias was investigated by the inverted funnel plots and Begg’s test [37]. The sensitivity analysis was examined by changing the effect models and excluding each study to recalculate the ORs/HRs and 95% CIs. To sort out the time-tendency of clinical outcomes of cancer patients, we conducted a sequential year-to-year cumulative meta-analyses. All statistical analyses were carried out with the STATA software version 11.0 (STATA Corporation, College Station, TX, USA). All P-values were two-sided test with a significant level of P < 0.05.

20. Deng N. Correlation between polymorphisms of ERCC5 and risk of gastric cancer and prognosis and the effect on expression of ERCC5 encoding protein XPG. Chinese Medical University. 2014; Doctoral thesis.

35. Mantel N, Haenszel W. Statistical aspects of the analysis of data from retrospective studies of disease. JNCI-Journal of the National Cancer Institute. 1959; 22: 719-748.