Renal cell carcinoma (RCC) is the most common malignant cancer in the kidney, accounting for 2% to 3% of all adult malignancies [1], and clear cell renal cell carcinoma (ccRCC) is the most common histological subtype, responsible for most deaths. There are approximately 16.6 women and 37.7 men diagnosed with RCC per 100,000 people every year in China [2]. The natural history of renal cell carcinoma is very complicated and about 20-40% patients would develop recurrences or metastasis even after undergoing curative nephrectomy [3]. Currently, TNM stage, Fuhrman grade and several integrated models like University of California Integrated Staging System (UISS), and Mayo Clinic stage, size, grade and necrosis (SSIGN) score are being used to predict the clinical outcome of RCC. However, these models may not be enough due to the genetic complexity and heterogeneity of the disease [4]. A more accurate prediction model is needed and combining some important molecular biomarkers with current models is probably a new and effective way.

The c-type lectin-like receptor 2 (CLEC-2) known as an emerging pattern recognition receptors for the activation of innate immunity, is a type II membrane protein with a c-type lectin like domain and a single hemITAM motif. CLEC-2 was first identified in a bioinformatic screen in search of c-type lectin receptors and CLEC-2 mRNA was found in the liver and myeloid cells including monocytes, dendritic cells, NK cells, and granulocytes [5]. CLEC-2 signaling modulates toll-like receptor agonists and promotes induction of IL-10 [6]. Later on after systematically analyzing, CLEC-2 was recognized as a platelet activating receptor for the snake venom toxin rhodocytin inducing platelet aggregation. CLEC-2 also possesses an endogenous ligand, the mucin-like glycoprotein podoplanin found on lymphatic endothelium, stromal of secondary lymphoid organs and some cancer cells [7]. Ligation of CLEC-2 with podoplanin elicits strong platelet activation, and it is identified that platelet activation is known to promote tumor metastasis, which may be triggered by podoplanin up-regulation [8]. All these evidence suggests a potential role of CLEC-2 in cancer immunomodulation and metastasis. 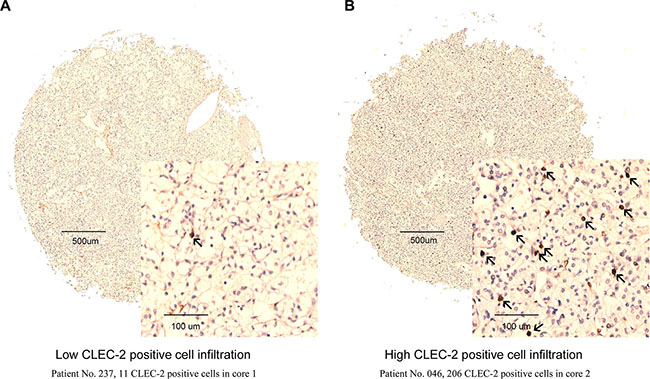 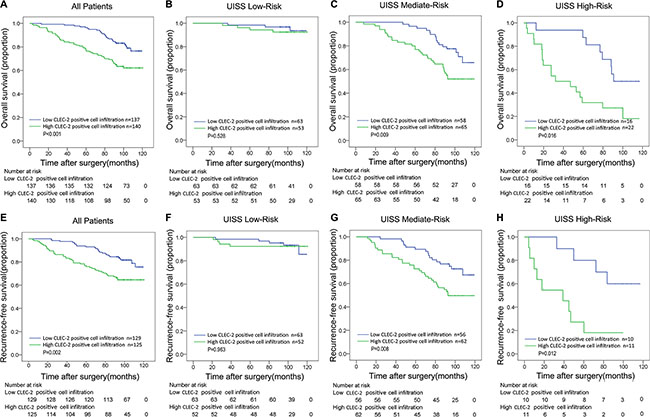 Table 2: Comparison of the predictive accuracy of the prognostic models

Prognostic nomograms for OS and RFS

After incorporating significant prognostic factors concluded from Cox multivariate analyses, we established two nomograms to predict 5-year and 8-year ccRCC patients’ OS and RFS (Figure 3). Pathological T stage, distant metastasis, Fuhrman grade, necrosis status, ECOG PS and CLEC-2 positive cell infiltration were included. A score was assigned to each level of the variables, and the total score could be used to predict the probability of survival. After performing Bootstrap validations we found that the calibration plots showed good consistency between the predicted and actual observation (Figure 3B, 3C; Figure 3E, 3F). The C-index indicated a good predictive accuracy for nomograms in both OS and RFS (OS, C-index 0.813; RFS, C-index 0.716). 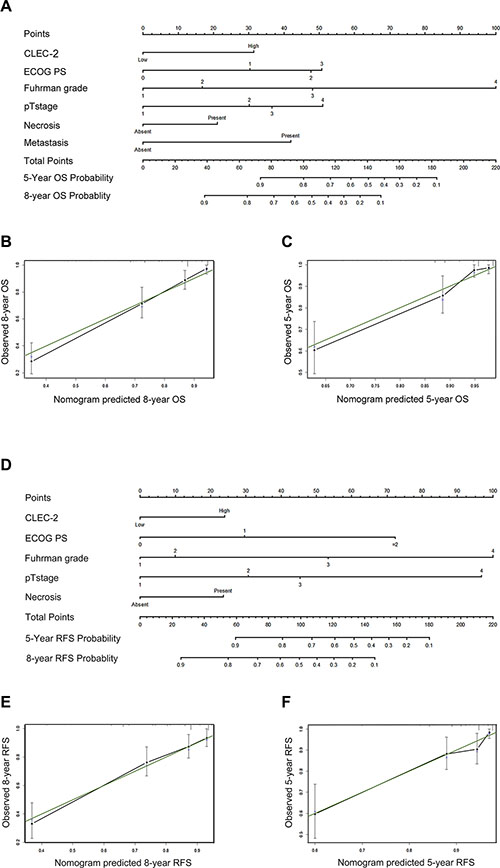 In this study, the CLEC-2 positive staining was mainly found in tumor stromal cells and it is known that CLEC-2 is mainly expressed on myeloid cells. Some myeloid cells like tumor associated macrophages (TAMs), neutrophils and myeloid-derived suppressor cells (MDSC) could help tumor angiogenesis, invasion, metastasis, and meditate certain immune-suppressive function under specific circumstances. This indicated that those CLEC-2 positive cells in this study might have a role inimmunomodulation and help cancer immunologic escape [6, 9]. According to previous studies, CLEC-2 positive cells could mediate tumor progression mainly in two ways, suppressive immunoregulation and platelet activation. Diego Mourão-Sa et al. found that CLEC-2 could signal via Syk, Ca21 and NFAT, leading to Syk phosphorylation, calcium signaling and NFAT activation in myeloid cells. Notably, by activating NFAT, CLEC-2 can modulate the effect of signals induced by other innate receptors such as toll-like receptors, resulting in selectively increased production of cytokine IL-10 [6]. The strong immune suppressive effects of IL-10 might indicate a role for CLEC-2 positive myeloid cells in immune suppression and tumor progression [10]. Different from other CLRs, receptor crosslinking by anti-CLEC-2 mAb was unable to activate CARD9/NF-κB pathway pathway, which is an important downstream signal of CLRs in inducing pro-inflammatory response [11, 12]. Thus CLEC-2 activation cannot increase serum levels of some pro-inflammatory cytokines like TNF, IL-6, IL1b, IL-1a or IL-12/IL-23p40, which might further prove its immune suppressive role. Therefore, ligation of CLEC-2 might promote cancer progression by creating an immunosuppressive environment and help cancer cell escape from immune surveillance.

On the other hand, CLEC-2 ligation with podoplanin could elicit strong platelets activation [7], which protects them from shear stress and NK cells in the blood stream and serves for tumor cell nestling [13]. Activated platelets release growth factors, promoting tumor angiogenesis and growth. The endogenous ligand of CLEC-2, podoplanin, could increase tumor cells motility by remodeling actin in the cytoskeleton and correlated with the onset of epithelial to mensenchymal transition (EMT), a key role in tumor metastasis [14, 15]. Interaction between podoplanin and CLEC-2 may regulate tumor invasion and metastasis and might be a potential target for therapy of metastasis.

In conclusion, we have identified that CLEC-2 positive cell infiltration correlates with ccRCC patients’ survival and can be used as a novel prognostic factor in predicting patients OS and RFS. However, there are still some limitations. This is a retrospective study in nature and the number of patients enrolled is limited. Besides, CLEC-2 may be expressed in varying amounts in different areas of the tumor and the way we chose cutoff point with X-tile might lead to potential overfitting bias. A mutli-centered prospective external validation is needed. Moreover, further experimental studies are also required to identify the detailed role of CLEC-2 positive cells in ccRCC.

The study included a total of 277 patients who received radical or partial nephrectomy due to clear cell RCC in Zhongshan Hospital, Fudan University from Jan 2005 to Jun 2007. All the patients were consecutively included if they met the criterion of having pathologically proven ccRCC, having received partial or radical nephrectomy and possessing available Formalin Fixed Paraffin Embedded (FFPE) specimen of tumor mass (≥ 1 cm3). Patients were excluded if they had other malignant tumor before, or histories of adjuvant or neo-adjuvant therapies including targeted therapies. Samples with over 80% necrotic or hemorrhagic area and patients with bilateral tumors were also excluded. Fudan University, Zhongshan Hospital research medical ethics committee approved this study and informed consent was given for the use of clinical specimens in this study.

The primary outcome was OS, which was calculated from the time of operation to the time of death. RFS was defined as the time from nephrectomy to the time of first recurrence. During the first five years, the interval of follow up was three months and one year later then. Data were censored when the patient died or was alive at Jan 30, 2015, the last follow up time. The analysis of recurrence-free survival excluded fifteen patients with metastasis at surgery and eight patients with missing recurrence state.

Baseline clinical characteristics and complete follow-up outcome included in the database were re-examined. Two pathologists (Yuan J. and Jun H.) reviewed the H&E slides to reconfirm histological subtype, stage, and Fuhrman grade. One urologist reassessed all the MRI and CT scans. Histological subtype of ccRCC were reconfirmed according to 2014 EAU guidelines [16]. TNM stage and Fuhrman grade were based on the 2010 AJCC TNM classification and 2012 ISUP consensus, respectively [17, 18]. Patient risks are stratified according to the SSIGN, UISS and SSIGN localized (Leibovich) score according to original scoring algorithm [19–21].

Tissue microarrays were constructed as previously described [22]. This was a different cohort but we used the same method. Immunohistochemical staining was performed on tissue microarrays and primary antibodies against human CLEC-2 (Anti-CLEC-2 antibody, orbr3344, Biobirt, diluted 1/100) was used. Antibody specificity was confirmed by immunochemistry and western blot. The staining results were scanned by a microscopy system (Leica DM6000 B, Leica Microsystems GmbH, Mannheim, Germany). We recorded images with Leica CV-M2CL camera and analyzed them with Leica Ariol 4.0 software. Specimens were considered as high CLEC-2 positive cell infiltration if there were over 53 CLEC-2 positive cells in a tissue core, otherwise low CLEC-2 positive cell infiltration. Each patient had two tissue cores, and the number of CLEC-2 positive cells calculated as the average of them. The cutoff point was selected according to optimal p value with X-tile, version 3.6.1 (Yale University, New Haven, Connecticut) [23].

Y. Xiong for acquisition of data, analysis and interpretation of data, statistical analysis and drafting of the manuscript; L. Liu, Y. Xia, J. Wang, W. Xi, Q. Bai,Y. Qu and Q. Long for technical and material support; J. Xu and J. Guo for study concept and design, analysis and interpretation of data, drafting of the manuscript, obtained funding and study supervision. All authors read and approved the final manuscript. The authors would like to thank Dr. Yuan Ji, Dr. Jun Hou and Ms. Haiying Zeng (Department of Pathology, Zhongshan Hospital of Fudan University) for diagnosis confirmation and technical assistance, respectively.