Eupafolin, a flavone found in Artemisia princeps, has been reported for its anti-tumor activity in several cancer cells. In this study, we examined whether eupafolin could sensitize TRAIL-mediated apoptosis in human renal carcinoma Caki cells. We found that eupafolin alone and TRAIL alone had no effect on apoptosis. However, combined treatment with eupafolin and TRAIL markedly induced apoptosis in human renal carcinoma (Caki) cells, glioma cells (U251MG), and prostate cancer cells (DU145), but not normal cells [mesangial cells (MC) and normal mouse kidney cells (TCMK-1)]. Eupafolin induced down-regulation of Mcl-1 expression at the post-translational levels in cathepsin S-dependent manner, and over-expression of Mcl-1 markedly blocked apoptosis induced by combined treatment with eupafolin and TRAIL. In addition, eupafolin increased Bim expression at the post-translational levels via AMP-activated protein kinase (AMPK)-mediated inhibition of proteasome activity. Knock-down of Bim expression by siRNA inhibited eupafolin plus TRAIL-induced apoptosis. Furthermore, combined treatment with eupafolin and TRAIL reduced tumor growth in xenograft models. Taken together, these results suggest that eupafolin enhanced TRAIL-mediated apoptosis via down-regulation of Mcl-1 and up-regulation of Bim in renal carcinoma Caki cells.

Eupafolin (6-methoxy 5, 7, 30, 40-tetrahydroxyflavone) is a flavone extracted from the Artemisia princeps. It has been widely used by Chinese or native Indians as traditional medicine [1]. Eupafolin exhibits multiple functions including anti-inflammatory, anti-oxidant and anti-proliferative effects [2–5]. Recently, it has been reported that eupafolin induces apoptosis in human cervical adenocarcinoma cells through induction of mitochondrial membrane depolarization [3]. Eupafolin suppresses proliferation and growth of prostate cancer cells through inhibition of PI3K activity [4]. Molecular mechanisms underlying the anti-cancer effects of eupafolin can be associated with activation of caspase [3], down-regulation of anti-apoptotic proteins [3] and the inhibition of Akt signaling pathway [4]. However, the exact mechanism of anti-cancer effect of eupafolin remains elusive.

Tumor necrosis factor-related apoptosis-inducing ligand (TRAIL) is the member of the TNF ligand family, and it has been shown to be effective in inducing apoptosis in variety tumor cells, but not normal cells [6, 7]. Binding of TRAIL to death receptor (DR) 4 and 5, allows the recruitment of FADD and caspase-8, which results in the formation of the death-inducing signal complex (DISC) [8]. In addition, TRAIL also triggers the mitochondrial apoptotic pathway through disruption of the mitochondrial membrane permeability resulting in the releases of cytochrome c into the cytosol [9]. Although TRAIL selectively induces cancer cell death, the down-regulation of pro-apoptotic proteins and death receptors and up-regulation of anti-apoptotic proteins such as c-FLIP, Bcl-2, Bcl-xL and inhibitor of apoptosis proteins (IAPs) lead to resistance to TRAIL-induced apoptosis [10–14]. Therefore, there are several limitations to using the TRAIL or the TRAIL receptor antibody. The short half-life of human soluble TRAIL, inherent TRAIL resistance and acquired TRAIL resistance by repeated TRAIL exposure are considered to be the limitation factors. Therefore, identification of TRAIL sensitizers is needed to overcome the hurdle of TRAIL resistance.

In this present study, we investigated whether the TRAIL resistance in cancer cells could be overcome by combination treatment with eupafolin and TRAIL. Moreover, the molecular mechanisms underlying eupafolin plus TRAIL-induced apoptosis was further investigated. 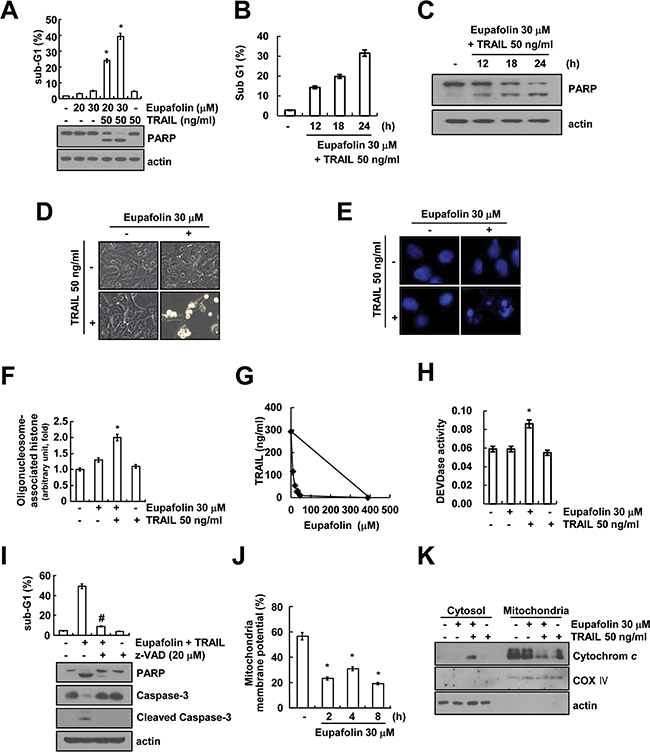 Effects of eupafolin on expression levels of apoptosis-related proteins

Figure 2: Effects of eupafolin on expression levels of apoptosis-related proteins. Caki cells were treated with the indicated concentrations of eupafolin for 24 h. The protein levels of Mcl-1, Bcl-xL, Bcl-2, Bim, Bax, DR5, FADD, c-FLIP, cIAP1, cIAP2, XIAP, and actin were determined by Western blotting. The level of actin was used as a loading control. 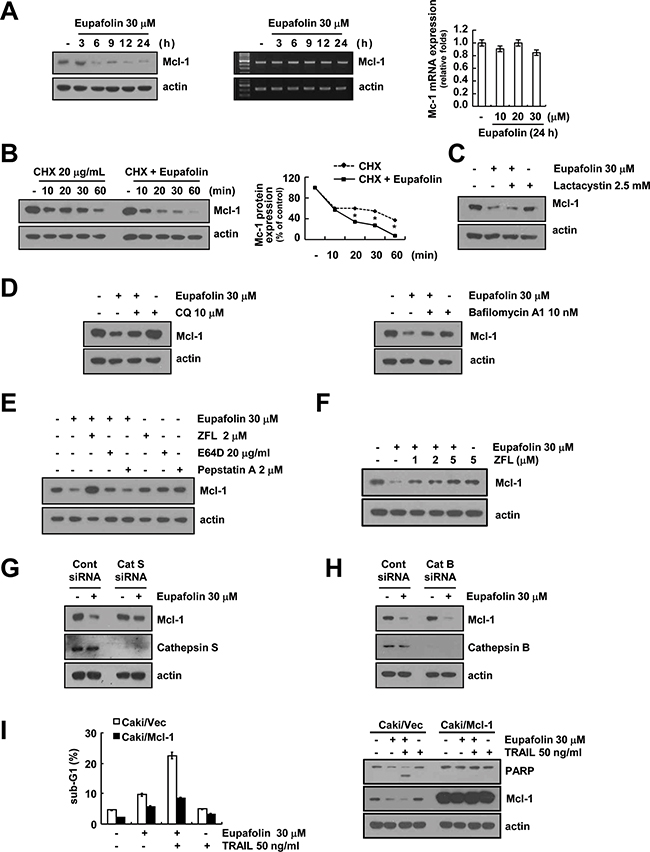 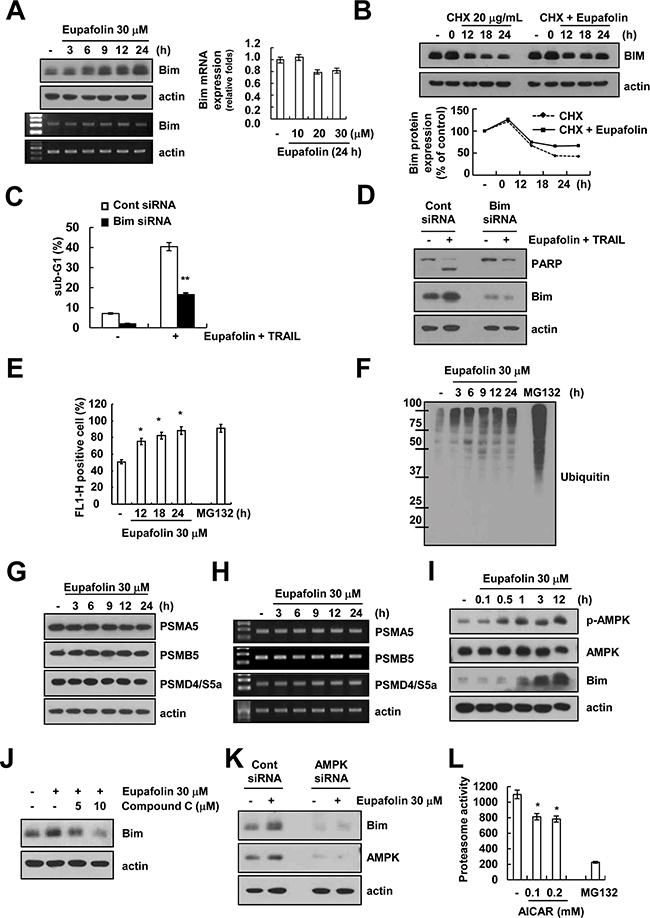 Eupafolin sensitizes to other cancer cells to TRAIL-mediated apoptosis, but not normal cells

Next, we investigated whether eupafolin and TRAIL could enhance apoptosis in other cancer cells and normal cells. As shown in Figure 5A, we found that combined treatment with eupafolin and TRAIL enhanced the sub-G1 population and PARP cleavage in U251MG (glioma cells) and DU145 cells (prostate cancer cells). Furthermore, eupafolin induced down-regulation of Mcl-1 expression in both cells. However, up-regulation of Bim expression was detected in DU145 cells, but not U251MG cells (Figure 5A). In contrast, eupafolin plus TRAIL had no effect on apoptosis in human mesangial cells (MC) and mouse renal tubular epithelial (TCMK-1) cells (Figure 5B). Interestingly, eupafolin did not change expression levels of Mcl-1 and Bim protein in both normal cells (Figure 5C). These data indicate that eupafolin induces TRAIL-mediated apoptosis in cancer cells, but not in normal cells. 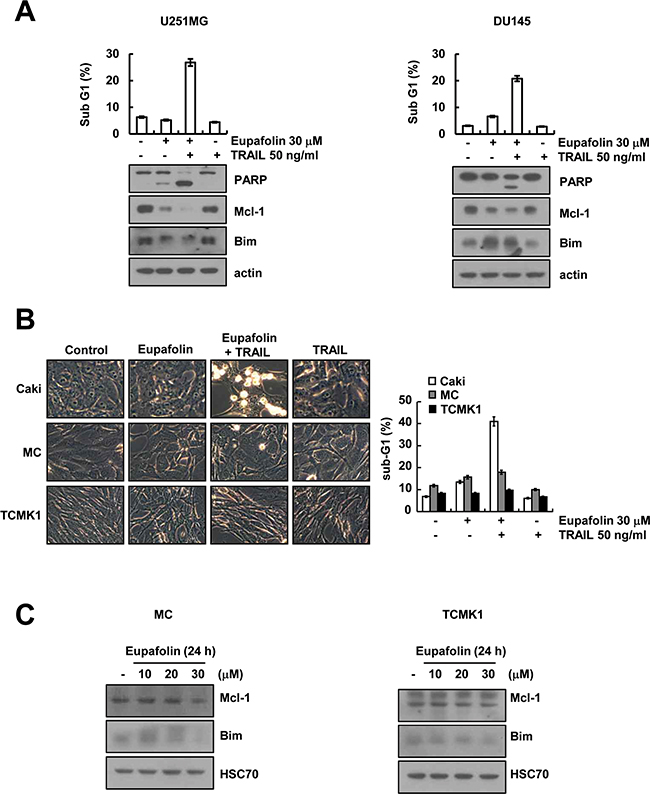 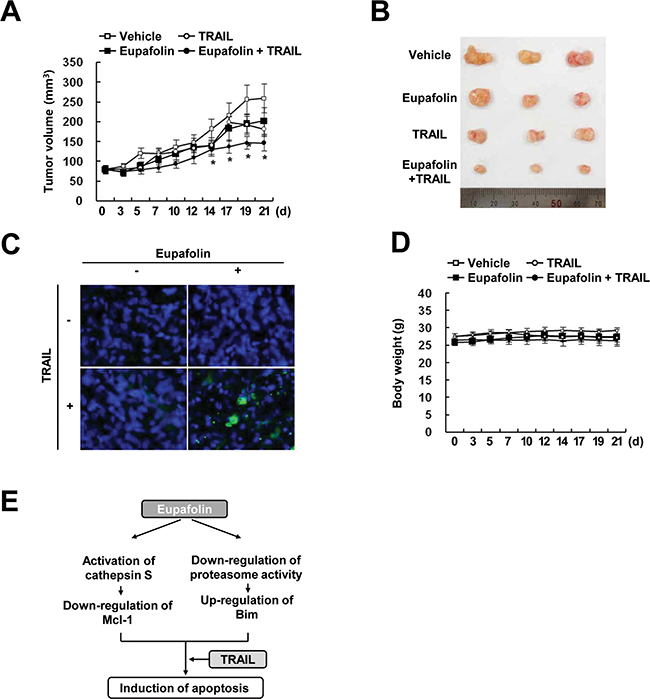 Figure 6: Tumor growth in vivo is reduced by the combined treatment with eupafolin and TRAIL. Nude mice were subcutaneously inoculated with Caki cells. Tumor volume was monitored during the following treatments: vehicle, eupafolin (10 mg/kg; i.p.), GST-TRAIL (3 mg/kg, i.p.), or eupafolin plus TRAIL for 21 days. A. The graph shows changes in the tumor volume. Number of animals per group = 7. Data are means ± SE (n=7). * p < 0.05 compared to vehicle. B. The size of the dissected-out tumors is shown. C. Representative images of tumors sections that were analyzed by TUNEL assay. Nuclear staining was performed with DAPI. D. Bodyweight changes during the experiment. E. Schematic models of eupafolin-mediated TRAIL sensitization.

In this study, we demonstrated that eupafolin sensitizes TRAIL-mediated apoptosis in cancer cells. Eupafolin induced down-regulation of Mcl-1 expression in a cathepsin S-dependent manner. In addition, we found that eupafolin markedly induced Bim expression through AMPK-dependent inhibition of proteasome activity (Figure 6E). Furthermore, combined treatment with eupafolin and TRAIL reduced the tumor volume and increased apoptosis in a xenograft model. Therefore, these data suggest that eupafolin could be an effective TRAIL sensitizer.

Collectively, these findings suggest that eupafolin sensitizes TRAIL-mediated apoptosis through the down-regulation of Mcl-1 expression and up-regulation of Bim expression in the human renal Caki cells. Therefore, eupafolin could be an attractive sensitizer for TRAIL resistance cancer cells.

For flow cytometry, the cells were resuspended in 100 μL of phosphate-buffered saline (PBS), and 200 μL of 95% ethanol was added while the cells were being vortexed. Then, the cells were incubated at 4°C for 1 h, washed with PBS, resuspended in 250 μL of 1.12% sodium citrate buffer (pH 8.4) with 12.5 μg of RNase and incubated for an additional 30 min at 37°C. The cellular DNA was then stained by adding 250 μL of a propidium iodide solution (50 μg/mL) to the cells for 30 min at room temperature. The stained cells were analyzed by fluorescent-activated cell sorting on a FACS can flow cytometer to determine the relative DNA content, which was based on the red fluorescence intensity.

Cells were washed with cold PBS and lysed on ice in 50 μL of lysis buffer (50 mM Tris–HCl, 1 mM EGTA, 1% Triton X-100, 1 mM phenylmethylsulfonyl fluoride, pH 7.5). Lysates were centrifuged at 10,000 g for 15 min at 4°C, and the supernatant fractions were collected. Proteins were separated by SDS–PAGE and transferred to an Immobilon-P membrane. Specific proteins were detected using an enhanced chemiluminescence (ECL) Western blot kit according to the manufacturer’s instructions.

To examine cellular nuclei, the cells were fixed with 1% paraformaldehyde on glass slides for 30 min at room temperature. After the fixation, the cells were washed with PBS and a 300 nM 4’, 6’-diamidino-2-phenylindole solution (Roche, Mannheim, Germany) was added to the fixed cells for 5 min. After the nuclei were stained, the cells were examined by fluorescence microscopy.

The cell death detection ELISA plus kit (Boehringer Mannheim, Indianapolis, IN, USA) was used for assessing apoptotic activity by detecting fragmented DNA within the nucleus in eupafolin alone, TRAIL alone, and combination with eupafolin and TRAIL-treated cells. Briefly, each culture plate was centrifuged for 10 min at 200 g, the supernatant was removed, and the pellet was lysed for 30 min. After centrifuging the plate again at 200 g for 10 min, and the supernatant that contained the cytoplasmic histone-associated DNA fragments was collected and incubated with an immobilized anti-histone antibody. The reaction products were incubated with a peroxidase substrate for 5 min and measured by spectrophotometry at 405 and 490 nm (reference wavelength) with a microplate reader. The signals in the wells containing the substrate alone were subtracted as the background.

To evaluate DEVDase activity, cell lysates were prepared after their respective treatments with TRAIL in the presence or absence of eupafolin. Assays were performed in 96-well microtiter plates by incubating 20 μg of cell lysates in 100 μL of reaction buffer (1% NP-40, 20 mM Tris-HCl, pH 7.5, 137 mM NaCl, 10% glycerol) containing a caspase substrate [Asp-Glu-Val-Asp-chromophore-p-nitroanilide (DVAD-pNA)] at 5 μM. Lysates were incubated at 37°C for 2 h. Thereafter, the absorbance at 405 nm was measured with a spectrophotometer.

Determination for the mitochondrial membrane potential by rhodamine 123

Rhodamine 123 (Molecular Probes Inc., Eugene, OR, USA) uptake by mitochondria is directly proportional to its membrane potential. After treatment, cells were incubated with rhodamine 123 (5 μM) for 5 min in the dark at 37°C. The cells were harvested and suspended in PBS. The mitochondrial membrane potential was subsequently analyzed using a flow cytometer (Becton–Dickinson, Franklin Lakes, NJ, USA).

The cells were harvested, washed once with ice-cold PBS and gently lysed for 2 min in 80 μL ice-cold lysis buffer [250 mM sucrose, 1 mM EDTA, 20 mM Tris–HCl (pH 7.2), 1 mM DTT, 10 mM KCl, 1.5 mM MgCl2, 5 μg/mL pepstatin A, 10 μg/mL leupeptin and 2 μg/mL aprotinin]. Lysates were centrifuged at 12,000 g at 4°C for 10 min to obtain the supernatants (cytosolic extracts free of mitochondria) and the pellets (fraction that contains mitochondria). The resulting cytosolic fractions were used for Western blot analysis with an anti-cytochrome c antibody.

The Caki cells were transfected in a stable manner with the pFLAG-CMV4/Mcl-1 plasmid or control plasmid pcDNA 3.1 vector using Lipofectamine2000 as prescribed by the manufacturer (Invitrogen, Carlsbad, CA). After 48 h of incubation, transfected cells were selected in primary cell culture medium containing 700 μg/mL G418 (Invitrogen, Carlsbad, CA). After 2 or 3 weeks, single independent clones were randomly isolated, and each individual clone was plated separately. After clonal expansion, cells from each independent clone were tested for Mcl-1 expression by immunoblotting.

Male BALB/c-nude mice, aged 5 weeks, were purchased from the Central Lab Animal Inc. (Seoul, Korea). All the mice were allowed 1 week to acclimatize to the surroundings before the experiments, and were kept at 25 ± 2°C, with a relative humidity of 55 ± 5% and a 12 h light–dark cycle. The study protocol was approved by the IRB Keimyung University Ethics Committee (KM-2013-82).

Each mouse was subcutaneously (s.c.) injected on each flank with Caki cells (2 × 106). After tumors had grown after approximately 2 weeks, 28 mice were randomly divided in to four treatment groups: (1) vehicle alone, (2) eupafolin alone, (3) GST-TRAIL alone, and (4) eupafolin plus GST-TRAIL. Eupafolin and GST-TRAIL were administered at 10 mg/kg and 3 mg/kg, respectively. Eupafolin and GST-TRIAL were prepared in PBS (pH 7.4). The mice received an intraperitoneal (i.p.) injection of eupafolin and GST-TRAIL. Treatment was administered three times a week for 3 weeks. The tumor size was measured three times a week using a Vernier’s caliper (Mytutoyo Co., Tokyo, Japan) to measure two perpendicular diameters, and the tumor size was calculated using the equation (length × width2)/2. The animals were sacrificed by cervical dislocation, and the tumors were collected for histological analysis. The tumors were fixed in 30% formalin, embedded in OCT compound (Miles Inc., Elkhart, IN, USA) and cut into 20-μm sections using a cryostat (SLEE International Inc., duarte, CA, USA).

12. Ng CP, Zisman A, Bonavida B. Synergy is achieved by complementation with Apo2L/TRAIL and actinomycin D in Apo2L/TRAIL-mediated apoptosis of prostate cancer cells: role of XIAP in resistance. Prostate. 2002; 53: 286-99.