6The Cancer Registry of Norway, NO-0379 Oslo, Norway

Knowledge on the role of genetic polymorphisms in the etiology of pediatric brain tumors (PBTs) is limited. Therefore, we investigated the association between single nucleotide polymorphisms (SNPs), identified by candidate gene-association studies on adult brain tumors, and PBT risk.

The study is based on the largest series of PBT cases to date. Saliva DNA from 245 cases and 489 controls, aged 7–19 years at diagnosis/reference date, was genotyped for 68 SNPs. Data were analyzed using unconditional logistic regression.

Brain tumors are the most common pediatric solid tumors and the leading cause of cancer mortality in children. High-dose ionizing radiation and rare inherited syndromes are the only established risk factors for brain tumors, causing a small proportion of cases [1]. Thus, brain tumors are considered as multifactorial disorders resulting from progressive accumulation of genetic and epigenetic alterations in concert with environmental exposures. It has been suggested that genetic polymorphisms in four main pathways including DNA repair, cell cycle, metabolism, and inflammation play an important role in brain carcinogenesis [2]. Therefore, candidate gene-association studies of adult brain tumors have mainly focused on these four hypothesized pathways to identify genetic susceptibility factors for adult brain tumors [3–9].

Whereas a considerable number of candidate gene-association studies are available on adult brain tumors, very few and small genetic studies have been performed on brain tumors in children and adolescents [10–13], due to difficulties in collecting a sufficient number of DNA samples. Hence, the role of genetic polymorphisms in pediatric brain tumor (PBT) etiology is largely unknown. However, some studies have found similar genetic mutation patterns for adult and pediatric brain tumor progression within specific histological types [14–18]. These similarities in prognostic factors provide an important starting point for identifying candidate genetic risk factors for PBTs; that might be similar to those involved in adult brain tumorigenesis [19]. Moreover, in our previous genetic association study of PBT risk, we concluded that single nucleotide polymorphisms (SNPs) identified by genome-wide association studies (GWAS) on adult glioma might also be associated with the risk of brain tumors in children [20].

The aim of this study, which represents the largest series of PBT cases to date, was to determine whether the SNPs identified by candidate gene-association studies on adult brain tumors, involved in the four main pathways discussed above, are also related to pediatric brain tumor risk.

Table 1: Characteristics of cases and controls

a: Restricted to ICD-O-3 location C71, subclassified according to WHO histological subclassification, 2007; patients with neurofibromatosis and tuberous sclerosis were excluded. 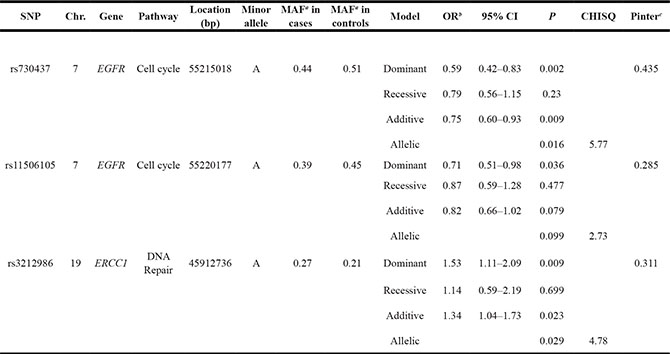 a: MAF=Minor Allele Frequency b: OR adjusted for age, sex, and country c: P value for interactions between SNPs and demographic variables including age, sex and country. 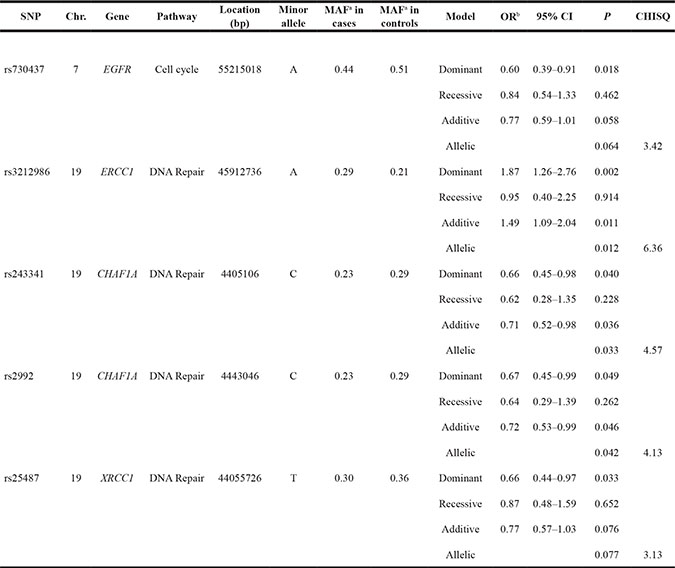 a: MAF=Minor Allele Frequency b: OR adjusted for age, sex, and country. 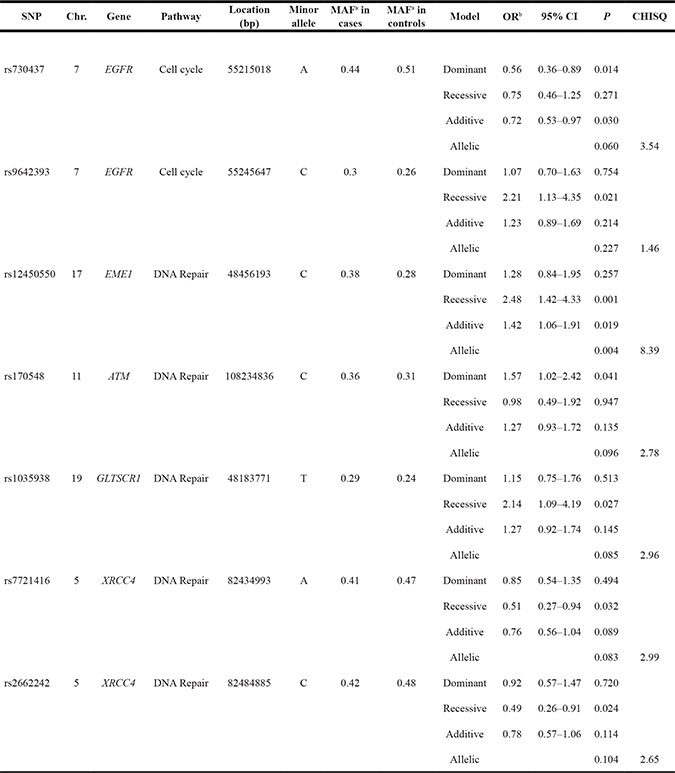 a: MAF=Minor Allele Frequency b: OR adjusted for age, sex, and country.

a: Odds ratio for haplotype compared with all other haplotypes adjusted for age, sex, and country.

As described above, 248 testing procedures were performed. When the Bonferroni correction is applied, the reference p value is 0.0002 for an experiment-wide significance level of 0.05, and 0.0004 for a significance level of 0.10; none of the reported associations met these limits. As summarized in Table S4, no significant SNP-SNP interactions were observed (p < 0.001).

Genetic and epigenetic aberrations involved in cell cycle and DNA repair pathways have been proposed to play a role in PBT pathogenesis and progression [21–25]. Overexpression of the epidermal growth factor receptor (EGFR), which plays an important role in cell growth and development through the cell cycle pathway, is shown to be common and correlated with tumor grade in pediatric brain tumors [26, 27] . The function of genetic variants of EGFR is still unclear; however, intronic variations of EGFR found in this study may affect EGFR expression and play a role in pediatric brain tumorigenesis.

DNA repair is an important mechanism to maintain genomic stability and its functional failure may lead to carcinogenesis. Somatic variations of DNA repair genes have been identified in PBTs [28–30]; however, no study has investigated the role of DNA repair gene variations in PBT etiology. In this study, we examined the association between PBT risk and 37 SNPs in 17 DNA repair genes, shown to be associated with risk of adult brain tumors. Of these, 9 SNPs in 7 DNA repair genes (ERCC1, CHAF1A, XRCC1,EME1, ATM, GLTSCR1, and XRCC4) were also associated with susceptibility to PBTs. A few studies have previously indicated that DNA repair gene alterations may increase the predisposition to cancer formation in children [31, 32]. Moreover, these variations might predict the tumor drug sensitivity and the treatment outcome [33].

The ERCC1 gene encodes excision repair cross-complementing group 1 which is involved in DNA nucleotide excision repair (NER) pathway [34]. The result of association between the A allele of ERCC1 rs3212986 and increased risk of PBTs is in line with our finding in a meta-analysis of this polymorphism in adult brain tumors [3]. XRCC1 which encodes an enzyme named X-ray cross-complementing group 1, plays an important role in base excision repair pathway (BER) [35]. Chromatin assembly factor 1, subunit A (CHAF1A) is involved in DNA mismatch repair (MMR) during the correction of DNA replication errors [36]. XRCC4 encodes X-ray repair complementing defective repair in Chinese hamster cells 4 that functions in the repair of DNA double-strand breaks (DSBs) produced by ionizing radiation and restriction enzymes [37].

EME1 encodes essential meiotic structure-specific endonuclease 1 which forms an endonuclease complex with methyl methanesulfonate-sensitive UV-sensitive 81 protein (MUS81) and plays an important role in DNA repair and maintaining of genome integrity [38]. ATM encodes a protein kinase which is a member of phosphatidyl inositol 3-kinase-like kinase (PIKK) family. ATM is a key regulator of cell cycle checkpoint signaling pathways which responds to DNA strand breaks by inducing cell-cycle arrest and hence facilitates DNA repair [39]. GLTSCR1 stands for glioma tumor suppressor candidate region 1 and GLTSCR1 rs1035938 polymorphism alters a CpG site within the 5′ CpG island of the gene. This germ-line alteration might affect the transcription of GLTSCR1 and other candi-date genes in the region [40].

The present study was conducted based on the largest series of pediatric brain tumor cases to date with the purpose to investigate the association between genetic polymorphisms along with four main pathways hypothesized to be involved in brain tumorigenesis and PBT risk. Although investigating the effect of environmental risk factors was not the aim of our study, the fact that we did not take into consideration the possible gene-environment interactions is a limitation of this work. Moreover, due to shortage of large enough pediatric patient materials with access to DNA samples, we were not able to replicate our findings. Therefore, additional studies are necessary to validate these results, explore the mechanisms through which these genetic polymorphisms influence cancer susceptibility, and to investigate gene-environment interactions underling risk of PBTs.

Since this study describes the association between genetic variations and risk of pediatric brain tumors, it provides an important starting point for understanding the mechanisms behind the PBT etiology that in turn might lead to identifying clinically meaningful genetic risk and protective factors and eventually cancer prevention and treatment.

This population-based case-control study is based on the Cefalo study, a large international study of brain tumors in children and adolescents conducted in Sweden, Denmark, Norway, and Switzerland. Details of the study methods have been described previously [41]. Briefly, all children aged 7–19 years during the period between 1 April 2004 and 31 August 2008, diagnosed with a primary intracranial brain tumor defined according to the International Classification of Childhood Cancer, third edition (ICCC-3), group III [42], restricted to ICD-O-3 location C71, were considered as case subjects. Cases were subclassified according to the fourth edition of the World Health Organization (WHO) classification of tumors of the central nervous system [43]. Participants with neurofibromatosis or tuberous sclerosis were excluded from analyses. Medulloblastoma cases were excluded here since they will be included in a separate study. Controls were randomly selected from the population registers and matched to the cases by age, sex, and geographic region. A total of 352 (82%) cases and 646 (71%) controls participated in the interviews. The study was approved by the National data protection boards and ethical committees in all participating countries, and written informed consent was obtained from all participants and/or their parents.

Saliva collection and DNA extraction were performed using the Oragene self-collection kit (DNA Genotek, Ottawa, ON, Canada) and the DNA yield was quantitated using PicoGreen (Invitrogen, Carlsbad, CA, USA), according to the standard protocols. This study, in total, included saliva DNA of 245 cases and 489 controls. Distribution of diagnostic subtypes among cases were 134 astrocytoma, 19 ependymoma, 7 intracranial embryonal tumors, 20 other gliomas, 49 other specified intracranial neoplasms, and 16 with unspecified intracranial neoplasms (Table 1).

Selection of candidate SNPs and genotyping

The χ2 goodness-of-fit test was used to examine the consistency of allele frequencies with Hardy-Weinberg equilibrium (HWE) among the controls and p < 0.001 was considered statistically significant. Odds ratios (ORs) and corresponding 95% confidence intervals (CIs) were calculated using unconditional logistic regression modelling to evaluate the association between each SNP and the risk of PBT based on the Cochran–Armitage trend test of additivity (trend) as well as dominant (DOM) and recessive (REC) models, with adjustment for age, sex, and country. We applied the χ2 test to compare the allelic frequencies of the genotyped SNPs between cases and controls as well as the Wald test to evaluate the significance of interactions between SNPs and demographic variables including age, sex and country. SNP-SNP interactions were investigated for pairwise combinations of all the SNPs involved in the same pathway and p < 0.001 was set as the significance level of interaction analyses. Stratified analyses were performed by astrocytoma alone and the other tumor types combined (including ependymoma, intracranial embryonal tumors (except medulloblastoma), other gliomas, other specified intracranial neoplasms, and unspecified intracranial neoplasm); in order to increase the statistical power. To measure the linkage disequilibrium (LD) between the genotyped SNPs, D´ was calculated. Haploblocks were defined based on the default LD block parameters in Haploview v4.2. Haplotype analyses were performed for the haplotype blocks harboring the SNPs that were found to be associated with PBTs. Haplotypes with a frequency > 1% were considered in the blocks with different haplotype distribution between cases and controls (p < 0.1). Although selection of SNPs for the analyses was based on a priori knowledge from candidate gene-association studies on adults, the possibility of false-positive findings was considered by providing the reference p value for an experiment-wide significance with Bonferroni correction (0.0002 for an experiment-wide significance level of 0.05, and 0.0004 for a significance level of 0.10). The analyses were carried out using PLINK v1.07 [50] and SAS statistical software version 9.3 (SAS Institute, Inc., Cary, NC, USA).

We gratefully acknowledge collaboration with and support from clinicians and other hospital staff in all countries, as well as assistance from national and local cancer registers with identification of patients. We also acknowledge the skillful work of the research nurses, interviewers, and research assistants in all countries. Finally, we acknowledge all those with whom we have collaborated previously within the CEFALO study. Please see Aydin et al. for an exhaustive list [41].