Prostatitis is a common disease contributing to 8% of all urologist visits. Yet the etiology and effective treatment remain to be further elucidated. Using a non-obese diabetes mouse model that can be induced by autoimmune response for the spontaneous development of prostatitis, we found that injection of the ASC-J9® at 75 mg/Kg body weight/48 hours led to significantly suppressed prostatitis that was accompanied with reduction of lymphocyte infiltration with reduced CD4+ T cells in prostate. In vitro studies with a co-culture system also confirmed that ASC-J9® treatment could suppress the CD4+ T cell migration to prostate stromal cells. Mechanisms dissection indicated that ASC-J9® can suppress CD4+ T cell migration via decreasing the cytokine CCL2 in vitro and in vivo, and restoring CCL2 could interrupt the ASC-J9® suppressed CD4+ T cell migration. Together, results from in vivo and in vitro studies suggest that ASC-J9® can suppress prostatitis by altering the autoimmune response induced by CD4+ T cell recruitment, and using ASC-J9® may help us to develop a potential new therapy to battle the prostatitis with little side effects.

CP/CPPS accounts for 90%–95% of prostatitis diagnoses [3]. However, the etiology of this type of prostatitis is still poorly understood. It may result from an interplay between psychological factors and dysfunction in the immune, neurological and endocrine systems [4]. An autoimmune basis for CP/CPPS is a prominent theory for the etiology/pathogenesis of CP/CPPS [5]. Animal models, named as experimental autoimmune prostatitis [6], with the characteristic of CD4-positive T cell infiltrates, have been used as standard in vivo models to study the progress of prostatitis.

Markers for cytotoxic T cells are found in the expressed prostatic secretion of men with CP/CPPS, a cell type consistent with autoimmune inflammation [7]. Batstone et al. reported an autoimmune response by looking for T cell proliferation in response to proteins of the seminal plasma (SP) and found SP could increase the T cell proliferation [8]. Ponniah et al. also found that some men with symptoms of chronic prostatitis have evidence of a proliferative CD4-T cell response to prostate specific antigen (PSA) [9].

In the experimental autoimmune prostatitis (EAP) rat model, Morón et al. reported castration could ameliorate the prostatitis symptoms [10], suggesting androgen signaling might play a negative role in developing prostatitis. In the human, the CP/CPPS may be induced by the T cells-induced autoimmune response [8, 9] and the T cells may be linked to alter PSA for the increase cell proliferation.

Here we used the NOD mouse model with spontaneous autoimmune prostatitis [11] to examine the potential roles of androgen receptor (AR), the key regulator of PSA signaling, in the prostatitis that involved the infiltrated T cells. Our results revealed that ASC-J9®, a newly developed AR degradation enhancer that could degrade AR in selective cells with few side effects [12–19], could decrease the prostatitis in the NOD mice and suppress the recruitment of T cells to the prostate stromal cells via alteration of the cytokine CCL2 signals.

8 pairs of 12-weeks-old NOD mouse that spontaneously develop prostatitis [11] were i.p. injected with 75 mg/kg body weight ASC-J9® or vehicle every 48 hrs for 2 weeks. After 2 weeks of injection, the mice rested for 2 weeks before the next round of injection. The injection/resting cycles were continued until 4 pairs were sacrificed at 28 weeks and the other 4 pairs sacrificed at 32 week of age (see diagram in Figure 1A). Prostate tissues mice were then sacrificed and prostate tissues were collected for H&E staining (Figure 1B, top panel). Autoimmune prostatitis is characterized by lymphoma nuclear cell infiltrates in the prostate gland (indicated by the arrow in Figure 1B). Importantly, ASC-J9® treated mice show reduced infiltrating cells compared to vehicle treated mice. To quantify the extent of prostatitis, intra-prostatic infiltrates foci/cross section were counted and results revealed that ASC-J9® treated mice have reduced foci compared to vehicle treated control mice (Figure 1B, bottom panel), suggesting ASC-J9® could reduce prostatitis in this spontaneous autoimmune prostatitis mouse model. 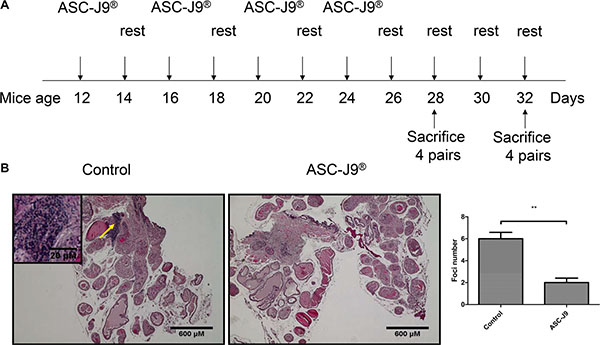 To further confirm above in vivo mice results, we then assayed the CD4+ T cell infiltration to prostate in these NOD mice, as Penna et al. reported the majority of the infiltrating prostatitis cells are CD4+ T cells [11]. As shown in Figure 2, ASC-J9® treated NOD mice have less infiltrating CD4+ T cells compared to the vehicle treated control mice. 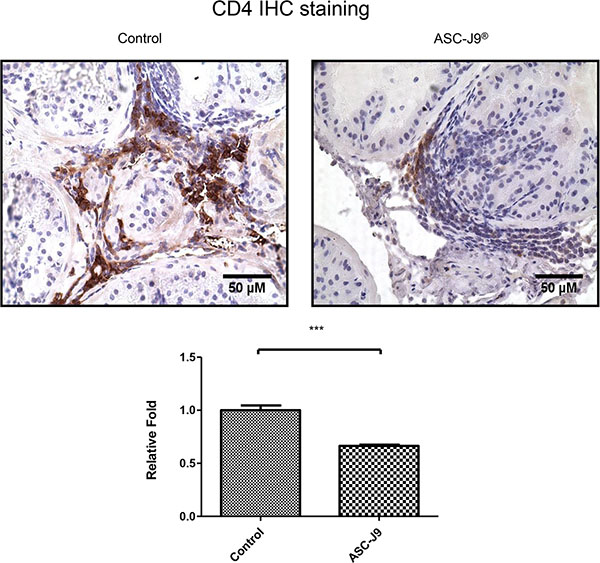 Together, results from Figures 1–2 suggest that ASC-J9® can suppress prostatitis with reduced infiltrated CD4+ T cells in the NOD mouse models.

We then confirmed the above in vivo mice results with in vitro co-culture system using migration assay (Figure 3A, left panel). Both HH CD4+ T cells and WPMY-1 prostate stromal cells were treated with ASC-J9® 24 hours prior to the migration assay. The results revealed that 2.5 μM of ASC-J9® reduced HH CD4+ T cells migration (Figure 3A, right panel). After HH CD4+ T cells migrated to the WPMY-1 cells, treatment with ASC-J9® showed little impact on the WPMY-1 cells, whereas in the control group WPMY-1 cells began to show detachment from the plate (Figure 3B). We also observed ASC-J9® can reduce WPMY-1 growth by comparing Figure 3B pictures. 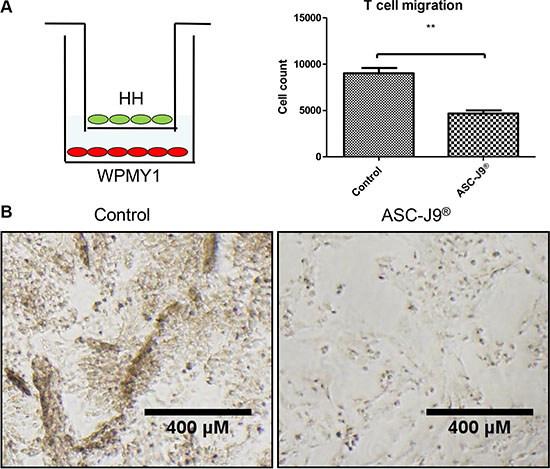 Together, results from above studies suggest that ASC-J9® can suppress infiltrated CD4+ T cells migrating to prostate in both in vitro co-culture system (Figure 3) and in vivo NOD mouse models (Figure 2).

To further dissect the potential mechanism, we then collected the CM from the co-culture system and arrayed the potential different cytokines/chemokines profile. The results revealed that CCL2 together with other 6 cytokines/chemokines were decreased upon ASC-J9® treatment (Figure 4A), suggesting CD4+ T cells migration may be suppressed by ASC-J9® through the reduction of those cytokines/chemokines. Among those altered cytokines, we focused on the CCL2, a key cytokine that can regulate prostate cancer progression yet its expression was suppressed by ASC-J9® [15, 20]. Importantly, early studies also indicated that CCL2 is an essential mediator for the development of prostatitis [21]. 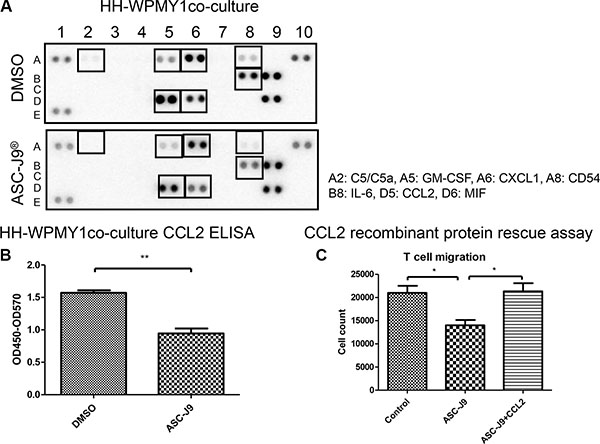 Figure 4: ASC-J9® reduces CD4+ T cell migration to the prostate stromal cell through decrease of cytokine CCL2. (A) Conditioned media (CM) were collected from WPMY-1 + HH with or without 2.5 μM ASC-J9® treatment for 24 h. Relative amounts of cytokine levels were determined using Human Cytokine Array kit. The cytokines affected by ASC-J9® were denoted by boxes and listed at the right. (B) CM collected from co-cultures were also used for detection of CCL2 by human CCL2 ELISA kits. (C) The reduction of CCL2 was restored by adding the recombinant CCL2 to the co-culture system. CD4+ T cell HH (top well) were co-cultured with prostate stroma cell WPMY-1 (bottom well) for the migration assay. The statistic analyses were performed using Student t test. Each bar represents the mean ± sem. *P < 0.05; **P < 0.01.

We first applied the ELISA to confirm that CCL2 is significantly reduced in the HH CD4+ T cell and WPMY-1 co-culture system (Figure 4B). We the applied an interruption approach via adding the recombinant CCL2 protein to the co-culture system, and found ASC-J9® no longer had the ability to reduce HH CD4+ T cells migration, suggesting CCL2 may play a key role in HH CD4+ T cells migration to prostate cells (Figure 4C). Importantly, results from in vivo mouse model also confirmed the in vitro cell co-culture system showing CCL2 was suppressed in the ASC-J9® treated NOD mice compared to the non-treated mice (Figure 5).

In this study, we demonstrated that infiltrated CD4+ T cells play important roles in prostatitis by using NOD mice which can be rescued by ASC-J9®, the newly developed AR degradation enhancer. We also demonstrated ASC-J9® can decrease the recruitment of T cells to the prostate stromal cells via altering CCL2 cytokine signaling.

Cytotoxic and Helper T cells are reported to be involved in prostatitis [5, 7–9]. Previous studies indicated that tumor-derived CCL2 can enhance progression and malignancy of breast cancer [22, 23]. In contrast, other studies reported that introduction of the CCL2 gene into tumor cells correlated with decreased tumorigenicity and facilitated immune mediated tumor rejection [24–26]. These studies all suggested that CCL2 plays important roles in immune cells infiltration and inflammatory responses. In this study, we found CCL2 has a key role in CD4+ T cells recruitment and causes inflammatory reactions in prostate. ASC-J9® might be a potential anti-inflammation drug via altering CCL2 expression to reduced inflammatory immune cell infiltration.

NOD mice were from The Jackson Laboratory. Mice were kept under specific pathogen-free conditions. All animal studies have been approved by the institutional review board of the University of Rochester Medical Center Department of Laboratory and Animal Medicine. CCL2 recombinant protein was purchased from R&D Systems.

NOD mouse that spontaneously develop prostatitis were i.p. injected with 75 mg/kg body weight ASC-J9® or vehicle every 48 hrs for 2 weeks. After 2 weeks of injection, the mice rested for 2 weeks before next round of injection. The injection/resting cycles were continued until 4 pairs were sacrificed at 28 weeks and the other 4 pairs sacrificed at 32 week of age.

Mouse prostate tissues were collected and fixed by 10% formalin followed by paraffin embedding. Samples were sliced to 5 μm thickness. We used the primary antibodies of anti-CD4 (BD Biosciences) and anti-CCL2 (Biolegend). The primary antibody was recognized by the biotinylated secondary antibody and visualized by Vectastain ABC peroxidase system and peroxidase substrate DAB kit (Vector Laboratories).

HH and WPMY-1 were treated with vehicle or 2.5 μM of ASC-J9® for 1 day. Recruitment assay was performed using 24-well transwell inserts (8 μm pores) according to the manufacturer’s instructions (Corning, #3422). ASC-J9® treated HH cells were seeded on the upper chambers of transwell plates and WPMY-1 cells were seeded on the lower chambers of transwell plates containing 20% FBS. Migrated HH cells were counted after 24 h incubation. Each sample was assayed in triplicate.

This work was supported by NIH grant CA156700 and George Whipple Professorship Endowment, and Taiwan Ministry of Health and Welfare Clinical Trial and Research Center of Excellence (DOH102-TD-B-111–004).