Until now, the effect of bladder cancer cell (BCC) on human DCs remains unclear. In our study, DCs were co-cultured with BCC pumc-91 and adriamycin-resistant pumc-91/ADM. The phenotype and function of DCs were evaluated thereafter. Moreover, we also investigated the immunosuppressive effect of BCC on DCs might involve of Jak2/STAT3 pathway.

Inhibition maturation of human DCs by co-culture with BCC

We first evaluated the effect of BCC on DC maturation. Compared with control DCs, pumc-91-exposed DCs displayed reduced expression of CD11c, HLA-DR and CD86. Besides that, the expression of HLA-ABC further decreased in DCs co-cultured with pumc-91/ADM. However, there were no differences between control DCs and DCs co-cultured with SV-HUC-1, a human uroepithelial cell line (Figure 1A). In supernatant experiment, compared with control DCs and SV-HUC-1 cs-exposed DC, the pumc-91cs-exposed DCs expressed lower levels of HLA-DR, CD11c and CD86, while the expression of HLA-ABC further decreased in pumc-91/ADM cs-exposed DCs. (Figure 1B). These data indicate that not only bladder cancer cell, but also the soluble factors from BCC inhibited the maturation of human DCs, and there might be different mechanisms by which adriamycin-resistant BCC inhibits DC maturation. 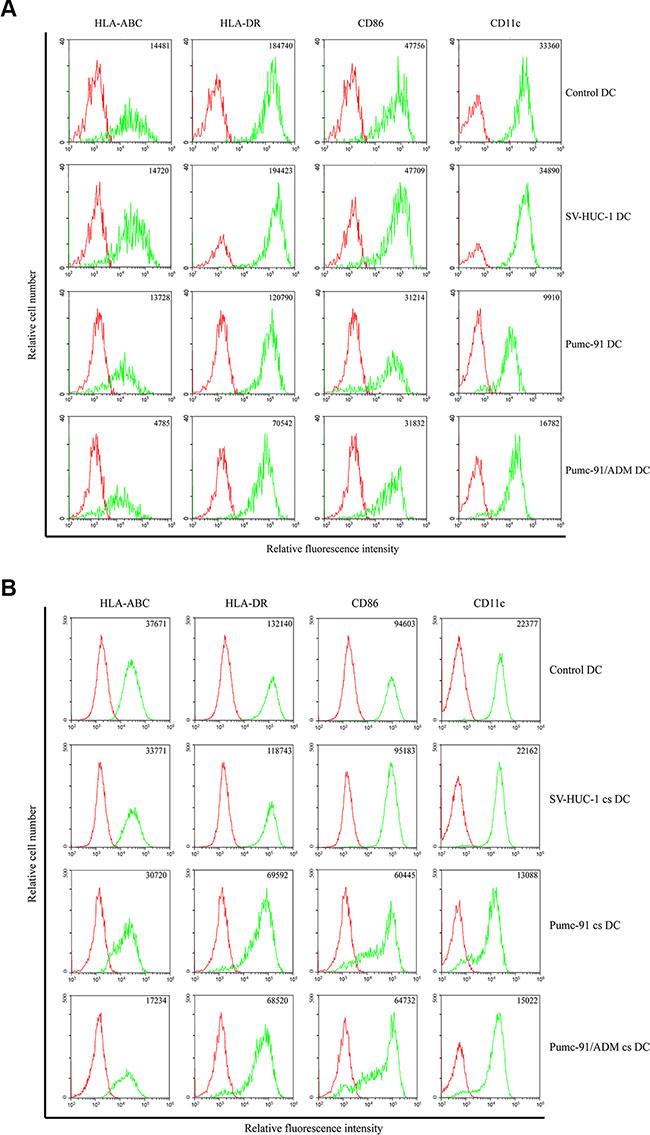 As cancer cells can escape immune surveillance by inducing DC apoptosis [25]. We next tested the effect of BCC on DC apoptosis. The apoptosis rate of DCs was assessed by the percentage of FITC-Annexin V positive cells, while the dead cells identified with propidium iodide. As shown in Figure 2, DCs co-cultured with BCC induced higher proportion of apoptotic cells in comparison to control DCs, and BCC promoted DC apoptosis.

The effect of BCC on the production of DCs-derived chemokines

In addition to HLA molecules and co-stimulatory molecules, chemokines secreted from DCs also play an important role in antitumor immune response. Supernatants of control DCs, SV-HUC-1 and BCC-exposed DCs were analyzed for production of IP-10, MCP-1, MIG, RANTES and IL-8. Compared with control DCs and SV-HUC-1-exposed DCs, BCC-exposed DCs secreted lower levels of IL-8 and RANTES. Interestingly, compared with control DCs and SV-HUC-1-exposed DCs, DCs co-cultured with pumc-91 produced more IP-10, while DCs co-cultured with pumc-91/ADM secreted more MIG (Figure 3). These data demonstrate that BCC could affect the production of DCs-derived chemokines, and there might be different mechanisms by which adriamy cin-resistant BCC inhibits DC function. 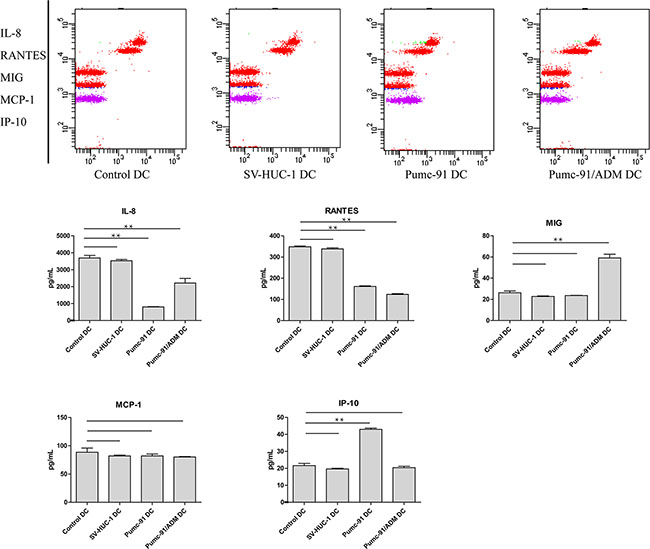 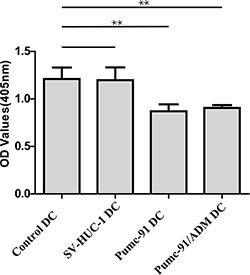 The effect of BCC-exposed DCs on T cell-derived cytokines 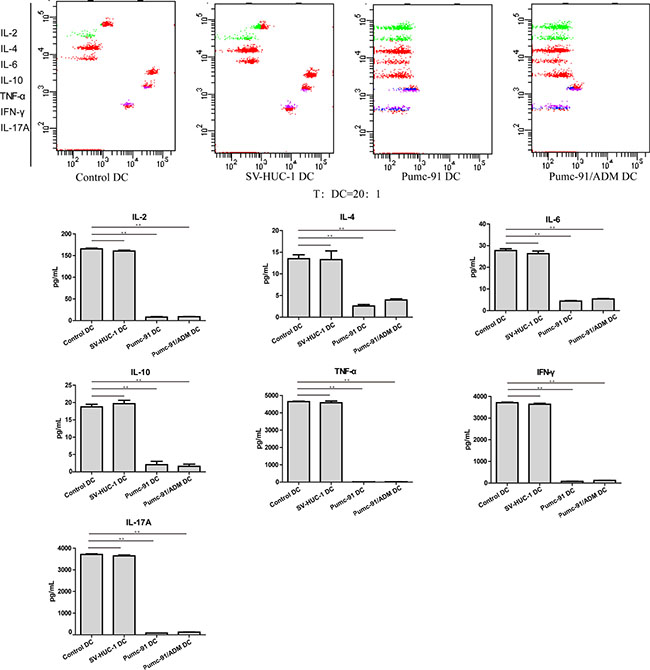 Immunosuppressive effect of BCC on DCs may through Jak2/STAT3 pathway 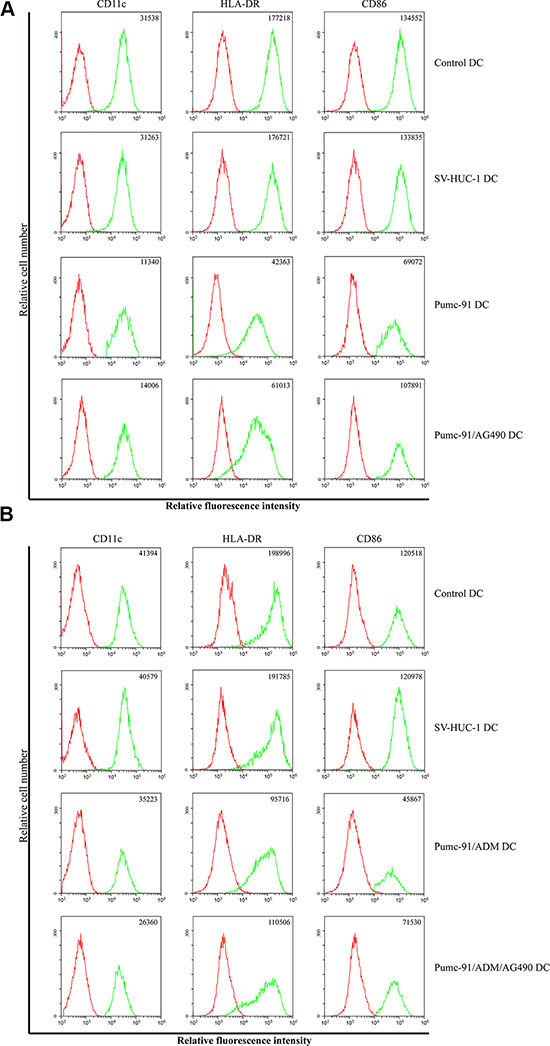 Figure 6: Effects of AG490 on BCC-exposed DCs phenotype. Pumc-91 (A) or Pumc-91/ADM (B) prior treated with AG490 and co-cultured with DCs for 24 h, the expressions of DCs surface markers were analyzed by FACS. The mean fluorescence intensity (MFI) are present in the top right of each panel. Data shown are a representative experiment of three.

Mature DCs activate tumor antigen-specific T cell to induce antitumor immune. However, immature DCs may lead to deficient activation of specific cytotoxic T cells, thus suppress antitumor immune response and promote cancer growth and progression [8, 10]. Recent studies reported that some cancers could induce immaturity and dysfunction of DCs. Uveal melanoma cell co-cultured DCs exhibited decreased expression of CD1a and CD83 and impaired T cell activation [16]. In our study, we identified the impairments in the phenotype of DCs co-cultured with BCC. We found that DCs exposed to BCC exhibited an immature phenotype. Compared with control DCs, DCs co-cultured with pumc-91 showed lower expression of CD11c, HLA-DR and CD86, while DCs co-cultured with pumc-91/ADM further displayed declined expression of HLA-ABC. In addition to the interactions between bladder cancer cells and DCs, DCs might be affected by soluble factors secreted from bladder cancer cells. DCs cultured with supernatants of pumc-91 and pumc-91/ADM showed similar impairment function. These data suggest that pumc-91 and pumc-91/ADM could suppress DC maturation. Interestingly, immunosuppressive effect of pumc-91 or pumc-91/ADM on maturation of DCs seems to be different. Of note, inhibition of DC maturation may be the characteristics of some tumors, while others not. Retinoblastoma cell could upregulate CD80 and CD86 on DCs, and stimulated allogeneic T cells proliferation [26].

A series of researches have been demonstrated that DCs undergo apoptosis after treated by cancer cells [25, 27]. Indeed, to evade antitumor immunity, cancer can induce DCs to undergo apoptosis, and thus lead to dysfunction of DCs [27]. BCC may utilize this mechanism to promote DCs apoptosis so that they could escape from immune surveillance. This may in part explain why T cells fail to become fully activated in our experiment.

As an effective inhibitor for Jak2/STAT3 pathway, AG490 reversed pancreatic cancer cell-induced inhibition of DC differentiation [28]. In our group, BCC decreased expression of costimulatory molecules on DCs, whereas BCC prior treated with AG490 could reverse the reduction of some molecules. This suggests that Jak2/STAT3 pathway, at least partly played a critical role in inducing immunosuppression effect of BCC. Furthermore, immunogenic apoptosis have a great effect on tumor microenvironment [29–31]. Compared to the ‘classical’ apoptosis, immunogenic apoptosis can induce DCs-based antitumor response. Bortezomib-killed tumor cells could be induced apoptosis, then activated DCs and enhanced antitumor T-cell response [32]. Prior treated with AG490 could cause apoptosis of lymphoma cells and promote DC maturation [18]. Accordingly, based on these findings, we speculate there may be same mechanisms by which AG490 effects on BCC and DCs.

CXCL8/IL-8 has multiple biological functions. On one hand, IL-8 led to aggressive growth and metastasis of human malignant melanoma [33]. On the other hand, IL-8 could inhibit growth and proliferation of some cancers [34, 35]. CCL5/RANTES is proinflammatory C-C chemokine. Several researches have demonstrated RANTES could delay or inhibit tumor growth and enhance the immunological antitumor effect [36, 37]. In our group, compared with control DCs, DCs co-cultured with BCC secreted less IL-8 and RANTES. Interestingly, compared with control DCs, pumc-91-exposed DCs secreted more IP-10, while pumc-91/ADM-exposed DCs produced more MIG. CXCL10/IP-10 is one of the Th1-attracting cytokines, and IFN-γ enhances expression of IP-10 during DCs maturation [38, 39]. IP-10 promoted invasion-related properties in human colorectal cancer cells [40]. Pumc-91 might utilize the properties to enhance its invasiveness. CXCL9/MIG induces tumor necrosis and exerts an important effect on antitumor response in Burkitt’s lymphoma [41]. Conversely, increased MIG could facilitate melanoma cell metastasis through CXCR3 [42]. Accordingly, immunologic function of MIG may depend on the characteristics of cancer. MIG secreted from pumc-91/ADM-exposed DCs might trigger cancer migration and invasion. These findings implied that the immunosuppressive effect of pumc-91 or pumc-91/ADM on DCs might have different mechanisms. Moreover, our study also suggested that it is necessary to supply different immunotherapy methods for drug-resistant bladder cancer patients.

In our study, the expression of CD86 decreased in BCC-exposed DCs. Interaction of CD86 and CD80 with CD28 led to the activation and proliferation of T cells [43, 44]. Keep in line with these findings, we found that there was impaired allogeneic T cells proliferation when T cells were co-cultured with BCC-exposed DCs. Our study suggested that BCC could induce DC dysfunction, failing to induce T cell response. Moreover, BCC-exposed DCs underwent rapid apoptosis which may reduce the time window during which they interact with T cells [45]. In addition, we observed that T cells secreted less cytokines when co-cultured with BCC-exposed DCs. The data suggest that BCC restrain DCs’ ability to activate T cells.

In summary, our study suggests BCC may inhibit maturation and function of DCs involving of Jak2/STAT3 pathway, and there may be different mechanisms by which adriamycin-resistant BCC restrains DC function in antitumor immune response.

Co-cultured of dendritic cells with BCC

On day 5 of DCs culture, 1 × 106 pumc-91 or pumc-91/ADM or SV-HUC-1 were added to each well of DCs. In a separate experiment, the cell-free supernatant of BCC was added to test DCs, while the same volume of AIM-V medium or SV-HUC-1cs was added to control DCs. On day 6, maturation of DCs was induced by 1 μg/ml of LPS (Sigma, USA) for 24 h. In most experiments, control DCs, BCC co-cultured DCs were washed and then purified with microbeads on QuadroMACS Starting kit (LD) using a Blood Dendritic Isolation kit (Miltenyi Biotech, Germany). The cell suspension was then passed through MiniMACS Starting kit (Miltenyi Biotech, Germany). According to the manufacturer’s instruction, cells were labeled with the Non-DC Depletion Cocktail, comprising CD1c (BDCA-1), CD14 and CD19 microbeads for negative selected. Then cells were labeled with DC Enrichment Cocktail, comprising CD304 (BDCA-4/Neuropilin-1), CD141 (BDCA-3) and Biotin microbeads for positive selected. The DCs samples contain more than 95% CD1c+ DCs in these experiments.

Phenotype of DCs co-cultured with BCC was analyzed by FACS. The following test antibodies conjugated with either allophycocyanin (APC) or phycoerythrin (PE) was used: CD11c, CD86, HLA-ABC, HLA-DR and isotype control mAbs (eBioscience, San Diego, CA). The phenotype of DCs was tested by staining with antibodies for 30 minutes at 4°C, and then washed twice in phosphate buffered saline (PBS). Samples were analyzed by a flow cytometer (CytoFLEX, Beckman coulter) and data were processed using accompanying software (CytExpert, Beckman coulter).

To examine apoptosis, DCs were washed with ice-cold PBS, stained by FITC Annexin V Apoptosis Detection kit I (BD Pharmingen) according to the manufacturer’s instruction. Samples were analyzed by the flow cytometer (CytoFLEX, Beckman coulter) and data were processed using the accompanying software (CytExpert, Beckman coulter).

Purified DCs were cultured in 6 well plates at a density of 1.8 × 105 cells/well in 2 ml of AIM-V medium. Cell free supernatant was harvested after induced maturation by using LPS. The level of IP-10, MCP-1, MIG, RANTES and IL-8 were measured by Cytometric Bead Array (CBA) Human Chemokine kit (BD bioscience) according to the manufacturer’s instruction. Samples were analyzed using a flow cytometer (FACS Canto, BD Bioscience) and data were processed by accompanying software (FCAP Array; BD Bioscience).

All the experiments were repeated three times. One-way ANOVA was used to estimate all analyses. P < 0.05 was accepted as statistical significance.

This work was supported by Beijing key Laboratory of Urinary Cellular Molecular Diagnostics (Z151100001615060) and National High Technology Research and Development Program of China (2014AA020901), and the National Nature Science Foundation of China (No.31400754).

33. Varney ML, Johansson SL, Singh RK. Distinct expression of CXCL8 and its receptors CXCR1 and CXCR2 and their association with vessel density and aggressiveness in malignant melanoma. American journal of clinical pathology. 2006; 125:209–216.