In spite of the recent advancements in the multidisciplinary treatment for oral squamous cell carcinoma (OSCC), OSCC remains one of the leading causes of cancer-related mortality worldwide [1]. Extensive epidemiologic evidence have demonstrated increased risk for the development of OSCC associated with areca nut chewing in Southeast Asia [2, 3]. Mounting short-term assay studies have demonstrated that arecoline, a major areca nut alkaloid, contributes pathogenesis of OSCC [4, 5]. Nevertheless, the underlying mechanisms by which the long-term arecoline participates in tumorigenesis of OSCC are not well understood.

Recent studies have revealed that cancer stem cells (CSCs) or termed tumor initiating cells (TICs) with tumors could contribute to tumor maintenance, metastasis, radio-resistance and chemo-resistance in a variety of cancers, including OSCC [6–11]. Moreover, the first connection of between CSCs and epithelial-mesenchymal transdifferentiation (EMT), a dynamic process in which cells lose epithelial features and gain mesenchymal properties, is demonstrated in breast cancer stem cells model [12]. Mani et al. found that mammary epithelial cells treated with EMT inducer TGFβ increased cancer stemness marker [12]. Our previous report has shown that S100A4, a mediator of EMT, plays a crucial role the regulation of cancer stemness and tumorigenic properties both in vitro and in vivo [13]. Overexpression of cancer stemness marker CD133 also increased EMT transformation in OSCC [8]. Therefore, understanding the relationships between areca nut and CSCs/EMT is important to improve further OSCC therapeutics.

In this study, we developed a chronic arecoline-treated oral epithelial cells model for phenotypic and molecular characterization of the arecoline-induced cancer stemness and EMT. The aim of this study was to explore whether long-term chronic arecoline treatment positively correlated with cancer stemness and EMT in OE cells. To the best of our knowledge, we found that long-term arecoline treatment enhanced the in vitro and in vivo tumorigenicity of OE cells, which could be blocked by miR-145 delivery. This study might open a new avenue for cancer stemness generation by areca nut and to be able to develop innovative treatments for areca nut-associated OSCC patients.

The mechanism by which chronic areca nut treatment progresses to OSCC is poorly described. We hypothesize that one of the mechanisms contributing to the oral carcinogenesis involves cancer stemness enhancement. Two oral epithelial cell lines, SG and FaDu cells, were treated with arecoline up to three months for cancer stemness evaluation compared with their parental cells. Mounting reports suggested that aldehyde dehydrogenase (ALDH) activity [14] and CD44 [7] expression could be the common markers to identify the oral CSCs. Our data reported that long-term arecoline sustained treatment dose-dependently elevated ALDH1 activity of OE cells (Figure 1A). CD44 expression levels were also higher in arecoline-exposed OE cells, but lower in parental OE cells (Figure 1B). 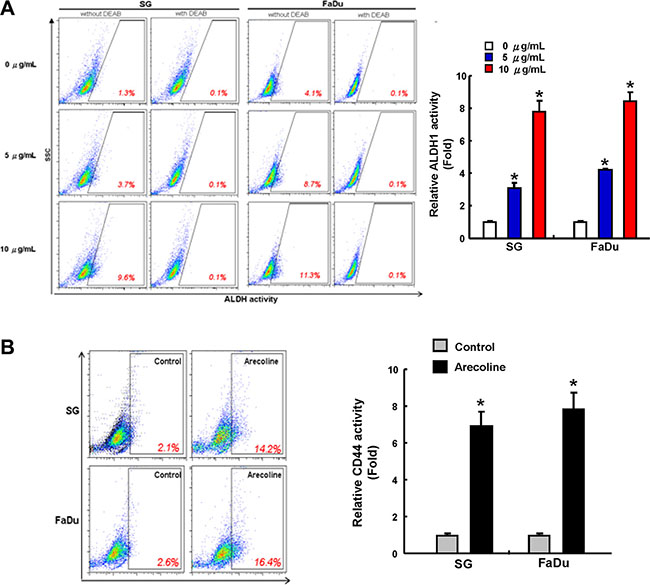 Figure 1: Increase of ALDH1 and CD44 activity in oral epithelial cells with long-term arecoline exposure. The expression of ALDH1 activity (A) and CD44 positivity (B) of control and long-term arecoline exposed oral epithelial cells (SG and FaDu) was determined by flow cytometry analysis. Data shown here are the mean ± SD of three independent experiments. *p < 0.05 vs. Control. 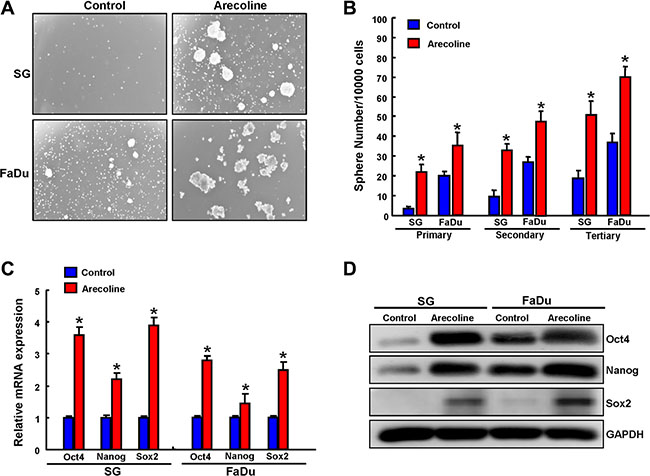 The observation of arecoline-enhanced the CSCs population and its properties suggested their involvement in modulating the chemoresistance, an important hallmark of CSCs [16]. To explore the expression of arecoline-exposed OE cells and chemoresistance, control and arecoline-exposed OE cells treated with chemotherapeutic agents and subjected to MTT analysis. MTT analysis revealed that OE cells with long-term arecoline exposure significantly increased chemoresistence to cisplatin (Figure 3A) and 5-FU (Figure 3B) compared to the parental OE cells. 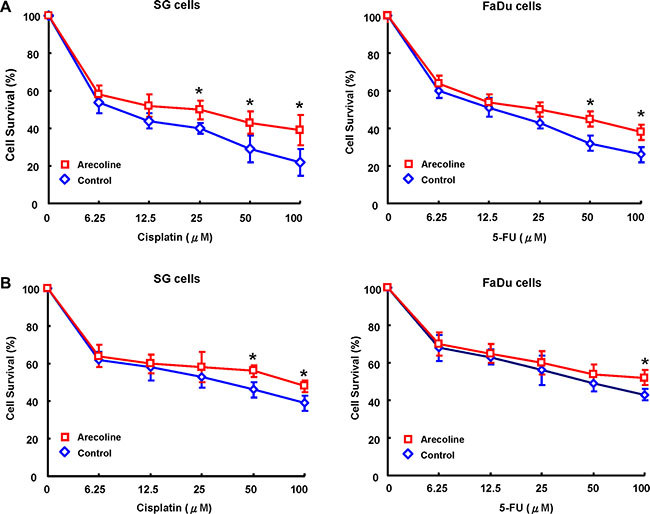 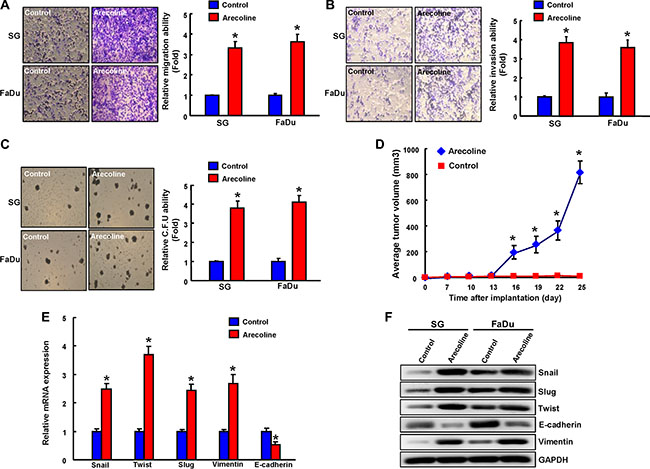 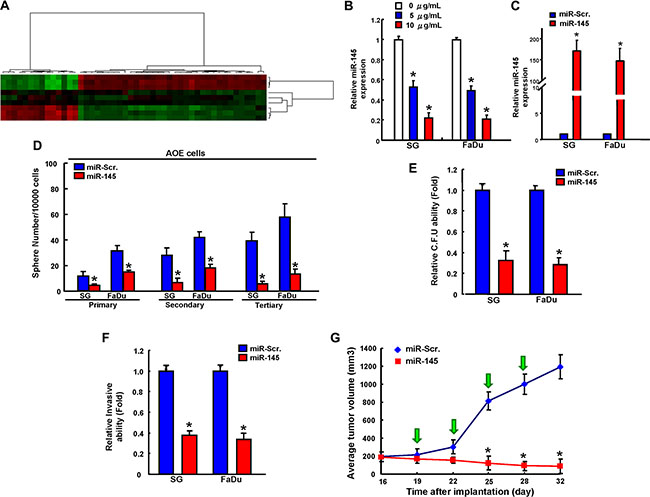 Subsequently, we illustrate complementarity between the 3′UTR regions of Oct4 and Sox2 and miR-145. To pinpoint the miR-145 target sequences in the 3’UTRs of Oct4 and Sox2, reporter plasmids which contained either full-length or mutated forms of the 3′UTR region of Oct4 and Sox2 were constructed (Figure 6A). Luciferase reporter assays demonstrated that miR-145 reduced the luciferase activity of reporter plasmids containing wild type Oct4 (Figure 6B) and Sox2 (Figure 6C) 3′UTR. However, when the potential Oct4 and Sox2 targeting site was mutated, miR-145 no longer inhibited the luciferase activity (Figure 6B and Figure 6C). Protein levels of Oct4 and Sox2 were also decreased in the miR-145-overexpressing AOE cells (Figure 6D). The functional involvement of Oct4 and Sox2 in miR-145-mediated cancer stemness and EMT in AOE cells was further clarified through Oc4/Sox2 overexpression. miR-145 suppressed spheres-forming capability in AOE cells, which would be rescued by Oc4/Sox2 over-expression (Figure 6E). Furthermore, Oc4/Sox2 over-expression in miR-145-overexpressing AOE cells partially counteracted clonogenicity (Figure 6F) and invasion phenomenons (Figure 6G). We demonstrated that miR-145 down-regulated a pattern of mesenchymal-like transcription factor (Snail and Slug) and up-regulated epithelial protein (E-cadherin) in AOE cells, were reversed by Oct4/Sox2 overexpression (Figure 6H). 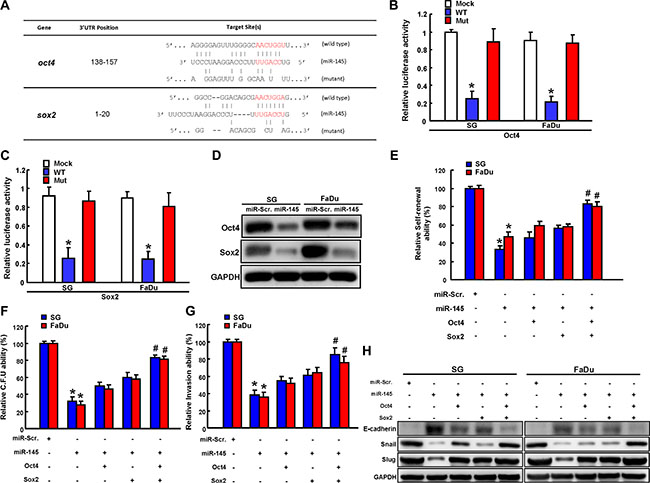 Figure 6: miR-145 regulated by long-term arecoline treatment targets Sox2 and Oct4. (A) Schematic presentation of the constructed Sox2 and Oct4 3′UTR reporter plasmids were used in this study. The wild-type and mutated (Mut) Oct4 (B) and Sox2 (C) reporter plasmids were co-transfected with miR-145 or empty vector. The luciferase activity of each combination was assessed and was presented with wild-type (WT) and mutated (Mut) reporter plasmids. The results of the luciferase assays indicated that only WT reporter activity was inhibited by miR-204. (D) The protein expression levels of Sox2 and Oct4 in transfected indicated plasmids were analyzed by western blot. Long-term arecoline-stimulated oral epithelial cells were transfected with miR145, SOX2, and Oct4 individually or concurrently indicated before being subjected to secondary sphere-forming (E), colony-forming ability assay (F), and invasion assay (G). The percentage or fold-change is presented in the chart. (H) Cells with indicated vectors transfection were then subjected to western blot analysis for the expression level of EMT markers expression. 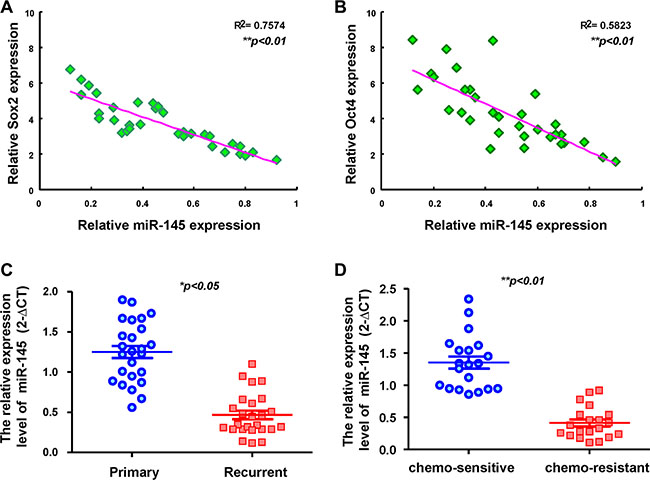 Epidemiological analysis has demonstrated the majority of OSCC arise in Southeast Asia are due to areca nut chewing together with tobacco smoking [18]. Nevertheless, the pathogenetic roles of areca nut in OSCC have not been well addressed. Epithelial to mesenchymal transition (EMT) process has been implicated as major contributor to oncogenic progression, cancer stemness and cancer metastasis [19]. Previous studies have shown that areca nut extract or arecoline could activate several EMT-related molecules, such as vimentin [20], Snail [21], and ZEB1 [4] in oral epithelial or fibroblastic cells. These interesting findings suggested a possible link between areca nut and EMT/stemness during oral carcinogenesis. In the study, we established chronic arecoline-exposed oral epithelial (AOE) cells. Using our model, these cells exhibit higher capability in oralsphere formation, populations of ADLH-positive cell induction, oncogenicity in vitro and in vivo, and potential for EMT conversion (Figures 1–4). We expect the study is to extend our approaches to insight the influence of arecoline in oncogenic and cancer stemness induction in vitro and in vivo, may allow us to develop potential targeting therapy against OSCC.

A growing number of recent studies have focused on environmental carcinogens exposure leading modulation of tumor malignancy through cancer stemness conversion. Arsenic [22–24] or nickel [25] exposure induced cell transformation through CSCs accumulation. Nicotine or its derivative 4-methylnitrosamino-1-3-pyridyl-1-butanone (NNK) could facilitate CSCs population generation in OSCC [26], breast cancer, colorectal cancer [27], pancreatic cancer [28]. Chronic ethanol exposure can increase the aggressiveness and CSCs of breast cancer cells via p38γ MAPK/RhoC signalings [29]. The areca nut chewing, tobacco, and together with alcohol consumption are the best known etiological factors for the development of OSCC. Future research would be required to examine whether the synergistic effect of these risk factors are involved in CSCs enhancement during OSCC carcinogenesis.

MicroRNAs (miRNAs) are short, non-coding RNAs that regulate gene expression either by translational inhibition or by degradation of the targeted mRNA [30]. It is also well known that dysregulation of miR-145 has been reported in several human solid tumors [31]. miR-145 has been found to be key role in suppressing tumor for OSCC development. miR-145 inhibits cancer stemness in various cancer types, including lung cancer [32], hepatocarcinoma [33], prostate cancer [34], and glioma [35]. This molecule is also associated with the cell cycle [36], differentiation [37], and apoptosis [38], metastasis [39], and chemoresistance [40]. Here, we confirmed that miR-145 negatively regulates cancer stemness in chronic arecoline-exposed OE (AOE) cells. Additionally, we found that Oct4/Sox2 stemness genes are targets of miR-145 through its binding to the Oct4 and Sox2 3′-UTR (Figure 6A). Co-overexpression of Sox2 and Oct4 rescued the repression effect of miR-145 on cancer stemness (Figure 6E–6G). As the Sox2/Oct4 also modulate the EMT of OSCC [41, 42], the regulation of the Sox2/Oct4 by miR-145 that modulate EMT and cancer stemness needs to be further investigated.

In conclusion, chronic arecoline exposure induces malignant phenotype with the acquisition of cancer stemness/EMT, and oncogenicity in vitro and in vivo. miR-145 might be partial mechanism of areca nut-induced OSCC. Validation and detail molecular understanding of later genes are ongoing to determine the arecoline associated pathway alterations during the OSCC tumorigenesis. A full understanding of the mechanism underlying arecoline-induced oral cancer may help to design a more effective strategy to treat areca nut-associated OSCC patients and prolong life.

The Smulow–Glickman (S-G) human gingival epithelial and FaDu OSCC cell lines were used in this study. The cultivation of these cells was following the protocols previously used.

Arecoline was purchased from Sigma Chemical Co. (St. Louis, MO¸USA) and was dissolved in ddH2O as a stock solution of 100 mM. Just before use, arecoline was further diluted in culture medium to appropriate final concentrations [41].

miR-145 overexpression plasmid constructs were generated according to our previous methods [9]. The Sox2 and Oct4 3′ UTRs were amplified by PCR and were cloned into the pMIR-REPORT vector (Applied Biosystems). Human full-length Oct4 and Sox2 cDNA was cloned into pCDH1-MCS1-EF1-copGFP (System Biosciences, Cat. No: CD511A-1; Mountain View, CA, USA). Lentivirus production was performed as previously [9].

All the animal practices in this study has been approved and in accordance with the Institutional Animal Care and Use Committee (IACUC) of Chung Shan Medical University university. Cells from each stable miR-145 -overexpressing or miR-Scramble cells will injected subcutaneously into BALB/c nude mice (6–8 weeks). Tumor volume (TV) will be calculated using the following formula: TV (mm3) = (Length × Width 2) / 2 [6].

With the permission of the institutional review board of Chun Shan Medical University, resected tissues from OSCC patients, who gave informed consent for the use of their tissue, were harvested at surgery. OSCC tumor samples were subjected to qRT-PCR analysis.