11Department of Orthopaedics, No. 5 Hospital of the PLA, Yinchuan, P. R. China

Accumulating evidence indicates noncoding RNAs (ncRNAs) fine-tune gene expression with mysterious machinery. We conducted a combination of mRNA, miRNA, circRNA, LncRNA microarray analyses on 10 adults’ lumbar discs. Moreover, we performed additional global exploration on RNA interacting machinery in terms of in silico computational pipeline. Here we show the landscape of RNAs in human lumbar discs. In general, the RNA-abundant landscape comprises 14,635 mRNAs (37.93%), 2,059 miRNAs (5.34%), 18,995 LncRNAs (49.23%) and 2,894 (7.5%) circRNAs. Chromosome 1 contributes for RNA transcription at most (10%). Bi-directional transcription contributes evenly for RNA biogenesis, in terms of 5’ to 3’ and 3’ to 5’. Despite the majority of circRNAs are exonic, antisense (1.49%), intergenic (0.035%), intragenic (1.69%), and intronic (6.29%) circRNAs should not be ignored. A single miRNA could interact with a multitude of circRNAs. Notably, CDR1as or ciRS-7 harbors 66 consecutive binding sites for miR-7-5p (previous miR-7), evidencing our pipeline. The majority of binding sites are perfect-matched (78.95%). Collectively, global landscape of RNAs sheds novel insights on RNA interacting mechanisms in human intervertebral disc degeneration.

Intervertebral disc degeneration (IDD) is the chief contributing factor to low back pain with deleterious medical and social impact [1]. Increasing evidence reveals that IDD is a multifaceted spinal disease. Both genetic and environmental factors contribute to IDD, the chief of which are genetics [2, 3]. The genetics machinery ranges from single-nucleotide variants [4] and coding genes [5–8], to newly defined noncoding RNAs (ncRNAs).

Recent whole-genome sequencing (WGS) studies have greatly expanded our scopes upon human genome [9, 10]. As a multitude set of transcript products of the human genome, ncRNAs account for 98% of the human genome devoid of protein-coding function. Overwhelming evidence indicates that ncRNAs widely exist in living things. Moreover, ncRNAs play critical roles in a variety of biological processes pertaining to gene expression [11, 12].

The ncRNA superfamily comprises small ncRNAs (miRNAs), long ncRNAs (LncRNAs) and the newly defined circular RNAs (circRNAs) in terms of length and structure. Indeed, RNAs play fundamental roles in organisms. Not only different lengths, but sequences or structures (e.g., riboswitches) of RNAs, are critical [13, 14]. In structure, miRNAs are ~21-nucleotide-long noncoding RNAs. LncRNAs contain nucleotides over 200, even more than 100,000 [15]. CircRNAs are a class of ncRNAs with covalent linked ends. Emerging as the first representative of ncRNA family, miRNAs direct an effector protein Argonaute (AGO) to suppress their targets’ expression [16]. The mysterious class of LncRNAs has been addressed recently with increasing uncovered numbers. Furthermore, a growing body of evidence indicates that LncRNAs play important roles in each issue of human biology [17]. LncRNAs can be divided into different subgroups in terms of their genomic contexts: stand-alone LncRNAs or lincRNAs [18]; Natural antisense transcripts [19]; Long intronic ncRNAs [20]; Divergent transcripts, promoter-associated transcripts and enhancer RNAs [21]. In mechanism, LncRNAs are key regulators in epigenetics as recruiters, tethers and scaffolds [22]; in transcription as decoys, coregulators and Pol II inhibitors [23]; in post-transcriptional regulation involving in mRNA processing, stability and translation [23].

In contrast, studies on circRNAs are at their early stage. It has been noted that circRNAs act as post-transcriptional regulators. CircRNA expression is tissue/developmental stage specific. They can interact with miRNAs via miRNA sponges and competing endogenous RNA (ceRNA) in the cytoplasm [24–26]. In details, miRNA sponges indicate that a circRNA with miRNA binding sites could absorb the miRNA and eliminate the original repression on the miRNA-targeted gene.

Regarding ncRNAs in human IDD, we have addressed the expression profiles of miRNAs previously using scoliotic nucleus pulposus (NP) as control [27]. Moreover, we addressed the expression profiling of LncRNAs and mRNAs in IDD using normal NP control [28]. It has been noted that there might be a regulatory link between LncRNAs, circRNAs and miRNAs. LncRNAs and circRNAs could repress miRNAs via various mechanisms, e.g. miRNA sequestration. Furthermore, the interaction of circRNAs and LncRNAs remains mysterious.

On the other hand, it should be stressed that discs from scoliotic patient are abnormal [29]. Accordingly, we conducted miRNAs and circRNAs microarray analyses using the same total RNA samples from lumbar NP tissues as LncRNA-mRNA microarray. Moreover, advanced bioinformatics data analyses were employed.

Based on tetrad array platforms using the same 10 lumbar disc samples, we successfully established a SuperSeries in GEO (GSE67567) [28, 30] (Figure 1A). The BioProject accession of this SuperSeries is PRJNA280271, which encompasses and links the expression profiles of miRNAs (GSE63492), LncRNAs and mRNAs (GSE56081) and circRNAs (GSE67566). We addressed RNAs expression profiles by comparing RNAs in 5 degenerate disc samples with those in healthy disc samples. 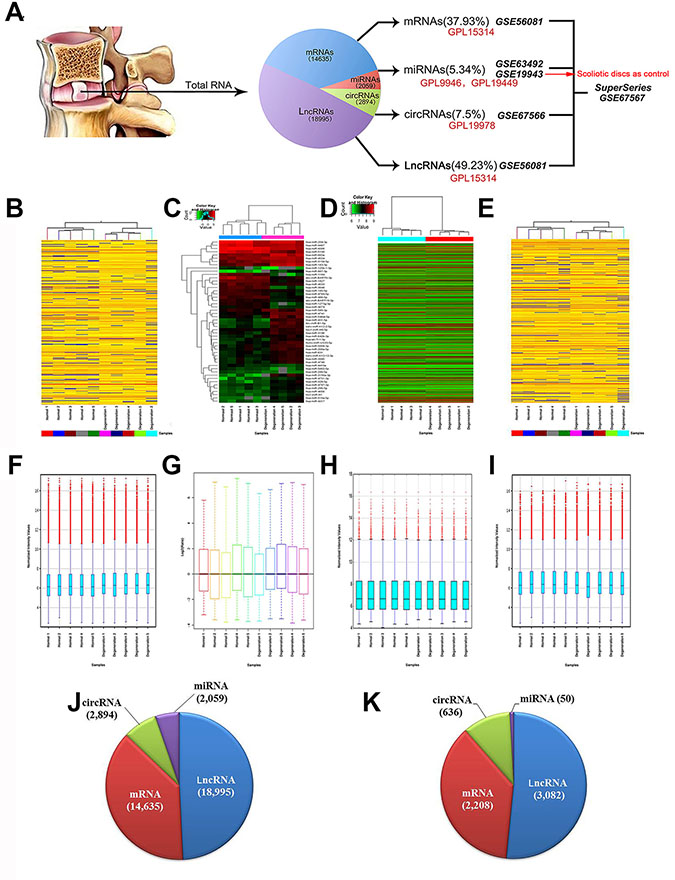 Landscape of RNAs in human IDD 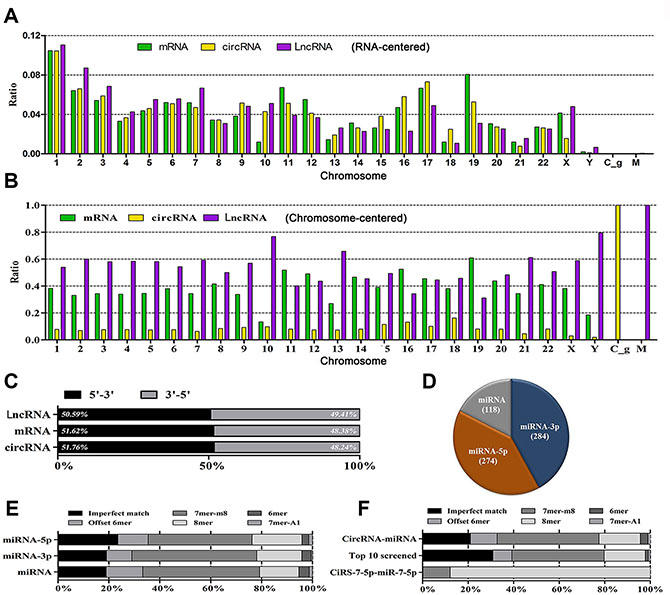 Interacting hallmarks from the point of miRNAs 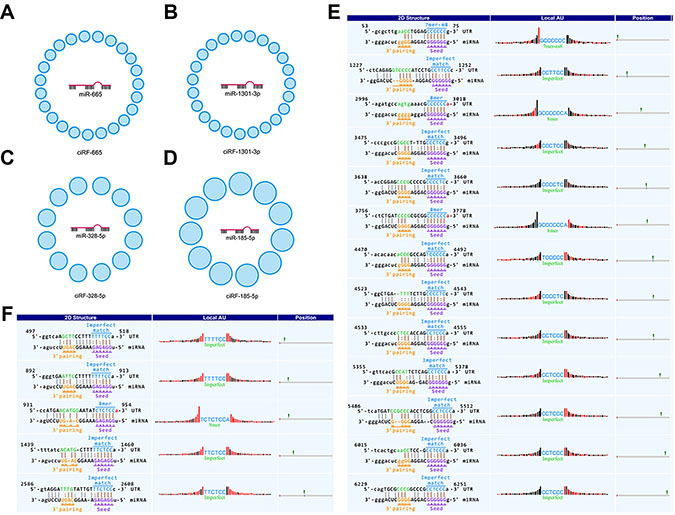 Interacting hallmarks from the point of circRNAs

We noted that circRNAs commonly combined with the 3p or 5p of miRNA (Supplementary Table S9). It is well established that miR-3p or miR-5p derives from the arms of stem loops of pre-miRNAs. We termed the phenomena as Stem Loop Arm Sponge (SLAS, Figure 4A). Moreover, we found that a single circRNA commonly interact with at most 5 miRNAs (99.31%) as sponges following intensive exploration. In total, there were 20 circRNAs interacting with less than 5 miRNAs (range 1–4, Supplementary Table S10). Considering the available evidence [26] and the principle of complementary base pairing, we putatively put forward the phenomena as sponge saturation (Figure 4B, Supplementary Figure S1). 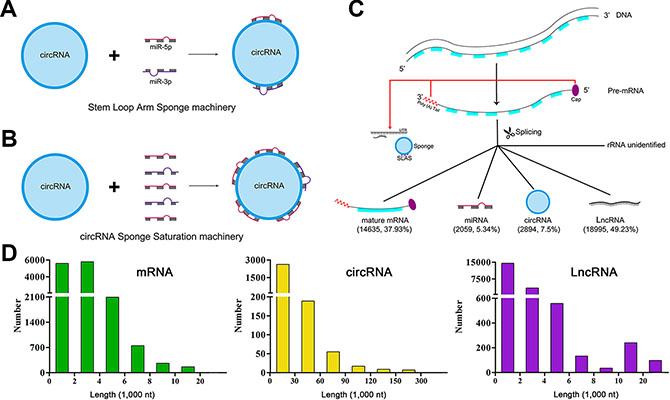 Figure 4: The miRNA-circRNA binding machinery and landscape of RNA length. (A–B) indicate miRNA-circRNA interacting machinery. (C) is the diagram of RNA transcription and splicing. (D) delineates the length scope of each type of RNAs.

Binding principle for ncRNAs and mRNAs

It is well established that RNAs have polarity with one 3′ ends and one 5′ ends. At the 3′ ends, most eukaryotic mRNAs have a sequence of polyadenylic acid, referred to as the poly (A) tail. Appropriate poly (A) tail length is crucial for efficient translation, being ~70 residues [35, 36]. As well, the methyl guanosine ‘cap’ at the 5′ ends of all eukaryotic mRNAs plays critical roles during mRNA processing and metabolism [37].

Pre-RNAs undergo several steps of RNA splicing during which the phosphodiester bonds at exon-intron boundaries are cleaved and the introns are excised. The process is transcription during which RNAs mature. circRNAs are chiefly the products of exons splicing co-transcriptionally mediated by the spliceosome and flanking introns [24].

Based on previous lines of evidence and our findings, back-spliced exons and introns produce circRNAs co-transcriptionally. Subsequently, circRNAs accumulate in the most crucial regions for mRNAs processing and metabolism, i.e., cap and poly (A) tail regions, acting as miRNA sponges via the SLAS machinery by interacting with miR-3p or miR-5p. Consequently, circRNAs frequently get saturation by interacting with at most 5 miRNAs. These fine tuning processes reflect the regulatory networks between circRNAs, miRNAs and mRNAs (Figure 4C).

We addressed the expression profiles of miRNAs in IDD using scoliotic NP as control [27] (GSE 19943), amongst which 10 miRNAs were upregulated and 67 miRNAs were downregulated. In addition to the difference of microarray platform (miRCURY™ LNA Array v.11.0 vs. miRCURY™ LNA Array v.18.0), we found that the expression profiles of miRNAs were largely different in NP samples in terms of normal, scoliotic and IDD. Collectively, these findings indicate that miRNAs play a role not only in the etiology of IDD, but in the underlying mechanisms of scoliosis. 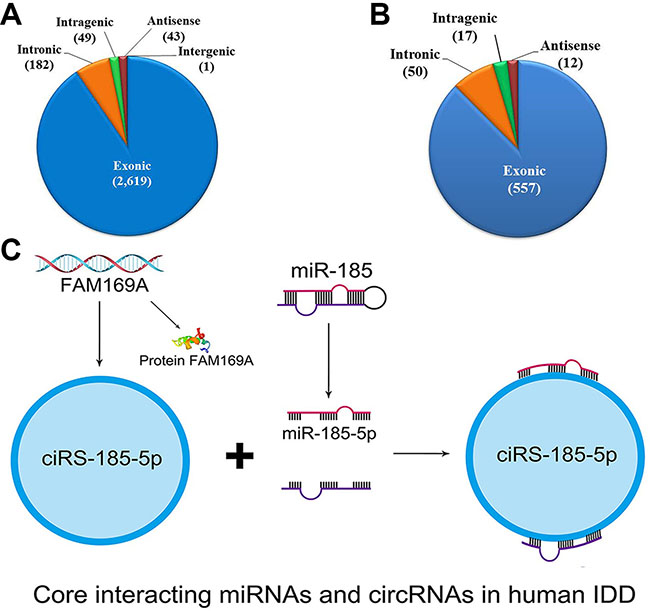 To validate the miRNAs and circRNAs microarray results, two miRNAs and two circRNAs were selected for qRT-PCR validation. The expression of hsa-miR-887-3p (P < 0.05) and has-circRNA-101852 (P < 0.05) was significantly increased in degenerative samples compared with control; whereas the expression of hsa-miR-125b-1-3p (P < 0.05) and has-circRNA-101645 (P < 0.05) were significantly decreased (Supplementary Figure S3). In summary, qRT-PCR validated the microarray outcome.

The study is the first addressing mRNAs and ncRNAs in a type of human tissues rather than cultured cells. Furthermore, the expression profiling of RNAs sheds novel light on the understandings of not only the broadly influencing disease as lumbar IDD, but RNAs per se. These RNA hallmarks might reflect the true scenarios in human lumbar disc diseases and low back pain. Moreover, the novel vision might open a new page for RNA studies, based on RNA derivation from different Chromosomes. Strikingly, the length of mRNAs, circRNAs and ncRNAs varies to a great extent, the shortest of which is 2 lncRNAs (mascRNA and lincRNA-NFIA-2) with 61 nt. In contrast, the longest RNA is a circRNA (circRNA-100723) with 433,729 nt. These extreme RNAs might be the key to the treasure door of the truth on RNAs.

Traditionally, it has been reported that circRNAs derive from back-spliced exons [24, 25, 31, 32]. Surprisingly, we found nearly 10% circRNAs belong to intronic, antisense, intergenic rather than exonic types. Differentially expressed circRNAs remain the trend as shown in Figure 5B. The finding greatly expands our vision on circRNAs and splicing.

Accumulating evidence indicates that circRNAs expression has spatio-temporal features. Memczak et al. [32] identified 1,903 circRNAs in mouse tissues (brains, fetal head, differentiation-induced embryonic stem cells); 81 of which mapped to human circRNAs. Indeed, the brain is circRNAs abundant in human, mouse [31] and porcine [43]. The abundance of circRNAs is spatial and temporal depending, with the maximum in cortex at day 60 of gestation with 4,634 circRNAs [43]. As for H9 human embryonic stem cells, the abundance of circRNAs is 1,662 [26].

Bachmayr-Heyda et al. [44] compared the expression abundance of circRNAs in 13 human tissues. The most abundant tissue expressing circRNAs is brain and the lowest is muscle. In testis, Sry acts as miR-138 sponge [32]. We identified 2,894 circRNAs in human lumbar discs as a novel circRNA-abundant tissue.

LncRNA and mRNA microarray analysis was conducted as we previously reported [47].

Accumulating evidence indicates circRNAs play a crucial role in the delicate tuning of miRNA-mediated regulation of gene expression by sequestering corresponding miRNAs. The interacting machinery between circRNAs and miRNAs associated with diseases suggests that circular RNAs are important for disease regulation [49]. The circular RNA ciRS-7 contains various, tandem miRNA-7 binding sites, thereby acting as an endogenous miRNA “sponge” to adsorb, and hence quench, normal miRNA-7 functions [50]. ciRS-7 might serve as a crucial factor engaged in the functioning of neurons as well as a candidate in neurological disorders and tumor development on basis of several lines of evidence as follows: the widespread involvement of miR-7 as a key regulator of various cancer pathways; the suggested implications of miR-7 in Parkinson’s disease by direct targeting of a-synuclein protein expression; direct targeting of the ubiquitin protein ligaseA (UBE2A) in Alzheimer’s disease.

Candidate target genes were validated with highly reliable biotechniques such as qRT-PCR [53].The primers were listed as Supplementary Text S3.

Statistical analyses were performed using SPSS 19.0 software package. To analyze the expression difference of the particular lncRNAs or mRNAs in microarray and PCR analysis, student’s t-test was applied to the study. Furthermore, the Benjamini-Hochberg FDR (the FDR cutoff was 0.05) was used for multiple-testing correction. The threshold of significance was set as P-value < 0.05.

We thank KangChen Bio-tech, Shanghai P.R. China for their technical support for the microarray work and qRT-PCR experimentation. We would like to thank Dan Li for his help in cadaveric specimen collection.

HQW conceived the study; PHL, ZHL, YJP, ZGW, CJM, XL, ZYW obtained the samples and carried out experiments; and PHL, YY, YFY, ZHL, LC, YKX, QJH analyzed data. All authors were involved in writing the paper and had final approval of the submitted and published versions.