Prostate cancer morbidity and mortality are rising in numbers of developing countries, including China, although advancement in treatment options and/or early detection significantly reduced prostate cancer mortality in developed countries [1]. Appropriate prostate cancer staging and grading will guide treatment selections and predict prognosis of prostate cancer [1, 2]. Serum prostate-specific antigen (PSA) level, pT stage, and Gleason score were traditionally recognized as prognostic factors, although their accuracy may have limitations [3-5]. To date, radical prostatectomy is one option to cure prostate cancer patients, but certain percentage of such patients still develop a biochemical recurrence in early postoperative period of time [6]. The biochemical recurrence after radical prostatectomy was defined as two consecutive rising of serum PSA levels greater than 0.2 ng/ml during the follow-up [7]. Thus, research on identification and evaluation of novel molecular markers could help urologists to precisely assess prostate cancer risk, recurrence, and prognosis clinically [8, 9].

Connexin 43 is a gap junction (GJ) protein to form a transmembrane protein channel structure between cells and functions to promote the material exchange and communication of adjacent cells, which plays an important role in regulation of cell proliferation, differentiation, and homeostasis [10, 11]. A previous study showed that Connexin 43 expression was decreased or lost in prostate cancer tissues, which was significantly associated with disease progression and unfavorable prognosis [12]. Expecting to provide insightful information regarding Connexin 43 expression as a biomarker for prostate cancer progression, we collected pathological specimens from 243 patients who underwent radical prostatectomy and from 60 benign prostatic hyperplasia (BPH) patients for tissue microarray construction and immunohistochemical analysis of Connexin 43 expression. We then associated Connexin 43 expression with clinicopathological characteristics or biochemical recurrence after surgery.

This study was approved by The ethics committee of the First Affiliated Hospital of Fujian Medical University (Fuzhou, China). After patients provided the informed consent, we collected pathological specimens from 243 patients who underwent radical prostatectomy between January 2005 and January 2010 and from 60 benign prostatic hyperplasia (BPH) patients between January 2005 and January 2010 at our hospital. Patients with detectable PSA (>0.1 ng/mL) at the first month after radical prostatectomy usually have had persistent cancer and received postoperative radiotherapy and/or hormone therapy, so such patients were excluded from this study [13, 14]. Patients were diagnosed histologically and didn’t receive any preoperatively adjuvant endocrine therapy or radiotherapy and patients with uncompleted clinical and pathological data were excluded from this study. All prostate cancer cases were staged according to clinical staging of prostate cancer, including digital rectal examination, transrectal ultrasonography, serum PSA and bone scans, while some cases presented with bilateral lymphadenectomy and had showed no lymph node metastasis. After radical prostatectomy, patients were followed up regularly, i.e., clinical examination and serum PSA test at the first month after surgery, then every 3 months for two years, and semiannually thereafter. The time of biochemical recurrence was recorded or to the last follow-up date (November 2015). Patients were followed up for 61 months (median, ranged between 7 and 97 months) and 35 of 243 (14.4%) patients had biochemical disease progression and the median time of biochemical recurrence was 37 months (ranged between 10 and 73 months). These 60 cases of BPH were randomly selected from the same hospital as a control. Clinical data, including age, preoperative PSA, prostate volume, PSA density (PSAD), body mass index (BMI), percentage of positive biopsies, pathological T stage, positive surgical margin, extracapsular extension and seminal vesicle invasion were also collected (Table 1).

For immunohistochemical analysis of Connexin 43 expression, the TMA sections were deparaffinized in xylene and rehydrated in a series of ethanol solutions. The TMA sections were subjected to antigen retrieval in 0.1 M citric acid buffer (pH5.0; Fuzhou Maixin Biotech. Co., Ltd., Fuzhou, China) using a high-pressure cook and then subjected to incubation in 3% H2O2 for 10 min to block endogenous peroxidase activity. The sections were washed with phosphate buffered saline (PBS) three times and incubated with 20% normal goat serum at the room temperature for 30 min and further with a monoclonal anti-Connexin 43 antibody (Cell Signaling Technology, Inc.; Danvers, MA, USA) at a dilution of 1:200 at 4°C overnight. After that, the sections were washed with PBS three times and then incubated with a secondary antibody (DAKO company, Carpentaria, CA, USA) at 37°C for 30 min and subsequently with a ChemMate™ EnVision™ Detection Kit (DAKO company). To visualize the primary antibody-binding signal, the sections were stained with 3,3’-diaminobenzidine (DAB) solution and counterstained with hematoxylin briefly and then mounted with a coverslip. Previous confirmed positive sections were used as a positive control, while 20% normal goat serum replaced the primary antibody and used as a negative control. The immunostained TMA sections were reviewed and scored under a light microscope (Olympus, Tokyo, Japan) by two pathologists separately and any discrepancies were resolved by their re-reviewing of the sections. These TMA sections were semi-quantitatively scored for staining intensity and proportionally staining of positive cells. Staining intensity was scored for 0 (no staining), 1 (weak staining), 2 (moderate staining), and 3 (strong staining), while the percent positivity of staining was defined as 0 (<5%), 1 (5% -25%), 2 (26% -50%), 3 (51% -75%), 4 (> 75%). The final Connexin 43 expression score was calculated using the value of percent positivity score multiply staining intensity score as “-” (score, 0-1), “+” (score, 2-3), “++” (score, 4-5) and “+++” (score ≥ 6) [17].

Our immunohistochemical data showed that Connexin 43 protein was mainly expressed in the cytomembrane of prostate epithelia cells in BPH tissues (Figure 1), but lost or reduced in prostate cancer tissues (39.1% vs. 96.7%; P <0.001). 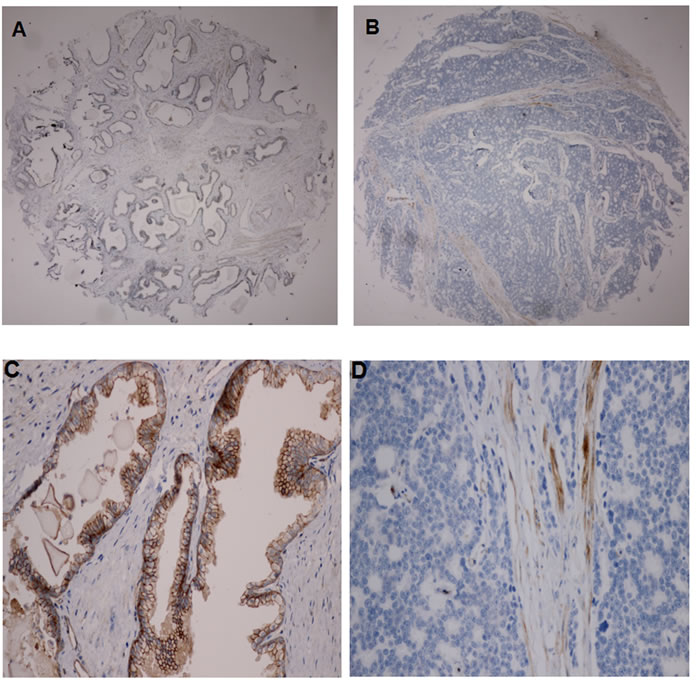 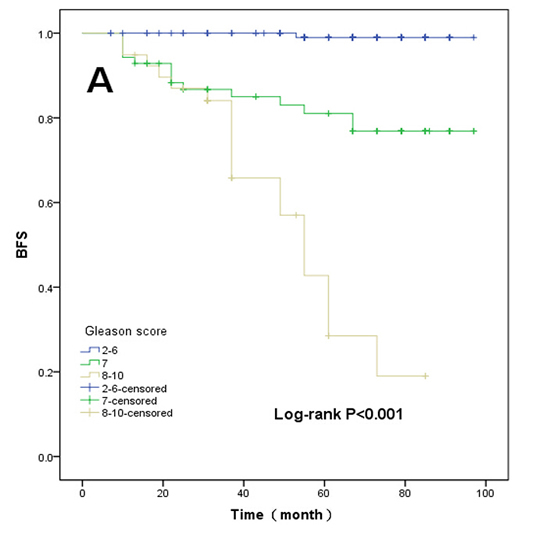 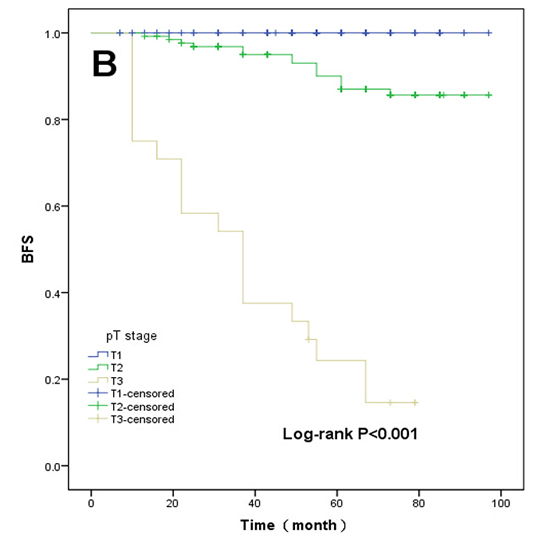 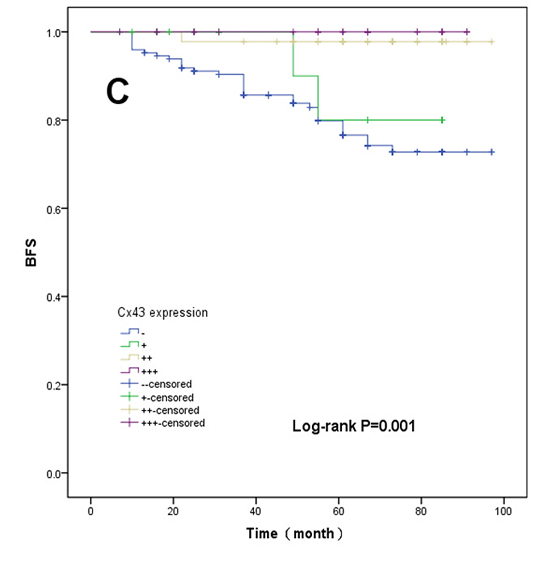 However, the current study may also have limitations due to the retrospective nature of tissue samples and a single protein analysis (alteration of other connexins could also play a role in prostate cancer). In conclusion, our data demonstrated that Connexin 43 expression was reduced or lost in prostate cancer tissues, which was significantly associated with unfavorable clinicopathological parameters and BFS of patients. Thus, more aggressively adjuvant therapy could be needed to treat those patients with lost Connexin 43 expressed prostate cancer.

The authors declare that there is no conflict of interest in this work.