* These authors have contributed equally to this manuscript

Background & Aims: This study is designed for the clinical characteristics and prognostic factors of central neurocytoma (CN).

Methods: CN patients from 2004 to 2012 were enrolled from the Surveillance Epidemiology and End Results (SEER) data. Clinical characteristics including age, sex, race, tumor size, tumor number, surgery, and radiation therapy were summarized. Univariate and multivariate analysis were performed to explore the prognostic factors of CN.

Results: CN tended to be borderline malignant and single lesion. Compared with other brain tumor (NCN), Patients with CN (CNs) were more likely to be female, young, and non-white race. Surgery was the primary treatment of CN. Univariate and Multivariate analysis indicated tumor number and surgery were both independent prognostic factors of CN (P < 0.05). Unifocal CNs had a lower mortality risk than multifocal ones (HR 0.167, 95% CI 0.052-0.537), surgery significantly reduced the death risk of CNs (HR 0.284, 95% CI 0.088-0.921).

Conclusions: CN tend to be borderline malignant, single lesion, operated on. Most CNs are female and younger. single lesion and surgery are the independent positive prognostic factors of CN.

Central neurocytoma (CN) is a rare central nervous system tumor. It was firstly reported by Hassoun and colleagues in 1982 [1], and was classified as grade II by the World Health Organization in 2000 [2]. Previous studies showed that CN mainly sited in deep mid-line structures near the foramen of Monro, with neurological symptoms of intracranial hypertension, such as headaches and/or visual changes [3]. CN often occurred in young adults [4-6]. Most CN were benign or borderline tumor, and of long-time survival with a gross total removal [7, 8] . However, for the low morbidity, only less than one thousand cases of CN have been reported in the world till today [9]. Thus, detail clinical information of CN is still not very clear, and large sample research of it is very necessary.

The Surveillance, Epidemiology, and End Results (SEER) Program is founded by the National Cancer Institute (NCI) in the United States as an open cancer related database. It records cancer incidence and survival data from population-based cancer registries and covers approximately 28% of the US population. With large information of cancer, it is a very important tool to analyze rare carcinoma.

Table1: Summary of clinical characteristics between CN and NCN 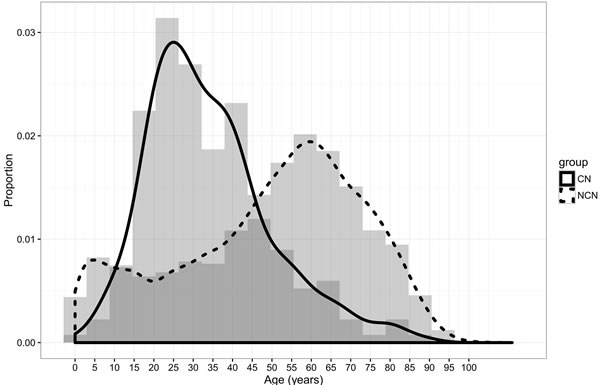 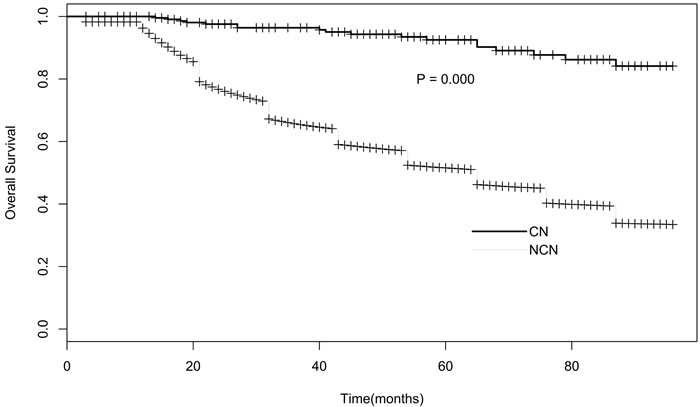 Figure 3: Survival curve of CN based on number (A) and treatment (B).

The incidence of central neurocytoma is very low, with only 0.1% to 0.5% among all primary brain tumors [4, 10, 11], which makes only several hundred cases being reported since CN was established in 1982 [1, 9]. Although with a low mobility, CN mainly occures in young adults [4-6], performs as a nonmalignant tumor, and may carry favorable prognoses with opportune treatment [7, 8]. All of these make it an important brain tumor worthy of attention. However, as for CN typically site at the deep midline structures near the foramen of Monro, intracranial hypertension is very easy to generate and rapidly aggravate in the early stage, and even lead to herniation and death [8, 10]. Contradiction between the favorable prognoses and rapidly aggressive clinical symptoms made it valuable to clarify the clinical characteristics and prognostic factors of CN, for the optimal treatment strategy and long-time survival.

So far, as we know, almost all the data of CN were from various case reports or small sample retrospective studies, which made the information of CN very unclear and paradoxical. Information from these studies indicated that CN mainly affect young adults at the age between 20 to 40 [4, 7], but no researcher reported the exact peak age. Most studies reported CN seemed to have equally probability in male and female [4, 12], but someone believed male had more chance [13, 14].It usually performed benign, or not malignant [14, 15], but could also exhibit more aggressive clinical behavior, especially in some atypical variants [16-18]. CN typically located in deep midline structures near the foramen of Monro, such as the third ventricle or the anterior portion of the lateral ventricle [3, 8]. but there were also some rare cases of extraventricular neurocytoma reported in other locations, such as spinal dissemination [19-22]. Surgery was the primary initial treatment for CN [23-25], but whether complete resection surgery correlates significantly with overall survival was still disputed [8, 24, 26, 27]. Meanwhile, radiosurgery was also reported by some small sample studies to perform nice effect and little complications to CNs in the past several years [28-31]. Conventional radiotherapy was mainly applied for the management of residual or recurrent CNs [32, 33], but its effect to overall survival was still full of controversial [8, 24, 34-36], and the radiation-induced toxicity was also hard to be ignored for the long-time clinical course [37, 38]. Studies on the prognostic factors of CN was still very few. As far as we known, MIB-1 and surgery were the only two reported possible prognostic indexes of CN [39-41], and there were still some studies opposed to surgery as a prognostic factor [8, 24]. Whether there were other clinical prognostic factors of CN was still unclear. Because of these conflicting views, we designed this study for a further exploration of the characteristics and prognostic factors of CN with SEER database.

In this study, we summarized the clinical characteristics and treatment methods of patients with CN, with the data provided by the SEER database from 2004 to 2012. Characteristics we analysized included sex, race, age, tumor behavior, size, number, surgery and radiation therapy. Firstly, We found CN patients were more likely to be Female, young, single lesion compared with other brain tumors. In our study, the ratio of male vs female was 1:1.1, no significant sex variation. This was in line with Yasargil and Sgouros’s studies [4, 12] , but not agree with Chen and kim’s reports [13, 14]. Histogram and density plot of onset age (Figure 1) demonstrated that the peak age of onset was in first half of twenties, with a steep fall after the age of 35 years, though there was another small peak at the age of 40. That was also why we chose 35 years as the critical point of age. This onset age distribution was in according with the previous studies [4, 7], but more detailed. Secondly, as Kim and his partners mentioned [14], we found almost all the CNs were borderline malignant (98.7%), the left were benign, and hence with a much longer median survival time than other brain tumor (96+ months Vs 65 months). Patients with CN were likely to receive more surgery (89.9%) and less radiotherapy (15.9%). Besides these, Univariate survival analyses of different clinical factors showed that overall survival (OS) was associated with tumor number and surgery (P < 0.05), but of no significantly association with sex, age, race, tumor behavior, size, and radiotherapy (P > 0.1). And finally, further multivariate cox proportional hazards regression analysis displayed that tumor number and surgery were both significantly associated with survival (P < 0.05). Death risk of patients with single tumor was lower than those with multiple tumors (HR 0.167, 95% CI 0.052- 0.537). Surgery could reduce more than 70% risk of death (HR 0.284, 95% CI 0.088-0.921).

In conclusion, our study demonstrates that CN tend to be female, young, single lesion, borderline malignant, more surgery, and less radiotherapy, compared with other brain tumors. Tumor number and surgery are both independent prognostic factors of CN. Patients with single focus live longer than those with multiple focus. Surgery does significantly prolong the overall survival of CNs.

SEER data between 1973 and 2012 [“Incidence - SEER 18 Regs Research Data + Hurricane Katrina Impacted Louisiana Cases, Nov 2014 Sub (1973-2012 varying)“] was selected for the study. The National Cancer Institute’s SEER*Stat software (Version 8.2.1) was used for the identity of patients. The inclusion criteria contained: (1) primary sited in brain (Site recode ICD-O-3/WHO 2008: 63); (2) with a confirmed diagnosis (Diagnostic Confirmation: Positive histology), (3) central neurocytoma (Histologic Type ICD-O-3: 9506) based on the International Classification of Diseases for Oncology, 3rd Edition (ICD-O-3), (4) being diognosed between 2004 and 2012. And the exclusion criteria contained: (1) unknown age, race; (2) with a surgery status of “Recommended, unknown if performed“. Survival data were extracted at 1-month intervals for a follow-up between 3 months and 96 months.

This study based on public data from the SEER database. The reference number obtained for the permission to access research data files was 10612-Nov2014. No human subjects or personal identifying information were used in this study. No informed consent was require in this study.

The enrolled population was divided into two groups based on different pathology: central neurocytoma (CN group) and not central neurocytoma (NCN group). Chi-square test was used for the difference analysis between the two groups. Univariate analyses with log-rank test and multivariate analysis with cox proportional hazards regression model were performed to explore the clinical prognosis factors of CN, with a statistically significant difference at the value of p < 0.05. All analysis were performed with survival [42] and ggplot2 [43] package of R (version 3.2.3) [44].

Thanks are due to Guangzhou Tao, Tao Li, Changhua Yu, Xilei Zhou, Peng Pan, Jin Peng, Dongcheng He, and Fuzhi Ji for their assistance with literature research of this paper.