Acute kidney injury (AKI) is a deterioration of renal function over a period of hours to days [1, 2]. It will cause severe morbidity if not handled properly [1, 2]. Ischemic-hypoxia injury is the major pathological mechanism of AKI [1-4]. Hypoxia-inducible factor-1α (HIF-1α) is a key regulator in adaptation to low oxygen availability [3-5]. It promotes the transcription of many genes involved in cellular and systemic responses to hypoxia [5, 6]. Under normoxia, HIF-1α is degraded by the prolyl-4-hydroxylase domain (PHD) family proteins, which require di-oxygen and 2-oxoglutarate as co-substrates [7].

Thus far three different PHDs have been identified, including PHD1, PHD2, and PHD3 [4, 8]. PHDs have different but sometime overlapping functions. PHD2 is the critical oxygen sensor of HIF-1α in normoxia and hypoxia [8, 9]. The characteristics of theses enzymes provide potential targets for small molecule manipulation, which could activate HIF in the presence of normoxia. For example, cobalt chloride (CoCl2) and other iron chelators have been applied to activate HIFs [10, 11]. Existing evidences have shown that enhancing HIF via PHD inhibition could protect against ischemic injuries [11, 12].

Autophagy occurs at basal level in most tissues and contributes to the routine turnover of cytoplasmic components [14, 15]. However, autophagy can also be induced by nutrient deprivation or starvation [14, 15]. In addition to turnover of cellular components, autophagy is also essential for cell homeostasis [16], as well as cell adaptation and defense to adverse environments [17, 18]. Studies have highlighted the importance of autophagy in normal proximal tubule function and recovery from acute ischemic injuries [19-21]. Paradoxically, chronic activation of autophagy may also promote cell damage [19-21].

In the study, we employed the human renal proximal tubular epithelial cell line HK-2, as well as a mouse model of renal ischemia-reperfusion injury to explore the potential function of PHD2 in the process.

CoCl2 mimics the hypoxic condition and has been validated as a simple tool to examine the molecular mechanisms driven by hypoxia in vitro [10]. As shown in Figure 1, protein and mRNA expressions of HIF-1α and HIF-2α were low under normoxic conditions. After CoCl2 treatment, there was a time-dependent increase of HIF-1/2α expression at the mRNA level (Figure 1A). A similar pattern of protein expression was observed by Western blot assay (Figure 1B). The protein expression of HIF-1α and HIF-2α both significantly increased, starting from 12h (P < 0.05 vs. “0h”) (Figure 1B). Whereas HIF-1α and HIF-2α mRNA expressions were induced at later periods (starting from 24h) (Figure 1A). The protein and mRNA levels of HIF-1α reached the peak at 36h (P < 0.01 vs. “0h”), which then declined (Figure 1A). The protein expression of PHD2 gradually increased after exposure to CoCl2, reaching the peak at 48h (Figure 1B). While the PHD2 mRNA level reached its peak at 24h (P < 0.01 vs. “0h”) (Figure 1A). 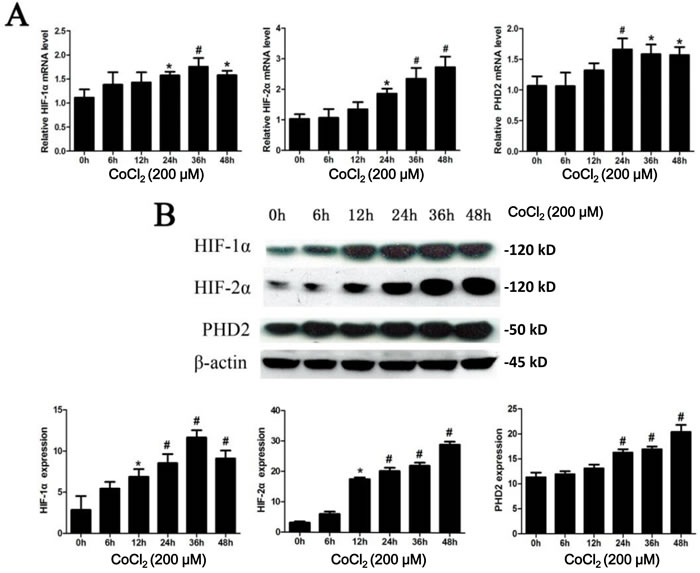 Next, we tested the expression of Bcl-xL, a known HIF-1α-regulaed gene [22], in CoCl2-treated HK-2 cells. As shown in Figure 2, the protein expression of Bcl-xL was increased after CoCl2 treatment. It level was peaked at 12-24h and was then declined afterwards (Figure 2). We also analyzed the apoptotic response of HK-2 cells to CoCl2. Western blot results in Figure 2 showed that CoCl2 up-regulated the pro-apoptotic Bax [23, 24] in HK-2 cells (Figure 2), suggesting apoptosis activation.

To test whether autophagy could be induced after hypoxia treatment, we investigated the expression of LC3-II, whose upregulation is considered as the characteristic marker of autophagy [25]. CoCl2 induced a significant accumulation of LC3 in HK-2 cells. Upregulation of LC3-II was most significant at 12h (P < 0.01 vs. “0h”) after CoCl2 treatment (Figure 2). And its level was then decreased thereafter (Figure 2). We further examined CoCl2-induced autophagy in HK-2 cells by transmission electron microscope (TEM) (Figure 3). As shown in the representative micrographs, autophagosomes, with characteristic features of double or multiple membranes, began to appear 6h after CoCl2 treatment in the HK-2 cells (Figure 3). They were observed up to 48h after treatment of CoCl2 (Figure 3). These results indicate that CoCl2 activates autophagy in HK-2 cells. 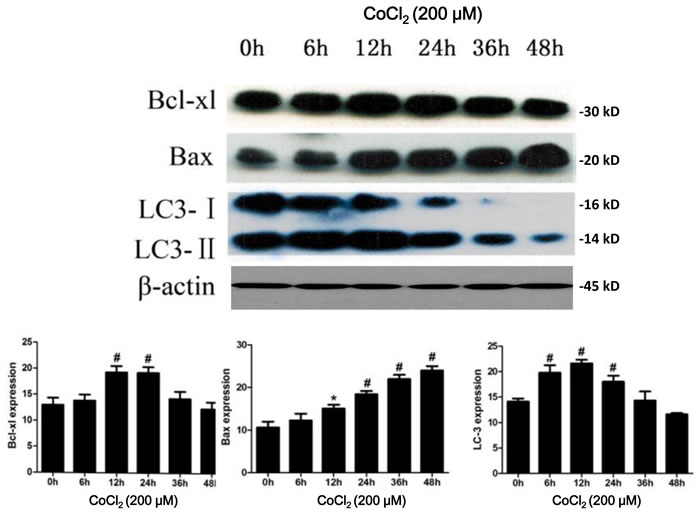 To explore the role of autophagy in CoCl2-induced HK-2 cell death, pharmacological strategy was applied. One hour prior to the CoCl2 treatment, we exposed cells to 3-methyladenine (3-MA), which is a selective inhibitor of the autophagy [26]. As shown in Figure 4A and 4B, 3-MA decreased the LC3II/LC3I ratio and increased cell viability compared to the CoCl2 only group (24.91±1.59 vs. 29.6±2.79, P < 0.01). Further, CoCl2-induced HK-2 cell apoptosis, tested by ssDNA ELISA assay, was also attenuated by the pretreatment of 3-MA (Supplementary Figure 1A). Additionally, under electron microscopy, the number of autophagosomes decreased and the cell ultrastructure appeared relatively normal (Figure 4C). These results suggested that the autophagic process may be harmful to human renal tubular epithelial cells during CoCl2-induced hypoxia. 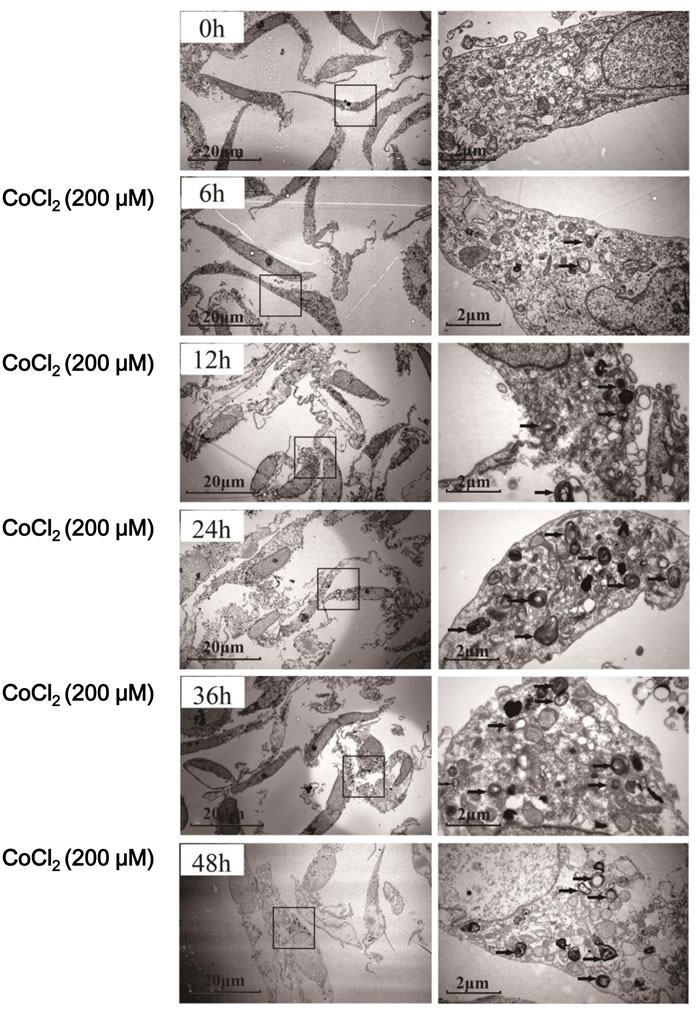 Figure 3: Autophagosome formation in CoCl2-treated HK-2 cells. HK-2 cells were incubated with 200 μM CoCl2 for 0-48 h. The cells were then fixed and processed for electron microscopy. Autophagosomes (black arrows) with characteristic double or multiple membranes were identified. Experiments in this figure were repeated four times, and similar results were obtained.

PHD2 is the critical oxygen sensor of HIF-1α [8, 9]. In order to determine the role of PHD2 in autophagy during CoCl2 treatment, small interference RNA (siRNA) strategy was applied to knockdown PHD2 in HK-2 cells. Following PHD2 siRNA transfection, mRNA and protein expression of PHD2 decreased by 79% (3.13±0.25 vs. 0.66±0.11, P < 0.01) and 61% (11.00 ± 1.00 vs. 4.32 ± 0.80, P < 0.01) respectively (Figure 5A and 5B). HIF-1α protein level was increased by 27% (9.57±0.72 vs. 12 ±0.42, P < 0.01) (Figure 5B). Yet, there was little change on HIF-2α expression in the same condition (Figure 5B). Intriguingly, PHD2 siRNA up-regulated Bcl-xL, whiling downregulation Bax in HK-2 cells (Figure 5B). Further, Western blot assay revealed that the pattern of LC3II/LC3I expression in the PHD2 siRNA cells was consistent with the 3-MA-treated cells. PHD2 siRNA decreased LC3II expression in CoCl2-treated HK-2 cells (Figure 5B). We also studied the influence of silencing PHD2 on cell viability under hypoxia. As shown in Figure 5C, PHD2 siRNA protected HK-2 cells from CoCl2 insults (cell viability, 28.32 ±2.41 vs. 37.04±3.25, P < 0.01). Meanwhile, CoCl2-induced HK-2 cell apoptosis was also inhibited by PHD2 siRNA (Supplementary Figure 1B).These results demonstrate that, in CoCl2-treated HK-2 cells, PHD2 silencing facilitates HIF-1α expression, and exerts cyto-protective effect possibly via inhibiting apoptosis and autophagy. In line with these findings, we showed that L-mimosine (L-Mim), a non-selective PHD inhibitor [27], also inhibited CoCl2-induced viability reduction (Supplementary Figure 1C) and apoptosis activation (Supplementary Figure 1D) in HK-2 cells. 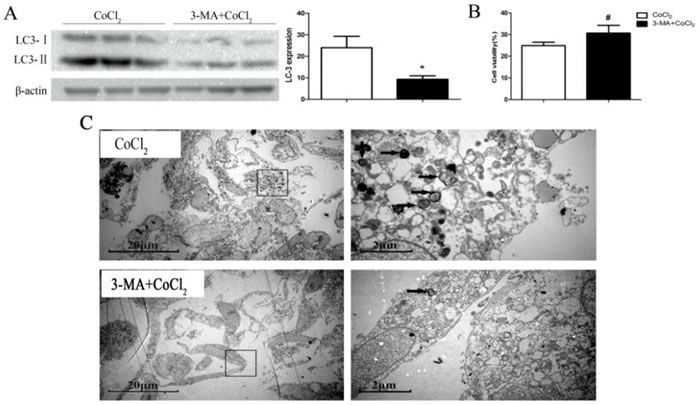 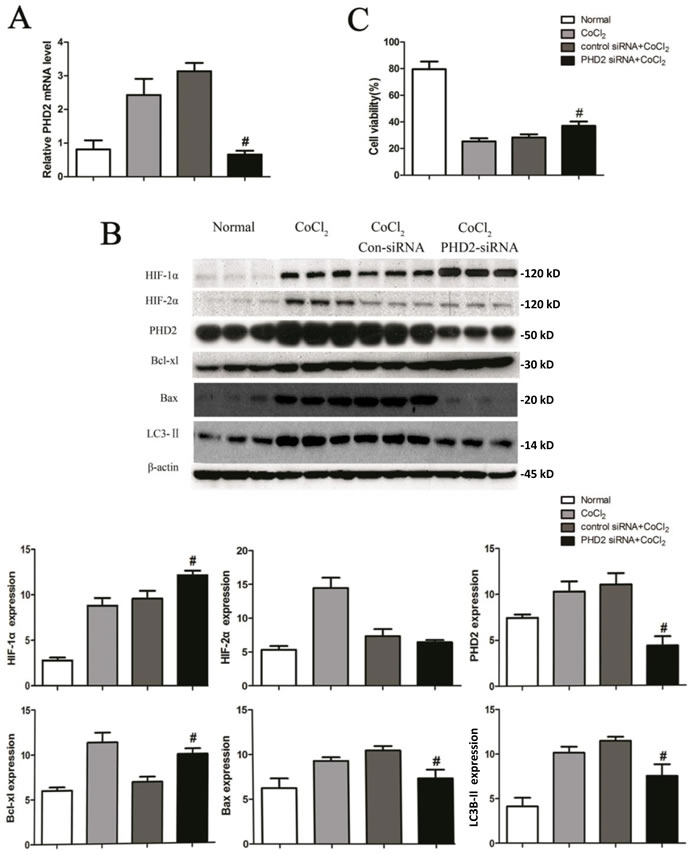 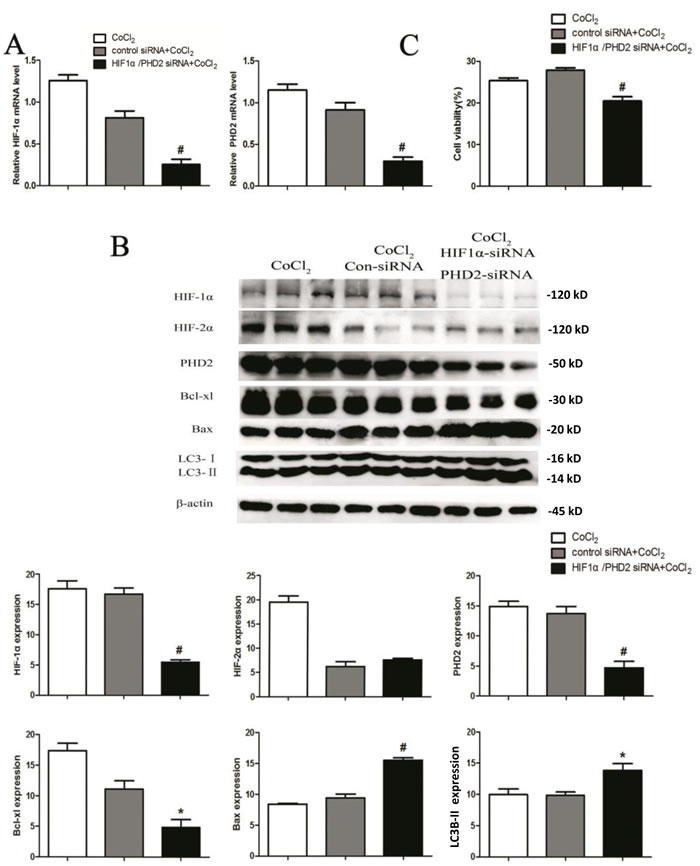 To study the role of PHD2 in vivo, we applied a non-selective PHD inhibitor L-mimosine. Animals in the L-mimosine group (50mg/kg body, 6h before surgery) showed improved renal function compared to those in the vehicle group, and the serum level of creatinine was dramatically decreased in L-mimosine-treated mice (Figure 7A). Histological examinations revealed significant tubular damage and a high injury score in the injured kidney 24h after surgery, which were largely inhibited by L-mimosine pretreatment. (Figure 7B). 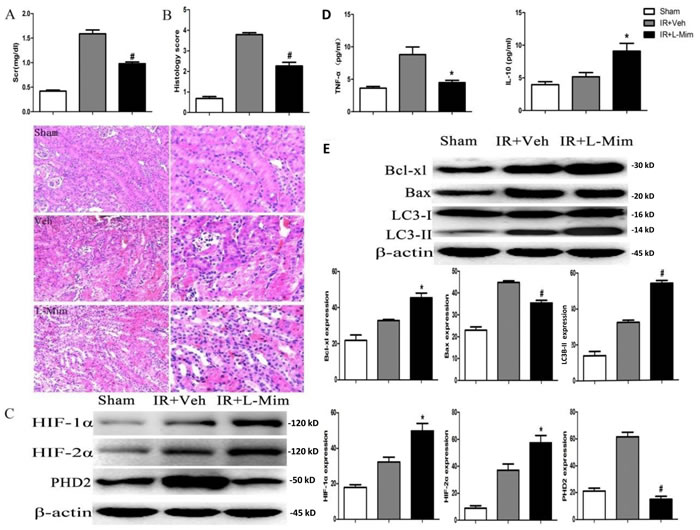 Autophagy could be cell detrimental or cytoprotective depending on the stimuli that provoked it. It is still largely unknown what mechanisms determine the final outcomes [14-16]. Here, we observed that CoCl2 activated autophagy in HK-2 cells. On the other hand, 3-MA, the autophagy inhibitor, blocked autophagy and protected HK-2 cells from CoCl2. These results indicate that the autophagic pathway may act as a detrimental factor in the CoCl2 hypoxic model at least in vitro, although more detailed studies are still needed.

Interestingly, our in vivo results demonstrated that autophagy induction was accompanied with improved kidney functions. These results indicated that autophagy may play a protective role against kidney ischemia reperfusion injuries. These in vivo results are consistent with other studies [28, 29]. The mechanisms underlying the pro-survival effect of autophagy remain largely unknown [28, 30]. In the process of renal ischemia reperfusion injury, autophagy activation was shown to eliminate damaged mitochondria and prevent accumulation of aggregate-prone proteins [28, 29]. The rapid increased number of research publications on autophagy and hypoxia will lead to a better understanding the mechanisms involved.

Collectively, the results of our study suggest that activating HIF, i.e. via inhibiting PHD, may be a useful therapeutic strategy in ischemic renal injury.

For cell viability assessment, 10 µL of Alamar Blue (Kaiji, Nanjing, China) was added to each well and the plates were incubated at 37°C and 5% CO2 for 2h. The absorbance was measured by using a Synergy HT multi-detection microplate reader (Bio-Tek, Winooski, VT) at a test wavelength of 570 nm.

DNA denature is an important characteristic marker of cell apoptosis. Following the treatment of cells, denatured ssDNA was detected through a nucleosomal monoclonal antibody in an ELISA format. Briefly, cells (1×104/well) were seeded onto 96-well plates. Cell apoptosis was analyzed by the ssDNA ELISA kit from Chemicon International (Temecula, CA, Catalog Number: 1217). OD value at 450 nm was utilized as a quantitative indicator of cell apoptosis.

Cells were grown in T25 flasks and fixed for 4h in 2.5% glutaraldehyde fixative in phosphate buffer at 4°C. After fixation, cell monolayers were placed in glutaraldehyde wash solution and then post-fixed in Millonigs Osmium Tetroxide fixative for 15-30 minutes. The cultures were dehydrated through a graded series of 10% to 100% ethanol, infiltrated, and then embedded in TAAB Premix Resin medium. Ultrathin sections were collected on copper grids and stained with uranyl acetate and lead citrate. Sections were viewed using a Hitachi H7600 transmission electron microscope (TEM).

Experiments were performed on 6-8 week male C57BL/6J mice weighing 20-22 g (from Animal Center of Fudan University, Shanghai, China). Animals were housed in temperature- and humidity-controlled cages, with free access to water and rodent food on a 12-h light/dark cycle. All protocols were approved by the Institutional Animal Care and Use Committee of Fudan University, and adhered strictly to the NIH Guide for the Care and Use of Laboratory Animals. All surgery was performed under sodium pentobarbital anesthesia, and efforts were made to minimize suffering. L-mimosine (L-Mim, Sigma, Dorset, UK) was resolved in 10% NaHCO3 at a concentration of 15 mg/mL (adjusted pH to 7.4 by HCl plus PBS) and administered intraperitoneally at 50 mg/kg, 6h before renal ischemia reperfusion injury surgery.

Blood samples were obtained at time of sacrifice for measurement of serum creatinine (Scr). Scr level was determined using the Quantichrom Creatinine Assay Kit (DICT-500, Universal Biologicals, Shanghai, China), following the manufacturer’s protocol. Kidney slices were embedded in paraffin wax, sectioned at 4 μm and stained with hematoxylin and eosin (HE) with standard methods. Histopathological scoring was performed in a blinded manner by a pathologist without knowing the experimental protocol. Severity of tubular injury was scored on a semi-quantitative scale: “0” = normal, “1” = 10-25%, “2” = 26-50%, “3” = 51-75%, and “4” = >75%. At least 10 consecutive fields in the corticomedullary junction and outer medulla were examined under × 400 magnification (Lecia, DM6000 B, Germany).

The levels of pro-inflammatory factor tumor necrosis factor-α (TNF-α) and anti-inflammatory cytokine Interleukin-10 (IL-10) were measured by ELISA (MBS495354 for TNF-α, and MBS288580 for IL-10, BioSource, Shanghai, China). Photometric measurements were conducted at 450 nm via a microplate reader (Bio-Rad).

This work was supported by the Projects of Science and Technology. Commission of Shanghai Municipality (14DZ2260200, the project of Shanghai Key Laboratory of Kidney and Blood Purification) and National Natural Science Foundation of China(81430015, 81270779).