Radiation-induced genomic instability (RIGI), a common long-term complication resulting from exposure to ionizing radiation [1], is characterized by an increase in genomic alterations in the progeny of irradiated cells that are associated with karyotypic abnormalities, gene mutation and amplification, cellular transformation, clonal heterogeneity, and delayed reproductive cell death [2]. Currently, the mechanisms underlying RIGI are unknown [3-7], although genomic instability plays a crucial role in radiation-induced carcinogenesis. Therefore, investigations of RIGI may identify important processes that promote radiation-induced carcinogenesis [8] and improve radiotherapy treatments for cancer patients.

MicroRNAs (miRNAs) are an important class of conserved, small noncoding RNAs that target the 3’-UTRs of target mRNAs to repress mRNA expression post-transcriptionally or promote mRNA degradation [11–14]. miRNAs play crucial regulatory roles in a wide range of biological processes, including proliferation, differentiation, apoptosis, and cell mobility [15, 16], as well as carcinogenesis, in which they alter the expression of oncogenes and tumor suppressor genes [17]. For example, miR-142-3p, which acts as a tumor suppressor, is down-regulated in many different cancers [18-20]. Tang et al. recently found that miR-142-3p expression was lower in cervical carcinoma cells than in normal cervical epithelium cells [21], and Deng et al. reported that miR-142-3p inhibits cervical cancer cell proliferation and invasion by targeting frizzled class receptor 7 (FZD7) [14]. MiR-142-3p also inhibits cancer cell proliferation and induces cell cycle arrest in the G2/M phase by targeting CDC25C [22]. However, the biological functions of miR-142-3p remain largely unknown, especially with regard to cellular radiation responses. Bioinformatics predictions (Target Scan and microRNA.org) suggest that miR-142-3p targets the Bod1 gene. Whether miR-142-3p expression is altered by irradiation, and whether it targets Bod1 to induce chromosomal aberrations after irradiation, remains unknown.

Radiation induces premature chromatid separation in 786-O and A549 cells 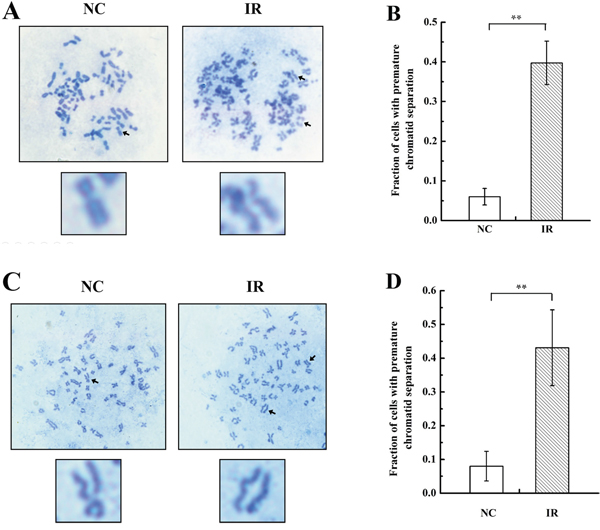 Because Bod1 depletion causes premature chromatid separation [10], we investigated whether Bod1 was involved in cellular radiation response. The online bioinformatics databases Target Scan (http://www.targetscan.org/) and microRNA.org (http://www.microrna.org/) predicted that Bod1 is a potential target of miR-142-3p. To identify whether both miR-142-3p and Bod1 were involved in the biological effects of irradiation, we measured mature miR-142-3p and Bod1 expression in 786-O cells exposed to X-rays using quantitative RT-PCR (qRT-PCR). As shown in Figure 2A, miR-142-3p expression increased 1 h after irradiation, reached a peak at 4 h, decreased at 8 h, and returned to baseline at 48 h. Meanwhile, Bod1 mRNA expression decreased from 1 h to 4 h after irradiation and then gradually returned to baseline. We then examined Bod1 protein levels in cells after irradiation in a western blot assay. Bod1 protein levels decreased from 1 h to 4 h after exposure to 4 Gy X-rays but increased at the 8 h and 12 h time points (Figure 2B, 2C). These results suggest that radiation affects both miR-142-3p and Bod1 expression, and that miR-142-3p also regulates Bod1 expression. 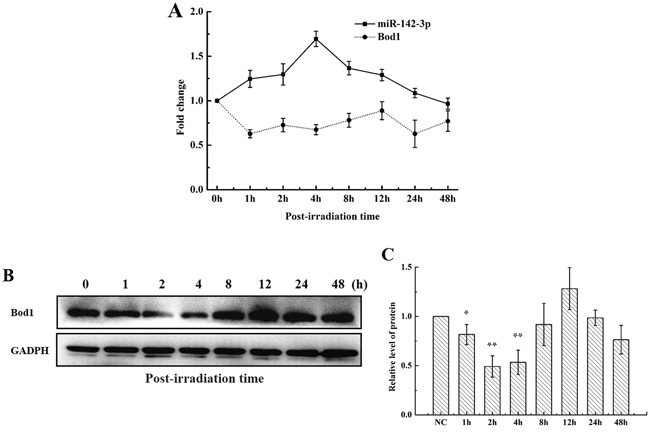 Cells were co-transfected with miR-142-3p mimics and dual-luciferase reporter vector to confirm the target prediction results. Bod1 wild-type 3’-UTR luciferase activity, but not Bod1 3’-UTR-mut activity, decreased in 786-O cells after miR-142-3p transfection (Figure 3B). qRT-PCR and western blot confirmed that Bod1 mRNA and protein levels decreased 48 h after transfection with miR-142-3p in 786-O cells and A549 cells (Figure 3C and 3D). These results indicate that miR-142-3p directly inhibits Bod1 expression by targeting the 3’-UTR of Bod1 mRNA. 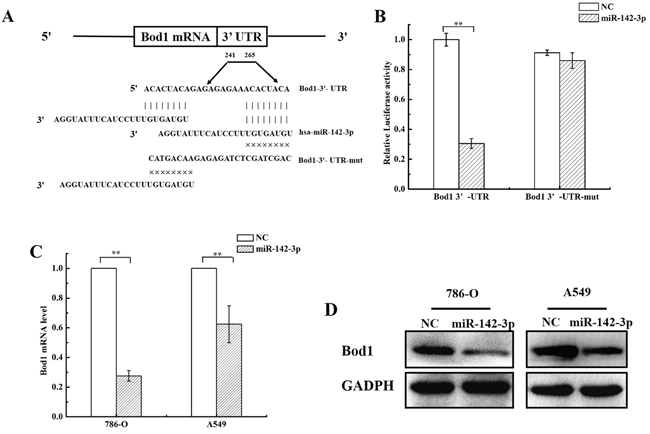 Figure 3: MiR-142-3p targets the Bod1 3’-UTR and suppresses its expression. A. The putative miR-142-3p binding site in the human Bod1 3’-UTR is shown at the top. The mature miR-142-3p sequence is shown aligned to the target site, and the mutated miR-142-3p seed-pairing sequence is shown below. B. Luciferase reporter assays were performed 24 h after 786-O cells were co-transfected with Wt Bod1 or Mut Bod1 vectors together with miR-142-3p mimics or nonsense small RNA oligonucleotides as the negative control. C. Relative Bod1 mRNA expression was measured by qRT-PCR after 786-O and A549 cells were transfected with miR-142-3p or negative control (NC). U6 and GAPDH were used as internal controls. D. Bod1 protein levels were measured in 786-O in A549 cells by western blot after transfection with miR-142-3p or negative control (NC). Each data point represents the mean of three separate experiments; bars indicate standard errors. **P < 0.01. 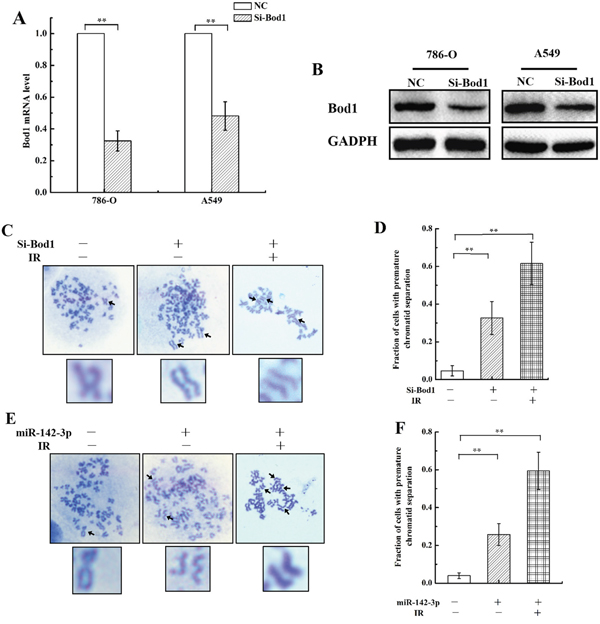 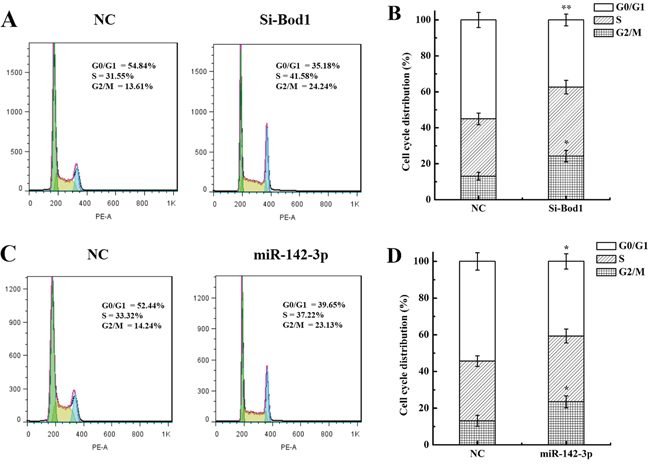 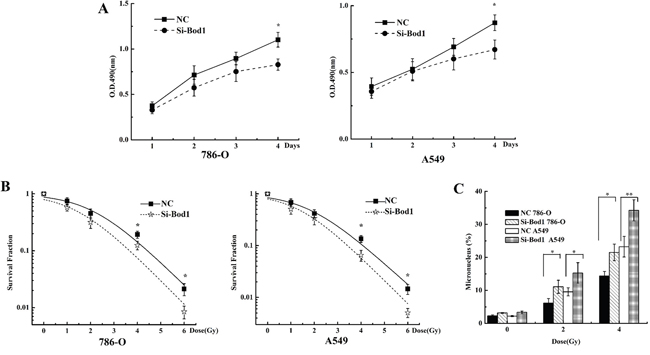 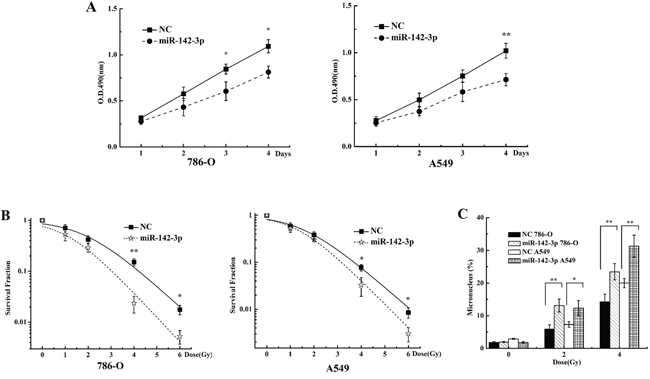 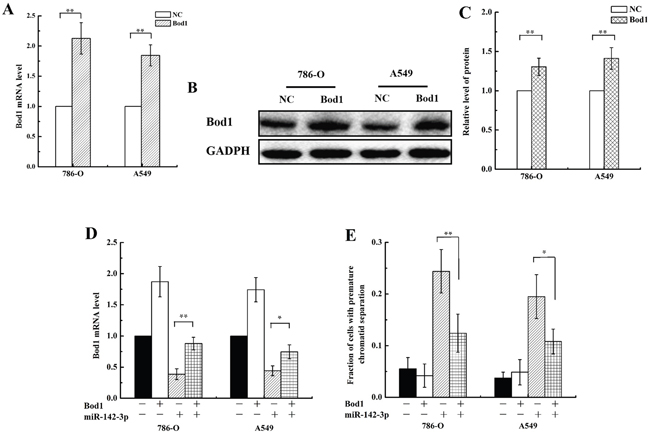 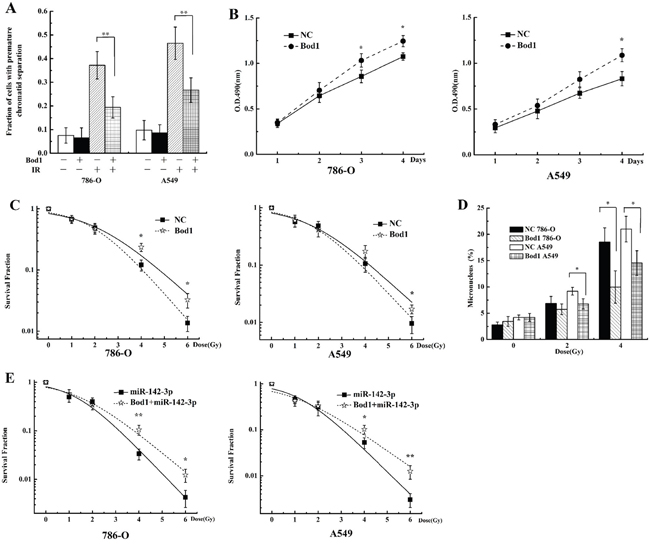 Proper timing of separation is crucial for balanced chromosome segregation. A cohesin complex maintains connections between sister chromatids until anaphase begins [25-27]. Impaired centromeric cohesion results in premature separation of sister chromatids before anaphase and is associated with aneuploidy [25, 28]. Mutations in genes essential for chromatid cohesion, including Bod1, budding uninhibited by benzimidazoles 1 homolog (Bub1), establishment of cohesion 1 homolog 2 (ESCO2), and nipped-b homolog (NIPBL)/Adherin, all of which are involved in the spindle assembly checkpoint [9, 29-32], result in increased premature chromatid separation.

We found that radiation increased premature chromatid separation in 786-O and A549 cells compared to un-irradiated cells, and western blots and chromosome spread scores confirmed that Bod1 was involved in this effect (Figure 2). Porter et al. reported that Bod1 is necessary for the regulation of PP2A activity and Plk1 at the kinetochore and for establishing and maintaining chromatid cohesion [10]. Inhibition of PP2A has antitumor effects in different human cancer cell types [33, 34] and sensitizes nasopharyngeal carcinoma xenografts to radiation by dysregulating mitosis and blocking DNA damage repair [35]. PP2A inhibition-induced sensitization to radiation and chemotherapy in cancer cells is believed to occur via several mechanisms, including sustained phosphorylation of Akt, MDM2, Plk1, TCTP and Cdk1, which are involved in apoptosis, cell cycle deregulation, and inhibition of DNA repair [36-38]. Lv et al. reported that inhibition of PP2A increases intracellular p-Plk1, TCTP, and Cdk1 levels and decreases p53 levels, ultimately increasing cell cycle arrest, aberrant mitosis, and radiation-induced inhibition of cell proliferation [24]. These studies together with our results suggest that radiation decreases Bod1 expression and in turn suppress the PP2A/Plk1 pathway. Premature chromatid separation may cause cell cycle arrest and other phenomena involving the miR-142-3p/Bod1/PP2A/PLK1 pathway; future experiments are needed to investigate this possibility.

Renal cell carcinoma, a lethal urologic malignancy that originates in renal tubular epithelial cells, comprises approximately 90% of all kidney cancers and accounts for 2-3% of all cancers worldwide [46, 47]; lung cancer is the second most common type of cancer worldwide, with approximately 1.6 million new cases diagnosed each year, and the leading cause of cancer-related death, estimated at 1.37 million annually [48, 49]. Radiotherapy is a crucial component of treatment for these and most other types of cancer, and treatments that increase radiosensitivity in resistant tumor cells would help improve the efficacy of radiotherapy [50, 51]. Because 786-O and A549 cells are resistant to radiation [52, 53], research employing these two cell lines may be particularly helpful in identifying the molecular mechanisms underlying response to radiation and in developing more effective radiotherapies.

miRNAs increase the sensitivity of tumors to radiotherapy by increasing cell cycle arrest [51, 54], and genes that regulate cell cycle progression are important for sensitization to radiation [55-58]. In addition, irradiation alters miRNA expression, suggesting that miRNAs play important roles in irradiation-induced DNA damage and repair [59]. MiR-142-3p specifically might increase radiosensitivity in cells by modulating the expression of its target genes. Our results show that miR-142-3p induced premature chromatid separation by suppressing Bod1 expression, and thus increased sensitivity of 786-O and A549 cells to radiation (Figures 6 and 7). Bod1 overexpression inhibited both radiation- and miR-142-3p-induced premature chromatid separation, which increased resistance to radiation in 786-O and A549 cells. These results might aid in the development of novel therapeutic strategies that use both ionizing radiation and drugs targeting epigenetic mechanisms in carcinoma patients.

In summary, we found that radiation induces premature chromatid separation via the miR-142-3p/Bod1 signaling pathway in 786-O and A549 cells; this mechanism, which involves interactions between epigenetic regulation and radiation response, may be an early contributor to the development of RIGI. Furthermore, we found that irradiation altered miR-142-3p/Bod1 signaling pathway activity, and either knockdown of Bod1 or overexpression of miR-142-3p sensitized 786-O and A549 cells to irradiation. Although the molecular mechanisms underlying premature chromatid separation are not fully understood, our results suggest that epigenetic modifications contribute to early RIGI processes.

X-ray irradiation was conducted at a Faxitron RX-650 facility (Faxitron Bioptics, USA) at 100 kVp and 5 mA at room temperature. The target of this instrument is wolframium (W), and the dose was 0.97 Gy/min.

Chromosome spreads were performed as previously described [60]. Briefly, 24 h after transfection or irradiation, cells were incubated with 100 ng/mL colchicine for 4 h. Following a gentle mitotic shake-off, cells were trypsinized, washed with PBS buffer, incubated in 10 mL KCl (0.075 M) at 37°C for 10 min, centrifuged, and fixed in 10 mL fresh Carnoy’s fluid (3:1 methanol:acetic acid) for 30 min. The fixed cells were dropped onto 37°C preheated coverslips and dried until grainy. Chromosomal spreads were stained using Giemsa (Solarbio, China). Analyses were performed with an optical microscope (Olympus, Japan) at 100× magnification. At least 50 cell spreads were scored for each sample. The experiment was repeated at least three times.

The 3’-UTR of Bod1 containing the putative miR-142-3p binding site was PCR-amplified from normal human cDNA, and the mutant construct was generated by mutating the miR-142-3p seed sequence (from ACACUACA to CATGACAA and CGATCGAC). The wild-type and mutant Bod1 3’-UTRs were cloned into the psiCHECK2 luciferase vector (Promega, USA). The constructs were verified by DNA sequencing.

For cell cycle analysis, transfected cells in the logarithmic growth phase were harvested by trypsinization 48 h post-transfection, washed with PBS twice, fixed in 70% ethanol overnight at 4°C, pelleted, resuspended in PBS at 1 × 106 cells/mL, incubated with 100 μg/mL DNase-free RNase A and 0.2% Triton X-100, and stained with 50 μg/mL PI (Sigma, USA) at 4°C for 30 min. A total of 104 nuclei were examined with a BD LSRFortessa™ cell analyzer (BD Biosciences) and DNA histograms were analyzed using Flowjo software. The experiment was repeated at least three times.

Cell proliferation was measured using a 3-(4, 5-dimethylthiazol-2-yl)-2, 5-diphenyltetrazolium bromide (MTT) assay. Cells were seeded in 35-mm dishes 24 h before transfection with miRNA-142-3p, siBod1, or both Bod1 vector and miRNA-142-3p. The transfected cells were trypsinized and plated in a 96-well microplate at a density of 2×103 cells/well 24 h after transfection. 24 h later, cells were exposed to X-rays at a dose of 4 Gy. MTT solution (0.5 mg/mL) was added to each well at different time points (1, 2, 3, 4 d) after radiation. After incubation at 37°C for 4 h, cell-free supernatant was removed and the resulting formazan crystals were dissolved in 200 μL of DMSO. Absorbance was measured at 490 nm with a microplate reader. All experimental treatments were repeated in five wells each. The experiment was repeated at least three times.

After irradiation, cells were washed with PBS buffer, trypsinized, and counted using a cell counter (Coulter). An appropriate number of cells were plated into 60-mm dishes to produce colonies. After incubating for 10 d, the cells were fixed with 10 mL fresh Carnoy’s fluid and stained with 0.5% crystal violet for 20 min. Colonies with more than 50 remaining cells were counted as survivors. Plating efficiencies (PE) were calculated as follows: number of colonies formed/number of cells plated. Survival ratios were calculated as follows: PE (irradiated)/PE (un-irradiated). All experiments were performed in triplicate and repeated at least three times.

48 h after radiation, cells were fixed with Carnoy’s fluid for 20 min at room temperature and stained with 20 μL of Acridine Orange in an aqueous solution (10 μg/mL). Analyses were performed with a fluorescence microscope (Axio Imager Z2) at 20× magnification. At least 500 cells were scored for each sample. The experiment was repeated at least three times.

This study was supported by the National Natural Science Foundation of China [U1432121, 31170803] and the National Key Scientific Instrument and Equipment Development Project of China [2012YQ03014210].