Sex steroid hormones are critical for the development and progression of breast cancer. Estrogen is widely recognized for its role in breast cancer, while little is known about the potential role for androgen in this disease. Endocrine therapies that target estrogen and estrogen receptor (ER) have led to significant progress in the treatment and prevention of the majority of breast cancer patients. While in contrast to ER positive(ER+) breast cancer, there are currently limited knowledge available regarding the biology of ER negative(ER−) breast tumors [1]. Therapies targeting Her2 such as trastuzumab are becoming increasingly important in the treatment of Her2+ tumors. Nevertheless, there are significant numbers of breast tumors fail to respond. Recent studies have found that androgen receptor (AR) is highly expressed in ER-/Her2+ breast tumors and androgens and AR stimulate the growth of ER−/Her2+ breast cancer cells by activating oncogenic Wnt signaling pathways [2].

In recent years, the highly conserved RNA-binding protein Lin28A has emerged as factors that increased the self-renewal of mammalian embryonic stem cells [3]. Lin28A has been shown overexpressed in diverse human malignancies [4, 5] and promoted tumorigenesis and proliferation of cancer cells [6–8]. Lin28A can increase AR expression and its target genes such as PSA and NKX3.1 and enhances growth of human CaP cells [9]. However, similar studies concerning the impact of Lin28A on expression of the AR in human breast cancer have not been reported previously. Lin28A also is a master regulator of let-7 miRNA processing, binds to the terminal loops of the precursors of let-7 family miRNAs and blocks their processing into mature miRNAs [10, 11]. Lin28A also increases c-myc by repressing let-7, and c-myc transcriptionally activates Lin28A [12]. 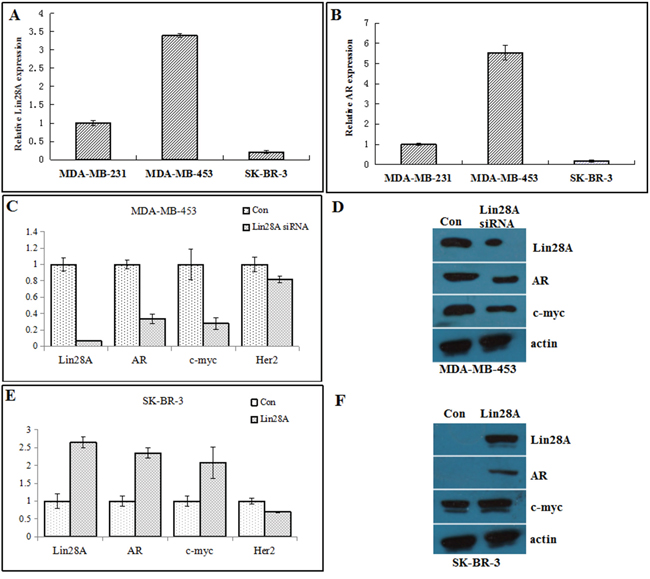 Promotion of AR by Lin28A is mediated by c-myc

To examine whether Lin28A affects transcription of AR, Lin28AsiRNA or Lin28A plasmid were cotransfected with a luciferase reporter driven by the full-length promoter of the AR gene into MDA-MB-453 cells or SK-BR-3 cells, respectively, and luciferase assays were performed. Down-regulation of Lin28A expression by Lin28AsiRNA decreased, whereas overexpression of Lin28A increased, the activation of the AR promoter (Figure 2A, 2B), suggesting that promotion of AR expression by Lin28A may be at the level of transcription. 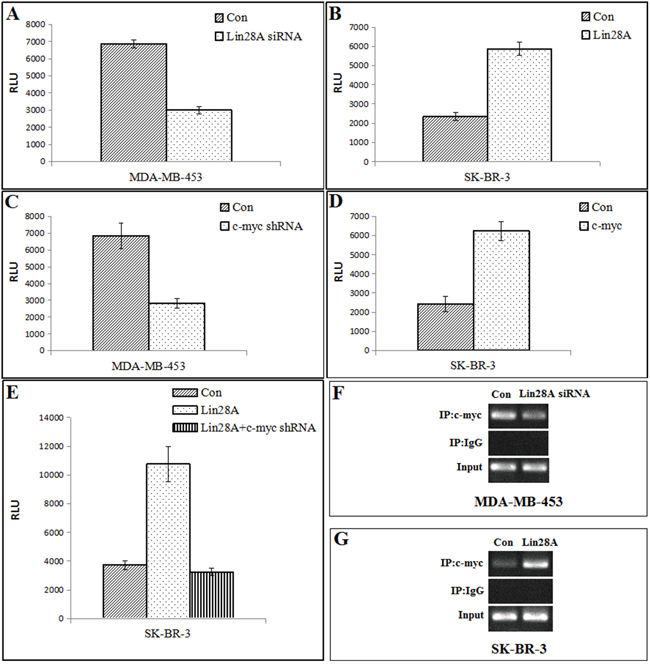 Because c-myc, which activates AR transcription by binding to a consensus element in the AR promoter [14], was one of the targets of let-7c, and Lin28A can binds to the terminal loops of the precursors of let-7 family miRNAs and blocks their processing into mature miRNAs, we hypothesized that a let-7c target gene(c-myc) may function as a transcriptional regulator of AR. Down-regulation of c-myc by c-myc shRNA reduced AR promoter activity (Figure 2C), whereas overexpression of c-myc enhanced AR promoter activity (Figure 2D).

We next cotransfected Lin28A with c-myc shRNA in SK-BR-3 cells(Lin28A negative type) expressing a luciferase reporter driven by the full-length AR promoter. The results showed that Lin28A increased AR promoter activity, which was reversed by suppression of c-myc (Figure 2E). ChIP assays were performed using primers spanning the consensus binding site for c-myc in the AR promoter to determine whether Lin28A activates the recruitment of c-myc to the promoter of the AR gene. Overexpression of Lin28A increased the recruitment of c-myc to the AR promoter (Figure 2F, 2G). 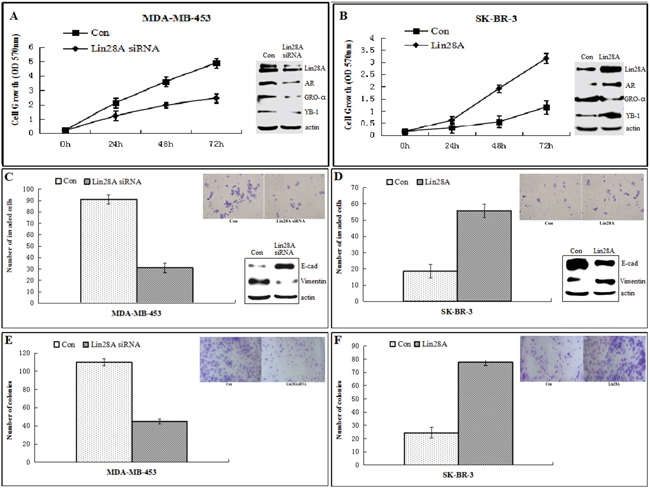 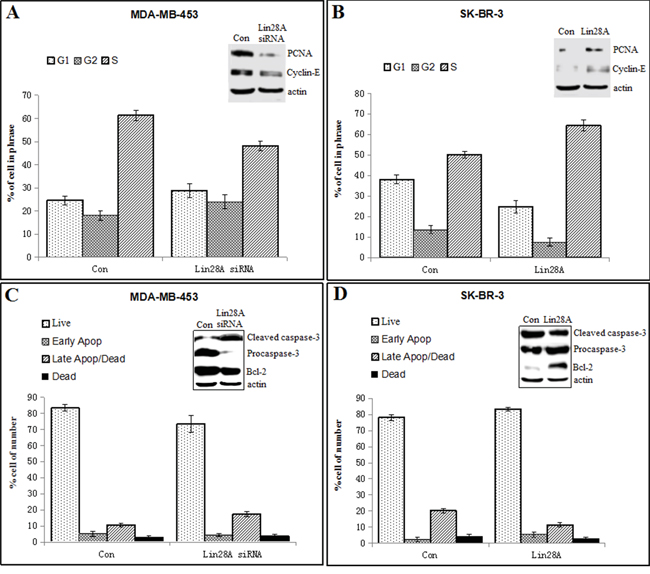 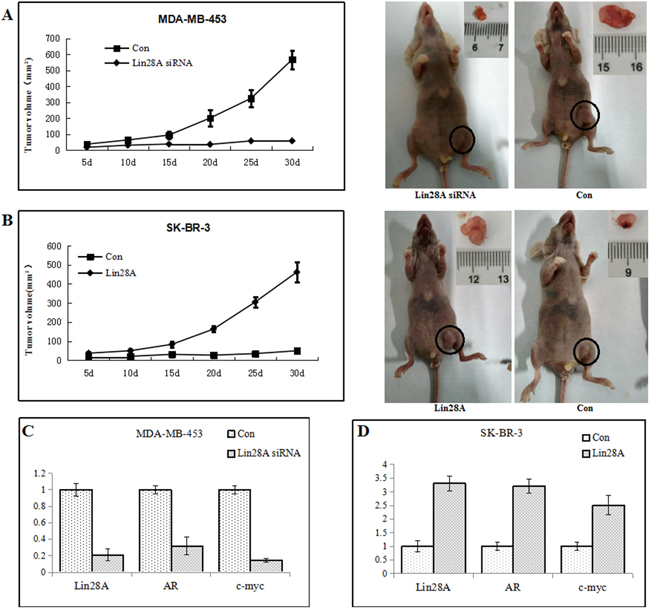 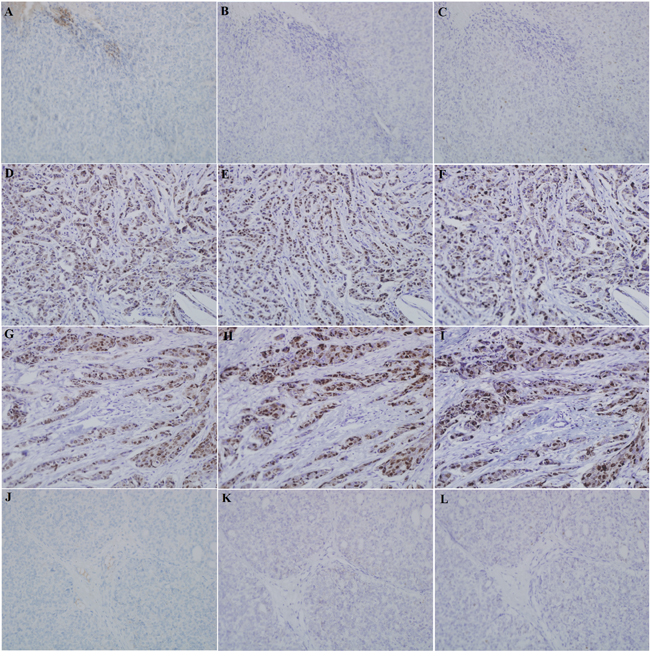 Figure 6: The expression of Lin28A, AR, and Ki67 in xenograft tumor was detected by using immunohistochemistry. Breast cancer cells were inoculated in the left inguinal mammary fat pad of syngeneic Balb/c mice, and the mice were divided into four groups. In mice tumors which injected with MDA-MB-453 cells, Lin28A siRNA group showed downregulation of Lin28A A., AR B. and Ki67 C. expression compared with the control group D, E, F. In mice tumors which injected with SK-BR-3 cells, Lin28A group induced upregulation of Lin28A G., AR H. and Ki67 I. expression compared to the control group J, K, L.

Figure 7: Hematoxylin-eosin staining of mice lungs A. and livers B.

In this study, we found that Lin28A can activates androgen receptor(AR) via regulation of c-myc and promote ER-/Her2+ breast tumor growth. Endocrine therapies that target estrogen and ER signaling pathways play a critical role in the treatment of the majority of breast cancer patients [15]. However, over a quarter of breast tumors fail to express ER and are thus resistant to these therapies [16]. Androgen receptor (AR) is expressed in 60-70% of breast tumors, independent of ER status [17–19]. Our findings suggest that there are a significant number of ER−/Her2+ breast tumors express Lin28A and AR and Lin28A can activate AR expression.

Her-2 gene amplification is long known to contribute to elevated Her-2 protein levels in breast and other cancers [27–28]. Her-2 directed antibody trastuzumab has increasingly been exploited for treating cancers other than breast cancer [29]. However, a substantial proportion of breast cancer patients do not respond to this drug, Targeting Her-2 alone by trastuzumab may, under some conditions, not be sufficient to halt the rapid growth of tumor cells that also express high levels of Lin28A. Our results indicate that, if feasible strategies to reconstitute Lin28A in breast tumors can be developed, reconstitution of Lin28A may become a potential therapeutic agent for breast cancer treatment. The down-regulation of potential oncogenic and survival factors by Lin28A may represent an attractive therapeutic opportunity in human breast cancer. Further studies are required to elucidate the roles of Lin28A and AR network in breast cancers.

Briefly, total RNA was extracted using the Trizol reagent (Takara, Japan) according to the manufacturer’s protocols. Reverse transcription was performed with the SuperScript RT kit (Takara, Japan), and the resultant cDNA templates were subjected to PCR amplification. To verify the level of cDNA integrity, β-actin expression was analyzed as the housekeeping gene in RT-PCR. The primer sets were 5′-TTGTCTTCTACCCTGCCCTCT-3’(forward) and 5′-GAACAAGGGATGGAGGGTTTT-3′ (reverse) for Lin28A, 5’-TTTGCCCATTGACTATTAC TTTCC-3’ (forward) and 5′-TTTCCCTTCAGCGGCTC TTT-3’(reverse) for AR, 5’-ATGCCCCTCAACGTT AGC-3’ (forward) and 5′-AGCTCGCTCTGCTGCTGC -3′ (reverse) for c-myc, 5′-AGCACTGGGGAGTCTTT GTG-3, (forward) and 5’-CTGAATGGGTCGCTTTTGTT -3’(reverse) for Her2, and 5’-AGCGAGCATCCCCCA AAGTT-3’(forward) and 5’-GGGCACGAAGGCTCA TCATT-3’(reverse) for β-actin. The specific reaction process and the calculation method were as mentioned previously [13]. Each sample was performed triplicate independently, and a mean value was used to calculate the mRNA levels.

MDA-MB-453 cells were seeded in culture medium on 24-well plates, serum starved for 24 h. MDA-MB-453 cells were transfected with pGL4-AR-prom-Luc reporters along with plasmids using the Lipofectamie 2000(Invitrogen, USA) as indicated in the figures. After 48 h of transfection, cell lysates were subjected to luciferase assays according to the Dual-Luciferase Reporter Assay protocol (Promega, Madison, WI). Each experiment was repeated in triplicates.

The MTT assay was used to assess proliferative activity. Cells were seeded into 96-well plates at 5×103 per well and incubated overnight under standard culture condition after Lin28A siRNA#2 and Lin28A plasmid transfection. Following incubation for 0, 24, 48 and 72h, 20ul of MTT solution was added to each well and the plates were incubated for another 4h at 37°C, and formazan crystals were dissolved with 150ul of Dimethyl Sulfoxide (DMSO). The absorbance of individual wells was read at 570 nm test wave length using a microplate reader (Bio-Rad Laboratories). Cell proliferation activities of transfected cells were determined by absorbance values.

Boyden chamber invasion assays were performed using the BioCoat Matrigel Invasion Chambers (Becton Dickinson Biosciences, Sparks, MD, USA). Briefly, the transfected cells were harvested and placed in the upper chamber (105 cells per well) in serum-free medium, with complete medium in the lower chamber. After incubation at 37°C for 24 hours, the noninvading cells on the upper surface were scraped off, the invaded cells on the lower surface were fixed and stained. Finally, the number of invaded cells was counted under a microscope in nine random fields (×200).

A total of 1,000 cells were seeded in triplicate into six-well tissue culture plates and cultured at 37°C and 5% CO2 for 14 days. At the end of the experiment, colonies were fixed with methanol, stained with crystal violet, and counted.

The MDA-MB-453 cells transfected with Lin28A siRNA#2 and SK-BR-3 cells transfected with Lin28A were cultured for 48h and harvested. After digestion and centrifugation, the cells were fixed with 500ul of pre-cooling 70% ethanol at 4°C overnight. Then, 300ul of RNase containing propidium iodide (PI) staining solution was added to incubate at room temperature for 30 min. After washing with PBS, the absorbance was measured at 488 nm with flow cytometry.

Detection of apoptosis by flow cytometry

The Annexin V-FITC binding assay was performed to determine the apoptosis rate of cells in vitro. Briefly, cells were seeded in a 6-well plate overnight, harvested 48 hours after treatment, and incubated with 5 microliter Annexin V-FITC and 5 microliter PI for 15 minutes at room temperature in the dark. Apoptosis was detected within 1 h in a flow cytometer. Each experiment was performed 3 times.

Twenty female BALB/c nude mice of 4–6 weeks old and body weight of 20±2 g were housed in specific pathogenfree (SPF) conditions. The BALB/c nude mice were purchased from the Department of Laboratory Animal Science, Peking University Health Science Centre [license number: SCXK (Beijing) 2006–0008]. All the rats were maintained in an environ-mental-controlled room with clean air at 24°C with a 12h light/12h dark cycle. They were fed standard fodder and tap water. The rats were administered an subcutaneous injection of breast cancer cells at a dose of 2×106 per case. Tumors were measured every 5 days, and tumor volume was calculated as: Tumor volume = [32].

All the rats were sacrificed after 30 days and the masses were resected. Livers and lungs were dissected immediately for further histopathological analysis. Liver and lung sections were stained with hematoxylin-eosin and examined blindly by two independent pathologists under light microscopy.

All the rat tumors were paraffin-embedded, cut into 4-um serial sections. The expression status of Lin28A, AR and Ki67 were determined by immunohistochemistry (IHC). IHC was performed using standard procedures. The expression level of Lin28A and AR was categorised as previously described [10]. Ki67 status was expressed in terms of percentage of positive cells, with a threshold of 20% of positive cells [33].

This work was funded by National Science Foundation (81172532, 81470119). The authors wish to thank members of the Key Laboratory of Cancer Prevention and Therapy of Tianjin, Tianjin Medical University Cancer Institute and Hospital for providing their technical support.

This study was approved by the Tianjin Medical University Cancer Institute and Hospital, China and has been performed in accordance with the ethical standards laid down in the 1964 Helsinki declaration and its later amendments.