Gastric cancer is one of the most common malignancies worldwide. Although there has been increased knowledge of the key molecular signaling pathways involved in gastric carcinogenesis, the molecular composition of gastric cancer has not been fully understood [1, 2]. Currently, surgery is the only treatment strategy to cure relatively early-staged gastric cancer; however, for patients in an advanced stage, the overall survival is poor (approximately 10 months for those who receive conventional chemotherapy). Chemotherapy is the most common therapy for advanced gastric cancer, but its efficacy is limited. Targeted therapy is a new therapeutic approach that might improve the survival of advanced gastric cancer patients [3]. Therefore, molecular analyses have been vigorously performed for the last decades, and results suggest that alterations in the structure and function of oncogenes and tumor suppressor genes, genetic instability, as well as the acquisition of cell immortality, could be relevant in the pathogenesis of gastric cancer. Telomerase activation is believed to be a crucial event in most immortal cells and cancer cells [4]. However, its clinicopathologic significance and the mechanisms regulating telomerase activity remain to be clarified in gastric cancer.

Eukaryotic chromosomes are capped with repetitive telomere sequences that protect the chromosome ends against exonucleases and ligases, thus preventing fusion, recombination, and degradation [5]. Telomere maintenance is often accompanied by an activated telomerase to protect genetically damaged DNA from normal cell senescence; however, telomerase activation through the induction of human Telomerase Reverse Transcriptase (hTERT) is an essential step in gastric cancer [4] and other cancers [6], suggesting studying the functional maintenance of telomerase is important in tumorigenesis with senescence [5]. Cellular senescence, a state of irreversible cell cycle arrest, is a part of the aging program and it involves multiple signaling cascades [7]. In general, senescence can be divided into replicative senescence and premature senescence. Replicative senescence has been described for all metabolically active cells that undergo a spontaneous decline in growth rate. Notably, ectopic expression of hTERT can prevent it. In cancer cells, premature senescence induced by oncogenes, named oncogene-induced senescence, and plays an important role in preventing the development of cancer. This suggests that induction of cellular senescence by targeting hTERT is a potential approach for cancer therapy. Moreover, most gastric cancers show genetic instability, either microsatellite instability or chromosomal instability, which is considered an early event in gastric carcinogenesis [8]. Based on clinical pathology, up-regulated expression and activity of hTERT is a critical factor in gastric carcinogenesis, however, the regulatory mechanisms underlying hTERT expression and function in cellular senescence remains poorly understood in gastric cancer. 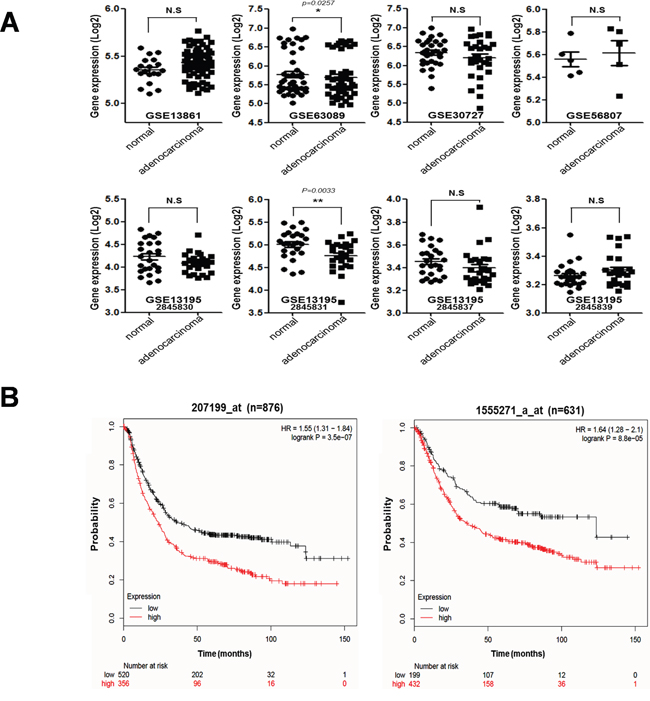 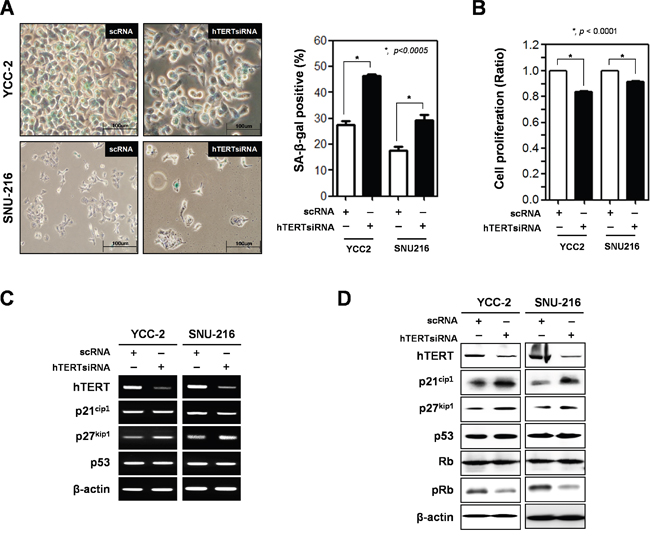 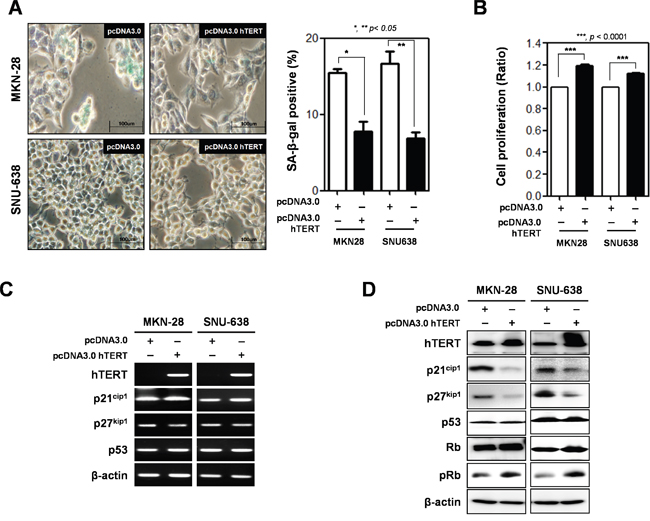 Figure 3: Overexpression of hTERT altered the cell proliferation and cellular senescence of gastric cancer cells. Both MKN-28 and SNU-638 cells were transfected with pcDNA3.0 empty vector (pcDNA3.0) and pcDNA3.0_hTERT for 48 h. A. Cellular senescence was detected by β-galactosidase activity in MKN-28 and SNU-638 gastric cancer cells after transfection with a pcDNA3.0 empty vector (pcDNA3.0) or pcDNA3.0_hTERT. The graph shows the percentage of β-galactosidase-positive cells. B. Cell proliferation was examined in MKN-28 and SNU-638 gastric cancer cell lines after transfection with pcDNA3.0 and pcDNA3.0_hTERT (P < 0.0001). C. Detection of mRNA expression levels of hTERT, p21cip1, p27kip1, and p53 were detected by RT-PCR analysis and D. protein expression levels of these were detected by western blot analysis in MKN-28 and SNU-638 cells after transfection with pcDNA3.0 and pcDNA3.0 hTERT. β-actin was used loading control.

These results suggest that expression levels of hTERT are related with induction of cellular senescence in gastric cancer cells. 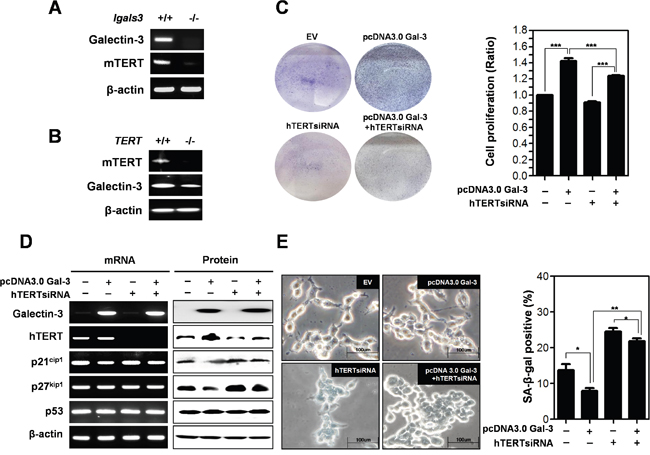 hTERT function is regulated by galectin-3 in gastric cancer cells 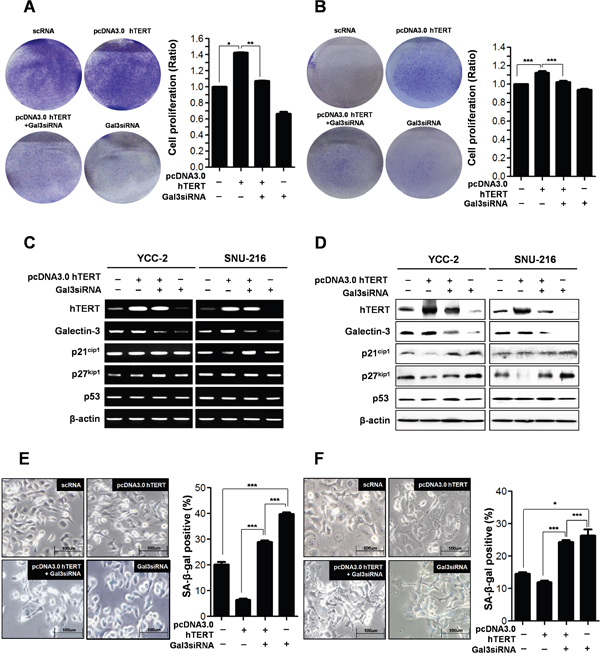 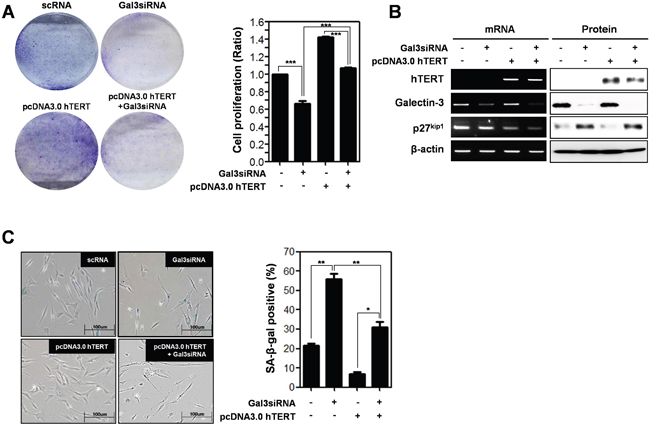 Figure 6: Depletion effect of galectin-3 on the overexpression of hTERT in both the cell proliferation and cellular senescence of human foreskin fibroblasts. A. Human Foreskin fibroblasts were transfected with scRNA alone, pcDNA3.0-hTERT alone, pcDNA3.0-hTERT and galectin-3 siRNA, and galecitn-3 siRNA alone for 48 hr. Each cell plate was stained with Crystal violet solution and showed by photographs (left panel), and cell proliferation in each cell plate was measured by WST assay and presented by quantitative graphs (right panel). B. Detection of mRNA expression levels of hTERT, galectin-3, and p27kip1 were detected by RT-PCR analysis and protein expression levels of these were detected by western blot analysis in human Foreskin fibroblasts. β-actin was used loading control. C. Cellular senescence was detected by SA-β-galactosidase activity in human Foreskin fibroblasts. The graph shows the percentage of SA-β-galactosidase-positive cells.

Galectin-3 directly interacts with hTERT to regulate its telomeric activity

To determine how galectin-3 regulates the function of hTERT, we performed an immunoprecipitation (IP) analysis to detect their interaction (Figure 7A). For this purpose, we prepared plasmids containing domains of galectin-3 (Figure 7B) and performed IP analysis (Figure 7C). Among several domains of galectin-3, overexpression of the domain of 63–250 amino acid or the 111–250 amino acid domain showed no interaction with hTERT, suggesting that the 1–63 amino acid domain could interact with hTERT. 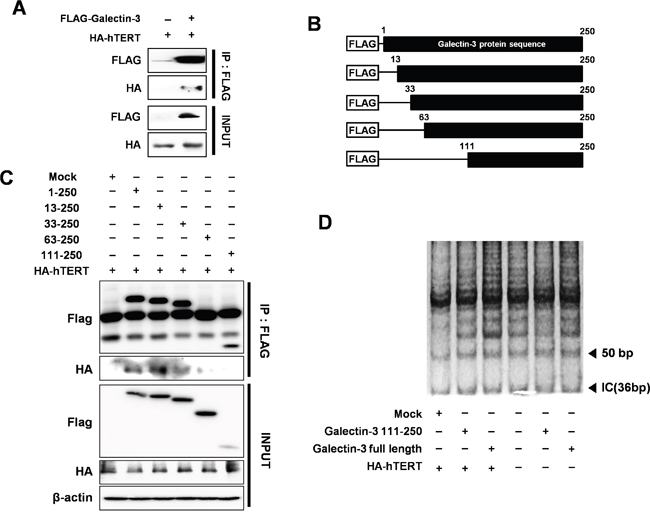 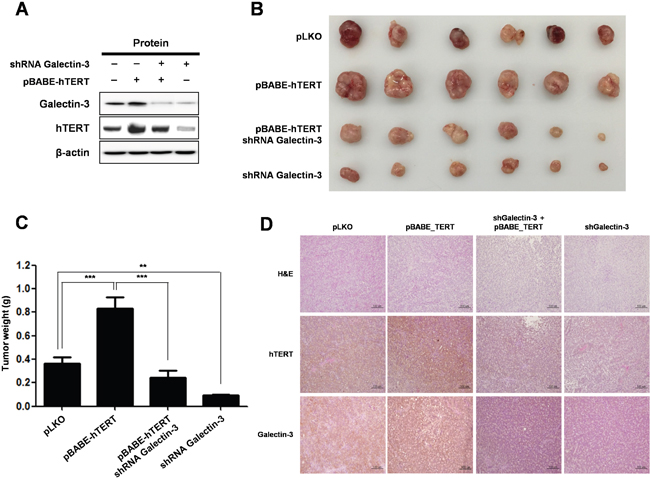 Figure 8: Knockdown of galectin-3 reduces tumor burden in gastric cancer cell xenografted mice, effect that is reversed by overexpression of hTERT. A-D. Lentivirus expressing galectin-3 specific shRNA or retrovirus overexpressing hTERT was prepared and their employed stable YCC-2 gastric cancer cells were established for in vivo study. Lentivirus expressing LacZ shRNA was used as a control and retrovirus overexpressing a vector targeting pBABE-control was used as a control. Mice (n = 5 per group) were inoculated subcutaneously into both flanks with 1 × 106 cells of each YCC-2 cells. A. hTERT overexpression and galectin-3 depletion were confirmed by RT-PCR analysis. β-actin was used loading control. B-C. Photographs B. and quantification of tumor formation C. was performed by measuring tumor size and weight 30 days after inoculation. The error bars indicate 95% confidence intervals: *, P = 0.001; **, P = 0.0015, two-sided t-test. All statistical tests were two-sided. D. Immunohistochemistry (IHC) analysis was performed to detect the expression level of galectin-3 and hTERT in tumors in in vivo mouse models. Method of IHC analysis was described in “Materials and Methods”. Scale bar presents 100 μM.

Interestingly, we detected that the expression of galectin-3 was reduced in mTERT KO MEFs. It suggested that galectin-3 and hTERT modulate each other. As evidence, we determined the direct interaction between hTERT and galectin-3. This direct interaction could regulate the functions of each other, at least on the induction of cellular senescence. It is still unknown how TERT regulates the expression level of galectin-3. However, the expression level of p21cip1 and p27kip1 and the induction of cellular senescence could be occurred through TERT regulated-galectin-3.

YCC-2, SNU-216, MKN-28, SNU-638, and human fibroblast cells were plated in 96-well culture plates (3 × 103 cells/well). After incubation for 24 h, YCC-2 and SNU-216 cells were transfected with scRNA and hTERT siRNA. MKN-28 and SNU-638 cells were transfected with an empty vector and an hTERT overexpression vector. After transfection for 48 h, the WST-1 solution (Daeil, Korea) was subsequently added to each well. After 1 h of additional incubation, the plate was shaken gently. The absorbance was measured on an ELISA reader at a test wavelength of 450 nm [28, 29].

Western blot analysis was carried out as described previously [30, 31]. Briefly, cells were lysed in RIPA buffer (Biosesang, Seoul, Korea) containing a protease inhibitor cocktail (Sigma), followed by sonication on ice. The cell lysate was centrifuged and the supernatant was collected. Then, 20 μg of protein was subjected to SDS-PAGE and transferred to PVDF transfer membranes (GE healthcare). After being blocked with 5% skim milk for 1 h, the membrane was incubated with a primary antibody dissolved in 5% BSA overnight at 4°C. After that, the membrane was incubated with a secondary antibody for 1 h, followed by detection with an ECL kit (GE healthcare) using LAS 3000. The following antibodies were used: anti-β-actin, anti-Rb, anti-pRb, anti-galectin-3, anti-p21, anti-p27, anti-p53, and anti-TERT (Santa Cruz).

Cell lysate containing 750 μg of protein was pre-cleared by incubation with 40 μL of protein-A/G linked agarose beads (Santa Cruz) for 1 h at 4°C. After the beads were spun down, the supernatant was incubated with 1 μg of a specific antibody (anti-HA or anti-FLAG, respectively) overnight at 4°C, followed by incubation with 40 μL of protein-A/G agarose beads for 1 h. Mouse IgG (Santa Cruz) was used as the negative control. After the incubation, beads were washed 3 times in RIPA buffer before being dissolved in SDS-PAGE loading buffer. Western blot analysis was performed as described above.

Galectin-3 shRNA was purchased from Sigma shRNA Bacterial Glycerol Stock. Lentivirus particles were generated using three plasmids: VSVG, RSV-REV, and PMDLg/pPRE, and were co-transfected with galectin-3 shRNA in HEK293FT cells that were transfected as described previously [32].

pBABE-neo-hTERT was obtained from Addgene [33]. Retrovirus particles were generated using two plasmids, VSVG and GAG/POL, and were co-transfected with pBABE-neo-hTERT in HEK293FT cells that were transfected as described previously.

TRAP was performed as previously described [34]. Briefly, cells were lysed with 1 X CHAPS powder (GE Healthcare, MO, USA) containing RNase inhibitor on ice for 30 min. After centrifugation at 13,000 rpm for 10 min, the protein concentration in the supernatant was determined to then incubate at 30°C for 20 min for telomere extension. The extended products were PCR amplified using TS and ACX primers for 33 cycles (denaturation at 94°C for 30 s, annealed at 59°C for 30 s and extended at 72°C for 60 s). NT and TSNT primers were added as an internal control. The PCR products were separated by 12.5% non-denaturing PAGE in 0.5 TBE. Silver staining was carried out as previously described [35]. After electrophoresis, the gels were fixed with a solution containing 0.5% acetic acid and 10% ethanol for 15 min and stained with 0.2% AgNO2 for 10 min. The stained gel was quickly washed and developed with 0.1% formaldehyde and 3% NaOH for 20 min.

All animal experiments were approved by the Institutional Review Board of Yonsei University College of Medicine and performed at specific pathogen-free facilities under conditions in accordance with the Guidelines for the Care and Use of Laboratory Animals Resources of Yonsei University College of Medicine. The preparation of xenografted mice was performed as described previously [36, 37].

Significant differences between treatment and control groups were determined using the Student’s paired t-test and ANOVA for multiple samples, if indicated. Differences were considered significant if the P value was less than 0.05. Analysis of data was performed using the Prism 5 software.

This research was supported by the National Research Foundation of Korea (NRF) grant funded by the Korea government (MSIP) (No. NRF-2014R1A2A1A11050600), the Bio & Medical Technology Development Program of the NRF funded by the Korean government, MSIP (NRF-2015M3A9B6073835, NRF-2015M3A9B6073833), the Basic Science Research Program through the National Research Foundation of Korea (NRF) funded by the Ministry of Education (NRF-2014R1A1A2055009), and the Yonsei University Yonsei- SNU Collaborative Research Fund of 2014.