Objective: To evaluate the urban-rural disparity of overweight/obesity and explore its potential trend with breast cancer among Chinese women.

Materials and Methods: A total of 1 210 762 participants were recruited from the Chinese National Breast Cancer Screening Program. Overweight and obesity were defined as body mass index (BMI) ranged 24.0–27.9 kg/m2 and BMI ≥ 28.0kg/m2, respectively.

Obesity is a known risk factor for various chronic diseases and mortality, including cancer, such as breast, colon and liver [1–3]. The Global Burden of Disease Study estimated that at least 2.1 billion adults were overweight, including 671 million people with obesity in 2013 [4]. In terms of global disability-adjusted life years (DALYs) in 2013, high body mass index (BMI) caused 4.4 million deaths and 134.0 million DALYs, and ranked as the third most important contributor to DALYs worldwide 5. Due to the increasing burden of disease caused by obesity [1–5], obesity has been defined as an independent chronic disease by the World Health Organization (WHO) [6]. As in the west, many Asian countries, for example China, are experiencing a steep rise in the prevalence of overweight/obesity and obesity associated diseases in their populations [7–10].

Before 1990s, the etiologic studies of obesity mainly focused on dietary and behavioral factors [11, 12], few of them paid attention to the socio-demographic factors. Since Sobal and his colleague first systematically reviewed the relationship between socio-demographic factors and obesity [13], this topic had quickly become a hot spot in the field of obesity research. And several studies had found an inverse relationship between obesity and lower socioeconomic status, including low education, low income, no occupation, and so on [14–16]. In addition, the relationship had shown a potential region disparity, which indicated that different risk factors may be responsible for the different prevalence of obesity for different regions. However, most studies were conducted in developed countries [17–20], few of them were conducted in developing countries [21–23].

China, as the world’s most populous country and the largest developing country, is also experiencing rapid economic, social, and cultural development, especially in urban areas. These rapid developments not only result in dramatic changes in lifestyles and dietary pattern, but also a greatly increased burden of obesity and other chronic diseases associated with these rapid changes [24, 25]. As the urban-rural disparity in socioeconomic level is enlarging, the urban-rural disparities in overweight/obesity and obesity-associated diseases are also increasing rapidly [26]. However, few studies focus on these urban-rural disparities in overweight/obesity and obesity-associated diseases, and explore the potential risk factors of these disparities, especially in the largest developing country.

Therefore, in the present study, we aim to examine the urban-rural disparity of overweight/obesity distribution and its potential trend with breast cancer among Chinese women, based on a large population-based survey of women from the Chinese National Breast Cancer Screening Program.

Table 1: Prevalence of overweight/obesity among Chinese women in urban and rural areas according to Chinese criteria and WHO criteria

aAge-standardized to the 2000 Chinese population. 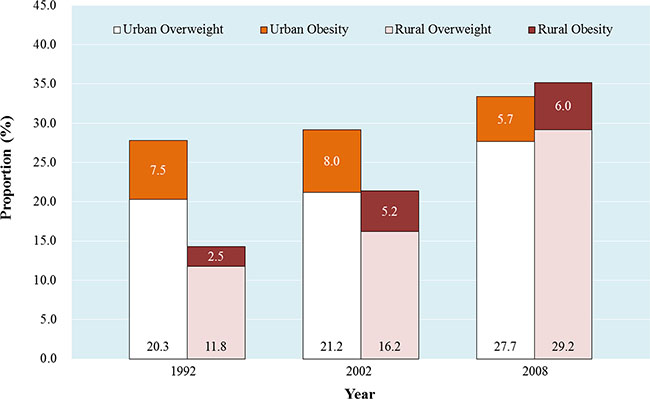 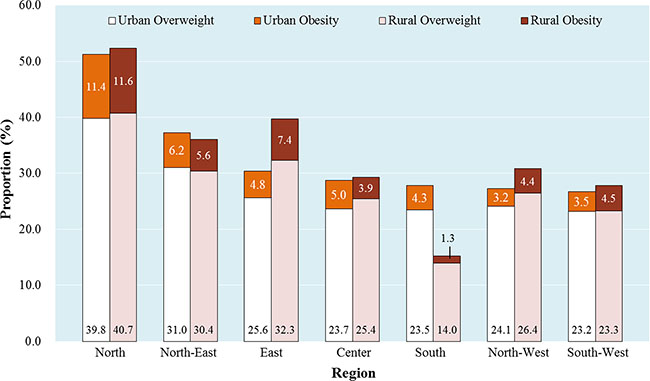 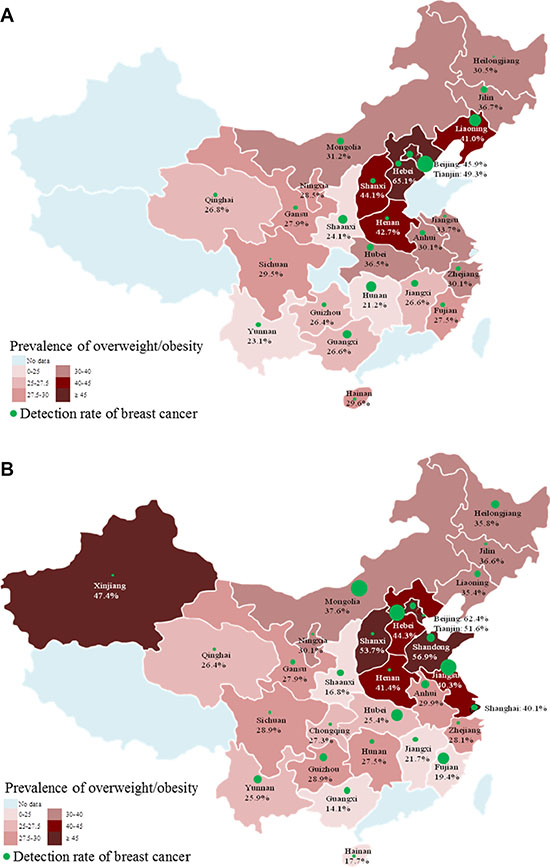 Association between overweight/obesity and demographic characteristics

Table 2: Prevalence of overweight/obesity among Chinese rural women according to different demographic characteristics

Table 3: Prevalence of overweight/obesity among Chinese urban women according to different demographic characteristics

Trend between overweight/obesity and breast cancer

Table 4: Trends between overweight/obesity and risk of breast cancer among Chinese urban and rural women

Several previous studies had also reported the disparity of overweight/obesity distribution. But most studies focused on the sex disparity or race/ethnic disparity in overweight/obesity distribution [14, 27], few studies focused on the urban-rural disparity. Several reasons could be responsible for this urban-rural disparity of overweight/obesity distribution. The most important reason could be the different social economic level between the urban areas and rural areas in China. As reported in the previous results, the urban women were more likely to have a high level of education, an occupation, high family income, few family residents and marriage at an older age when compared with rural women. These different urban-rural social economic levels could lead to different urban-rural lifestyle and dietary pattern. As pointed out in the previous studies, the dietary pattern shifted away from high-carbohydrate diets toward high-fat, high energy-density foods as income improved, particularly in the low- and middle-income group [28–30]. This phenomenon was worse in Chinese rural women. As reported from the Chinese National Nutritional Survey in 1982 and in 2002, the daily dietary fat intake increased 33g for Chinese rural women (17g for urban women) during the 20 years, and the increments of daily dietary meat and animal oil were 46 g and 0.9g (42 g and decrement of 0.2g for urban women), respectively [31]. Moreover, the available evidences also suggested that higher income indicated more chance of accessing the healthier diet [16, 32]. However, for Chinese rural population, although the increasing family income allows them to access more food, they spend more money on high-fat and high-energy foods rather than on a healthier diet [6]. That’s why there was a negative association between high family income and overweight/obesity for urban women, but a positive association for rural women. In addition, this urban-rural disparity of overweight/obesity may also be a result of differences in knowledge and lifestyles between Chinese urban and rural women. Chinese rural women were more likely to live with their descendants and spend more time on taking care of their descendants when compared with their urban counterparts. Furthermore, in Chinese culture, there is a widespread belief that obesity represents health and prosperity [8]. This belief is more popular among rural women than urban women. Therefore, rural women paid less attention to their weight gain than their urban counterparts.

This study has several strengths. Firstly, the survey was population-based and the sample size was enough, which allowed a relatively stable estimation for each analysis and stratified analysis according to different demographic variables. Secondly, various training courses and seminars were conducted to ensure standardization of data collection. However, there were also several limitations in this study. Firstly, due to lack of information in dietary habits, sedentary behavior, and physical activity for urban and rural women, we cannot further explore the association between overweight/obesity risk and this information. Secondly, as described in the section of results, due to different sampling frame between this study and previously national representative surveys, results cannot be directly compare with previously national representative data in China. However, the data across these surveys could also remind us the crude increasing trend of overweight/obesity prevalence.

The Chinese Ministry of Health launched the Chinese National Breast Cancer Screening Program (CNBCSP) which covered 29 provinces/autonomous regions/municipalities since 2008. The program recruited 397 thousand urban women aged 35–69 years and 813 thousand rural women aged 35–59 years. The target population was clustered and selected from two or four communities (one or two communities for either urban areas or rural areas) with high incidence of breast cancer in each province. The targeted communities were chosen by the provincial cancer registry according to the local cancer registry data. The study was approved by Institutional Review Board of Tianjin Medical University Cancer Institute and Hospital, and all participants provided written informed consent.

In this trial, asymptomatic women who had lived in their residential communities for ≥ 3 years. The pregnant women and lactating less than 6 months women were excluded. Moreover, women who had previously been diagnosed with breast cancer were also excluded.

During the face-to-face interview, demographic data was collected from all the participants with a structured questionnaire. The information included the participants’ age, nationality, region, education, occupation, family income, number of family residents, health insurance, marriage status, and age at marriage.

Height was measured to the nearest 0.1 cm without shoes using a portable stadiometer and weight was measured to the nearest 0.1 kg with lightweight clothing on a calibrated beam scale. BMI was calculated as weight in kilograms divided by the square of height in meters (Kg/m2). Height and weight were measured by local trained investigators. In the final analyses, subjects who had a BMI either less than 14.0 or more than 50.0 were excluded [5].

All the examination data was double-entered and checked for its consistency. Further comprehensive logic checking was conducted to remove the logic errors between variables before analysis.