Accumulated evidences demonstrated that GLB1 is involved in cell senescence and cancer development. The GLB1 rs4678680 single nucleotide polymorphism (SNP) has been identified as a hepatocellular carcinoma (HCC) susceptibility polymorphism by a genome-wide association study in Korean population previously. However, little or nothing was known about its involvement and functional significance in hepatitis B viruses (HBV)-related HCC in Chinese. Therefore, we investigated the association between the GLB1 rs4678680 SNP and HBV-related HCC risk as well as its biological function in vivo. Genotypes were determined in two independent case-control sets from two medical centers of China. Odds ratios (ORs) and 95% confidence intervals (CIs) were estimated by logistic regression. The potential regulation role the rs4678680 genetic variant on GLB1 expression was examined with HCC and normal liver tissues. We found that The rs4678680 G allele was showed to be risk allele; individuals with the TG genotype had an OR of 1.51 (95% CI = 1.10–2.07, P = 0.010, Shandong set) or 1.49 (95% CI = 1.11–1.99, P = 0.008, Jiangsu set) for developing HBV-related HCC, respectively, compared with individuals with the TT genotype. This association was more pronounced in males, individuals aged older than 57 years and drinkers (all P < 0.05). In the genotype-phenotype correlation analyses of fifty-six human liver tissue samples, rs4678680 TG or GG was associated with a statistically significant increase of GLB1 mRNA expression (P < 0.05). Our data indicated that the GLB1 rs4678680 SNP contributes to susceptibility to develop HBV-related HCC, highlighting the involvement of GLB1 and cell senescence in etiology of HCC.

Although ranking the fifth most common cancer, hepatocellular carcinoma (HCC) is the third leading cause of cancer-related mortality worldwide [1]. There is a high incidence of HCC in China and other Asia-Pacific region [1]. Notably, China alone accounts for about 50% of all HCC cases in the world [1, 2]. There were several epidemiological features, such as marked variations between geographical regions, racial and ethnic groups, and sex. It has been revealed that men have a higher prevalence of HCC than women, i.e. the male:female ratio of HCC patients is ~2.65:1 in high-risk Chinese populations [2, 3]. Chronic infections with the hepatitis B or C viruses (HBV or HCV), exposure to dietary aflatoxin B as well as excessive alcohol drinking have been identified as major environmental risk factors of HCC [2, 3]. Since about 75% cases of HCC are associated with HBV infection in China [4], HBV infection is considered as one major risk factor for HCC. However, only 15% chronic HBV carriers suffer from HCC in their lifetime [2, 3], indicating that host genetic factors may also be involved in development of HBV-related HCC. This notion has been proved by several candidate gene and genome-wide association study (GWAS) on HBV-related HCC in eastern Asians [5–10].

To identify genetic factors associated with HCC, Clifford et al. conducted a comprehensive, genome-wide variation analysis (both genetic polymorphisms and copy number variations) in a population of unrelated Asian individuals [11]. After genotyping 386 Korean HCC cases and 587 Korean controls with the Affymetrix SNP6.0 assay, they found that the 3p21.33 GLB1 rs4678680 G > T polymorphism is most significantly associated with HCC risk (odds ratio [OR] = 2.27, 95% confidence intervals [CI] = 1.68–3.08, P = 6 × 10–7). GLB1 encodes a member of the glycosyl hydrolase 35 family of proteins, which catalyzes the hydrolysis of a terminal betalinked galactose residue from ganglioside substrates and other glycoconjugates. Accumulated evidences demonstrated that GLB1 is involved in cell senescence [12, 13] and cancer development [13–16]. Senescence phenotype could be induced by increased SA-b-galactosidase staining and elevated GLB1 mRNA expression, indicating the important role of GLB1 in cell senescence. During the long latency of tumor development, oncogene-induced senescence has emerged as a barrier to tumorigenesis including HCC. Chen et al. conducted a replication case-control study on the association of 1p36.22, 2q32.2–q32.3, 3p21.33, 8p12, 14q32.11 and 21q21.3 with HCC among 507 Chinese HCC patients and 3014 Chinese controls. However, they did not included GLB1 rs4678680 G > T single nucleotide polymorphism (SNP) in the study. As a result, it is still largely unclear if GLB1 rs4678680 polymorphism plays a part in etiology of HCC in Chinese. Also, little or nothing has been known about functional significance of the GLB1 rs4678680 SNP in HBV-related HCC. Therefore, we conducted two large independent case-control studies to investigate the association between the GLB1 rs4678680 genetic polymorphism and risk for developing HBV-related HCC. To validate the biological function of the rs4678680 SNP in vivo, we examined the association between GLB1 rs4678680 genotypes and its mRNA expression levels in normal liver tissues.

aHCC case vs. chronic HBV carriers, data were calculated by logistic regression with adjustment for age, sex, smoking and drinking.

aHCC case vs. chronic HBV carriers, data were calculated by logistic regression with adjustment for age, smoking and drinking.

aHCC case vs. chronic HBV carriers, data were calculated by logistic regression with adjustment for sex, smoking and drinking.

aHCC case vs. chronic HBV carriers, data were calculated by logistic regression with adjustment for age, sex and smoking. 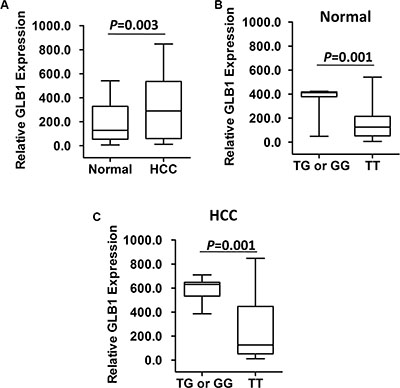 In the current study, we examined the association between the GLB1 rs4678680 SNP and risk of developing HBV-related HCC in a case-control design. Although the genetic predisposition to HCC of the GLB1 rs4678680 polymorphism was firstly identified in Korean populations via GWAS, this is still the first validation study with relative large sample size in different ethnic populations. We found significantly increased HCC risk among individuals with the GLB1 rs4678680 TG or GG genotype compared with those with TT genotype in Chinese. In the genotype-phenotype correlation analyses of fifty-six human liver tissue samples, rs4678680 TG or GG was associated with a statistically significant increase of GLB1 mRNA expression.

The GLB1 gene provides instructions for producing an enzyme called β-galactosidase. This enzyme is located in lysosomes, which are compartments within cells that break down and recycle different types of molecules. Within lysosomes, GLB1 helps break down certain molecules, including substances called GM1 ganglioside and keratan sulfate. Caldwell et al. found that GLB1 activity is the only biomarker that accurately identifies a small and heterogeneous population of non-proliferating premalignant cells in the pancreas, indicating the utility of GLB1 to predict the senescent state in pancreatic preneoplasia [13]. Additionally, increased GLB1 is a valuable marker in formalin-fixed paraffin-embedded tissues for the senescence-like phenotype and associates with improved prostate cancer outcomes [16]. All these evidences support the involvement of GLB1 in carcinogenesis, possibly through regulating cell senescence.

Several limitations may exist in this case-control study. First, because it was a hospital-based study and the cases were from hospitals, there might be inherent selection bias. As a result, it is crucial to confirm these observations in a population-based prospective study. Second, the statistical power for gene-covariate interaction analyses may be limited. Third, since the P value for association between the GLB1 rs4678680 SNP and HCC risk in the current study are not less that 10–7, it is possible that these polymorphisms may not be identified by the aforementioned four large scale HCC GWAS in Chinese [7–10].

In summary, our study elucidated that the GLB1 rs4678680 polymorphism was associated with risk of HBV-related HCC in Chinese populations, highlighting the involvement of GLB1 and cell senescence in etiology of HCC.

SYBR-Green real-time quantity PCR method was used to examine GLB1 mRNA levels in normal liver tissues as described previously [18–20]. Total cellular RNA was isolated and converted to cDNA using the ReverTra Ace qPCR RT Kit (TOYOBO). Relative gene expression quantitation for GLB1 and β-actin as an internal reference gene was carried out using the ABI 7500 real-time PCR system in triplicates. The primers used for GLB1 were 5′- GTCTATTCTTCTCCGCTCCT -3′ and 5′- TGTGCTCCATCAGTGGTAA -3′; and for β-actin were 5′-GGCGGCACCACCATGTACCCT-3′ and 5′-AGGGGCCGGACTCGTCATACT-3′. The expression of individual GLB1 mRNA measurements was measured relative to expression of β-actin mRNA using the method as described previously [21].

The differences in demographic variables and genotype distributions of the GLB1 rs4678680 SNP between cases and controls were examined via Pearson’s χ2 test. The associations between genotypes of GLB1 rs4678680 and HBV-related HCC risk were estimated by ORs and their 95% CIs computed by logistic regression models. All ORs were adjusted for age, sex, smoking or drinking status, where it was appropriate. Kruskal-Wallis one-way analysis of variance tests were performed to calculate GLB1 mRNA expression differences between different rs4678680 genotype carriers. A P value of less than 0.05 was used as the criterion of statistical significance, and all statistical tests were two-sided. All analyses were performed using SPSS 16.0 (SPSS Inc.).