The lncRNA MALAT1 is a novel biomarker for gastric cancer metastasis

Gastric cancer (GC) is the fourth common cancer and the second leading cancer-related cause of death worldwide [1, 2]. Although the early detection rate of GC have increased, there are still many patients suffering from distant metastasis, with a median survival of only 3-5 months [1-4]. Thus, it is important to identify oncogenes that promote gastric cancer metastasis. These oncogenes may serve as not only biomarkers for gastric cancer progression, but also molecular targets for gastric cancer therapy.

The long non-coding RNAs (lncRNAs) are generally deﬁned as transcripts composed of more than 200 nucleotides in length, and associated with many important cellular processes and pathogenesis. It has been reported that lncRNAs are differentially expressed in many types of tumors [5, 6]. Several studies demonstrated that lncRNAs were remarkably stable in blood samples, thus, making the quantitative detection of lncRNAs in blood feasible [7, 8]. The circulating lncRNAs have been extensively studied as biomarkers for the diagnosis and prognosis of many cancer types, including lung cancer, liver cancer, renal cell carcinoma, breast cancer, cervical cancer, uterine endometrial, stromal sarcoma and colorectal carcinoma [9-19]. However, the specific lncRNAs that are associated with GC remain poorly understood [9, 20, 21].

Metastasis-associated lung adenocarcinoma transcript 1 (MALAT1), also known as nuclear-enriched abundant transcript2 (NEAT2), is one of the ﬁrst cancer-associated lncRNAs. MALAT1 is highly conserved across species and is widely expressed in human tissues [22]. Since it was discovered nearly a decade ago, an accumulated large amount of data have linked MALAT1 to many cancer types [10, 12-16, 19, 23]. Much evidence, including our previous work, have indicated that circulating microRNAs were promising biomarkers for the diagnosis and prognosis of gastric cancer and other diseases [24]. However, MALAT1 has been poorly studied for this purpose [9, 20, 21, 25]. Here, we showed that tissue and plasma MALAT1 levels were dramatically higher in GC patients with distant metastasis than patients without metastasis. Knockdown MALAT1 significantly inhibited the malignant behaviors of gastric cancer cells. The miR-122-IGF-1R signaling correlated with the deregulated MALAT1 expression in gastric cancer cells.

MALAT1 levels are up-regulated in GC/DM plasma and tissues

Here, we firstly collected 39 pairs of gastric cancer tissues and adjacent normal tissues, including 14 pairs gastric cancer patients without distant metastasis(GC/NDM) and 25 pairs gastric cancer patients with distant metastasis(GC/DM), and extracted the RNAs from these tissues. Q-PCR was performed to detect the levels of MALAT1 in the tissues, and the results indicated that the MALAT1 levels was significantly higher in GC/DM cancer tissues (C-DM) than that of the adjacent normal tissues (N-DM) (P< 0.0001) and the GC/NDM cancer tissues (C-NDM) (P=0.0134), while there is nearly no difference between the GC/NDM tissues and the adjacent normal tissues (Figure 1A, 1B, Supplementary Figure S1). Next, we systematically examined the MALAT1 levels in the plasma of 36 healthy controls (HC) and 72 gastric cancer patients, including 36 GC/NDM and 36 GC/DM. Interestingly, the result is consistent with the data in tissues. The levels of plasma MALAT1 was significantly higher (P<0.01) in the GC/DM when compared with that of the GC/NDM and HC groups, and there was nearly no difference in the levels of plasma MALAT1 between the GC/NDM and HC groups (P>0.05) (Figure 1C and 1D, Supplementary Figure S2). Using the AUC of the ROC curve to estimate the diagnostic value of plasma MALAT1 in discerning distant metastasis in GCs, we found that the plasma levels of MALAT1 could effectively distinguish patients with GC/DM from patients with GC/NDM and the HCs (Figure 1C and 1D). Univariate Cox analysis revealed that TNM stage (IV) and differentiation (poor) were significantly associated with reduced patient survival, while high levels of plasma MALAT1 correlated to poor prognosis of patients with GC. Multivariate Cox analysis indicated that high plasma MALAT1 independently correlated to a poor prognosis of patients with GC (hazard ratio, 2.169; 95% CI, 0.265 to 4.324; P=0.031) (Table1). 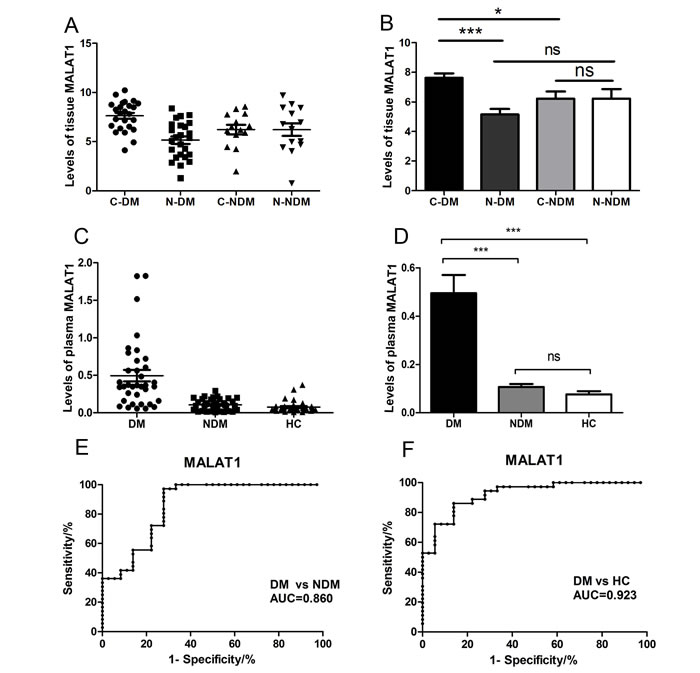 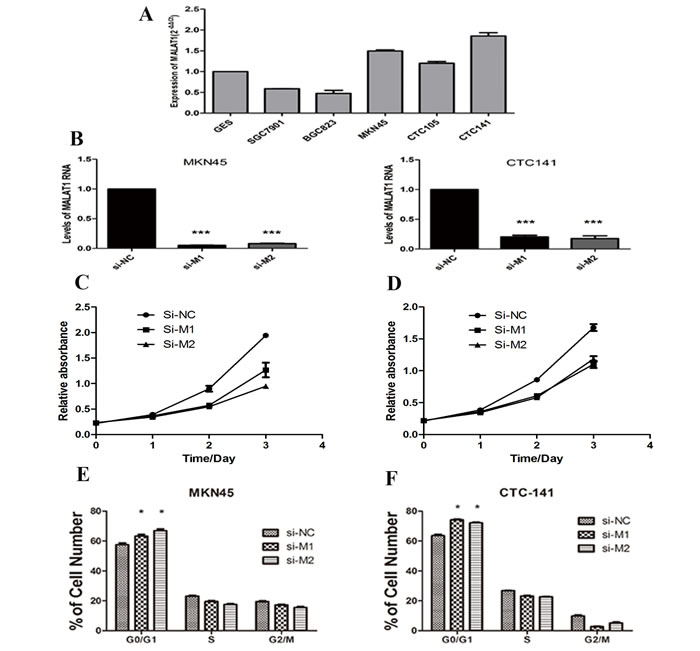 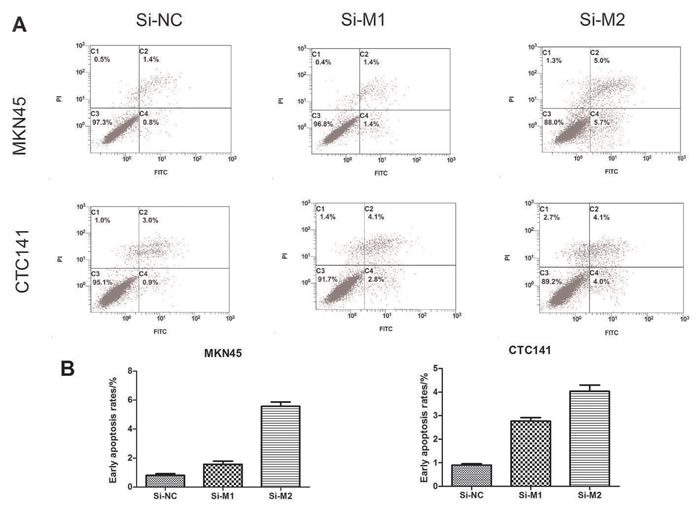 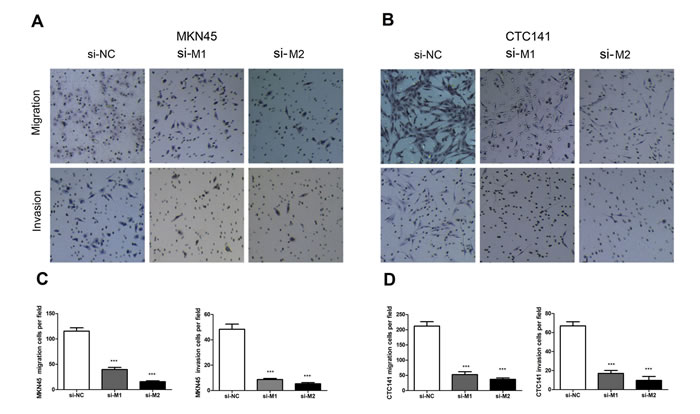 The miR-122-IGF-1R signaling correlated with the dysregulation of MALAT1 in gastric cancer cell. 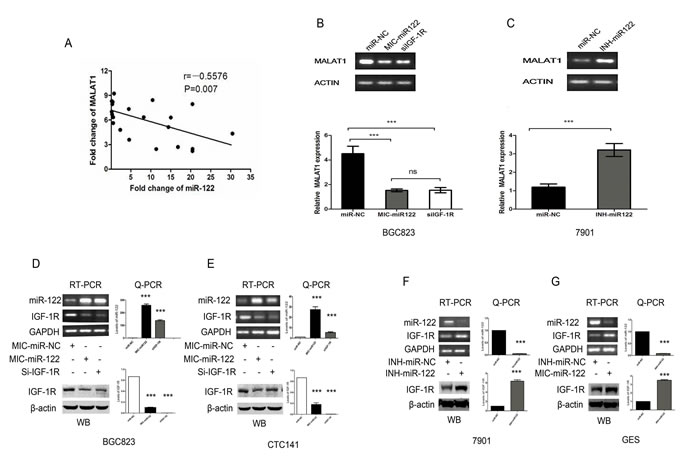 Recent studies have demonstrated that lncRNAs were involved in oncogenesis [5, 6]. The lncRNA MALAT1 is over-expressed in a variety of human tumors. Over-expression of MALAT1 promotes tumor progression [10-17]. In the current study, we demonstrate that circulating lncRNA MALAT1 could be detectable in plasma, and the circulating MALAT1 level was dramatically up-regulated in patients with GC/DM than that of GC/NDM and the healthy controls. Specially, MALAT1 expression was found to be significantly higher at later stages of tumor development and in tumors that had undergone extensive metastasis. There is no difference between the GC/NDM and the healthy controls. Notably, it has been reported that there is no difference in the levels of plasma MALAT1 between gastric cancer patients and healthy controls, and it is unclear whether there is any difference in plasma MALAT1 levels between healthy controls and patients with late-stage gastric cancer in this study [9]. The reason behind may be that the component of the patients were so different in the two studies, and they didn’t take the metastasis state into consideration.

In all, the current study indicated that MALAT1 up-regulation might be a valuable biomarker for the distant metastasis in gastric cancer patients, and miR-122-IGF-1R signaling might be involved in the MALAT1 dysregulation in gastric cancer. These findings provided further insight in the gastric tumorigenesis.

The human gastric mucosal cell line GES-1, and the human GC cell lines SGC7901, MKN45 and BGC823 were maintained in our laboratory. The circulating tumor cell lines CTC141 and CTC105 were a kind gift from the Laboratory of Stem Cell Biology of Sichuan University [24]. These two cell lines are CD44-positive cells with great potential for tumor metastasis, and were derived from blood samples of two patients with gastric adenocarcinoma by magnetic isolation, purification and stable passaging. All six cell lines were maintained in RPMI-1640 medium supplemented with 10% fetal bovine serum (HyClone, USA) in 5% CO2 at 37oC.

Gastric cancer cells were seeded in 96-well plates and after 24 hours cells were transfected with two kinds of siRNA or negative control respectively. Relative cell growth was measured by Cell Counting Kit-8 (Dojingdo, Kumamoto, Japan). Cells were transfected with siRNA against MALAT1 for 48 hours. The cells were then digested by trypsin, collected by centrifugation, washed by PBS and fixed overnight at 4oC by 70% ethanol. Then, the cells were washed with PBS and stained by PI at 4oC for 30min according to Cell Cycle Detection Kit (KeyGEN, Nanjin, China). At last, the cells were analyzed with a flow cytometer (BD FACS Calibur, USA)

Twenty-four hours after transfection, cells were collected and suspended in serum-free medium. 4×104 cells in 0.2 ml serum-free medium were plated in the top chamber with matrigel-coated membrane (24-well insert; pore size: 8mm) (BD, USA), with 10% FBS as a attractant. The cells were incubated for 48 h and the filter was stained with hematoxylin and eosine (HE staining) for visualization, and counted.

The signiﬁcance of cell and plasma lncRNA levels was determined by the Mann–Whitney, Wilcoxon, and Kruskal–Wallis tests as appropriate. Plasma MALAT1 receiver operating characteristic (ROC) curves were constructed to discriminate among different groups of patients. The area under the ROC curve(AUC) was used to assess the predictive power. The sensitivity and speciﬁcity were calculated according to the standard formulas. All of the p-values were two-sided and p<0.05 was considered to be statistically signiﬁcant. All of the statistical calculations were performed using the GraphPad Prism 5.

We would thank all of the participants for agreeing to participate in this research.

This work was supported by the Program for Changjiang Scholars and Innovative Research Team in University (PCSIRT, Grant No. IRT1272) of China, grants from the National Basic Research Program of China (No. 2011CB935800), the National Natural Science Foundation of China (No. 81572731, 81071640, ). We also thank prof. Jang Yangfu for the language revision.