Purpose: Advanced Ewing sarcomas have poor prognosis. They are defined by early relapse (<24 months after diagnosis) and/or by metastasis to multiple bones or bone marrow (BM). We analyzed risk factors, toxicity and survival in advanced Ewing sarcoma patients treated with the MetaEICESS vs. EICESS92 protocols.

Ewing sarcomas are defined by t(11;22)(q24;q12) derived EWS/ETS fusion oncogenes [1]. They occur in both bone and soft tissue [2]. Advanced Ewing sarcoma comprises early relapse or metastatic to multiple bones (i.e. more than one) or bone marrow (BM) [3, 4]. Overall survival of advanced Ewing sarcoma after ten years is ≤10% [4–6], warranting the study of intensified treatment modalities [6–19]. Moreover, the distinct contribution of BM involvement vs. multiple bone metastases to the dismal prognosis is not defined.

In the MetaEICESS 1992 protocol we used induction chemotherapy, whole-body MRI (whole-body MRI) and PET based primary and metastatic tumor irradiation combined with autologous stem cell rescue, followed by tandem high-dose chemotherapy with additional autoologous rescue as consolidation [4]. In the prospective MetaEICESS 2007 study, this sequence was complemented by reduced intensity conditioning and allogeneic stem cell transplantation. Results of disease-free survival of both MetaEICESS protocols were compared with advanced Ewing sarcoma patients who received the EICESS 1992 regimen with induction and consolidation chemotherapy and primary tumor radiation only. Furthermore, results of the MetaEICESS 1992 [4] and the EICESS 1992 groups [22] previously published are updated here.

Advanced Ewing sarcoma was defined by early relapse (<24 months after diagnosis) and/or by metastatic disease to multiple bones or BM. BM involvement was defined as cytological detection of tumor cells in the BM aspirate. Death of disease comprised any death directly related to disease progression or relapse. Complete remission was defined as lack of tumor evidence. Death of complication was any death attributable to therapy. In this report, disease-free survival was defined as the interval between the date of diagnosis that prompted respective protocol admission until the occurrence of any local or metastatic tumor evidence (or death of complications when indicated). In MetaEICESS 2007 patients we determined a second disease-free interval as well as overall survival which was was defined as the time period from the last allogeneic stem cell transplantation until first relapse, death or last follow-up (compare Supplementary Figure S1).

44 patients were assessed in this study: 18 patients enrolled in the two subsequent single-center MetaEICESS 1992 (registered from 1995 to 2000) and 2007 protocols (registered from 2007 to 2014) were compared to 26 controls (EICESS 1992; registered from 1992 to 1996). Eligibility criterion was diagnosis of advanced Ewing sarcoma. The cut off of ≥ 2 bone metastases and/or early relapse (relapse<24 months after diagnosis) was identical to previous studies [4, 23]. Patients were only treated with the according protocol, respectively, and did not switch groups during treatment course. All patients and their legal guardians signed informed consent prior to therapy. Protocol treatment was applied after approval by the institutional review boards according to the precepts established by the Helsinki Conference Declaration.

In the EICESS group 26 patients with multiple bone metastases at diagnosis (aged 6–37 years; median: 17 years) were registered from 1992 to 1996 and treated according to the EICESS 92 protocol for advanced Ewing sarcoma, as previously described. In order to prevent a selection bias in favor of MetaEICESS and to warrant comparability to patients treated with the MetaEICESS protocols, only data of EICESS 1992 patients who were alive at a median time of 7.5 months after diagnosis, which equals the median time from diagnosis to first high-dose chemotherapy treatment of MetaEICESS 2007 and 1992 groups, were included.

11 patients were diagnosed with advanced Ewing sarcoma between 1992 and 2000. Diagnoses based upon histopathology. Median age at diagnosis that prompted MetaEICESS admission was 16 years (range 6–32 years). These patients were previously described [4]. Median time from diagnosis to first high-dose chemotherapy treatment was 8 months. 3 out of 11 had BM involvement at initial diagnosis (Supplementary Tables S1 and S2). Patients also received high-dose chemotherapy etc. irrespective of remission.

Diagnoses were made between 2007 and 2013 based upon histopathology and detection of translocations. Median age at diagnosis that prompted MetaEICESS admission was 15 years (range 8-17 years). Median time from diagnosis to first high-dose chemotherapy treatment was 5 months. 3 out of 7 patients had BM involvement at initial diagnosis (Supplementary Tables S1 and S2). Patients received high-dose chemotherapy and ensuing treatments irrespective of remission status. 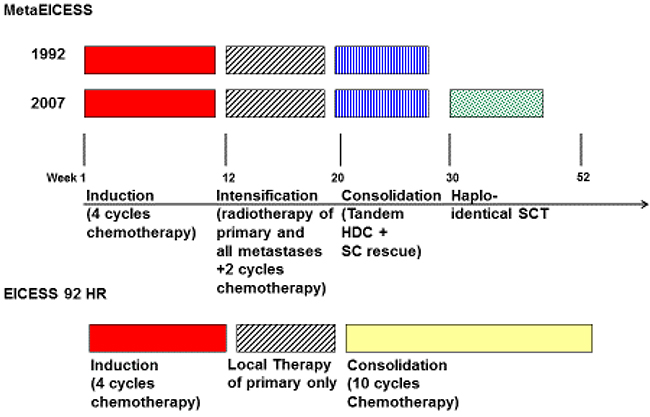 Statistical differences in were determined using the Graphpad Prism software, version 5.0 as well as R 2.11.0 (The R Foundation for Statistical Computing, Vienna Austria). In univariate analyses, statistical differences in disease-free survival were determined with the Kaplan–Meier method using the log rank (Mantel-Cox) test and the Breslow-Wilcoxon test. In the multivariate analysis, considered independent variables were patient age at diagnosis, gender, protocol (EICESS92 vs MetaEICESS) and BM involvement at diagnosis. Statistical differences were determined using the Wald test. Hazard ratios (HR), standard errors and confidence intervals (CI) are given when appropriate. In order to determine a correlation between BM involvement with the number of bone metastases at diagnosis the two-tailed t-test was used. In all tests p<0.05 was considered statistically significant. Final data base update was conducted on March 1st 2015.

In the MetaEICESS 1992 group, 3/11 (0.28) patients were alive at the end of the follow-up period, while 8/11 had died; 3/11 succumbed to treatment related complications and 5/11 to the underlying disease. Of those patients who had succumbed to complications, patient #10 died of treatment-related bacterial sepsis whereas patients #15 and #16 died of treatment-related secondary malignancies (liposarcoma and myelodysplastic syndrome) (Supplementary Table S2). Both latter patients were treated with allogeneic stem cell transplantation as rescue therapy after diagnosis of treatment related secondary malignancies. Median disease-free survival was 40 months (range: 6 months–20 years). 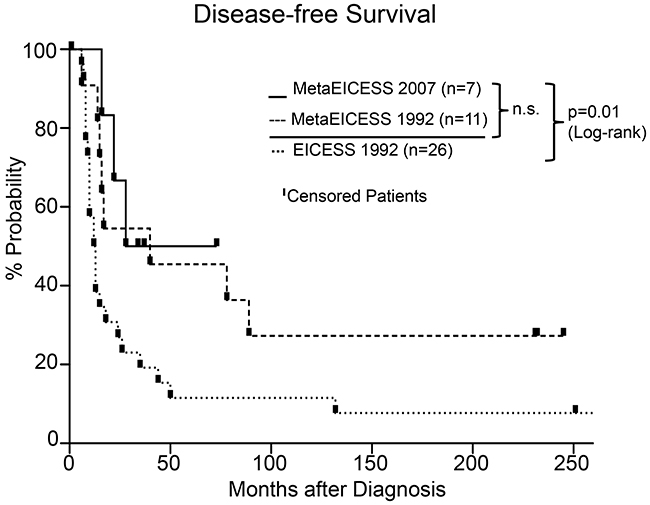 In the EICESS 1992 group 2/26 patients, 0.08 remained alive in complete remission at the end of the follow-up period. 24 patients had died, 22/24 of disease, 2/24 of complications. One of the latter two patients with treatment related complications died of secondary malignancy. 6/26 patients had BM involvement at diagnosis, all of whom died of disease. Median disease-free survival was 12.5 months (range 6 months–20 years). 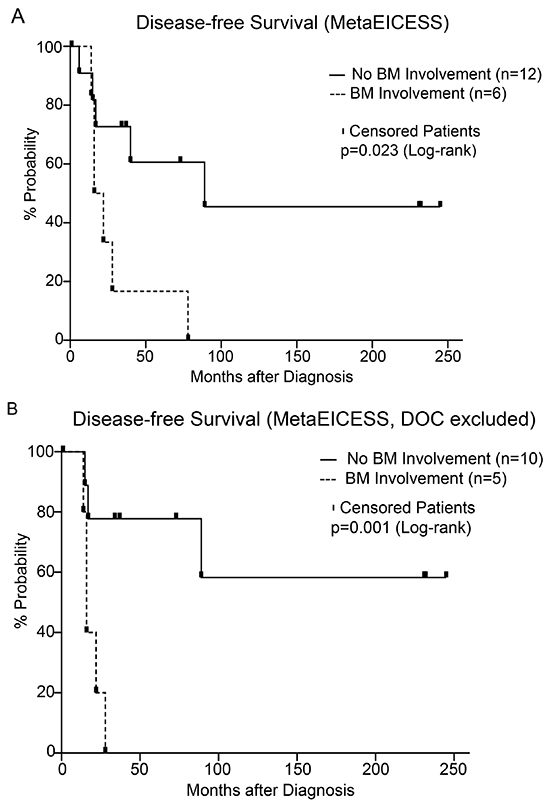 Upon multivariate analysis, neither age at diagnosis nor gender had an influence on disease-free survival. EICESS 1992 treatment as well as BM involvement at diagnosis was confirmed as risk factors for poor outcome (both p<0.01; Table 1). When MetaEICESS patients were excluded, multivariate analysis within the EICESS 1992 group confirmed BM involvement as a risk factor for poor outcome (Wald test p=0.03, Supplementary Table S3).

Our report deals with a new treatment protocol designed for a subgroup of patients with a rare disease with a hitherto dismal prognosis. Herein, we report on the results of our prospective single-center MetaEICESS 1992 and 2007 approaches in comparison to EICESS 1992. Primary and secondary endpoints were disease-free survival and toxicity. Even for the small numbers accumulated in this report (n=44), we had to compare patients treated within a time period of 22 years. This long period may compromise death of complications comparability between groups, e.g. due to improvement in supportive therapy or staging drift e.g. by introduction of PET-CT or possibly the extent of BM sampling. However, our studies continuously employed ≥ 2 metastatic bones as assessed by technetium scintigraphy as the entry criterion to the study and further evaluation by whole-body MRI. To the best of our knowledge, there is no published evidence that PET-CT is more sensitive than the combination of whole-body MRI, PET and BM aspirate in detecting additional bone metastases or BM involvement. Moreover, PET-CT did not affect the entry to our protocol. Our studies provide a unique long term evaluation of a very rare entity whose prognosis remained unchanged in most studies with reliable and sensitive diagnostic criteria conserved over this long term period: whole-body MRI and BM cytology.

In landmark as well as in recent studies, improvement of local therapy has proven crucial in the treatment of advanced Ewing sarcoma patients [11, 20, 24], whereas the role of high-dose chemotherapy regimen with autologous stem cell transplantation in the treatment of advanced Ewing sarcoma patients remains subject to an ongoing discussion [4, 7, 10, 15–17, 25–35]. The conflicting results of various studies including our previous analyses [6, 20] in contrast to the results of Meyers et al. [21] may be due to variation in intensity of local therapy. We cannot rule out that better results in MetaEICESS vs. EICESS are impacted by variation in induction chemotherapy. However this possibility does not compromise our conclusions that the MetaEICESS regimes in total yield a superior result as compared to EICESS.

Assessing the role of allogeneic stem cell transplantation it turned out that despite better toxicity control in MetaEICESS 2007 compared to MetaEICESS 1992, disease-free survival did not differ. This may be due to the higher incidence of BM involvement as a confounding variable in MetaEICESS 2007 3/7 (0.43) vs. 3/11 (0.27) conferring poor prognosis. Thus, MetaEICESS protocols yield long-term survival in advanced Ewing sarcoma patients but do not eliminate the negative impact on disease-free survival of BM involvement. In a recent study, 87 out of 507 (0.17) ES patients with disseminated disease showed BM involvement [30]. While our previous observation that the presence of multiple bone or BM metastases is associated with poor prognosis in ES has been confirmed in this study, the single contribution of multiple bone metastases vs. BM involvement has not been assessed so far. In our study population of 44 patients there was no significant correlation between BM involvement and the number of bone metastases at diagnosis. Of note, Kopp et al. reported recently that BM involvement correlates with the number of bone metastases [3].

So far, BM involvement has not been published as a distinct risk factor beyond multiple bone metastases in advanced Ewing sarcoma. In addition to variation in local therapy, the unknown distribution of the risk factor BM involvement may explain, at least in part, the afore mentioned conflicting results of previous studies e.g. Meyers et al. [21] vs. Burdach et al. [6, 20], Barker et al. [36] and Rasper et al. [7].

Taken together, BM involvement identifies a subgroup of advanced Ewing sarcoma patients with fatal outcome irrespective of therapy whereas advanced Ewing sarcoma patients with multiple bone metastases but without BM involvement may be cured with the MetaEICESS protocols. Allogeneic stem cell transplantation yielded no deaths of complications in this setting and quality of life was good in all survivors in comparison to former analyses [14, 37]. Despite the fact that eligibility criteria were identical, treatment groups were not randomized and not treated contemporaneously. Thus, there may be potential bias in eligibility that may impact the observation that MetaEICESS may be associated with improved outcome. Nevertheless, allogeneic stem cell transplantation warrants future evaluation to improve prognosis in particular of advanced Ewing sarcoma patients without BM involvement, whereas patients with BM involvement require additional novel approaches.

We wish to thank all patients and their families and all treating physicians and nurses for their contribution to this study. We would also like to thank Sarah Petzold for documentation.

SB has an ownership interest in PDL BioPharma, and holds US and EU intellectual properties in gene expression analysis. None of the other authors has any conflict of interest associated with this study.

The study was supported by grants to SB from the Wilhelm Sander-Stiftung (2006.109.1), Else Kröner–Fresenius–Stiftung (P31/08//A123/07) and the Deutsche Kinderkrebsstiftung (DKS 2010.07); SB and UT received a grant from the Federal Ministry of Education and Research Germany (TranSarNet 01GM1104B). T.G.P.G. is supported by a grant from the Deutsche Krebshilfe, the Daimler and Benz Foundation in cooperation with the Reinhard Frank Foundation, by LMU Munich’s Institutional Strategy LMUexcellent within the framework of the German Excellence Initiative, and by the ‘Mehr LEBEN für krebskranke Kinder – Bettina-Bräu-Stiftung’. HJ and UD were supported by the Deutsche Krebshilfe (DKH-108128), the Federal Ministry of Education and Research Germany, and HJ, SB, UD, UT by BMBF (TranSaRNet 01GM0869) UD by PROVABES ERA-Net-TRANSCAN (01KT1310) and EEC (602856-2, EU FP7), PanCareLife (602030-2 EU-FP7). EK was supported by Deutsche Krebshilfe (DKS 50-2635) and ITvL by Cura Placida Children’s Cancer Research Foundation.