The associations between MDM4 gene polymorphisms and cancer risk

Cancer is a worldwide health problem and the second leading cause of morbidity and mortality in human diseases [1]. Cancer metastasis to other parts of the body is the major cause of death [2]. Chen et al. reported that approximately 4,292,000 new cancer cases and 2,814,000 cancer deaths would occur in China in 2015 [3]. It is obvious that cancer is a major threat to human health. However, the exact mechanism of carcinogenesis is still poorly understood. An increasing number of studies have reported that cancer is a complex disease, resulting from environmental and genetic factors and their interactions [4, 5]. In addition, genetic factors play important roles in the pathogenesis of cancer, and many genes have been identified as cancer-susceptible genes [6].

The tumor suppressor p53 plays an important role in many physiological processes, such as maintenance of genomic stability and control of cell growth and apoptosis [7, 8]. Inactivation of the p53 tumor suppressor is critical for tumorigenesis. The activity of p53 is strictly regulated, predominantly by MDM2 and its homolog MDM4 [9]. MDM4 shares an N-terminal p53-binding domain with MDM2 and can inhibit p53 activity during various malignancies [10–12]. Overexpressed MDM4 in human tumors may contribute to reduced p53 activity and tumorigenesis [13]. Many studies [14, 15] have demonstrated that mouse embryos lacking MDM4 die during embryogenesis. Migliorini et al. found MDM4 regulates p53-induced growth arrest and neuronal cell death during early embryonic mouse development [14]. Furthermore, transgenic mice overexpressing MDM4 showed spontaneous carcinogenesis and accelerated tumorigenesis [16]. Additionally, MDM4 is reported to be highly expressed in a significant percentage of human cancers, including 65% of retinoblastomas, 80% of adult pre-B lymphoblastic leukemia, 39% of head and neck squamous carcinomas, 19% of colon cancers, 19% of breast cancers, and 18% of lung cancers [17–20]. All above studies indicated that MDM4 gene may be significantly associated with cancer susceptibility.

Recently, many studies [13, 21–30] have described the associations between MDM4 gene polymorphisms and risks of various cancers, including colon cancer, lung cancer, breast cancer, gastric cancer, squamous cell carcinoma of the head and neck, non-Hodgkin lymphoma (NHL), and esophageal squamous cell carcinoma (ESCC). However, the results of these studies were conflicting and inconclusive. The clinical heterogeneity, different ethnic populations, and small sample sizes of previous studies may have contributed to these disparities. To overcome these limitations, we performed a meta-analysis of the contradictory results from these relevant studies to clarify the possible associations between MDM4 gene polymorphisms and cancer risk.

Characteristics of the included publications

A total of 149 publications were identified after our initial search. After removing duplicates and screening the titles and abstracts, 128 publications were removed. Finally, 21 publications were selected for further full text review. The following publications were excluded: four [31–34] in which the experimental designs were not case control studies; two publications [35, 36] that did not describe MDM4 polymorphisms (rs4245739, rs1563828, rs11801299, rs10900598, and rs1380576) and cancer risk, three [37–39] that not provide detailed genotyping data, and two [28, 40] that might have described partially overlapping populations, so we included the study [28] with the larger sample size. We finally identified 11 eligible publications [13, 21–30] including 56 studies (18,910 cases and 51,609 controls) in this meta-analysis. Selection for eligible publications included in this meta-analysis was presented in Figure 1. The characteristics of these included studies are summarized in Table 1. These publications were published from 2011 to 2015. Five single nucleotide polymorphisms (SNPs) (rs4245739, rs1563828, rs11801299, rs10900598 and rs1380576) of MDM4 gene were investigated. Genotype distributions of the controls about rs1380576 in one study [26] did not conform to HWE (P < 0.001). The NOS scores of all included studies ranged from 5 to 7 stars, suggesting that they were studies of high methodological quality. Four papers [13, 22, 27, 28] were carried out in Caucasian populations, and seven [21, 23–26, 29, 30] in Asian populations. The research [27] conducted by Garcia-Closaset et al. consisted of three genome-wide association studies (GWASs) involving 40 studies among Caucasian populations. 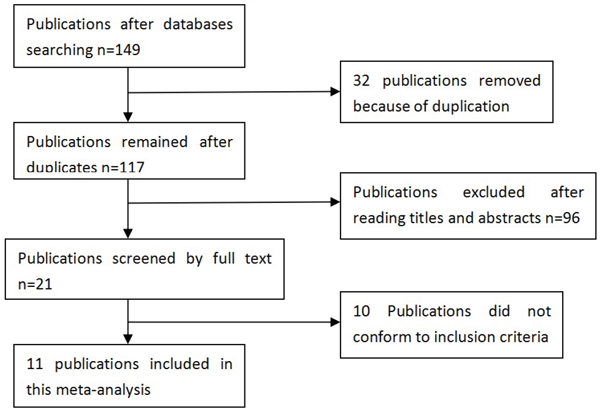 Table 2: Meta-analysis of associations between the rs4245739 polymorphism and cancer risk 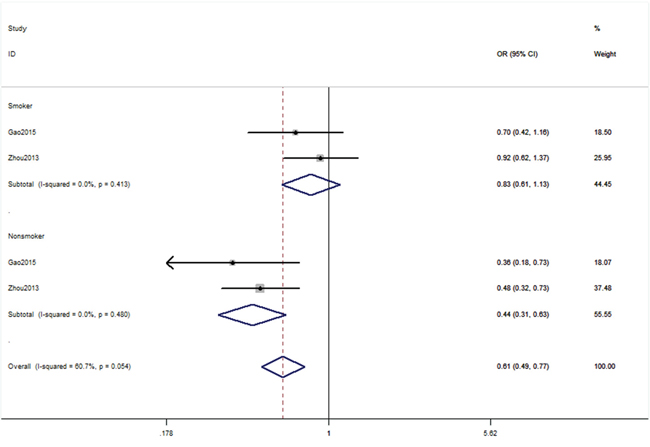 One of most important tumor suppressors in human cells is p53. MDM2, a key regulator of the p53 tumor suppressor signaling pathway, can induce degradation of p53 through the ubiquitin-proteasome pathway [41]. MDM4 is structurally homologous to MDM2, and MDM4 can cooperate with MDM2 to inhibit p53 activities [10]. Furthermore, MDM4 can interact with MDM2 via the Really Interesting New Gene finger domain that inhibits the degradation of MDM2 protein [12, 42]. In light of these findings, we hypothesize that MDM4 may play pivotal roles in the pathogenesis of cancer, and that MDM4 is a candidate susceptibility gene for cancer. Currently, many studies [13, 21–30] have investigated the associations between MDM4 gene polymorphisms and cancer risk. However, these studies showed inconsistent results, because they had inadequate statistical power due to relatively small samples.

Stratification analyses of ethnicity suggested rs4245739 decreased the risk of cancer in Asian population. The genetic background of cancer may vary among different ethnicities. We did not find that rs4245739 was associated with the risk of cancer in Caucasians, although three GWAS studies [27, 37, 38] reported that this SNP increased the risk of ER-negative or triple negative breast cancer (defined by the absence of ER, progesterone receptor and human epidermal growth factor receptor-2) in the Caucasian population. In this meta-analysis, a large difference was found in the distribution of rs4245739 between Caucasians and Asians, with minor allele frequencies of 26.2% and 6.2%, respectively, and this was possibly affected by the power of the studies conducted in Asian populations and the final relationships between the rs4245739 polymorphism and cancer risks among different racial groups [13]. Furthermore, the etiology of ER-negative breast cancer is different from that of ER-positive breast cancer, including differences in genetic predisposition [43, 44]. Therefore, it is reasonable to assume that the genetic susceptibility of ER-negative or triple negative breast cancer is different than those of other breast cancer subtypes or overall breast cancer, which may explain why the results of these GWAS studies in Caucasians are different from the results of this meta-analysis in Caucasians. The reasons why rs4245739 decreased the risk of cancer among Asian population may be that the functional rs4245739 SNP A>C locating in the MDM43’-untranslated (3’-UTR) region creates a miR-191-5p or miR-887-3p targeting sites [23]. MiR-191-5p and miR-887-3p could bind to MDM43’-UTR with the rs4245739 C allele selectively [23]. These changes could result in decreased expression of oncogene MDM4, which could reduce the inhibition of p53 activities. Stratification analyses of smoking status indicated that rs4245739 decreased the risk of cancer among nonsmokers. Two studies [21, 29] investigating SCLC and ESCC were included in those stratification analyses. The studies also revealed significant multiple interactions between rs4245739 and smoking. Notably, SCLC and ESCC share similar environmental etiologies such as heavy smoking.

Regarding the remaining four SNPs, we failed to identify any associations between rs1563828, rs11801299, rs10900598, and rs1380576 and cancer risk. We cannot definitively conclude that these four SNPs are not associated with cancer risk, because this meta-analysis included only a few studies with limited sample sizes, and any associations between gene polymorphisms and disease are greatly affected by the number of participants. Given the limited sample size, the relationships between these four SNPs and cancer risk should be interpreted with caution. Genotype distributions of the controls in one study [26] on rs1380576 did not conform to HWE. After excluding this study, the conclusions of the remaining studies did not significantly change, suggesting that the result of rs1380576 was trustworthy.

Several potential limitations of this meta-analysis should be considered. First, our data indicated that publication bias existed with respect to studies regarding rs4245739, and potential language bias may have resulted from the inclusion of published studies in English or Chinese only. Second, the number of studies on rs1563828, rs11801299, rs10900598, and rs1380576 included in the meta-analysis was small, and the sample size was limited, which prevented further stratification analyses of other potential factors. Third, our results were based on unadjusted estimates for confounding factors, which might have affected the final results. Fourth, we could not assess potential gene-gene and gene-environment interactions because of the lack of original data. Fifth, this meta-analysis only included Asian and Caucasian populations; future studies on other ethnic groups are necessary because of ethnic differences in gene polymorphisms. Sixth, heterogeneity was considerable in this meta-analysis because the included studies involved different ethnicities and environments. Although sensitivity analyses indicated that our data were stable and trustworthy, we should interpret these data with caution.

In conclusion, this meta-analysis indicates that rs4245739 polymorphism of MDM4 gene plays important roles in cancer pathogenesis, especially among Asian populations. Stratification analyses also indicate that rs4245739 decreases the risk of cancer among nonsmokers. However, the other four SNPs are not associated with cancer risk. Larger well-designed studies are necessary to validate these findings.

We systematically searched the PubMed, Embase, and China Knowledge Resource Integrated Database to identify studies through January 1, 2016. The following search terms were used: “cancer,” ‘‘carcinoma,’’ ‘‘neoplasm,’’ ‘‘tumor,’’ ‘‘MDM4,’’ ‘‘MDMX,’’ ‘‘HDMX,’’ ‘‘polymorphism,’’ ‘‘SNP’’ and ‘‘polymorphisms’’. Two independent authors conducted the search. No language or other restrictions were placed on the search. Additional initially omitted studies have been identified by hand screening.

Criteria of inclusion and exclusion

The included studies conformed to the following criteria: (1) studies that evaluated the associations between cancer risk and MDM4 gene polymorphisms (at least one of the five polymorphisms), (2) studied on human beings, (3) study provided sufficient data to calculate the odds ratios (ORs) and 95% confidence intervals (CIs), and P value, and (4) case-control study. Exclusion criteria were: (1) duplication of previous publications; (2) case reports or review articles; (3) studies without detailed genotype data.

Relevant information was carefully extracted from all eligible studies. The extracted information including: name of first author, publication year, country of origin, ethnicity, numbers of cases and controls, and cancer type. Two authors independently performed the extraction of data and assessed the study quality based on the Newcastle-Ottawa Scale (NOS) [45]. Total NOS scores ranged from 0 to 9. A score ranging 5 to 9 stars is considered to be a generally high methodological quality whereas a score ranging 0 to 4 is regarded as a relatively poor quality. All disagreements were discussed and resolved with consensus.

All statistical analyses were performed using the Stata 11.0 software (StataCorp, College Station, TX, USA). The strength of associations between MDM4 gene polymorphisms and cancer risk were estimated for each study by crude ORs and 95% CIs. Stratification analyses were carried out by ethnicity, cancer type, sex and smoking status. P < 0.05 was considered statistically significant. When a significant Q test (P < 0.1) or I2 < 50% indicated heterogeneity across studies, a fixed-effect model was used. Otherwise, the fixed-effects model was applied [46]. Pooled ORs were calculated for allele model, dominant model, recessive model, homozygous model, and heterozygous model. We performed sensitivity analyses by omitting each study in turn to determine the effect on the test of heterogeneity and evaluated the stability of the overall results. Hardy–Weinberg equilibrium (HWE) was assessed in the controls using Pearson’s χ2 test. Potential publication bias was assessed by Begger's and Egger’s linear regression test [47]; P < 0.05 was considered to indicate statistically significant.

This study was supported by National Natural Science Foundation of China, No. 81371927.

42. Linares LK, Hengstermann A, Ciechanover A, Muller S, Scheffner M. HdmX stimulates Hdm2-mediated ubiquitination and degradation of p53. Proceedings of the National Academy of Sciences of the United States of America. 2003; 100:12009-12014.

45. Stang A. Critical evaluation of the Newcastle-Ottawa scale for the assessment of the quality of nonrandomized studies in meta-analyses. European journal of epidemiology. 2010; 25:603-605.