*Both authors have shared co-first authorship

Conclusions: Our results demonstrated that decreased FOXF2 expression is an independent predictive factor for poor prognosis of patients with NSCLC, especially in stage I NSCLC.

Lung cancer is by far the main cause of cancer-related death. It is the most frequently diagnosed cancer and the leading cause of cancer death in males and the second in females [1, 2]. Lung cancer is usually classified into two main types: small cell lung cancer (SCLC) and non-small cell lung cancer (NSCLC) depending upon the microscopic appearance of the tumor cells. NSCLC is the most common type of lung cancer, accounting for 85% of all lung cancers diagnosed [3]. Currently, for NSCLC patients, the most accurate prognostic factors are tumor size, node, and tumor-node-metastasis (TNM) staging. However, as a heterogeneous disease, even with similar clinical and pathological features, and similar TNM stage, patients with NSCLC may have different outcomes due to distinct inherent biological characteristics of the tumor. Therefore, new prognostic factors are needed to be determined to better predict the outcome of lung cancer and provide a potential improvement in better treatment, especially within a given TNM stage.

Forkhead box F2 (FOXF2) is a member of Forkhead box transcription factors family, which is characterized by a highly conserved 110 amino acid DNA binding domain [4] and function as an activator or inhibitor of gene transcription [5]. Human FOXF2 was initially identified in 1994 [6], and the gene is located at 6p25.3 [7]. FOXF2 was found to have a relatively restricted high-expression limited to the adult lung and transactivated pulmonary surfactant proteins A, B, and C (SPA, SPB, and SPC) [8]; however, later studies revealed it had a more widespread expression [9]. FOXF2 plays an important role in embryonic development [10, 11], extracellular matrix synthesis [11] and epithelial-mesenchymal interaction [9], and the knockout of foxf2 mice present with cleft palate or a range of defects, including megacolon, colorectal muscle hypoplasia and agangliosis.

In cancer, FOXF2 has been considered as a potential tumor suppressor. In our previous studies, decreased FOXF2 expression was associated with early-onset metastasis and poor prognosis for patients with triple-negative breast cancer [12], and further studies showed that FOXF2 can inhibit epithelial-mesenchymal transition (EMT) and metastasis of basal-like breast cancer by targeting TWIST1 [13] and FOXC2 [14] directly. In prostate cancer, FOXF2 mRNA was decreased [15, 16] compared to normal prostate tissues, and it is a potential target genes of miR-182-5p, which promotes cell invasion and proliferation by down- regulating FOXF2, RECK and MTSS1 genes [17]. And in breast cancer FOXF2 is a target gene of miR-301, which acts as a crucial oncogene to promote metastatic tumor progression [18]. The evidence given above indicates FOXF2 may act as a tumor suppressor in tumorigenesis and metastasis.

However, the role of FOXF2 in lung cancer is unknown, especially in NSCLC. In this current study, our results showed that mRNA of FOXF2 was significantly decreased in NSCLC tissues compared to paired normal lung tissues. Additionally decreased FOXF2 mRNA expression was associated with poor prognosis in Stage I NSCLC patients, and it could predict poor prognosis for patients with Stage I NSCLC independently. 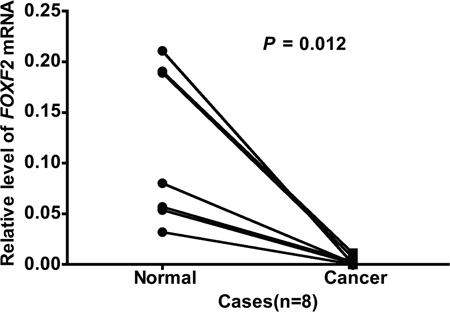 Figure 1: Comparison of FOXF2 mRNA expression in paired lung tumor tissues and normal tissues. The mRNA of FOXF2 was significantly decreased in cancer tissue compared with paired normal lung tissue in all 8 cases.

Correlation between the mRNA level of FOXF2 and clinicopathologic factors

To establish the link between FOXF2 mRNA levels in primary tumors and clinicopathological features of lung cancer, we analyzed the FOXF2 mRNA levels among different clinicopathologic groups. No significant difference of FOXF2 mRNA levels was found in patients with different gender, age, histology, clinical stage, family history, and smoking history (P > 0.05, Table 1). Although no significant difference was found among the three tumor size groups (P = 0.063, Table 1), the mRNA of FOXF2 in the size ≤3cm group was significantly higher than in the size > 7cm group (P = 0.037, Table 1).

Table 1: Association of FOXF2 mRNA levels with clinicopathological factors in patients with NSCLC 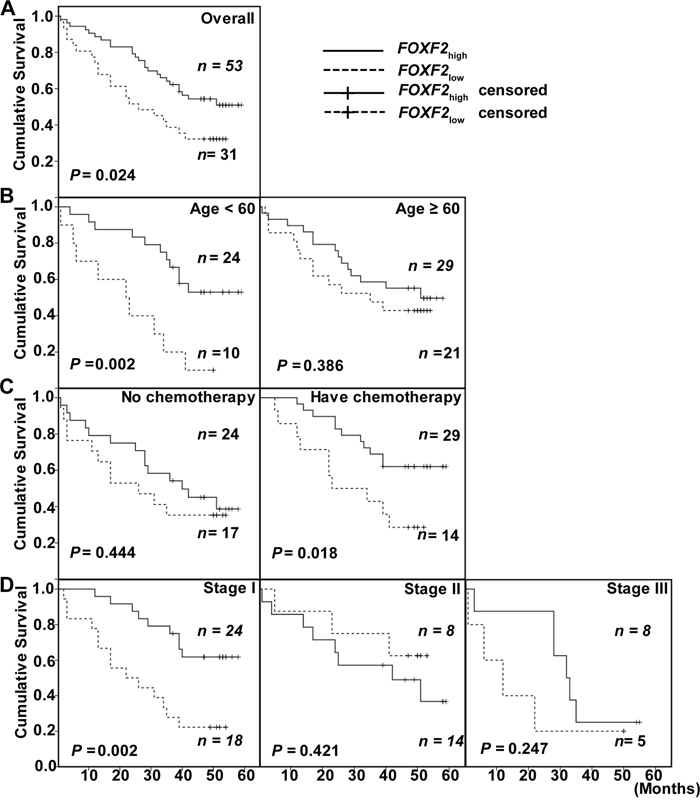 Table 2: Univariate and multivariate Cox models for the association between survival and clinicopathological factors in patients with NSCLC

Table 3: Univariate and multivariate Cox models for the association between survival and clinicopathological factors in patients with stage I NSCLC 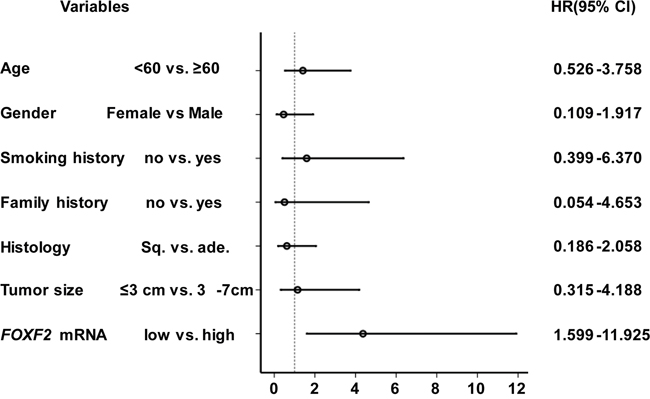 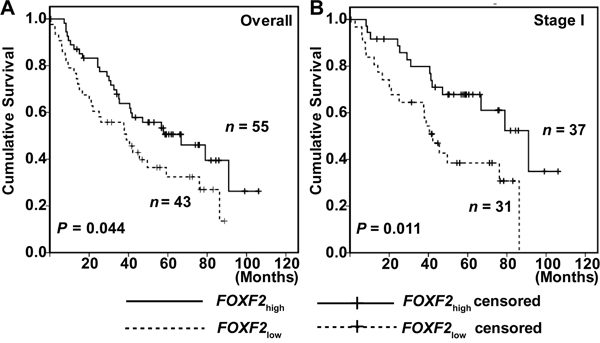 Forkhead proteins are a large family of transcription factors and are commonly associated with development. Recent studies have shown that the FOX transcription factors play important roles in tumor progression in several types of cancers [21–32]. In our present study, the mRNA level of FOXF2 was found to be decreased in primary lung cancer compared with paired normal lung tissue, and it negatively correlated with the size of lung cancer. Furthermore, low expression of FOXF2 was associated with the worst outcome of NSCLC patients with clinical stage I. And two independent validation studies (n = 98 and n = 1928 respectively) confirmed our findings. So we suppose FOXF2 is a predictor of NSCLC prognosis.

It has been reported that FOXF2 plays an important role in epithelial-mesenchymal interactions [9] and inhibition of Foxf2 leads to loss of collagen synthesis [11]. This indicates FOXF2 is an important regulator in extracellular matrix (ECM) production and remodeling [11]. FOXF2 modulates ECM balance and remodeling through regulating the balance between MMPs and TIMPs [15, 16]. In prostate cancer, MMP1 was down-regulated by FOXF2 whereas TIMP3, one of MMPs inhibitors, was up-regulated by FOXF2. Additionally, in prostate cancer, FOXF2 has an opposite regulatory effect with TGFβ3 pathways [15, 16], which is described as triggering EMT via MMP-dependent mechanisms [33, 34]. In our previous study, we found that FOXF2 is a novel EMT-suppressor [13] and decreased FOXF2 is associated with poor prognosis of patients with basal-like breast cancer [12]. Our current results show FOXF2 levels were decreased in lung cancer tissue and its down-regulation is associated with the increased tumor size. It is possible that the decreased FOXF2 leads to an imbalance in matrix synthesis/degradation and provides a suitable environment for the growth and metastasis of cancer cells and leads to a worse outcome at last. So FOXF2 might be a tumor suppressor and work by maintaining the balance of ECM and inhibition of EMT. However, recent studies showed Foxf2 induced robust EMT, migration, invasion and metastasis in lung cancer cells [35], and inhibition of miR301 enhances Akt-mediated cell proliferation and FoxF2 is a regulatory target for miR301 [36]. Thus, further investigations are required to identify the role of FOXF2 in lung cancer and other cancer types.

The most common cause of lung cancer is long-term exposure to tobacco smoke [37, 38]. Tharappel et al. have shown that cigarette smoke exposure leads to quantitative increases in DNA binding activities of Foxf2 after only 10 days in mice [39]. In the present study, although there is no statistical significance, the expression of FOXF2 mRNA in the non-smoking group is higher than in the smoking group. However, the effect of smoke on FOXF2 in lung cancer needs to be investigated furtherly.

All 92 lung tissues, including 84 lung cancer and 8 paired normal lung tissues, were collected from lung cancer patients (age range: 40-79; mean age: 62) without preoperative chemotherapy. Patients underwent complete resection of cancer followed by radiotherapy (6 cases), paclitaxel plus cisplatin chemotherapy (43 cases), combined radiation and chemotherapy (13 cases), or supportive care only from June 1995 to January 2005 at Tianjin Cancer Hospital, China. Of these cases, primary cancers and paired normal lung tissues were collected in 8 cases, and only primary cancer samples were obtained in the other 76 cases. Tissue samples were diagnosed as NSCLC using hematoxylin and eosin (H&E) staining, and only samples with 75% or more tumor cells in primary tumors were selected for quantitative real-time RT-PCR. Clinical staging of cancer was determined according to American Joint Commission for Cancer (AJCC)/International Union Against Cancer (UICC) TNM staging system and 42, 22, 13, and 7 patients present with stage I, II, III, and IV, respectively. The use of these tissues was approved by the Institutional Reviewing Board and the Research Committee, and written consent was obtained from all participants. Disease-free survival (DFS) time was defined as the time from primary surgery to any relapse (local-regional, contra-lateral and/or distant), death or terminal time of follow-up without any relapse events. Another dataset including 17 normal lung tissues and 98 lung cancer tissues from patients with complete follow-up data according to the study of Bhattacharjee [19] acts as an independent validation. A large cohort including 2,437 samples of ten independent datasets was used by the online survival analysis software [20].

Tissue specimens from cancer were snap-frozen in liquid nitrogen within 30 minutes after dissection and then stored at –80°C. RNA was extracted with TRIZOL reagent (Life technologies, Gaithersburg, MD, USA) according to the manufacturer’s instructions. Five μg of total RNA were used to perform RT for the first-strand cDNA synthesis. In brief, RNA was denatured for 5 minutes at 65°C and snap-cooled on ice in the presence of 0.5 μg Oligo (dT) and 10 mmol dNTP mix, followed by incubation at 4°C for 50 minutes with First-Strand Buffer, 0.2 μmol DTT, 40 U RNaseOUT ribonuclease inhibitor and 200 U SuperScript II in total volume 20 μL reaction system. Reactions were stopped by incubation at 70°C for 15 minutes.

Real-time PCR analysis was performed using the Platinum® Quantitative PCR SuperMix-UDG (Life Technologies) according to the manufacturer’s instructions. Primers and Taqman probes of FOXF2 and the housekeeping gene, glyceraldehyde-3-phosphate dehydrogenase (GAPDH), were used as previously described [12]. Assays were performed with the ABI 7500 TaqMan system (Applied Biosystems, Foster City, CA, USA). PCR was carried out after incubation at 50°C for 2 minutes and pre-denaturing at 95°C for 3 minutes followed by 40 cycles at 95°C for 30 s and 58°C for 1 minute. Quantitation of the expression of the target gene in samples was accomplished by measuring the fractional cycle number at which the amount of expression reaches a fixed threshold (CT). The relative quantitation was given by the CT values, determined by triplicate reactions for test and reference samples for the target gene and for GAPDH. Triplicate CT values were averaged and the GAPDH CT was subtracted to obtain ΔCT. The relative expression level of the target gene was determined to be 2–ΔCT.

We thank Yian Wang (Department of Surgery and the Siteman Cancer Center, Washington University School of Medicine) for the constructive comments and critical review of the manuscript.

The Authors do not have any conflicts of interest.