Lung cancer is a major public health concern worldwide, causing as many deaths as next four most deadly cancers combined (breast, prostate, colon, and pancreas). Non-small cell lung cancer (NSCLC) is the commonest lung cancer histology, comprised primarily of adenocarcinoma and squamous cell carcinoma [1]. In China, lung cancer has replaced liver cancer to become the leading cause of cancer-related deaths and accounted for 29% of all male cancer deaths and 23% of all female cancer deaths, totally approximately 220,5200 deaths, in 2014 (World Health Statistics, WHO, 2014). It has been established that multiple environment (mainly cigarette smoking and asbestos) and genetic factors are involved and gene-environment interactions exist in the development and process of lung cancer [2–4].

In the past few years, several genetic variants and loci have been identified to be the genetic risk factors of lung cancer [5–9]. However, to date, these known common loci only explain a small fraction of the familial risk of lung cancer. Hence it is vital to investigate the remaining missing heritability to understand the development and process of lung cancer. The TOX3/LOC643714 locus on chromosome 16q12.1 was one of the first breast cancer regions identified through genome-wide association study (GWAS) in populations of European and East Asian origin [10]. The chromosomal region spanning the 5’ end of TOX3, the intergenic region between TOX3 and LOC643714, and the entire coding part of LOC643714 are located in a 133 kb linkage disequilibrium (LD) block [11]. LOC643714 is an uncharacterized gene of unknown function [http://www.ncbi.nlm.nih.gov/gene/643714]. Identified first in a screen for transcripts containing trinucleotide repeat expansions, TOX3 gene, also termed trinucleotide repeat containing 9 (TNRC9), belongs to the high-mobility group (HMG) family of nonhistone chromatin proteins, indicating its potential role as a transcript factor [12] and involvement in bending and unwinding of DNA and alteration of chromatin structure [13]. TOX3 is largely expressed within the brain in the frontal and occipital lobe, the central nervous system (CNS), and the ileum in normal human tissues. Through interaction with the cAMP-response-element-binding protein (CREB), TOX3 regulates Ca2+-dependent neuronal transcription [14]. The overexpression of TOX3 induces transcription involving isolated estrogen responsive elements and estrogen-responsive promoters, and protects neuronal cells from cell death caused by endoplasmic reticulum stress or BCL2-Associated X Protein (BAX) overexpression through the induction of anti-apoptotic transcripts and repression of pro-apoptotic transcripts [15].

Though the known etiology and carcinogenesis of lung cancer are different from that of breast cancer, the patients of the two diseases could be treated by some common chemotherapeutic agents such as taxanes (paclitaxel and taxotere), vincristine (Navelbine, NVB), and platinum-containing anticancer drugs (cisplatin and carboplatin). Most importantly and interestingly, a recent meta-analysis based on four lung cancer GWAS in populations of European ancestry, the MD Anderson Cancer Center (MDACC) GWAS, the Institute of Cancer Research (ICR) GWAS, the National Cancer Institute (NCI) GWAS, and the International Agency for Research on Cancer (IARC) GWAS, identified a rare variant of BRCA2 gene, a well-known risk factor for breast, ovarian, and aggressive prostate cancers, to an increased risk of squamous cell lung cancer among cigarette smokers, suggesting that lung cancer and breast cancer are linked at a molecular and genetic level to a certain extent [44].

Totally, 352 unrelated patients and 407 unrelated controls were recruited from Southwestern China for the case-control study. No female cigarette smokers were gathered. The general descriptive characteristics of the study population were given in Table 1. The median number of pack-years of combined cases and controls was utilized as the cut-point to stratify the cigarette smoking subjects. As shown in Table 1, there were no significant difference in gender and age between the controls and cases. As expected, cases smoked more cigarettes (P < 0.001). The distribution of tumour types among the patients was as follows: adenocarcinoma, 42.05%; squamous cell carcinoma, 28.13%; other non-small cell carcinoma, 16.19%; and small cell carcinoma, 13.64%.

c The median number of pack years of combined cases and controls were utilized as the cut-point.

d Restricted to males only.

Table 2: Distribution of the alleles of the 16 SNPs at the TOX3/LOC643714 locus between controls and cases in the study 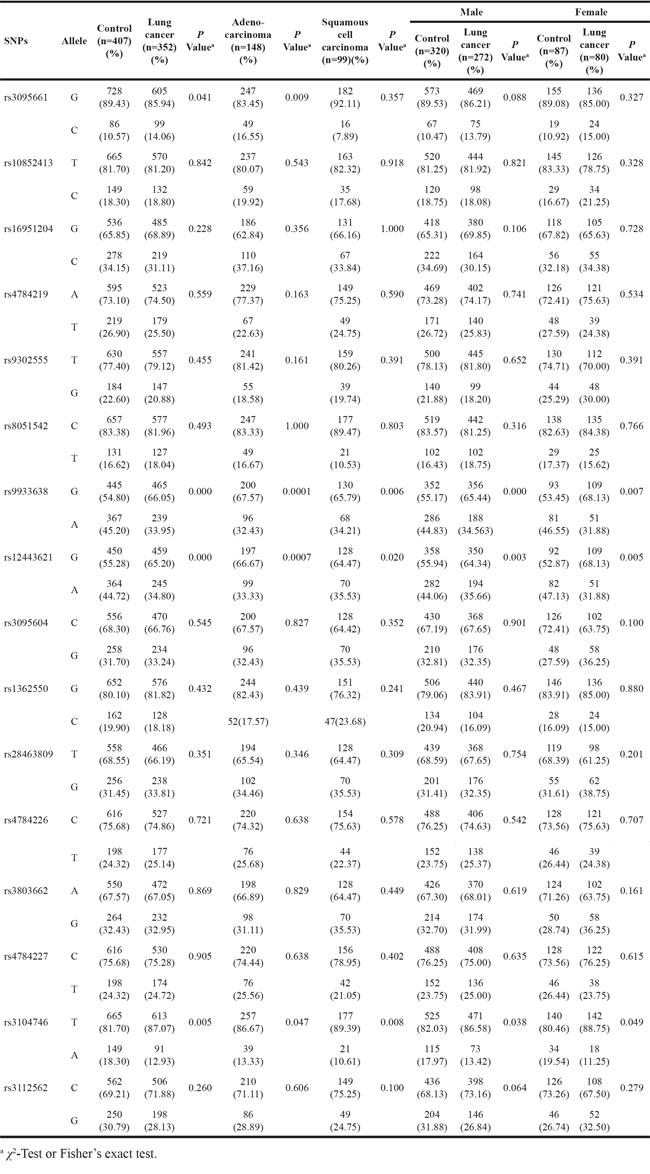 a χ2-Test or Fisher’s exact test.

b Adjusted by age, gender, and cigarette smoking.

b χ2-Test or Fisher’s exact test.

c Adjusted by age and gender.

Lung cancer is one of the major causes of cancer-related death worldwide. Besides environmental factors, inherited genetic variants or polymorphisms are also involved in lung cancer risk. In the case-control study, the genotyping of the 16 SNPs at the TOX3/LOC643714 locus in a Han Chinese population revealed that rs9933638/rs12443621 and rs3104746 might contribute to risk of lung cancer. To our best knowledge, the study discovered for the first time that the previously identified breast cancer susceptibility-associated SNPs at the TOX3/LOC643714 locus were risk factors of lung cancer.

The TOX3/LOC643714 locus was one of the first breast cancer regions identified through GWAS in populations of European and East Asian origin [10]. In the recent years, quite a few of SNPs at the TOX3/LOC643714 locus including rs3803662, rs3104746, rs8051542, rs4784227, rs12443621, rs3112612, rs3112562, rs3104793, rs8046994, rs3104788, and rs3104767, were demonstrated to be independently associated with elevated risk of breast cancer and the other human diseases [16–43]. Of the SNPs mentioned above, only rs12443621 and rs3104746 were found to be significantly associated with increased risk of lung cancer in the study. Initially, Pearson’s chi-square test or Fisher’s exact test revealed that rs9933638 were strongly associated with lung cancer risk (Table 2), confirmed by logistic regression analyses in which lung cancer risk of individuals with rs9933638GG was shown to be 2.57 and 1.51 times higher than that of individuals with rs9933638GA and rs9933638AA, respectively. In addition, lung cancer risk of rs9933638(GG+GA) carriers was demonstrated to be 1.89 times higher than that of rs9933638AA carriers (Table 3). The findings suggested that individuals with the allele G of rs9933638 were susceptible to lung cancer in a dose-dependent manner. To validate the findings, rs12443621, the previously identified breast cancer risk factor of Chinese population [25, 28, 37] and covered by the haplotype block represented by rs9933638, was genotyped in the study. The genotyping data showed that the allele G of rs12443621 was also a risk factor for lung cancer (Table 2), verified by the stratification analysis which revealed that subjects with rs12443621GG and rs12443621GA had an increased risk of lung cancer compared with individuals with rs12443621AA (Table 3). The validation results strongly confirmed that rs9933638, representing a haplotype block covering rs12443621, was associated with risk of lung cancer. Most importantly, rs12443621, the previously determined breast cancer risk factor of Chinese population [25, 28, 37], was discovered to be a lung cancer risk factor of Chinese population in the study provided new evidences that lung cancer and breast cancer are linked at a molecular and genetic level at least in part in Chinese population, which may help to explore the novel carcinogenesis mechanisms.

There are several limitations in the study. First, due to the fact that most of lung cancer patients recruited were characterized to be poorly differentiated (316/352, 89.77%) and most of patients with NSCLC were identified at advanced stages (276/304, 90.79%), we tried but failed to clarify the association of the 16 SNPs with histological grade and stage of patients with lung cancer. Second, the subjects of the study were recruited only from Southwestern China, large-scale studies are required to clarify the association of the SNPs at the TOX3/LOC643714 locus with lung cancer risk in the other Han Chinese populations.

In summary, the present study discovered for the first time that rs9933638/rs12443621 and rs3104746, the previously identified breast cancer susceptibility-related SNPs at the TOX3/LOC643714 locus, contributed to the individual’s risk to lung cancer in the Southwestern Han Chinese population. The findings provided additional evidences that lung cancer and breast cancer are correlated at a molecular and genetic level at least in part in Chinese population.

Patients (n = 352) with primary lung cancer diagnosed from September 2007 to December 2008 were recruited from the Institute of Human Respiratory Disease of Xinqiao Hospital, the Third Military Medical University. All patients were newly diagnosed, histologically confirmed and previously untreated. 407 age- and sex frequency-matched healthy control samples were collected from individuals at the Centre of Physical Examination of Xinqiao Hospital between November 2007 and December 2008. The exclusion criterion for the control group was any history of cancer. All of the subjects were unrelated at least within three generations. After explaining the purpose and procedures of the study, all participants signed a written informed consent form, completed a detailed questionnaire regarding their smoking habits, and donated 5 ml peripheral blood. Blood samples were drawn into Na-EDTA tubes from all subjects and stored at -70°C for genomic DNA extraction. The study was approved by the Ethical Committee of Xinqiao Hospital, the Third Military Medical University.

Totally, 16 SNPs at the TOX3/LOC643714 locus were selected in the study. Of the 16 SNPs, six SNPs (rs8051542, rs12443621, rs3803662, rs3104746, rs3112562, and rs4784227) were selected based on the published references in which these SNPs were suggested to be susceptible to breast cancer or the other human diseases and the other 10 SNPs were selected from the genetic variation data for TOX3 gene obtained from the HapMap project for 45 healthy Chinese Han Beijing (CHB) adults (www.hapmap.org). Haplotype blocks, representing regions inherited without substantial recombination in the ancestors of the current population, were constructed throughout the entire TOX3 gene using Haploview (version 4.0, Broad Institute of MIT and Harvard, Cambridge, MA) [45]. The history of recombination between a pair of SNPs can be estimated with the use of the normalized measure of allelic association D’ (value of D prime between the two loci) [46, 47]. The criterion for the selected SNPs to construct a haplotype block is that all SNPs in one region must be in strong LD with D’ > 0.98 for the upper 95% confidence bound and > 0.7 for the lower bound. A maximally informative htSNP was then selected from each block using the software Tagger program (http://www.broad.mit.edu/mpg/haploview). This algorithm selects a subset of variants that capture all known common genetic variations in the TOX3 gene based on a LD threshold of r2 ≥ 0.8. The inverse of r2 represents the ratio of sample size needed to detect an indirect association with an un-analyzed SNP to direct association at the same power.

The authors thank the patients and healthy controls who participated in this study for their willingness to contribute to the advancement of science.