Stereotactic body radiation therapy (SBRT) is a radiotherapy modality that delivers highly conformal, ablative doses to a well-defined target. Here, using a semiquantitative multiplexed assay to analyze ATM and H2AX phosphorylation, we show that ATM kinase activity in peripheral blood mononuclear cells is induced following SBRT. This observation of a systemic ATM kinase-dependent DNA damage response in the peripheral blood is unprecedented and promotes the use of ATM serine-1981 phosphorylation as a predictive biomarker for DNA damaging modalities and ATM inhibitors.

Over half of the 1,638,910 Americans diagnosed with cancer in 2012 received radiotherapy. Stereotactic body radiation therapy (SBRT) is a treatment modality that relies upon target localization and motion compensation to deliver a conformal, ablative dose of radiation. While external beam radiotherapy is typically delivered in 25-40, 1-2 Gy fractions, 5 days per week, SBRT is delivered in 1-5, 8-36 Gy high dose fractions on nonconsecutive days. Although there is rapid dose fall-off from tumor into normal tissues, blood flow through the targeted volume is not restricted. We examined the induction of the DNA damage response in peripheral blood mononuclear cells (PBMCs) in blood drawn from patients before and after the first fraction of SBRT.

Since the majority of cancer therapies are DNA damaging, there is a pressing need for pharmacodynamic biomarkers of DNA damage. Histone H2AX serine-139 phosphorylation generates gamma-H2AX which was originally associated with the induction of DNA double strand breaks (DSBs)[1]. While it is now clear that gamma-H2AX is induced by agents that do not induce DSBs [2, 3], gamma-H2AX remains a widely used biomarker of DNA damage [4]. ATM is a kinase that initiates DNA damage signaling following exposure to ionizing radiation (IR) and other agents that induce DSBs. ATM kinase activity is associated with ATM serine-1981 phosphorylation in cells [5]. ATM serine-1981 phosphorylation is induced following 5 cGy [6] and facile extraction makes this phosphoprotein an excellent candidate biomarker.

To demonstrate the utility of ATM as a biomarker, we developed a semiquantitative multiplexed immunoblot to analyze ATM serine-1981 phosphorylation, total ATM protein, gamma-H2AX and H2AX. Human cancer cells were irradiated and whole cell extracts were resolved by SDS-polyacrylamide gel electrophoresis. Separate PVDF membranes were co-immunoprobed with anti-phosphoserine-1981 ATM and anti-pan-ATM antibodies as well as anti-gamma-H2AX and anti-H2AX antibodies. A dose-dependent induction of ATM serine-1981 phosphorylation was detected in the cancer cell lines HT29 (colorectal), H460 (lung), and MDA-MB-231 (breast), and this induction was greater than that of gamma-H2AX at each dose (Figure 1A-C). 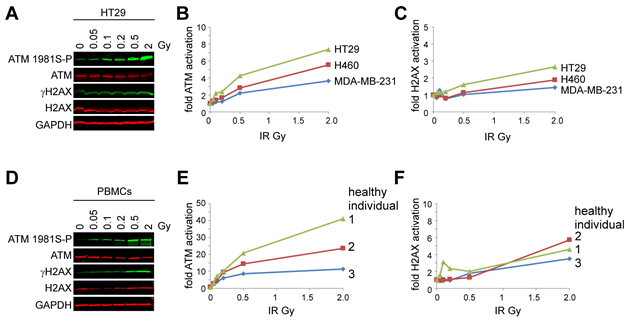 SBRT induced ATM serine-1981 phosphorylation and gamma-H2AX 5.3-fold and 3.7-fold, respectively, in a patient with inoperable non-small cell lung cancer (NSCLC) (Figure 2A). The prescribed planning target volume (PTV) was 15.1 cm3 with 18 Gy per fraction for a maximum of 20 Gy within the target volume and a beam-on time of 164 seconds. The maximum and mean dose to the heart was 2.0 and 1.0 Gy, respectively. Assuming the heart contains 280 cm3 of a total blood volume of 4,500 cm3, PBMCs within the heart of this patient received 6 cGy (280/4,500 x 1 Gy). This approximation is consistent with the 5 cGy that induces ATM serine-1981 phosphorylation in fibroblasts [6] and PBMCs (Figure 1E).

SBRT induced ATM serine-1981 phosphorylation and gamma-H2AX 4.1-fold and 1.4-fold, respectively, in a patient treated following pancreatectomy for pancreatic adenocarcinoma (Figure 2B). The prescribed PTV was 17.5 cm3 with 12.0 Gy per fraction for a maximum of 13.9 Gy within the target volume and a beam-on time of 904 seconds.

SBRT induced ATM serine-1981 phosphorylation 3.2-fold in a patient with metastatic renal cell carcinoma with bone metastases (Figure 2C). No induction of gamma-H2AX was observed. The prescribed PTV was 126.3 cm3 with 8.0 Gy per fraction for a maximum of 9.4 Gy within the target volume and a beam-on time of 171 seconds.

SBRT induced ATM serine-1981 phosphorylation and gamma-H2AX 1.2-fold and 2.8-fold, respectively, in a patient treated for adenocarcinoma of the gastroesophageal junction post esophagectomy (Figure 2D). The prescribed PTV was 10.2 cm3 with 8.0 Gy per fraction for a maximum of 9.0 Gy within the target volume and a beam-on time of 100 seconds. 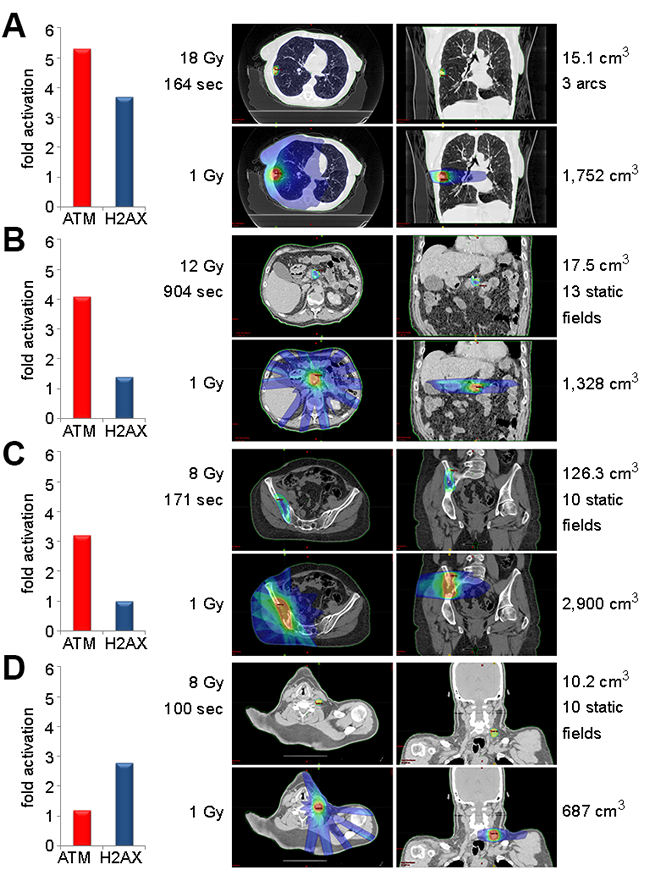 Finally, it has long been postulated that systemic ATM kinase inhibition may be an excellent means to increase the efficacy of targeted radiotherapy [8, 9]. Our data show, for the first time, that even the most guided radiation therapy is associated with a systemic DNA damage response. Therefore, systemic ATM kinase inhibition may be associated with DNA damage injury in circulating PBMCs. In this regard the absence of detectable ATR expression in PBMCs [10] is interesting because it suggests that the biological responses to DNA damage in PBMCs may be strictly dependent on ATM and as such ATR kinase inhibition may be a better means to selectively increase the efficacy of targeted radiotherapy. Our observation of a systemic ATM kinase-dependent DNA damage response through the peripheral blood following SBRT is unparalleled and promotes the use of ATM serine-1981 phosphorylation in evaluating the biological effects of DNA damaging modalities and ATM inhibitors.

Human blood (~8.0 mL/tube) was drawn into Cell Preparation Tubes (CPT) (Becton Dickinson, Franklin Lakes, NJ) during a single venipuncture event in accordance with an Institutional Review Board (IRB) protocols (#PRO13020420, #PRO10020482, #PRO10050157, #PRO11010576). PBMCs were isolated by centrifugation at 1500 x g for 30 min at room temperature (RT). The PBMC layer was transferred to a new 15 mL polypropylene conical tube and washed with 3-4 volumes of Plasma-Lyte A USP. The cells were pelleted by centrifugation (430 x g for 10 min at RT). The PBMCs were resuspended in 3.0 mL of Plasma-Lyte A. Immediately, 20 microliters of the cell suspension was removed and used to estimate PBMC density with a Beckman Coulter Z1 particle counter before an additional wash of 10 mL in Plasma-Lyte A. After re-pelleting, aspiration and disposal of the supernatant, the PBMC density was adjusted to 3 x 106 cells/mL in Plasma-Lyte A. Single-use aliquots of 0.5 mL were then transferred into new 2.0 mL micro-tubes. Lastly, the PBMCs were recovered as cell pellets by centrifugation (10,000 x g for one min at RT), and flash-frozen in a dry ice/ethanol bath before storage at −70 °C until use. To preserve specimen integrity, all CPT tubes were processed within three hours of collection.

To avoid bias in protein levels due to possible plasma protein contamination, PBMC lysates were normalized by cell number [11]. Aliquots of 25 microliters (5 x 105 cells) were loaded per well onto 4-15% TGX Criterion™ 18-well precast gels in a Criterion™ vertical midi-format electrophoresis cell (Bio-Rad Laboratories, Hercules, CA). Proteins were fractionated under a constant 200 V applied for ~40 min. Resolved proteins were electrophoretically transferred onto 0.45 micrometer Immobilon-FL polyvinylidene difluoride (PVDF) transfer membranes (Millipore, Billerica, MA) with 100 V applied for 1.5 h in a Criterion blotter transfer tank (Bio-Rad Laboratories, Hercules, CA). Following electroelution transfer, membranes were rinsed with water and incubated in 0.5x Odyssey® blocking buffer (20 mL/membrane) for 1 h at RT with gentle agitation. The membranes were cut horizontally into three strips. The top membrane strip (above 75 kDa) was co-immunoprobed with an anti-phosphoserine-1981 ATM and anti-pan-ATM antisera mixture diluted to 1:500 and 1:2500, respectively, in 0.5x Odyssey® blocking buffer containing 0.1% Tween 20 (OBB-T). The middle membrane (25-75 kDa) was immunoprobed with anti-GAPDH diluted 1:20,000 in OBB-T. Likewise, the bottom membrane strip (below 25 kDa) was simultaneously probed with a biotinylated monoclonal rabbit anti-gamma-H2AX antibody and a mouse monoclonal anti-H2AX antibody, each diluted to 1:1000 in OBB-T. Membranes were incubated overnight at 4 °C with gentle agitation. After removing the antisera, the membranes were rinsed with TBS, washed thrice with 50 mL of TBS-T, for periods of 10 min each. The ATM membrane was immunoprobed with highly cross-absorbed anti-IgG detection antibodies that were individually matched to the specific host species in which the primary ATM antibodies were generated. The individual detection antisera mixture antibodies, a goat anti-rabbit IgG and a goat anti-mouse IgG antibody were labeled with NIR fluorochrome dyes (800 and 700 nm) and diluted 1:4000 and 1:5000, respectively. The H2AX membrane was similarly probed except both antisera in the mix were diluted 1:5000 and in addition, the mixture included streptavidin conjugated to an 800 nm fluorophore diluted 1:10000. All detection reagents were prepared in OBB-T containing 0.02% (w/v) SDS. The strips were incubated in the dark for 1 h at RT with gentle agitation. After incubating, and washing thrice for 5 min each in 50 mL of TBS-T, to remove Tween-20, membranes were washed twice more for 10 min in 50 mL of TBS. All five washes were carried out undulating in the dark at RT. Before proceeding, membranes were dried at RT for at least 1 h in the dark.

Dry membrane strips were visualized using an Odyssey® CLx infrared imaging system (model 9120). Signal quantification was performed utilizing the version 2.1 Image Studio software (LI-COR Biosciences-US, Lincoln, NE). Shapes were drawn around bands of interest, and the signal was calculated as the sum of the individual pixel intensity values (Total) for the selected shape minus the product of the average intensity values of the pixels in the background (Bkg) and the total number of pixels enclosed by the shape (Area). Thus, Signal = Total – (Bkg x Area). The selected background value applied for each individual shape was the median of three pixels above and below the shape. The ratio of the phosphorylated to pan-protein signal was used to correct for loading variations between lanes.

2. de Feraudy S, Revet I, Bezrookove V, Feeney L and Cleaver JE. A minority of foci or pan-nuclear apoptotic staining of gammaH2AX in the S phase after UV damage contain DNA double-strand breaks. Proceedings of the National Academy of Sciences of the United States of America. 2010; 107(15):6870-6875.