Porcine reproductive and respiratory syndrome virus (PRRSV) is the etiologic agent of PRRS that causes reproductive failure in sows, severe respiratory distress and high morbidity and mortality in piglets [1]. PRRSV is a single positive-strand RNA virus of the Arteriviridae family that replicates its RNA genome on the endoplasmic reticulum derived membrane structure [2, 3]. PRRSV infection induces mitochondrial dysfunction, leading a collapse of the mitochondrial transmembrane potential and raises the content of reactive oxygen species [4].

In human, the mutations of phosphatase and tensin homolog (PTEN)-induced putative kinase 1 (PINK1) and Parkin are linked to autosomal recessive forms of Parkinson’s disease [13, 14]. Later researches have uncovered their functional role in selective elimination of damaged mitochondria, termed as mitophagy [15]. PINK1 is maintained at low level through rapid degradation by mitochondrial protease in the N-terminal rule [16]. However, during mitochondrial stress, PINK1 stabilizes on the mitochondrial outer membrane and recruits cytosolic Parkin to mitochondria [17]. Once translocated to mitochondrial surface, Parkin mediates the engulfment and subsequent degradation of mitochondria by autophagosome. 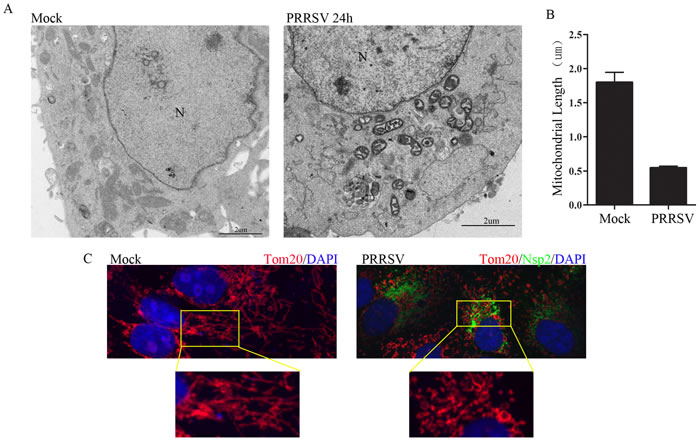 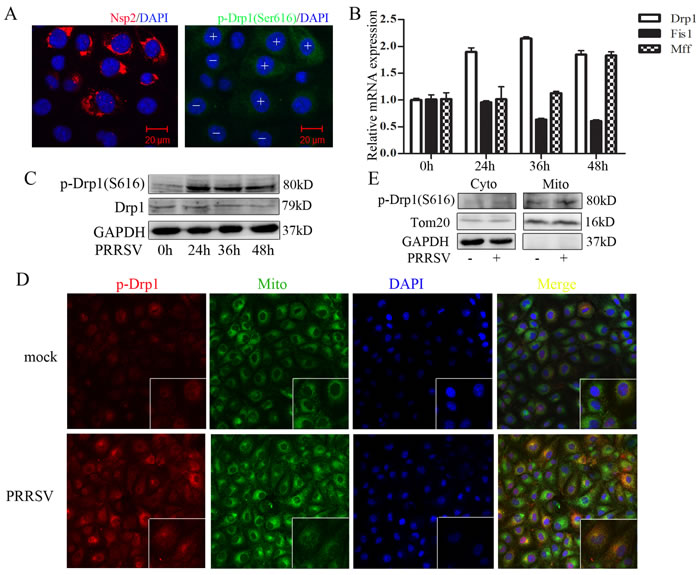 To investigate the possible effect of PRRSV infection on mtDNA copy, we quantified the relative mtDNA copy number as the ratio of mtDNA cytochrome c oxidase subunit I (COI) to 18S rDNA [21]. As shown in Figure 3A, the total number of mitochondria was drastically diminished in PRRSV-infected cells as compared to the uninfected group, which is in line with the result from Tom20 expression. Considering that mitochondria are excluded from cell by mitophagy, we further investigated whether PRRSV stimulates the expression of mitophagy-related genes. PRRSV infection modestly but significantly increased the expression of Parkin and PINK1 at both mRNA and protein levels (Figure 3B and 3C). We have previously shown that PRRSV up-regulated LC3 II expression [22], which is a reliable indicator of autophagic process. Activating transcription factor 4 (ATF4) was also stimulated by PRRSV infection (Figure 3B). ATF4 is a transcriptional factor that triggers Parkin expression via unfolded protein response (UPR) [23]. Parkin translocates to mitochondria is a well-characterized event that triggers mitophagy [24]. To further assess PRRSV-induced mitophagy, we utilized purified mitochondria and cytosolic fraction of PRRSV-infected and uninfected-Marc145 cells to evaluate Parkin translocation. Western Blot analysis of these fractions is presented in Figure 3D. Parkin was markedly enriched in the mitochondrial fraction of PRRSV-infected cells. To monitor the complete mitophagy in PRRSV-infected cells, a dual fluorescence vector encoding a mitochondrial targeting sequence fused with mRFP and EGFP was used. We observed predominantly a yellow color in uninfected cells indicating the mitochondria in cytoplasm, whereas in PRRSV-infected cells, most of the mitochondria displayed red color which is the representative of the delivery of damaged mitochondria to lysosome (Figure 3E). Relative quantification of the co-localization of mRFP and EGFP is shown in Figure 3F. To further substantiate that PRRSV-induced mitophagy is Parkin-dependent, we assessed LC3 II expression in cytosolic and mitochondrial fraction in Parkin silencing cells. The results showed that LC3 II markedly decreased in mitochondrial fraction in Parkin silencing cells (Figure 3G). These results suggest that Parkin-dependent mitophagy was induced by PRRSV infection. 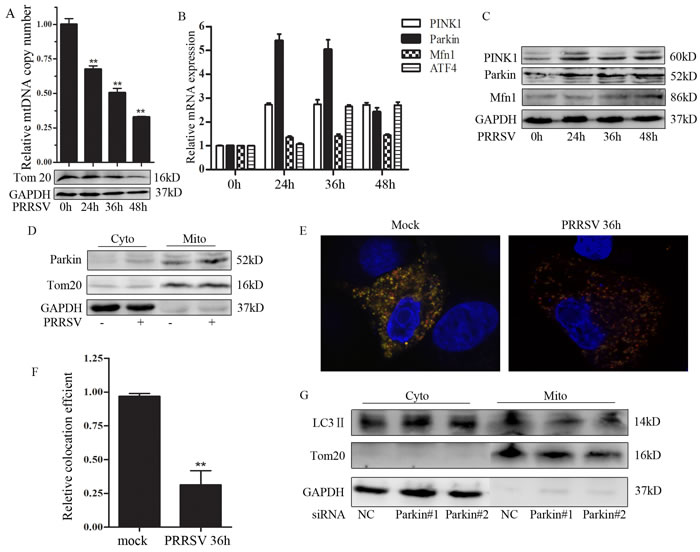 To evaluate the functional role of Drp1-dependent mitochondrial fission and Parkin-dependent mitophagy in mtDNA copy and PRRSV replication, we employed the siRNA strategy to silence the expression of Drp1 and Parkin. We first verified the silencing efficiency of Drp1 and Parkin by Western Blot (Fig 4A). Among the three siRNAs of Parkin, siRNA #1 and siRNA #2 were effective, so we chose them for further investigation. It has been shown that PRRSV infection resulted in the depletion of mtDNA copies (Figure 3A). Here, we further examined the effect of silencing Drp1 or Parkin on PRRSV-induced mtDNA depletion. Interference of Drp1 expression profoundly exacerbated PRRSV-induced mtDNA depletion (Figure 4B). Whereas, silencing of Parkin robustly blocked PRRSV-induced mtDNA depletion (Figure 4C). To characterize the functional significance of Drp1 and Parkin in PRRSV replication, we determined PRRSV replication in Drp1- or Parkin-silencing cells. As shown in Figure 4D and 4E, intracellular viral non-structural protein 2 (Nsp2) was decreased in Drp1- or Parkin-deficient cells, indicating the functional role of Drp1-dependent mitochondrial fission and Parkin-dependent mitophagy in PRRSV replication. 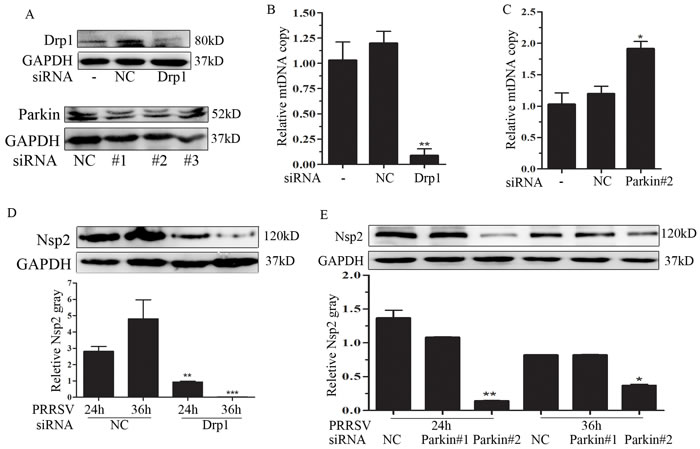 Figure 4: Drp1 and Parkin affects mitochondrial copy and PRRSV replication. A. Marc145 cells were transfected with negative control (NC) or specific siRNA targeting Drp1 or Parkin. At 24h post-transfection, the silencing effect was determined. B. and C. The DNA were extracted from Mock-, NC-, Drp1- and Parkin-transfected cells and subjected to mitochondrial copy determination by qPCR. D. and E. The effect of Drp1 and Parkin silencing on PRRSV replication were determined by Western Blot. Nsp2 protein gray was quantified by Image J. Data are expressed as means with SEM of three independent experiments. *, P < 0.05; **, P < 0.01; ***, P < 0.001.

Mitochondrial dynamic is closely linked to apoptosis [25, 26]. Caspases are a family of cysteine proteases that play a vital role in apoptosis and inflammation, demonstrated by their cleavage activation [27]. Depletion of Drp1 or Parkin induced robust activation of caspase 3 and substantial cleavage of poly (ADP-ribose) polymerase (PARP), a substrate of caspase 3 (Figure 5A). Induction of apoptosis was also substantiated by caspase 3 activity assay (Figure 5B). In order to exclude the impact of siRNAs on cell viability, cell viability was tested by trypan blue exclusion. The results indicated that there was no significant difference on cell viability between NC-transfected cells and Drp1- or Parkin-transfected cells (Figure 5C). Together, these results strongly suggest that PRRSV-mediated induction of mitochondrial fission and mitophagy, although serving as a quality control mechanism to eliminate dysfunctional mitochondria, also protects PRRSV-infected cells from apoptotic cell death, and facilitating persistent viral infection. 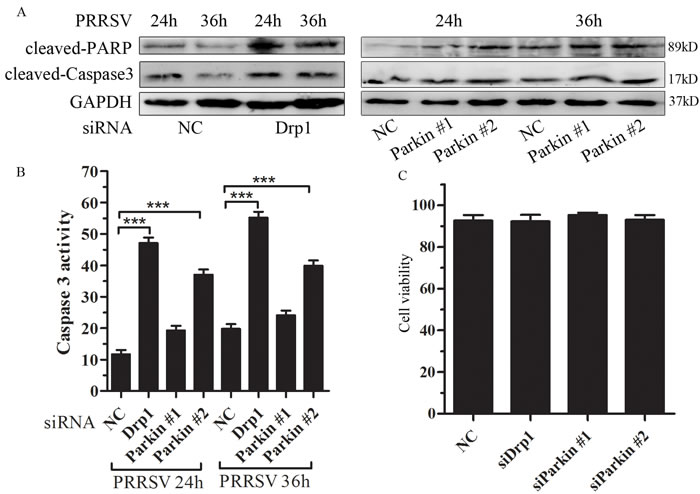 Figure 5: Disruption of mitochondrial fission and mitophagy lead to induction of apoptosis. A. and B. Drp1 and Parkin silencing accelerates PRRSV induced apoptosis. Marc145 cell were transfected with negative control (NC) or specific targeting Drp1 or Parkin and infected with PRRSV. At 24h and 36h postinfection, apoptosis was analyzed by Western Blot (A) and Caspase 3 activity (B). C. Marc145 cells were seeded in 12-well plate for 24h and transfected with indicated siRNAs for other 24h, cells were collected and detected cell viability by trypan blue straining. Data are expressed as means with SEM of three independent experiments. ***, P < 0.001.

Many DNA and RNA viruses have been shown to tightly regulate the autophagy process to prevent their clearance by host cell, to evade host immune response, or to favor its replication [32]. Recently, several researches including our group have been shown that PRRSV facilitates bulk autophagy to favor its replication [22, 33-35]. Several viruses including Hepatitis C virus [36], Oncolytic measles virus [37] and Newcastle disease virus [38] have been confirmed to subvert mitophagy to facilitate their own proliferation. Here, we found that PRRSV infection induced Parkin-dependent mitophagy (Figure 3). siRNA-mediate interference of Parkin mitigated PRRSV proliferation (Figure 4E). Our data suggests a functional interaction between PRRSV and autophagy pathway providing evidence that selective autophagy is probably involved in promoting PRRSV replication. Previous study has demonstrated that NOD-RIP2 signaling was inducible during PRRSV infection [39]. The research from Lupfer et al. have indicated that NOD-RIP2 signaling play an essential role in regulation of Influenza A virus-induced mitophagy, which exclude the role of Parkin in this process [40]. This suggests that diverse mitophagy signaling is exploited by viruses to their own benefits. Illumination of the functional relevance of mitophagy and virus replication will provide new therapeutic strategies to resist virus infection.

Marc145 cells that is a clone of the African green monkey kidney cell line MA-104, were obtained from China Center for type Culture Collection (CCTCC) and cultured in Dulbecco’s modified Eagle’s medium (DMEM) supplemented with 10% fetal bovine serum (FBS), 100 U/ml penicillin, and 100 g/ml streptomycin at 37 °C in a humidified 5% CO2 incubator. PRRSV strain WUH3, which was adapted to Marc145 cells at a MOI of 0.5. Virus stocks of PRRSV were prepared in Marc145 cells and infectious virus titer was analyzed in Marc145 cells using the Reed and Muench method [42]. For virus infection, cells were initially incubated with PRRSV for 1 h at 37 °C. After 1 h of adsorption, cells were exchanged to the medium containing 5% FBS and cultured for indicated time.

Total cellular RNA were extracted from cells using Total RNAeasy kit (Omega, R6834-01), subsequently, complementary DNAs (cDNAs) were synthesized by using First-Strand Synthesis System (Thermo Scientific, #00238582) according to the manufacturer’s instructions. To analyze the expression level of mitochondrial DNA, total cellular DNA was extracted from the cells using DNA kit (Qiagen, M1116) and subsequently quantified by qPCR. All PCR was performed under the following conditions: 95°C for 3 min followed by 40 cycles of 95°C for 10s, 60°C for 20s. SYBR Premix ExTaqTM kit (Bio-Rad, #172-5121) was used according to the manufacturer’s instructions, and the real-time PCR was performed on an iQ5 Real-Time PCR system (Bio-rad). The real-time PCR results were analyzed and expressed as relative expression of CT (threshold cycle) valuing the 2−ΔΔCt method. All primer pairs used for RT-PCR are presented in Table 1.

The whole cell lysate were extracted with RIPA buffer containing 1% protease inhibitor PMSF, 1% cocktail (SIGMA, P8340) and 1% phosphatase inhibitor (SIGMA, P0040). Mitochondria were separated by using a Mitochondria/Cytosol Fractionation Kit (Beyotime, C3601), according to the instruction. 10-12% SDS-PAGE gels was used to separate proteins and then transferred to polyvinylidene fluoride (PVDF) membranes (Bio-rad). The membranes were blocked with 5% nonfat milk and incubated with the primary antibody overnight at 4°C. Membranes were washed and incubated with HRP-conjugated secondary antibody. The proteins were detected by the enhanced chemiluminescence (ECL) system (Bio-Rad) following the manufacturer’s instructions. The relative expression normalized GAPDH was calculated in Image J software (NIH).

The Marc145 cells were grown on glass cover slips and transfected with indicated plasmid DNA, fixed in 4% paraformaldehyde, washed, and then permeabilized with 0.1% TritonX-100. The cells were incubated with the indicated antibodies. Wherever indicated, nuclei are stained with DAPI. Images were visualized under a 63× or 100× oil objective using a confocal microscope.

Briefly, Marc145 cells and PRRSV-infected cells grown in 35mm dishes were washed and fixed with fixative containing 2% glutaraldehyde in 0.1M sodiun cacodylate buffer. Cell pellets were embedded in 2% agarose, post-fixed with 1% osmium tetroxide, and dehydrated with an ethanol series. Samples were infiltrated, embedded in Durcupan and polymerized at 60°C for 48h. Ultrathin sections were prepared and examined using Tecnai transmission electron microscope.

All experiments were performed independently three times, and data were presented as the means with SEM. Data were analyzed by One-way ANOVA followed by Tukey’s Honest Significant difference test with SPSS version 16.0 (SPSS, Chicago, IL, USA). P value < 0.05 was considered as statistically significant.

We thank Professor Liurong Fang for providing us the Nsp2 antibody, Professor Changchun Li for providing help for cell culture and Pei Zhang from The Core Facility and Technical Support, Wuhan Institute of Virology, for her help with producing EM micrographs.

2. Huang Y and Meng X. Novel strategies and approaches to develop the next generation of vaccines against porcine reproductive and respiratory syndrome virus (PRRSV). Virus research. 2010; 154:141-149.

17. Narendra D, Tanaka A, Suen DF and Youle RJ. Parkin is recruited selectively to impaired mitochondria and promotes their autophagy. The Journal of cell biology. 2008; 183:795-803.

29. Zorzano A, Liesa M and Palacín M. Role of mitochondrial dynamics proteins in the pathophysiology of obesity and type 2 diabetes. The international journal of biochemistry & cell biology. 2009; 41:1846-1854.