Carfilzomib/pomalidomide single-agent or in combination with other agents for the management of relapsed/refractory multiple myeloma: a meta-analysis of 37 trials

Purpose: The use of carfilzomib/pomalidomide single-agent or in combination with other agents in patients with refractory/relapsed multiple myeloma (RRMM) was not clearly clarified in clinical practice. We sought to compile the available clinical reports to better understand the efficacy and safety of carfilzomib (CFZ) and pomalidomide (POM).

Methods: We searched published reports including carfilzomib and (or) pomalidomide therapy for RRMM who had received bortezomib and (or) lenalidomide.

In the past decades, the administration of novel agents (thalidomide lenalidomide and bortezomib) had produced a pronounced shift in the treatment framework for myeloma patients. And, treatment options and corresponding patient outcomes had greatly improved because of them. However, myeloma still remained incurable, and most patients would ultimately relapse and resist these agents [1]. Relapsed disease was characterized by increasingly lower remission rate even following salvage therapy. And, survival among those in whom lenalidomide, bortezomib, and thalidomide have failed was especially poor [2]. So, there was still an urgent need for new treatments to improve outcomes for these patients with RRMM.

Meanwhile, several trials had demonstrated the activity of carfilzomib single, dual and triplet combination regimens [17, 18, 24-41]. However, which strategy would be the optimal therapy for patients with RRMM still remains undefined. Furthermore, these published reports consisted of the clinical trials with small sample sizes, and these small trials were not enough power to determine the efficacy and safety of pomalidomide and carfilzomib. The present pooled analysis highlighted the two most recently approved anti-MM agents, carfilzomib and pomalidomide, and looked ahead toward optimal regimens in patients with RRMM.

Characteristics of the published reports of carfilzomib and pomalidomide

Table 2: Summary of Response Outcomes from Carfilzomib and Pomalidomide 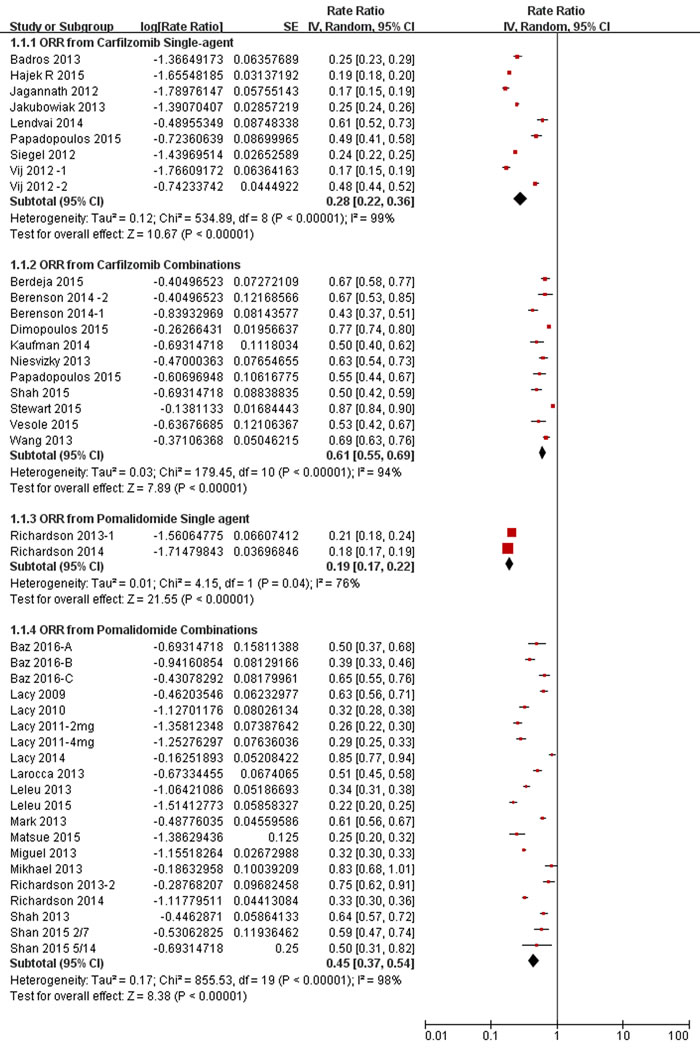 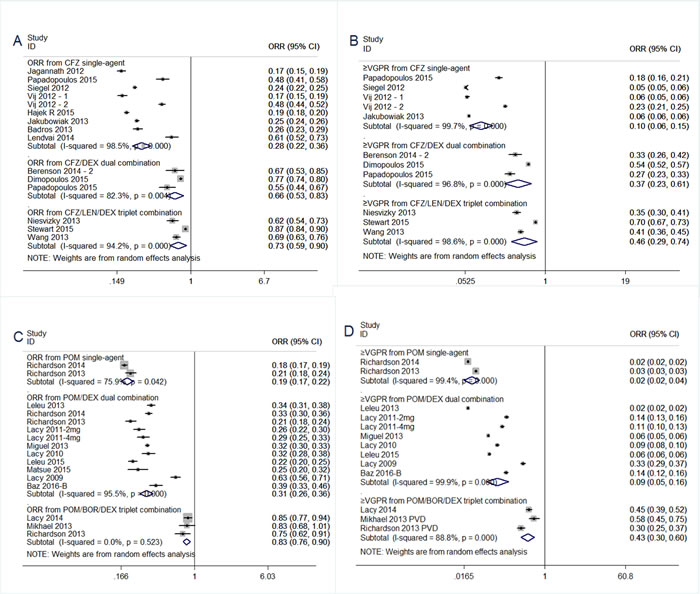 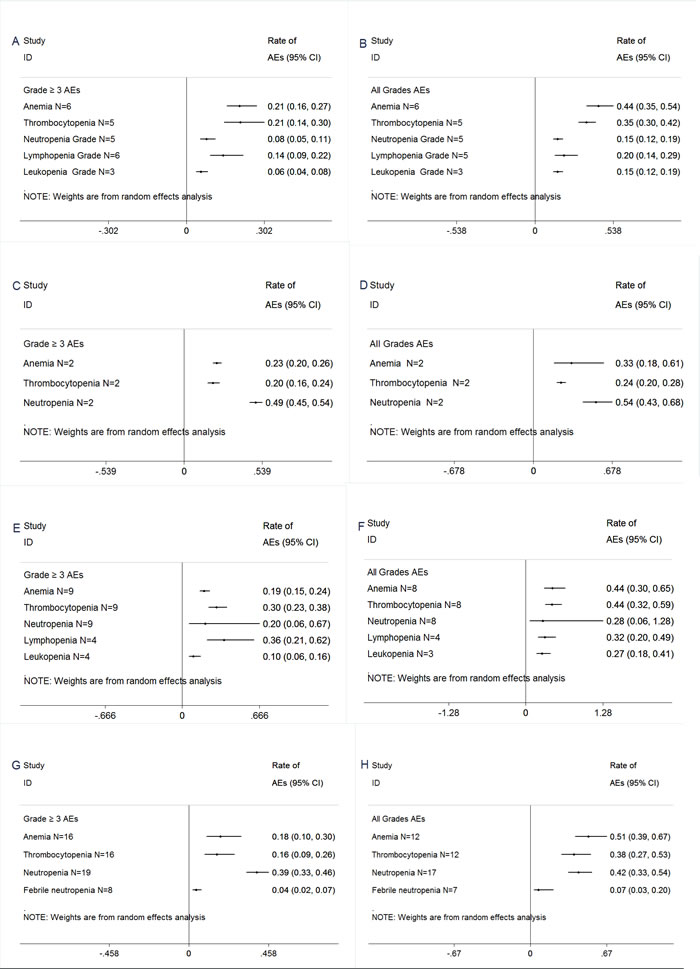 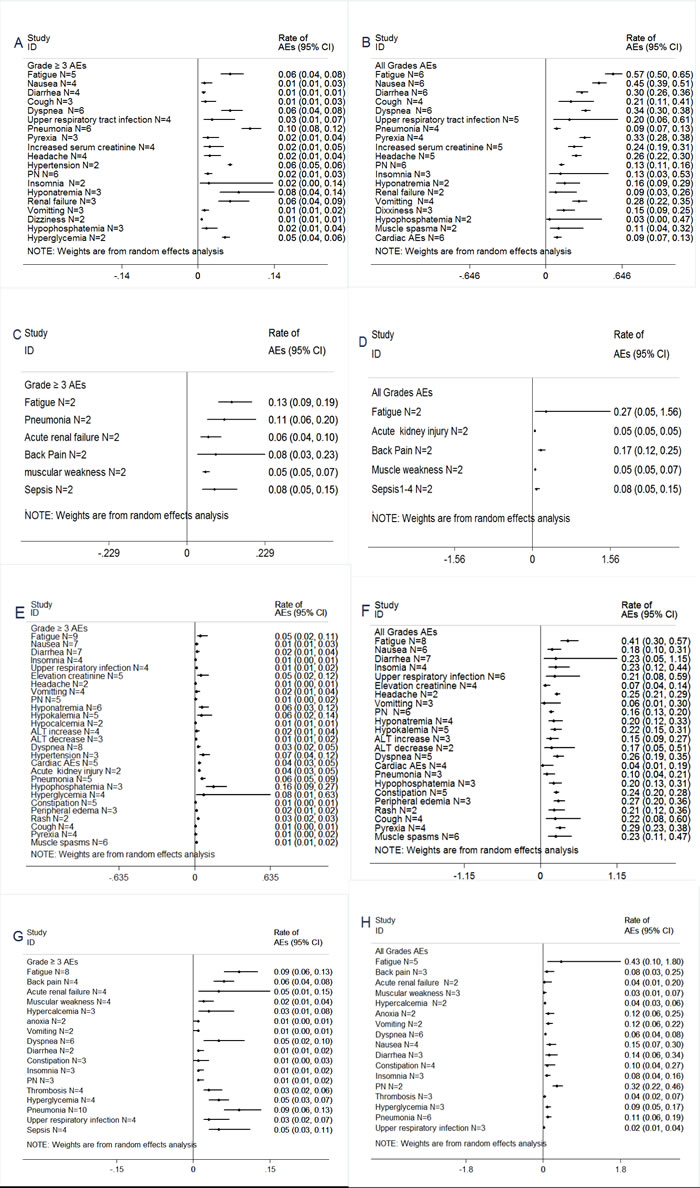 Although the proteasome inhibitor bortezomib was effective to treat myeloma patients, there were still some limits to the use of bortezomib, including occurrence of resistance and neuropathy. So, there was still a need for a second generation of proteasome inhibitors with greater efficacy and less toxicity. Carfilzomib was a potent and highly selective proteasome inhibitor, which seletively and irreversibly inhibits the chymotrypsin-like activity of the 20S proteasome. The efficacy and safety of single-agent carfilzomib had been evaluated in a series of phase 2 studies in patients with R/RMM. Because the number of patients enrolled in these trials was relatively small, we did this pooled analysis. In this aggregated analysis, the best ORR of single-agent carfilzomib for the response evaluable population was 28.0% and the CBR was 37.0%. These results reinforce the efficacy with carfilzomib monotherapy for a significant number of heavily pretreated patients. The minimal off-target activity characteristic and minimal neurotoxicity of carfilzomib supported it’s use in combination with other agent. Pooling three trials of CFZ/DEX dual combination regimen in the 501 relapsed/refractory patients, the 66% ORR attained with CFZ/DEX dual combination regimen was impressive, particularly when considering the 28% ORR achieved with single-agent carfilzomib in a similar population with R/RMM. Furthermore, there was no significant difference between the CFZ/DEX dual and CFZ/LEN/DEX triplet combination in ORR,≥VGPR,CBR,SDR analysis. So, CFZ/DEX dual regimen still should be good option for patients with RRMM.

Carfilzomib single agent was generally tolerable, with the majority of patients receiving the planned dose. The most common treatment-related AEs were gastrointestinal (nausea, diarrhoea, vomiting, and constipation), fatigue, dyspnea, and myelosuppression (thrombocytopenia, anaemia, and neutropenia). Peripheral neuropathy(PN) was reported infrequently. Comparison of tolerability between carfilzomib and bortezomib containing combination regimens should also be made with caution, but the difference in peripheral neuropathy was notable. Rates of grade ≥ 2 PN were 6.3% from CFZ/DEX dual combination vs 32.0% from POM/DEX dual combination(P < .0001) in ENDEAVOR trial [39]. The result was very encouraging, because PN was the main reason leading to discontinuation of bortezomib.

Preclinical study had shown that the efficacy of pomalidomide might be enhanced by the addition of dexamethasone. This current study pooled from 9 prospective trials of refractory multiple myeloma who received pomalidomide dual combination (POM+LoDEX) after failure of lenalidomide and bortezomib therapy, and strengthened the individual observations of each of these small prospective studies alone. The ORRs of 31% with POM+LoDEX was impressive, which compared favorably with 19% in the POM alone arm (Figure 2, Table 2), and 10% in the DEX alone [46], in consistent with the synergistic action of POM+LoDEX as observed in previous in vitro studies [47].And, the States Food and Drug Administration already approved pomalidomide in combination with dexamethasone in February2013 for patients with relapsed and refractory multiple myeloma. Recently, there were several trials of pomalidomide triplet combinations. When pooling three trials of POM/BOR/DEX triplet combination, an high ORR of 83% was achieved, which was superior to that of 31% (Table 2). This finding was impressive, and needed further validation in future trials.

When interpreting our results, there were some caveats that should be considered. The first and major problem was that we used abstracted data, whereas an individual patient data-based meta-analysis might define more clearly treatment efficacy of carfilzomib and pomalidomide. Secondly, as was often the case with meta-analysis, the effect of heterogeneity needed to be taken into account. Although all studies were discussed about the objective response of carfizlomib and pomalidomide after disease progression on lenalidomide and (or) bortezomib, the inclusion criteria were different among individual studies.

Medline, Embase, the Cochrane controlled trials register, the Science Citation Index, Conference proceedings from the American Society of Hematology(ASH), the European Hematology association (EHA) and the American Society of Clinical Oncology were searched for trials using the medical subject headings “myeloma”, “carfilzomib”, “pomalidomide”, “bortezomib” and “lenalidomide”. Reference lists from studies selected for this review, and from other published systematic reviews and practice guidelines were also hand-searched. The study was approved by the institutional review boards of Weifang People’s Hospital,in accordance with the Helsinki Declaration.

Studies were eligible for inclusion in the meta-analysis if they met all the following criteria: (1) They were published up to February, 2016 and written in English. (2) They dealt only with patients with refractory or relapsed multiple myeloma who had received bortezomib and (or) lenalidomide. (3) Study selection included the setting of these trials: carfilzomib/pomalidomide single-agent, dual and triplet combination regimens. (4) We included studies that provided sufficient information to allow the calculation of response rate. Multiple reports of a single study were considered as one publication, and only the most recent or complete article was examined. All potentially relevant articles were reviewed by two independent investigators (X.H.R and Y.D.Z.).

A random-effects model was used for all the analyses, which incorporates the variability of results among trials and provided a more conservative estimate of an effect size by producing greater confidence intervals (CIs) [45]. We tested for heterogeneity of between-study with the Cochrane χ2 test and quantified its extent with the I2 statistic. If significant heterogeneity existed, it would be appropriate to pool the data using random-effects model, but not fixed-effect model. All meta-analyses were completed using Stata ver. 12.0 software (College Station, TX) and Review Manager (version 5.3; Th e Cochrane Collaboration, Oxford, England). Statistical significance was defined as a P value of less than 0.05 for all tests.

We are indebted to Yanhua Sun for assistance with data analysis and critiquing the manuscript.

The authors declare no potential conflicts of interest, and did not receive any financial support.

The authors did not receive any financial support.