The incidence of human coronary heart disease (CHD) has recently been increasing year by year [1]. Percutaneous coronary intervention (PCI) and coronary artery bypass grafting (CABG) are the most common treatments for coronary heart disease [2]. Restenosis of the bridging vein can be suppressed by inhibiting mammalian target of rapamycin (mTOR), an atypical serine/threonine protein kinase that plays an important role in the regulation of cell proliferation [3–5].

siRNA-mediated downregulation of AP-1 decreased AP-1 and VEGF, but not mTOR levels 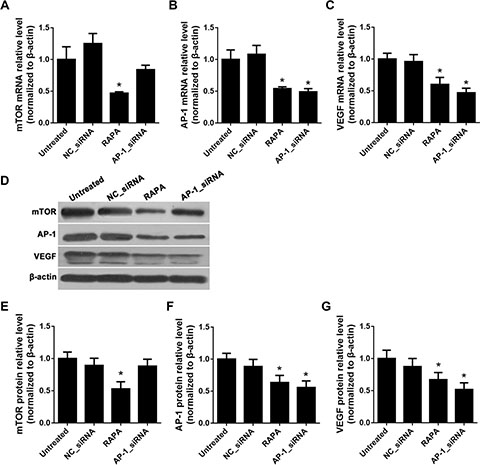 Effects of AP-1 or mTOR upregulation on mTOR, AP-1, and VEGF levels 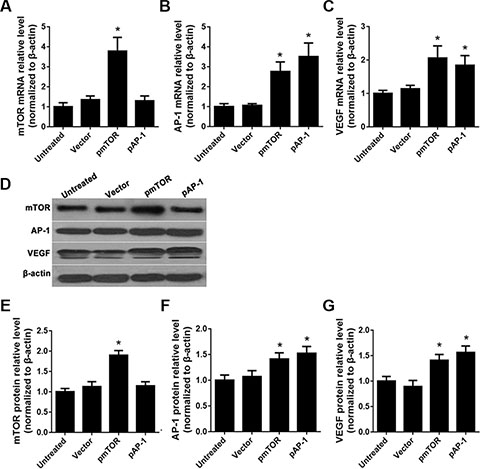 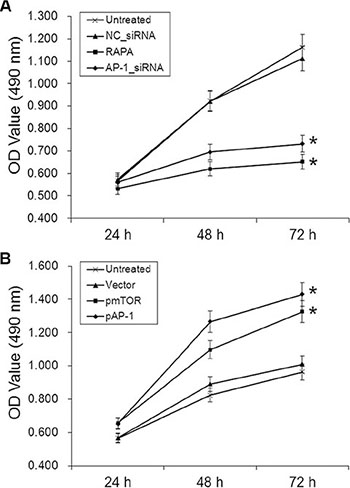 Effects of RAPA and pVEGF on mTOR, AP-1, and VEGF levels 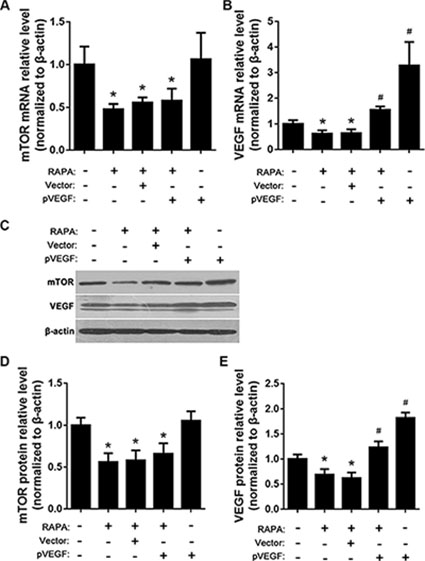 Mammalian target of rapamycin (mTOR) is an atypical Ser/Thr protein kinase that interacts with multiple growth factors and cytokines and participates in different signaling pathways to affect transcription and protein synthesis. mTOR, which is a downstream molecule of the PI3K/Akt/mTOR signaling pathway, is inhibited by rapamycin (RAPA). Vascular restenosis resulting from percutaneous coronary intervention (PCI) or coronary artery bypass grafting (CABG), as well as vascular endothelial cell growth, is inhibited by RAPA-induced mTOR suppression [11]. Vascular restenosis after PCI or CABG reduces survival rates and quality of life in patients with coronary heart disease, and vascular smooth muscle cell proliferation is a major cause of restenosis. Therefore, coronary heart disease patients are usually treated with RAPA to inhibit the proliferation and migration of vascular smooth muscle cells and thus prevent restenosis [12].

VEGF is a key growth factor that promotes vascular endothelial cell proliferation. RAPA inhibits VEGF expression in aortic endothelial cells and likely contributes to thrombosis in coronary artery disease patients implanted with RAPA-eluting stents [13]. Hudson et al. [14] found that RAPA-induced inhibition of HIF-1 alpha downregulated VEGF, resulting in an inhibition of tumor angiogenesis. However, the mechanism by which mTOR regulates VEGF is unclear. AP-1, an intracellular transcription activator, binds to the promoter region of the VEGF gene [15] and upregulates VEGF expression in many cancers, including head and neck cancer [16], breast cancer [17], colon carcinoma [18], and ovarian carcinoma [19]. In order to clarify the role of the mTOR signaling pathway in vascular endothelial cell proliferation, we used siRNA and overexpression vectors to down- or upregulate AP-1, mTOR, and VEGF in rat vascular endothelial cells (RAEC) and measured resulting changes in mRNA expression, protein levels, and cell proliferation. 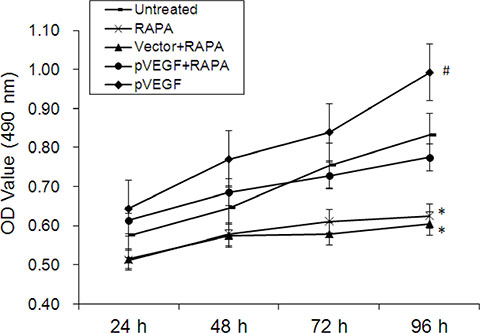 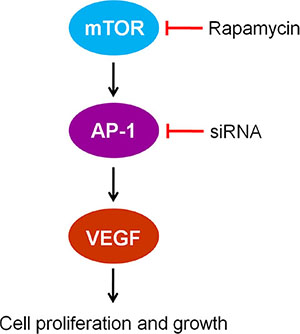 Transfection of siRNA and plasmid DNA

The sequences of siRNA targeting AP-1 (AP-1-siRNA) were as follows: sense 5′-UGUAGUGGUG AUGUGCCCAUUGCUGdTdT-3′, antisense 5′-CAGCA AUGGGCACAUCACCACUACAdTdT-3′. Rat AP-1, mTOR, and VEGF cDNA were all cloned into pEGFP-N3 vectors (Clontech, USA) to generate pAP-1, pmTOR, and pVEGF overexpression vectors; empty pEGFP-N3 was used as a vector control. The siRNA and plasmids were all designed or constructed by Biomics Biotechnologies Co., Ltd. (China). RAECs were transferred to cell culture plates and grown until they reached the logarithmic growth phase; when cells reached to 50 to 70% confluence, they were transfected with siRNA or plasmids using Lipofectamine® 2000 (Thermo Fisher, USA) according to the manufacturer’s instructions. All applicable groups were treated with 5 nM rapamycin (RAPA).

RAECs proliferation was measured with an MTT assay. RAECs were seed in a 96-well plate (1 × 104 cells/mL) and treated as described above for 0, 24, 48, 72, or 96 h. Ten μL of MTT (5 mg/mL; Promega, USA) was then added to each well followed by incubation at 37°C protected from light for 4 h. After incubation, MTT was removed and 100 μL of DMSO was added to each well. The absorbance value of each well was measured at a wavelength of 490 nm with a Microplate Reader (Bio-Rad, USA). All proliferation assays were performed in triplicate.

Statistical analyses were conducted with SPSS19.0. All the data are shown as mean ± SEM of at least three independent experiments. Significance was determined using one-way ANOVAs followed by post hoc tests; p < 0.05 was considered statically significant.